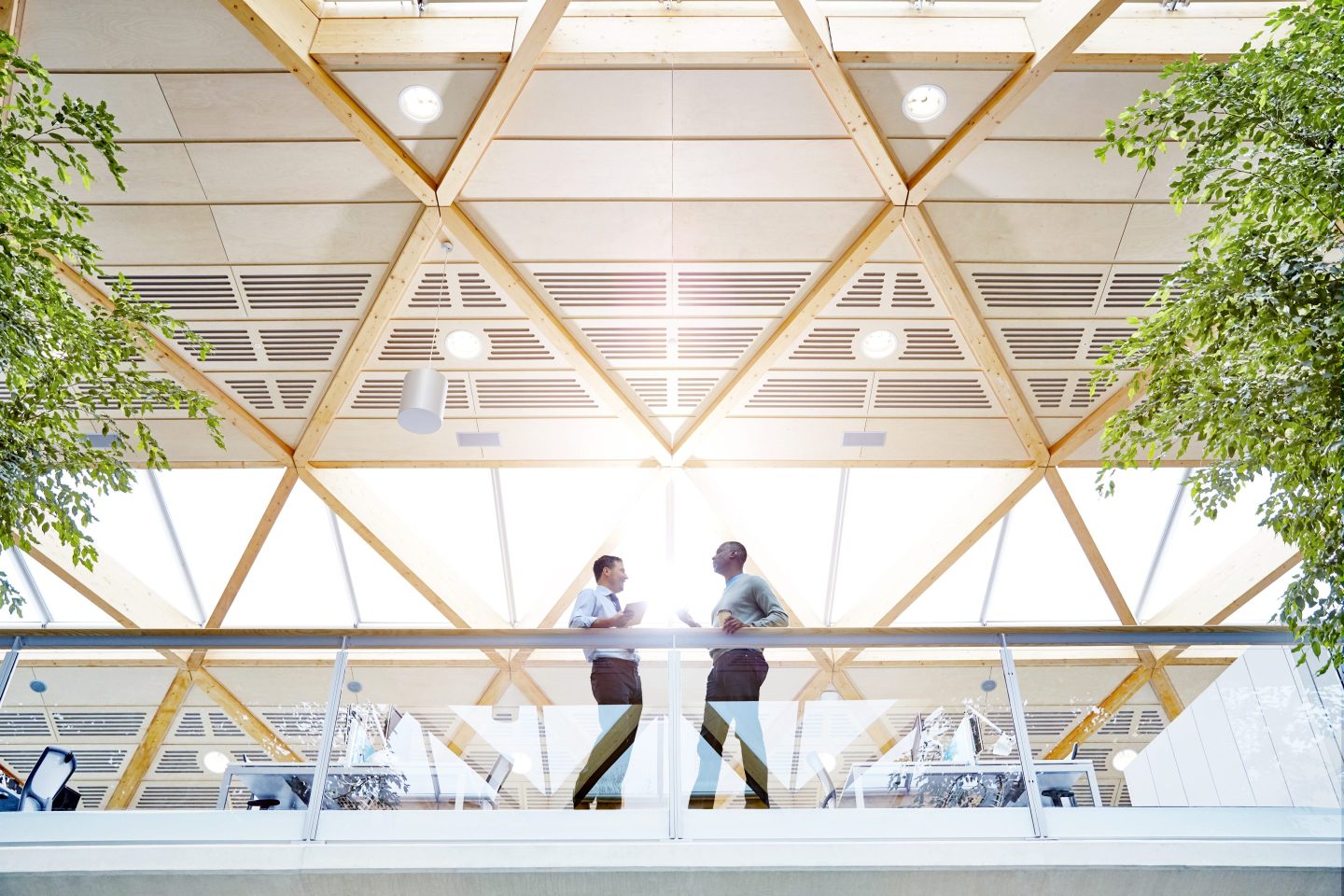 Companies are redesigning offices with comfortability, communal spaces, and more collaboration in mind as they bring employees back to the workplace.
GETTY IMAGES

As I’ve previously reported, companies are trying hard to entice workers back to the office. And they’re getting creative. Some are rethinking their office design to better reflect the shift to remote-first and hybrid work, adding greenery, onsite daycare centers, and communal gathering spaces. My colleague Aman Kidwai spoke to leaders at Marriott, Capital One, and Spotify to discuss how they’re redesigning the workplace as they adapt to flexible work models.

A few recurring themes stand out: Companies are prioritizing comfortability, communal spaces, and more conference rooms to foster collaboration and conversation. Here’s what Spotify’s head of workplace innovation and design had to say about its approach to office design:

“‘What we tried to do in every single office was bring in that social aspect, along with a focus on collaboration [spaces],’ Sonya Simmonds, head of workplace innovation & design, says. In other words, the office is far more people-centric.

The L.A. campus contains two main buildings. One houses a large cafe, several conference rooms, and focus areas for employees. Another holds the cafeteria, a venue with a stage, recording studios, and additional work spaces. Employees also have access to lockers, a necessity now that most employees don’t have assigned desks.

‘It’s about us being humans and being comfortable in the space,’ Simmonds says. ‘When you add better lighting, more foliage, more comfort, more acoustics, it starts to feel a bit more homely. It doesn’t make that seem like such a stretch from being in your home environment.’

In line with its renewed focus on collaboration, Spotify leadership received design input from employees representing each department at each office location. Every department occupies ‘neighborhoods’ that include features requested by the representatives but that are also adaptable. So if at first a neighborhood is evenly split between desks and collaboration areas, it can later be altered to include focus areas or additional desks. The department reps can choose from 10 elements, such as whiteboards or tables, to employ in their neighborhoods.“

Speaking of office space, companies are also investing in their offsite destinations in hopes of bringing back in-person collaboration. Last week, I spoke with Sandy Torchia, KPMG’s vice chair of talent and culture. Since assuming the role earlier this year, Torchia has focused on increasing engagement and connection among employees at the professional services firm. The company’s ability to gather again at Lakehouse, which she refers to as their “cultural home,” has aided in that endeavor. Lakehouse is KPMG’s 55-acre learning and development retreat center in Orlando, Fla. that opened right before the pandemic. Torchia shares what makes the space so unique and instrumental to in-person collaboration:

“It has state-of-the-art technology [and] state-of-the-art design. The rooms and the facilities are meant for collaboration. In addition to that, it has the best gym I've ever been to in my life, and there’s food everywhere all day long. Being able to bring our teams to Lakehouse to connect and collaborate and learn has been a blessing coming out of the pandemic… I was there this week and the room where we had our meeting had cushioned seats, whiteboards and things everywhere that you could write on—it was an experience for a collaborative meeting that really does get you standing, get you talking, get you thinking in a different way to be able to accomplish a great objective.”

- Getting the most out of younger employees requires nuance. They want flexibility along with structure to help them advance in their careers, according to a new Harris poll. Bloomberg

- A federal judge ordered Starbucks to reinstate seven employees the company fired from a store in Memphis for attempting to unionize. AP

- Fintech company Revolut announced it would rescind job offers from some recent graduates as it undergoes a “major cost-cutting review.” Financial Times

- Unsure of what to wear when you head back to the office? You’re not alone. Don’t be hard on yourself if you’re prioritizing comfort over style. HBR

Fortune’s Best. Regardless of industry, all the best places to work on the Fortune Best Workplaces list have one thing in common: Employees don’t consider their work “just a job.” —Roula Amire

A quiet legacy. Quiet quitting has been around for years, and the data suggest as much. The percentage of U.S. employees who reported feeling “not engaged” at their jobs has never dropped below 50% since 2000, according to Gallup poll data. —Nicholas Gordon

Teetering on the Fink. Larry Fink, the CEO of Blackrock, offered a new and somewhat unexpected reason for returning to the office. It could help reduce inflation by increasing productivity, he said. The investment firm is requiring employees to return to the office three days a week. —Nicholas Gordon

Weekly performance reviews. Annual performance reviews are one of the most challenging aspects of remote work. Companies can adjust to more sporadic communication by assessing people at regular intervals, rather than just once or twice a year. —Gleb Tsipursky