The U.K. could see almost 20% inflation by January, according to Citigroup 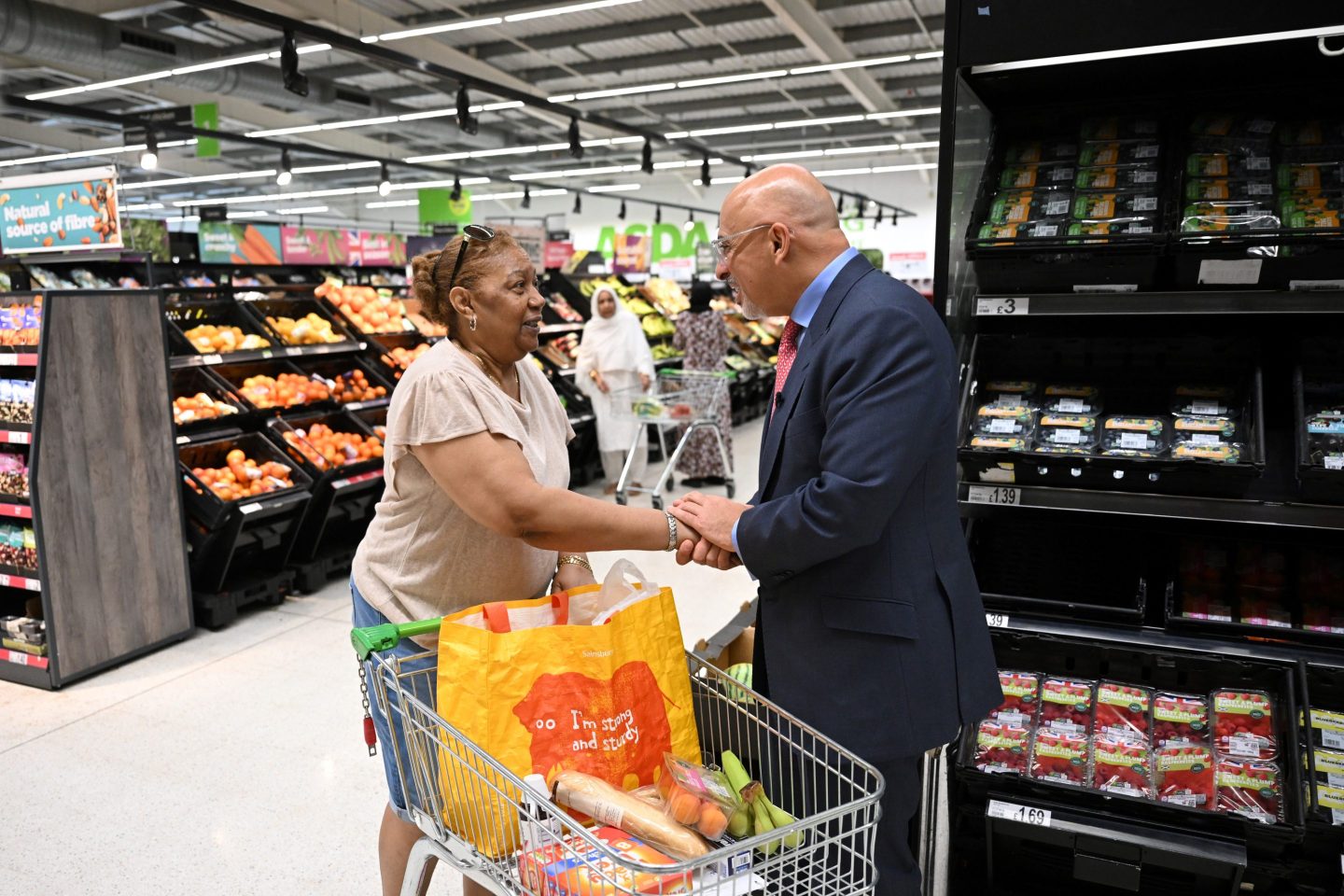 UK Chancellor of the Exchequer, Nadhim Zahawi (R) speaks to a customer during a visit of an ASDA supermarket to mark the first Cost of Living Payments being issued, on July 14, 2022 in London, England.
Justin Tallis - WPA Pool/Getty Images

Inflation has been a persistent problem in the U.S. since the pandemic began, and both consumers and investors are unhappy about it.

Some 86% of Americans see inflation as the most pressing issue facing the American economy today, according to a new study from JPMorgan Wealth Management.

But while inflation in the U.S. is showing signs of cooling, and may have even hit its peak in July, the situation for consumers in the U.K. continues to deteriorate as the country grapples with an ongoing energy crisis.

In July, inflation in the U.K. moved into double-digit territory for the first time in 40 years, with consumer prices soaring 10.1% from the same period a year ago, compared to 9.4% in June.

Now Citigroup is saying the situation will get worse before it gets better.

The U.S. investment bank’s economists, led by chief U.K. economist Benjamin Nabarro, revealed in a research note on Monday that they expect U.K. inflation to hit 18.6% by January. That’s more than nine times higher than the Bank of England’s (BOE) 2% target rate, and nearly six percentage points above the 13% figure that BOE officials said they expect by the end of 2022 earlier this month.

If Nabarro and his team are right and inflation tops 18% in 2023, it would mark the highest inflation rate in the U.K. in 50 years.

Why is inflation so bad in the United Kingdom?

Soaring food and energy costs have driven most of the U.K.’s consumer price increases over the past year.

Wholesale energy prices were already soaring worldwide in 2021 as pandemic restrictions faded, causing a rebound in demand. But the war in Ukraine has led to a natural gas shortage in Europe unlike any other in history, sending energy prices to record highs.

Since the start of the year, natural gas prices in the U.K. have jumped 96%, pushing electricity prices up 54%, according to the Office for National Statistics. As a result, 31 British energy companies have gone out of business over the last year. And the trend of soaring energy prices has only continued in recent weeks, with U.K. natural gas prices soaring 25% last week alone, while electricity prices jumped 7%.

Rising energy costs and an ongoing global heat wave have also pushed food prices to new heights in the U.K.

Food costs rose 12.3% in July from a year ago, including a 2.3% monthly jump that marked the fastest monthly increase in British food prices in 21 years.

Even when volatile food and energy prices are excluded from inflation data, core measures show consumer prices continued to rise far more than the Bank of England wanted in July. Core inflation reached 6.2% last month, compared to 5.8% in June.

U.K. consumers are facing a “cost of living crisis” as a result of this persistent inflation, forcing a third of British workers to consider taking a second job to make ends meet, while some have even turned to food banks in order to feed their pets.

The U.K.’s economy is coping with a slew of issues beyond inflation as well, including the planned resignation of Prime Minister Boris Johnson and trade disruptions from Brexit and COVID.

The situation is so bad that Saxo Bank’s head of macro analysis, Christopher Dembik, argued earlier this month that the only thing keeping the U.K.’s economy from looking like “an emerging market” is the lack of a currency crisis.

Even the Bank of England has projected the British economy will experience its most severe recession since the Great Financial Crisis of 2008 over the coming year. The central bank has raised interest rates three times this year to combat inflation, including a 50-basis-point rate hike earlier this month that was the largest since 1995. But so far, its actions have failed to slow inflation.

Citigroup’s Nabarro said that the question now is how government policy might be able to help counteract rising inflation, with a new prime minister set to take office on Sept. 5. But he argued there will likely only be a “limited offset” for headline inflation from government actions.

Citi now expects another 125 basis points of interest rate hikes to be announced at the coming three meetings of the Bank of England’s Monetary Policy Committee (MPC) due to the staying power of inflation.

“Even with the economy softening, last week’s data reaffirmed the continued risk of pass-through from headline inflation into wage and domestic price setting,” Nabarro said, according to CNBC. “With inflation now set to peak substantially higher than the 13% forecast in August, we expect the MPC will conclude the risks surrounding more persistent inflation have intensified.”