5 signs inflation could be quietly going down 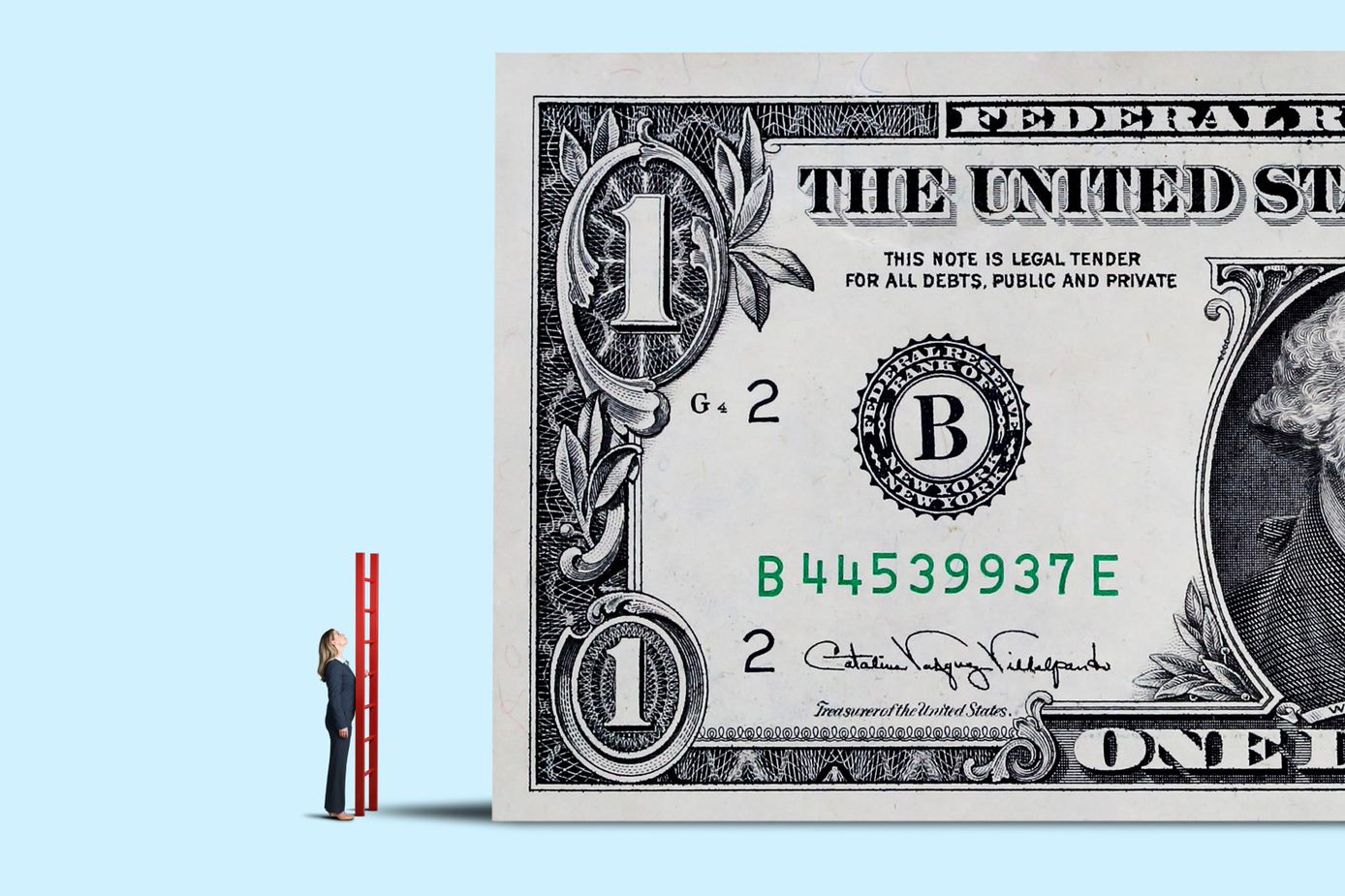 Whether it’s the cost of filling up at the gas pump, renting a new apartment, or just buying groceries, sky-high prices are forcing consumers into difficult choices, and they aren’t happy about it.

Americans now consider the rising cost of living to be the No. 1 issue facing the country today, according to a June ABC/Ipsos poll.

And it’s no wonder why. Inflation hit a fresh four-decade high in May, rising at an 8.6% annual rate. It’s gotten so bad that California decided to send a wave of inflation relief checks to millions of its residents—and some say things could get worse before they get better.

In a research note this week, Morgan Stanley’s chief U.S. economist Ellen Zentner said that she now believes inflation will hit a year-over-year high of 8.8% in June, owing to the rapid, nearly 10% rise in retail gas prices last month.

But the consumer price index (CPI), which is used to measure inflation, is a lagging indicator—meaning it quantifies price increases that have already taken place, not where prices will go in the future. And there are a few key signs that inflation may already be on its way down.

The Federal Reserve has hiked interest rates three times this year in an attempt to cool the overheated economy and bring down inflation without igniting a recession.

Only time will tell if its gambit is successful—but falling commodity prices, a cooling housing market, slowing consumer spending, and sinking forward-looking inflation expectations are all potential indicators that the U.S. economy is entering the beginning of the end of the post-COVID inflationary era.

As always, the story starts with oil. Despite a recent push toward green energy, America still runs on black gold.

In 2021, petroleum products alone accounted for 36% of U.S. energy consumption, according to the U.S. Energy Information Administration. Because of this, oil prices are a critical factor when it comes to determining the future path of U.S. inflation.

When the war in Ukraine began in late February, oil prices skyrocketed, and inflation went up right along with them. West Texas Intermediate (WTI) and Brent crude oil both soared to 13-year highs of $130 and $139 per barrel respectively in early March.

Over the past month, however, oil has broken its upward trend. WTI and Brent crude oil both traded below $100 on Wednesday and are now down roughly 20% since the start of June.

As a result of the decline, gas prices, which shot up to a record $5.01 per gallon in June, have now dropped for 21 consecutive days, and were sitting at just $4.77 per gallon on Wednesday. Falling gas prices should help to reduce inflation moving forward, but investment banks are split on the future path for oil.

Citibank sees oil prices falling to $65 if a recession lowers demand from consumers and businesses. But JPMorgan Chase analysts argued on July 1 that global oil prices could reach a “stratospheric” $380 a barrel if Russia decides to cut its crude oil output in response to Western sanctions.

For now, oil’s decline is good news for consumers worried about inflation, but geopolitical uncertainty from the ongoing war in Ukraine makes the future for this critical commodity uncertain at best.

Natural gas, metals, and lumber, too

In June, the Bloomberg Commodity Index, which measures a basket of critical commodities used by American businesses, witnessed its largest one-month drop since 2011, falling more than 11%. And so far this month, it’s down another 6%.

“Inflation looks to have peaked, and the slowing economy is pulling down commodity prices across the board,” Yung-Yu Ma, chief investment strategist at BMO Wealth Management, told Fortune. “The expectation of slowing demand is outweighing the currently tight markets and supply-chain disruptions.”

Natural gas has played a big role in the recent commodity price declines. Over the past month, natural gas futures sank nearly 38%, breaking the upward trend which began when Russia invaded Ukraine and kicked off a European energy crisis.

That’s a big deal because America burns through quite a bit of natural gas each year—the critical commodity accounted for 32% of the U.S.’s energy consumption in 2021, according to the U.S. Energy Information Administration.

Analysts at the market research firm Renaissance Macro Research said on Tuesday that they believe the decline in natural gas will help ease the pain of inflation moving forward.

“Natural gas prices have tumbled and this tends to show up [in] energy services CPI,” they tweeted. “Not only will U.S. consumers see relief at the gas pump, but household utility bills [will] likely moderate too.”

The institutional market research firm added that there is now a “reasonably good chance” that inflation will come down from its four-decade highs in July.

There are also signs from the metals markets that inflation is beginning to cool. Steel futures fell to $846 per ton on Wednesday, less than half of the $1,945 high seen last August, and copper prices are following suit.

Copper has long been considered a reliable economic bellwether because of its broad use cases in dozens of industries. The metal has been so good at predicting recessions and the path of inflation that metals traders often call it “Dr. Copper.” And copper prices? They’re now down over 23% just this month, moving to a near 20-month-low on Wednesday.

Lumber prices have also dropped from their March 3 high of $1,464 per thousand board feet to just $648 as of Wednesday. That’s an important indicator that there could be a manufacturing and construction slowdown, particularly in the housing market, which would likely drag inflation down.

Nick Grandy, a construction and real estate senior analyst at the consulting firm RSM, told Fortune that a return to the record demand for building products seen in 2021 isn’t likely anytime soon as well.

“With the Federal Reserve raising interest rates to tame inflation, demand for building products will continue to ease as homebuilders look to cope with [housing] demand cooling to more normalized levels,” he said.

In 2021, the dramatic price increases seen in the critical commodities listed above foreshadowed inflation’s rise. Now they could be signaling consumer prices are headed back down to earth.

Another sign that sky-high consumer prices may be on their way down can be seen in some of the forward-looking measures of inflation used by Wall Street.

The key inflation gauge rose to an eight-year high of 2.68% in April, but has recently dropped back down to just 2.08%. That means market participants are expecting inflation to come down to near the Federal Reserve’s 2% target rate five years from today.

Similarly, the 10-year breakeven inflation rate, which measures inflation expectations over the coming 10 years, has come down from its late-April highs in recent weeks.

The 10-year breakeven inflation rate is calculated by comparing 10-year nominal Treasury yields with 10-year Treasury Inflation-Protection Securities (TIPS) yields that are tied to CPI. It works to illustrate the predictions of bond market investors about the future path of inflation.

When investors believe inflation will be high over the coming decade, they are more likely to buy 10-year TIPS, which, as the name suggests, offer protection against inflation. When they do this, it drives the yield on TIPS down, which causes the breakeven inflation rate to rise.

Right now, the opposite is happening, which could be a sign the bond market believes inflation will soon hit its peak.

There are also signs that the Federal Reserve’s aggressive interest rate hikes are working to cool the once red-hot housing market.

The average 30-year fixed mortgage rate, the most common kind of mortgage in America, has jumped from 3.1% to 5.7% over the past six months because of the Fed’s policies. As a result of the rising costs of borrowing, there are signs of slowing demand for housing, and inventory is rising rapidly.

U.S. home sales fell for the fourth straight month in May, while the inventory of homes actively for sale in the 50 largest U.S. cities increased by 27.9% year over year in June.

“Even though the Fed just started to move rates up, we’re already seeing evidence that its moves are slowing the housing market as affordability falls,” Mace McCain, chief investment officer at Frost Investment Advisors, which manages $4.7 billion in assets, told Fortune. “Higher rates are having the predictable effect on mortgage applications, and new home sales are slowing.”

On top of that, in the first quarter of this year, Moody’s Analytics estimated the median regional housing market was “overvalued” by 23%. That’s a 20.9 percentage point increase from their “overvalued” predictions in 2020, and it could be a sign that housing prices are about to fall.

This toxic mix of rising inventory, falling sales, and increasing costs has led to the Great Deceleration in the housing market.

“The market is already correcting. Higher home prices and higher mortgage rates rose to the point that demand seized up in many parts of the country. Home prices are already adjusting down, and we could see that continue until consumer confidence and affordability resets,” Ali Wolf, chief economist at Zonda, a housing market research firm, told Fortune’s Lance Lambert in June.

Throughout the pandemic, record fiscal stimulus including stimulus checks, PPP loans, and enhanced unemployment benefits helped to buoy consumer spending and allowed Americans to sock away around $2.5 trillion in excess savings.

But now there are signs U.S. consumers’ strength is fading. U.S. household spending slowed in May, rising by just 0.2%, the smallest monthly gain in 2022 and a far cry from the 0.6% monthly jump seen in April.

Additionally, the personal savings rate, which measures savings as a percentage of disposable income, fell to just 5.4% in May, well below pre-pandemic levels. That’s a sign consumers are being forced to spend more of their disposable income just to get by, which will likely lead to reduced spending on goods and services, thereby reducing inflation.

There has also been significant wealth destruction in the U.S. over the past six months with the fall of stocks, bonds, and cryptocurrencies. And when people lose money investing, they have less to spend in the real economy.

The crypto market has shed over $2 trillion in value in 2022 alone, and U.S. stocks have lost as much as $15 trillion in value from their recent peak, Bloomberg reported on Wednesday. Retail investors have been particularly hard hit. Meanwhile, the bond market has lost roughly 10% of its value this year alone, marking the worst year for debt markets since 1842.

All of this has created a decline in U.S. consumers’ wealth, thereby reducing their overall purchasing power, which could lead inflation to fall.

“With equity market declines and potential for housing prices to fall, we’ve already seen a significant tightening of financial conditions. This decline in wealth is causing a profound cooling on consumer spending,” McCain said. “Other commodities, including oil, have come off their highs since early June, and consumer demand for goods and services also is falling. Taken in sum, all of these changes should begin to cool headline inflation.”