Pinterest’s CEO couldn’t capitalize on the company’s biggest advantage. Can a Google executive cash in? 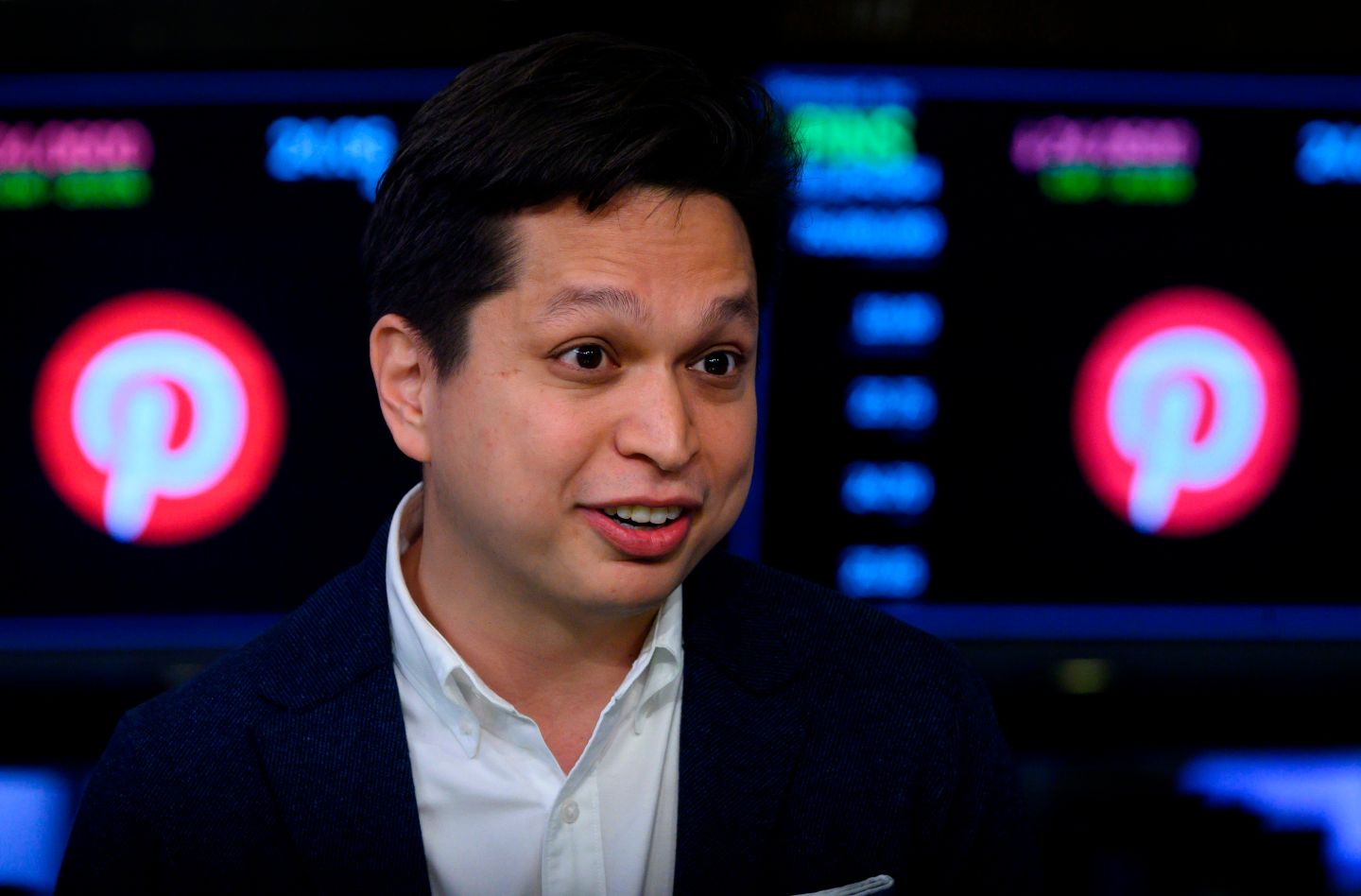 Pinterest co-founder and CEO Ben Silbermann, is stepping down after 12 years. Google's head of commerce, Ben Ready, will take over as Pinterest's chief exec with a focus on stewarding the company into e-commerce.
Johannes Eisele—AFP/Getty Images

It would be grossly unfair to classify Pinterest co-founder and CEO Ben Silbermann’s run atop the digital scrapbooking company as a business disappointment. During Silbermann’s 12-year tenure, Pinterest reached 433 million monthly active users, $2.6 billion in annual revenue, and a $13 billion market cap.

For all his success in building Pinterest into a “safe and happy place for inspiration, self-improvement and salted caramel cookie recipes,” as The New York Times once eloquently described the platform, Wall Street will inevitably remember the latter days of Silbermann’s reign as a missed opportunity.

Despite building a sizable audience with plenty of disposable income—namely, suburban moms and wedding-planning millennials—Pinterest never fully cashed in on that lucrative following. More to the point: Silbermann and his team missed a gaping window to pioneer the social commerce space in the U.S., where shoppers treated Pinterest as a place to find—but not buy—their favorite goods.

Instead, Pinterest remains an ad-driven business—and not a particularly lucrative one at that, relative to its Big Tech peers.

Silbermann and Pinterest’s board tacitly acknowledged this shortcoming Tuesday. In a sign of the company’s online shopping aspirations, Pinterest appointed Bill Ready, Google’s president of commerce and payments, as the new CEO. In interviews with The Wall Street Journal, the departing and arriving chief executives alluded to the company’s e-commerce plans, with Silbermann stating that Ready is “actually going to be a better CEO than I am for this next chapter.”

Unfortunately for Ready, he’ll be playing catch-up at Pinterest.

Under Silbermann’s watch, Pinterest accumulated a devoted following with enormous money-making potential. A 2019 survey by Cowen and Company found that 47% of Pinterest’s U.S.-based visitors used the platform to find or shop for products. The four other platforms surveyed—Facebook, Instagram, Snapchat, and Twitter—all scored at 15% or lower.

Silbermann and Wall Street analysts were well aware of the opportunity to convert digital looky-loos into buyers, with Pinterest earning some kind of finder’s fee. In its IPO prospectus from 2019, Pinterest officials said they plan to “improve the utility of our service by making it easier for Pinners to go from inspiration to action—in particular, we want to make Pinterest more shoppable.” Around the same time, Insider Intelligence analyst Andrew Lipsman noted that Pinterest “offers users a venue for creative and aspirational pursuits that aligns particularly well with shopping content.”

Those aspirations, however, never quite materialized.

In its 2021 annual report, Pinterest said “substantially all” of its revenue derived from advertising. Pinterest earned just $5 in revenue per user in the U.S. and Canada during the first quarter of 2022, falling behind superior advertisers like Facebook ($48.29), Twitter ($15.59, in the U.S. only), and Snap ($7.77, in all of North America).

A report by The Information in March suggested that Pinterest’s underwhelming growth traced back, in part, to Silbermann’s leadership. The news outlet found that Silbermann’s deliberate style contributed to two key e-commerce acquisitions, including a potential $500 million purchase of Verishop, falling through in recent years. Silbermann’s team also didn’t prioritize shopping features, waiting until early this year to launch an option to buy products directly on its platform.

Pinterest also faced high-profile gender and racial discrimination claims during Silbermann’s tenure, including allegations that he sidelined women in leadership roles. The company agreed to more than $70 million in settlements and instituted sweeping workplace policy changes.

In fairness to Silbermann’s business acumen, few companies have been able to crack the difficult social commerce puzzle in the U.S. According to eMarketer estimates, only 4% of online retail shopping emanated from social networks in 2021, a marginal increase from 3.2% in 2019.

Yet in a highly competitive ecosystem that prizes innovation, Silbermann had the chance and the audience to craft Pinterest into something bigger. Now, with Pinterest usage on the decline from its pandemic heights, it’s Ready’s job to stitch the business back together.

A swipe at China. Federal Communications Commissioner Brendan Carr disclosed Tuesday that he’s called on Apple and Google to remove TikTok from their respective app stores due to data privacy issues. In a letter sent last week to the two companies’ chief executives, Carr, a Republican appointee, argued that a recent BuzzFeed News article about the Chinese app’s data collection practices represented an “unacceptable national security risk.” Political leaders from both sides of the aisle have raised concerns about the ByteDance-owned app, though congressional and White House officials have stopped short of banning it in the U.S.

Feet to the furnace. Semiconductor company executives continued Tuesday to pressure Congress to pass tens of billions of dollars in subsidies for the industry, as frustration mounts over stalled legislation. A top Taiwanese minister told The Washington Post that the world’s largest chip fabricator, Taiwan Semiconductor Manufacturing Company, would slow construction on an Arizona-based factory if Congress doesn’t allocate the funds. In a separate statement, Intel CEO Pat Gelsinger warned that his company could choose to expand in Europe, rather than the U.S., without more government support.

Out of options. Court officials in the British Virgin Islands have ordered the liquidation of cryptocurrency hedge fund Three Arrows Capital, which couldn’t meet its obligations following a crash in crypto prices, Sky News reported Wednesday. It was not immediately clear how Three Arrows’ creditors would be impacted by the selloff. Various estimates suggested the firm managed multiple billions of dollars in assets, many of them highly leveraged, before the sector-wide drop in values and collapse of two tokens crushed the digital assets market.

Driving them out. Tesla laid off about 200 workers on the company’s Autopilot team, which helped develop the electric vehicle manufacturer’s autonomous driving technologies, Bloomberg reported Wednesday. The job cuts mostly involved hourly workers, despite comments earlier this month from Tesla CEO Elon Musk suggesting that salaried staff would see layoffs and hourly employee headcounts would increase. Tesla also shut down a Bay area facility where many of the laid-off employees worked.

Bad intelligence. When a Google engineer claimed earlier this month that a company chatbot had become sentient, some artificial intelligence experts couldn’t help but groan. The reason: many ethicists and researchers believe the public perceptions about A.I. are increasingly out of step with reality, The Wall Street Journal reported Wednesday. The disconnect follows several years of grand proclamations and promises by the world’s largest tech companies, including Alphabet, Meta, and Tesla. Many of those A.I.-focused efforts, however, haven’t come to fruition or remain years away from common use.

With recent leaps in the technology, companies have developed more systems that can produce seemingly humanlike conversation, poetry and images. Yet AI ethicists and researchers warn that some businesses are exaggerating the capabilities—hype that they say is brewing widespread misunderstanding and distorting policy makers’ views of the power and fallibility of such technology.

“We’re out of balance,” says Oren Etzioni, chief executive of the Allen Institute for Artificial Intelligence, a Seattle-based research nonprofit.

The crypto crash resembles the Panic of 1907, with Sam Bankman-Fried in the role of J.P. Morgan, by Alex Tapscott

How Putin’s invasion of Ukraine could drive advances in energy technology, by Dakin Sloss

Crime doesn’t pay as well. There’s at least one silver lining from this crypto winter: North Korea is feeling the freeze. Reuters reported Wednesday that the crash in cryptocurrency values has severely dented the value of hundreds of millions of dollars in crypto stolen by the autocratic regime. South Korean government officials told Reuters that their northern neighbor could struggle to fund some of its weapons programs if crypto prices continue to crater. U.S. authorities believe North Korean hackers were responsible for a $615 million crypto heist launched against the blockchain project underpinning the Axie Infinity game, one of the largest digital asset thefts in history.