‘With sorrow, we dissent’: What comes next after the fall of Roe 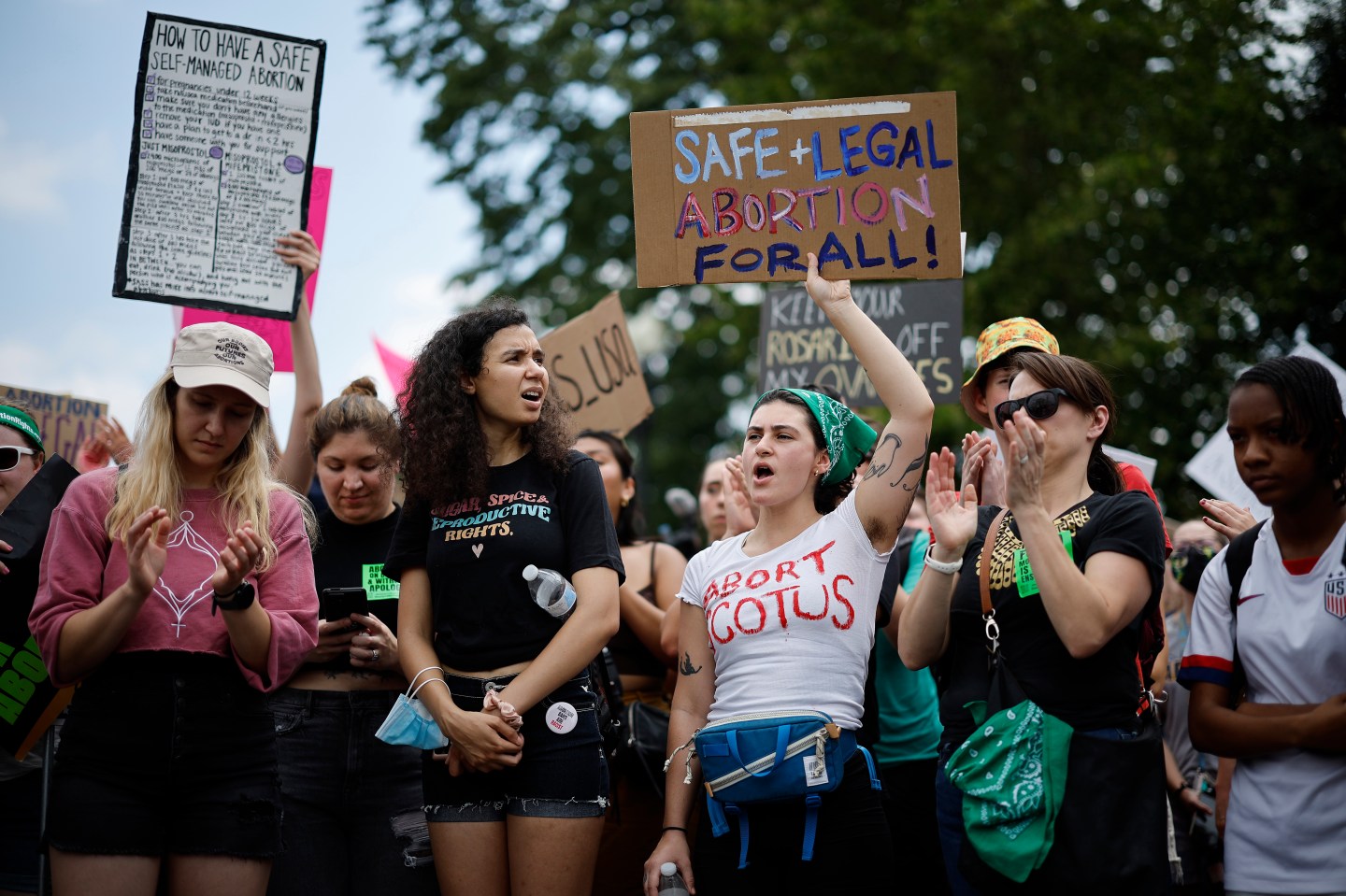 Thousands of abortion-rights activists gather in front of the U.S. Supreme Court after the Court announced a ruling in the Dobbs v Jackson Women's Health Organization case on June 24, 2022 in Washington, DC. The Court's decision in Dobbs v Jackson Women's Health overturns the landmark 50-year-old Roe v Wade case and erases a federal right to an abortion.
Chip Somodevilla/Getty Images

Good morning, Broadsheet readers! The end of Roe v. Wade is here: Businesses are responding, abortion providers prepare for their new reality, and abortion rights supporters mourn—and come up with a plan of action.

– What comes next. Two months to prepare didn’t make it any easier. The Supreme Court on Friday voted 6-3 to reverse Roe v. Wade, overturning 50 years of precedent, revoking a constitutional right, and allowing states to make abortion illegal as early as fertilization.

The decision in Dobbs v. Jackson Women’s Health Organization, nominally over Mississippi’s abortion ban, came down as expected, immediately making abortion illegal in large swaths of the country. Clinics scrambled to perform their last abortions and shut down operations to comply with now-in-effect trigger laws. Patients with procedures booked faced a whirlwind of emotions as they tried to access care—or confronted the reality that they couldn’t. And women, girls, people who can become pregnant, and people who care about reproductive rights everywhere worried for the future of the United States.

While the conservative justices’ decision leaked in May, new pieces of writing were released along with the ruling last week. First, the liberal justices’ dissent. Justices Stephen Breyer, Elena Kagan, and Sonia Sotomayor wrote a dissent that spoke to the gravity of the moment. In dissents written over the past several weeks, Sotomayor especially has expressed not just an opposing view, but deep worry for the state of the Supreme Court. “With growing concern for where this Court will lead us next, I dissent,” she wrote in Maine’s separation of church and state case just two days before Dobbs was released.

In their Dobbs dissent, the three liberal justices essentially told the public, “You’re not hysterical,” as Irin Carmon wrote for New York Magazine. “One result of today’s decision is certain: the curtailment of women’s rights, and of their status as free and equal citizens,” the justices wrote.

“[The Court] says that from the very moment of fertilization, a woman has no rights to speak of,” they went on to say. They added: “A State can force her to bring a pregnancy to term, even at the steepest personal and familial costs.”

The potential—even likely—consequences for other civil rights in this country are clear, the three justices argued. Conservative Justice Clarence Thomas himself made that argument in a solo concurring opinion. He wrote that the Court “should reconsider all of this Court’s substantive due process precedents,” naming the three cases that guarantee access to contraception, the right to same-sex marriage, and the right to same-sex relationships.

So now what? Rep. Alexandria Ocasio-Cortez has been a leading voice, urging a plan of action beyond outrage and encouraging Americans to vote in the midterm elections. The Biden administration and Congressional Democrats can open abortion clinics on federal land in states that have banned abortion, and codify into law rulings like those Thomas mentioned in his opinion, she argued. Businesses, of course, are capable of doing more than funding travel costs, which many have committed to doing, like taking their jobs and tax dollars out of states that ban abortion (for more on the latest from businesses, see below).

For now, many people are feeling sadness and despair. But after mourning, comes action. As the liberal justices wrote: “With sorrow—for this Court, but more, for the many millions of American women who have today lost a fundamental constitutional protection—we dissent.”

THE END OF ROE

- Patagonia says protest. Patagonia is going beyond travel benefits, promising to bail out employees who are arrested at abortion rights protests. Bloomberg

- 'Move them.' The fate of frozen embryos in red states that have now banned abortion is unclear, Fortune senior editor Beth Kowitt reports. "If you can move them, move them," one expert says. Fortune

- Worse than before. "We're not going back to the time before Roe. We're going somewhere worse," writes Jia Tolentino. New Yorker

- Dangerous shortage. Some OB/GYNs are rethinking their careers after the fall of Roe, which threatens to make a nationwide doctor shortage even worse. Fortune

- Internal communications. Read the memos companies like Disney, JPMorgan, and Goldman Sachs sent their employees about the reversal of Roe. Fortune

- Planned and prepared. Revisit our May interview with Planned Parenthood president and CEO Alexis McGill Johnson on how she's ensuring her own organization survives this period, and the advice she offers business leaders who are unsure what to do. Fortune

- On the court. Wimbledon is kicking off this week. Serena Williams discusses her return to the grass court—her first professional singles' match since the same Grand Slam a year ago. Emma Raducanu, who burst into tennis's top tier when she won Wimbledon at 18 years old one year ago, has struggled with injuries but is back on the court.

- Free advertising. The same day Roe fell in the U.S., Germany ended a Nazi-era prohibition on advertising abortion services. The law had criminalized doctors who shared information about how to terminate a pregnancy. New York Times

The voices of men affected by abortion New York Times

"The song is for the justices: Samuel Alito, Clarence Thomas, Neil Gorsuch, Amy Coney Barrett, Brett Kavanaugh. We hate you!"

- Olivia Rodrigo, before performing Lily Allen's song "F*** You" alongside the pop star at Glastonbury Festival