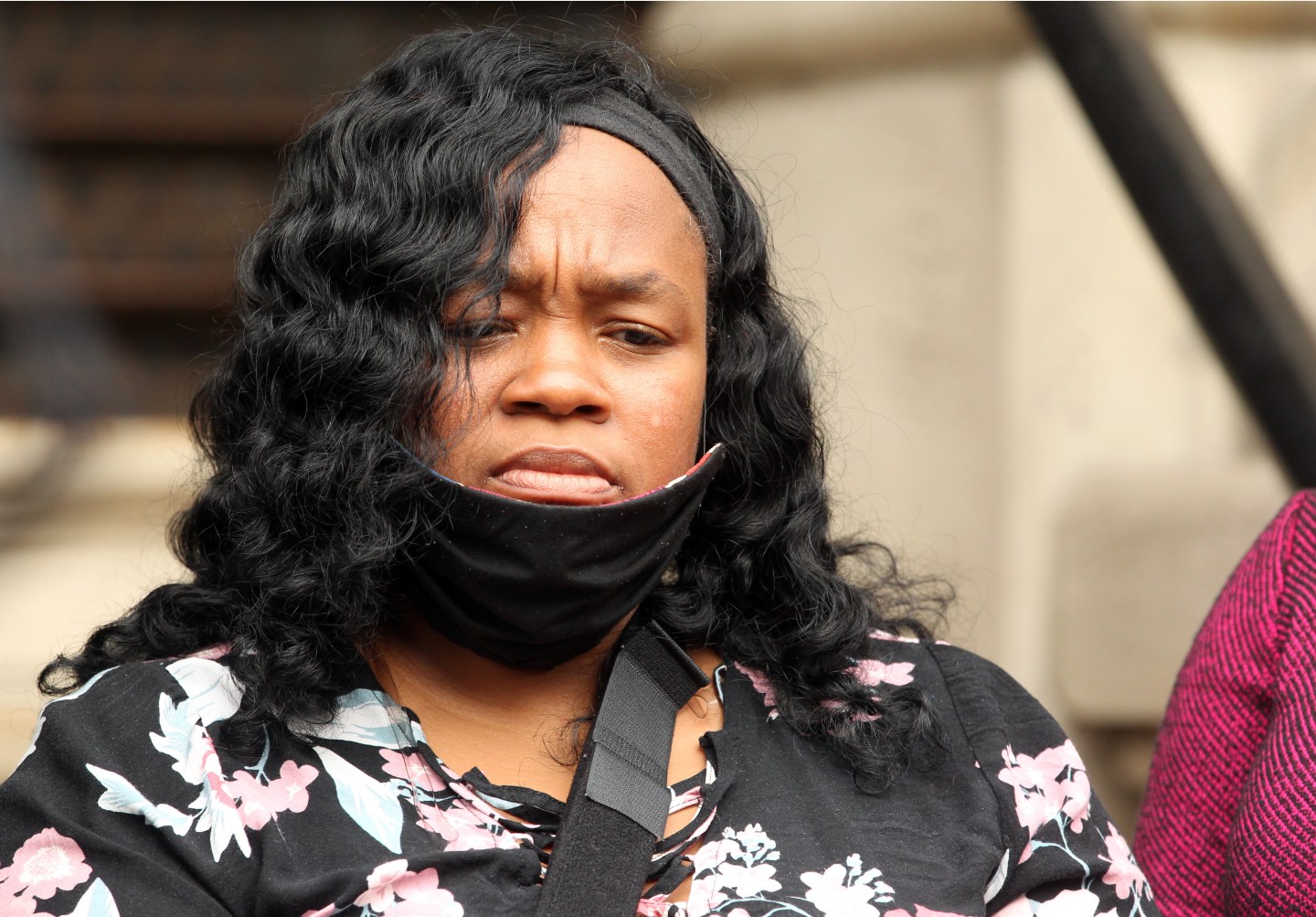 OUISVILLE, KY - AUGUST 13: Breonna Taylor's mother Tamika Palmer listens during a press conference over the speed of the investigation of her daughter's death as attorney Benjamin Crump and co-counsel Lonita Baker addresses the media outside Louisville City Hall on August 13, 2020 in Louisville, Kentucky.The attorneys and family are upset with the lack of action by city officials during the 150 days since Breonna Taylor was fatally shot by Louisville Metro Police officers. (Photo by John Sommers II/Getty Images)
John Sommers II—Getty Images

– Cover to cover. The September issue of Vanity Fair is out—and features a stunning cover image of Breonna Taylor as painted by Amy Sherald, the artist perhaps best known for her portrait of Michelle Obama. Taylor is, of course, the 26-year-old Black EMT who was shot and killed in her home by Louisville police in March. The magazine also includes a piece by Ta-Nehisi Coates, based on a series of interviews with Taylor’s mother Tamika Palmer; an oral history of the protest movement that followed the police killing of George Floyd; and a glorious photo portfolio of Black activists and artists.

There are a lot of reasons to love this issue, but I hope you’ll allow me to focus on a couple that jumped out to me as a magazine editor. The first has to do with Vanity Fair itself. I think it’s fair to say that VF spent most of its existence chronicling the lives of the rich, famous—and white. But the magazine has undergone a transformation under the reign of Radhika Jones, who started embossing her stamp on the publication when she put Lena Waithe on her first cover as editor-in-chief. Under her eye—and that of Coates, who served as guest editor—this issue goes beyond surface level virtue signaling, marshaling the work of Black photographers, Black writers, Black artists, and Black clothing designers. As someone who grew up reading the Vanity Fair obsessed with royals and socialites, it’s an incredible breath of fresh air.

The second reason rests on a truism about journalists: we love “scoops” and “exclusives”—the desire to be first is in our blood. But you may recall, O: The Oprah Magazine, also put Taylor on the cover of its September issue—and featured an essay, penned by the mogul herself, that included an interview with Palmer. Given that, you might have expected VF to pivot, to say, eh, Oprah did it, let’s move on.

The fact that it didn’t is, to me, proof that what happened to Taylor—being gunned down in her own bed, by men who are still walking free—is not just going to just drift away as the media moves on to the next headline. The world is not done celebrating her life or telling her story or calling for justice in her name. “With COVID happening, it feels like they want to to just sweep this under the rug real quick,” Palmer tells Coates. “But we will not let this go.”

Yes, a magazine cover is just a piece of paper (or in this case, two). But what it represents is deeper, and far more lasting. As Jones says of her hopes for the issue: “An object to push back against ephemerality. A way to remember, and a sign of things to come.”

- Party on. The Republicans kicked off their convention last night. Former UN Ambassador Nikki Haley defended President Donald Trump's approach to foreign policy and assured viewers that "America is not a racist country." RNC Chairwoman Ronna McDaniel argued that "nice guys like Joe" prioritize China and Iran over the U.S., while Kimberly Guilfoyle, a top Trump campaign official and girlfriend of the president’s oldest son, warned that Democrats "want to steal your liberty, your freedom." Washington Post

-Three more. Our colleague Maria Aspan continues her coverage of the cancer linked to textured breast implants made by Allergan and others. New FDA data reveals that three more women have died from the disease—all within a six-month period starting just weeks before the implants were recalled. Fortune

- Putting her stamp on the hearing. Rep. Katie Porter (D–Calif.) took center stage during U.S. Postmaster General Louis DeJoy's testimony in front of the House Oversight Committee yesterday. Porter quizzed DeJoy on how much it costs to mail a postcard and how many people voted by mail in the last election; DeJoy, who appeared in front of the committee to answer questions about recent changes to the Postal Service, didn't know either answer. Mother Jones

- Family planning. The coronavirus pandemic has delayed adoptions and fertility procedures—but it's also led some would-be parents to move up their family plans. According to a Fortune survey, 34% of those planning on having kids are going ahead sooner than they expected because of the crisis. Fortune

MOVERS AND SHAKERS: Valerie Jarrett joins the board of Sweetgreen.

- Female founder first. Brynne Kennedy is running for Congress against a 10-year GOP incumbent in a tough California district. But if she wins, she would be the first female tech founder and CEO to serve in Congress. The former Topia chief executive discusses the possible milestone: Fortune

- Health scare. Gymnast Sunisa Lee shares what it was like when she thought she had the coronavirus, sick with a 103-degree fever and isolating upstairs from her family members. The 17-year-old was a favorite for the Tokyo Olympics and is just getting back to her gym now. New York Times

- One to watch. Rep. Xochitl Torres Small, a Democrat, faces a tough reelection campaign in New Mexico, competing in November against her 2018 Republican opponent, Yvette Herrell. The race is being eyed by party insiders on both sides as a sign of what awaits the districts that flipped blue in the midterms. New York Times