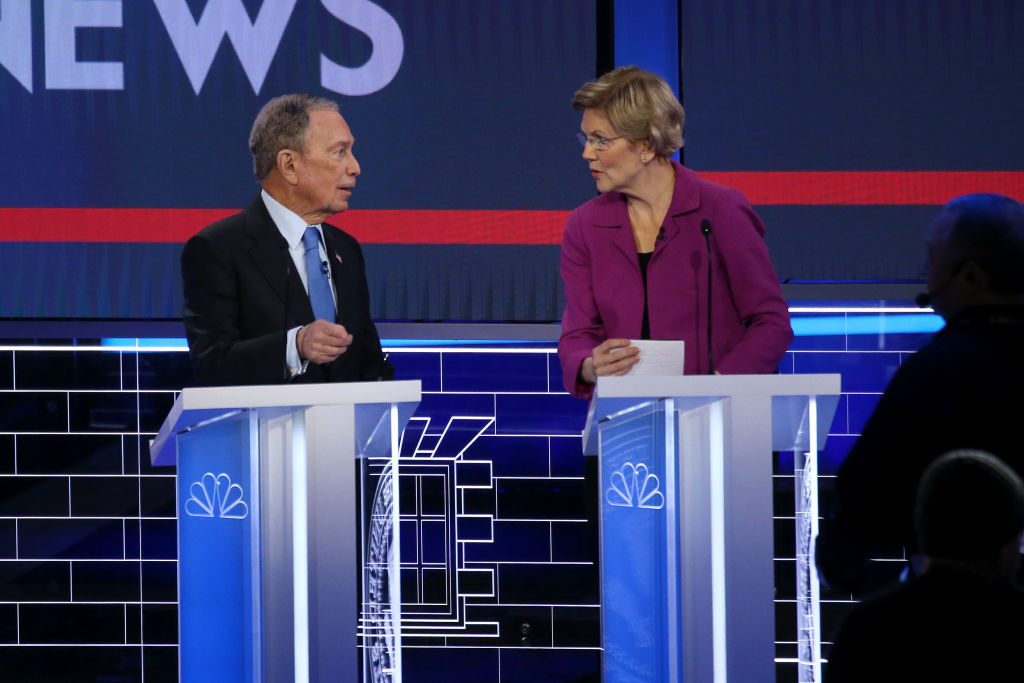 Good morning, Broadsheet readers! Les Wexner is stepping down at L Brands, women are likely out of the running to replace Angela Merkel, and non-disclosure agreements go primetime. Have a terrific Thursday.

– The great NDA debate. If you predicted at the start of primary season that non-disclosure agreements would be a major talking point of the ninth Democratic debate, well, you saw coming what the rest of us missed.

But there it was last night: the clunky topic of NDAs, lobbed like a grenade into a heated Democratic debate, or, more specifically, into a heated debate between Sen. Elizabeth Warren and late entrant Michael Bloomberg.

It came up as Warren, fading in the polls, berated Bloomberg for his alleged history of misogynist remarks and sexist behavior (claims Bloomberg has defended himself against) and for his reliance on NDAs that have kept accusers from speaking out.

“I’d like to talk about who we’re running against: a billionaire who calls women fat broads and horse-faced lesbians,” Warren said. “And no, I’m not talking about Donald Trump. I’m talking about Mayor Bloomberg.” She insisted that Bloomberg reveal how many NDAs he’s signed and release his accusers from their obligations to stay silent.

“So, Mr. Mayor, are you willing to release all of those women from those non-disclosure agreements so we can hear their side of the story?” she said.

Bloomberg refused. “None of them accuse me of doing anything other than maybe they didn’t like a joke I told,” he said. “These are agreements between two parties that wanted to keep it quiet, and that’s up to them. They signed those agreements, and we’ll live with it.”

Warren’s attack put in stark terms the general criticism of NDAs; that they are tools to hide alleged bad actors’ misbehavior from future victims, from future employers, and—in this case—from future voters.

The legal mechanism has its defenders; they argue that confidentiality entitles alleged victims to favorable outcomes that would otherwise be hard to win and guarantees the privacy that many claimants crave. But the #MeToo movement has revealed how NDAs muzzle women who allege sexual harassment or misconduct, so much so that some lawmakers have proposed banning their use in such cases.

Like forced arbitration, NDAs are part of the corporate machinery that can sustain toxic workplaces and unshackle repeat offenders. They have come under fire before, but never to the extent that they did on national TV last night. Bloomberg will certainly face more questions about NDAs; others that employ the secrecy agreements shouldn’t escape scrutiny either—and they should be prepared to provide a more convincing defense than Bloomberg mustered last night.

-Wexner walks. L Brands CEO and chairman Leslie Wexner has announced that he is stepping down—and that the company will sell a majority stake in Victoria’s Secret, which the NYT calls L Brands' "crown jewel," to a private equity firm. The move comes in the wake of questions about Wexner's ties to Jeffrey Epstein and allegations of harassment and misogyny at the company. New York Times

- Mega-merger. Franklin Templeton will buy Legg Mason in $6.5 billion deal including debt, meaning that the U.S. asset manager now controls more than $1.5 trillion in assets. Franklin Templeton CEO Jenny Johnson will lead the combined business. Johnson only took over as chief executive of Franklin this month. The acquisition is about "having an all-weather product line-up and world-class distribution platform," she says. Financial Times

- Take her advice. E. Jean Carroll, the writer and Elle advice columnist who wrote in her recent book that President Trump raped her in the mid-1990s (he denies the charge), says that the magazine fired her from her position of almost 30 years after she made the allegation. "I don't blame Elle. It was the great honor of my life writing 'Ask E. Jean.' I blame [Trump]," Carroll wrote on Twitter. Elle's owner Hearst has not responded to media outlets' requests for comment. Carroll is suing Trump for defamation, which she ties to the end of her employment: she says the magazine fired her "because Trump ridiculed my reputation, laughed at my looks, & dragged me through the mud." NBC News

- Out of the running. As Angela Merkel's carefully considered succession plan falls apart in Germany, Fortune's David Meyer breaks down who is in the running to take over as the face of the Christian Democratic Union, and maybe as Chancellor. Now that onetime heir apparent Annegret Kramp-Karrenbauer is out of the running, the remaining likely candidates are all men. Fortune

- Clijsters's comeback. This week, tennis star Kim Clijsters played the first match after coming out of her second retirement. A 36-year-old mother of three, Clijsters says training and competition became a form of self-care after seven years mostly at home with her children. "I’ve been a full-time mum, and I love it. I really, really do,” she said in her announcement video last fall. "But I also love being a professional tennis player. Honestly, I miss that feeling. So what if I tried to do both?" Clijsters lost her match on Monday, but her comeback is just starting. The New Yorker

- Reproductive health on PR. The Clinton Foundation has been putting resources toward aid for pregnant women and new mothers in Puerto Rico. Hillary Clinton recently spent time on the island as part of those efforts, and talks to Glamour about why. "The press has never taken reproductive health seriously,” she says. “They don’t raise it, they don’t understand its importance. We have to do a better job of speaking up and educating people about why this is a critical issue for women.” Glamour

- Work from home. Anna Liu was a journalist at Q Daily in Beijing, when she was laid off in December and returned home to Wuhan to celebrate the Lunar New Year with her family. She ended up quarantined as the city shut down amid the coronavirus outbreak—but she's been using her skills as a reporter, even though she's confined at home, to help the city's citizens access information about the disease, file complaints, and find treatment. She says her career clashing with Beijing's bureaucracy prepared her for the challenge. New York Times

Harry and Meghan's use of the word 'Royal' being reviewed, source says CNN

"I would have thought the car would be covered in tampon ads and Massengill and whatever."

-Racecar driver Jackie Heinricher on the sponsors she thought would back her team of female drivers.