Angela Merkel is on her way out. Meet her potential replacements 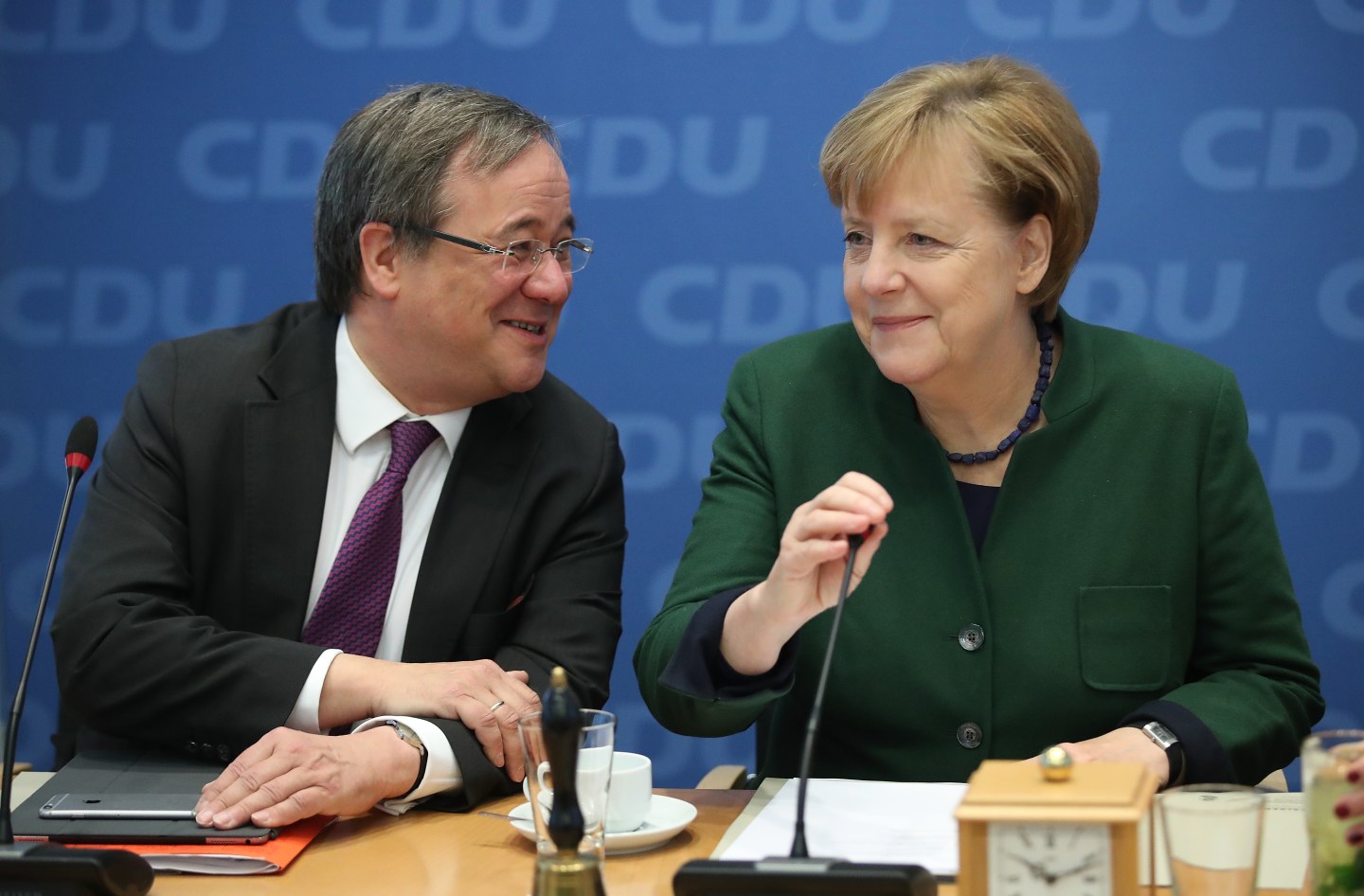 After a decade and a half in power, Angela Merkel is on her way out as Germany’s chancellor. But who will follow, and when?

Merkel’s tenure has largely been defined by her calm, cautious nature—characteristics that have made Germany an oasis of stability in a Europe that is undergoing an identity crisis. Those same traits have also opened her up to accusations of indecisiveness and lack of ambition on the part of the continent’s most powerful nation.

So, it is time for both Merkel and Germany to move on. Federal elections are planned for 2021; she decided in 2018 that she would step down at that point. She resigned as leader of her conservative Christian Democratic Union (CDU) party, which narrowly chose as her successor Annegret Kramp-Karrenbauer, known popularly as AKK or, somewhat ungenerously, “Mini-Merkel.”

But now AKK won’t be the CDU’s candidate next year either. Following a year of stumbles, she was finally undone this month by a political firestorm in which the CDU in the state of Thuringia entered a tacit alliance with the increasingly prominent, far-right Alternative for Germany (AfD) party. AKK tried to get the state’s CDU party to change its mind but was rebuffed, and Merkel was forced to remotely enforce party discipline during a state visit to South Africa. Her authority in tatters, AKK quit.

Here’s a rundown of the likely candidates for Merkel’s (and now AKK’s) successor as the face of German conservatism—and quite possibly the next chancellor of Germany.

Like all four of the top names in the frame for CDU leadership, Armin Laschet (59) hails from North Rhine-Westphalia, Germany’s most populous state. Following a spell in journalism, he served as a member of Germany’s federal parliament, the Bundestag, then went on to become a member of the European Parliament. For the last few years, he has been head of the North Rhine-Westphalia state parliament.

Like AKK, Laschet represents broad continuity from the Merkel era—if anything, he is slightly to the left of the chancellor, who is already more liberal than most in her party.

When Merkel’s government was losing patience with Athens during the Greek debt crisis, Laschet’s was a prominent voice warning against forcing Greece out of the European Union. He was also a strong supporter of Merkel when, in 2015, she made the momentous decision to open Germany’s borders to a million Syrian refugees—a morally-driven move that, though it never caused the chaos that some predicted, fueled the AfD’s march from a fringe anti-euro party to an anti-immigrant juggernaut.

Laschet is pro-immigration. In fact, he wrote a book arguing that it was necessary to counteract a growing shortage of skilled workers in Germany. He is also seen as friendly with the Greens, who are currently polling second after the CDU and could well be part of the next government. If Laschet wins, the CDU might stop losing centrist voters to the Greens.

Laschet is however conscious of the fact that people want change after the Merkel era. “I understand that this chancellorship was influenced by crises, but it would be nice if we entered a new era in which Germany sets its own impulses,” he said in late 2018. And this week he surprised some observers by criticizing Merkel for dragging her heels on the issue of EU reform. Laschet wants Germany to assume more financial responsibility in Europe than the Merkel administration has been willing to countenance.

Merkel didn’t become chancellor by accident. Her ascent involved power struggles, and the most prominent casualty in those tussles was Friedrich Merz. Like Laschet, Merz (64) served in both the European Parliament and the Bundestag. But, several years after Merkel dashed his dreams of taking over the CDU, he quit politics for the life of a corporate lawyer.

Merz is the anti-Merkel: blunt where she is hard-to-read, and confrontational where she aims for consensus. She is famed for her modest lifestyle, while he—a multi-millionaire thanks to his role as chairman of BlackRock’s German asset-management unit and work for U.S. law firm Mayer Brown—owns not one, but two private jets. Germans are not generally keen on conspicuous wealth, which was one reason Merz lost out (by a small margin) to AKK in the last race for CDU leadership.

A fiscal conservative, Merz has proposed giving half of Germany’s $53 billion reserves back to its people in the form of tax cuts, and has advocated for massive simplification of Germany’s labyrinthine tax system.

On immigration, Merz is very much to the right of Merkel and Laschet. He was a vocal critic of Merkel’s refugee decision, and outraged liberals and the left by saying in 2000 that anyone coming to Germany should conform to its culture.

In a Trump-esque flourish, he this week decided to make an enemy of the German press by saying politicians do not need journalists anymore, thanks to social media. Merz is also very socially conservative. He has made what were perceived as chauvinistic jokes, and in 1997 he voted against the criminalization of marital rape. In 2001, when asked for his opinion on Berlin having a gay mayor (Klaus Wowereit), Merz replied: “As long as he doesn’t approach me, I don’t care.”

Merz has made some attempt to win over more than his party’s right wing—he recently described Merkel as “a kind of role model.” Nonetheless, a Merz victory would be seen as an attempt by the CDU to win back voters who have defected to the AfD. “Friedrich Merz is someone who speaks plainly,” said the prominent actor and director Til Schweiger this week. “If anyone can come to grips with the rise of the AfD, it’s him.”

At 39, Jens Spahn is by far the youngest potential leader of the CDU. As such, he would represent generational change—but his direction would be unclear.

When he last took a shot at the top spot in 2018, Spahn was seen very much as a candidate of the right. Like Merz, he has deployed the loaded phrase “Leitkultur” (a reference to the “leading” German culture) and was critical of the refugee influx of 2015, saying the following year that it “cannot be allowed to be repeated.”

But recent years have seen a significant softening of Spahn’s image. As Germany’s health minister, he has become a popular figure with a reputation for competence. Conscious of the Greens appealing to the CDU’s “bourgeois flank,” Spahn has warned against the CDU shifting further to the right. And in an opinion piece for the U.K.’s left-leaning Guardian last year, he proposed what he called a “weltoffener patriotismus.”

“Weltoffen is tricky to translate into English,” he wrote. “It roughly means being open-minded towards the world, open to new ideas and cultures. Weltoffener patriotismus does not make divisions based on ethnicity, but defines clear premises based on which everybody can join.”

Given his age, Spahn might be tempted to wait until the next battle for CDU leadership before trying his luck again—like Merz and Laschet, he is yet to formally announce his candidacy in this round.

In fact, at the time of writing only one person has thrown his hat in the ring, and it’s not a name that commentators were expecting before his Tuesday announcement.

Chair of the Bundestag’s foreign affairs committee, Norbert Röttgen (54) used to be Merkel’s environment minister until she abruptly fired him in 2012. It was Röttgen who, in the wake of the Fukishima disaster, announced the government’s intention to shutter all of Germany’s nuclear power plants by 2022.

Like Merz, Röttgen is a strong Atlanticist, serving on the board of the Atlantic Bridge organization that seeks to promote strong U.S.-German ties. He is also keen on beefing up Germany’s often-timid foreign policy, in particular advocating a tougher stance on Russia—Röttgen is no fan of the contentious Nord Stream 2 gas pipeline.

Röttgen has also opposed the CDU party line on the issue of Huawei’s participation in Germany’s 5G networks, siding more (to no avail) with the U.S.’s hawkish position that the Chinese company cannot be trusted.

One more name is worth briefly mentioning: Markus Söder, the head of the CDU’s Bavarian sister party, the Christian Social Union (CSU).

Söder’s main contribution to the current CDU leadership contest has been to order his party to stay out of it. However, he does want the CSU to influence The Union’s selection of its next candidate for chancellor.

His suggestion that the two roles are separable is at odds with the consensus in the CDU—AKK blamed her own woes on the fact that she only had half of Merkel’s authority, being party leader but not chancellor. But in making that suggestion, Söder also may have thrown Merkel a lifeline.

Merkel is only supposed to step down in 2021, ahead of the federal elections, but AKK’s experience has amplified the voices calling for her to go sooner rather than later—a development that would mean elections this year instead of next. Either way, the CDU’s selection of a polarizing figure such as Merz would probably lead to the collapse of The Union’s coalition with the center-left Social Democrats, again triggering imminent elections.

So this is set to be either a tumultuous year for Germany, ushering in a new coalition, or a year of policy paralysis under Merkel’s lame-duck stewardship. Whatever happens, it should be a characteristically lively period in German politics.