A frustrating 2020 consideration: Which candidate has treated women less bad? 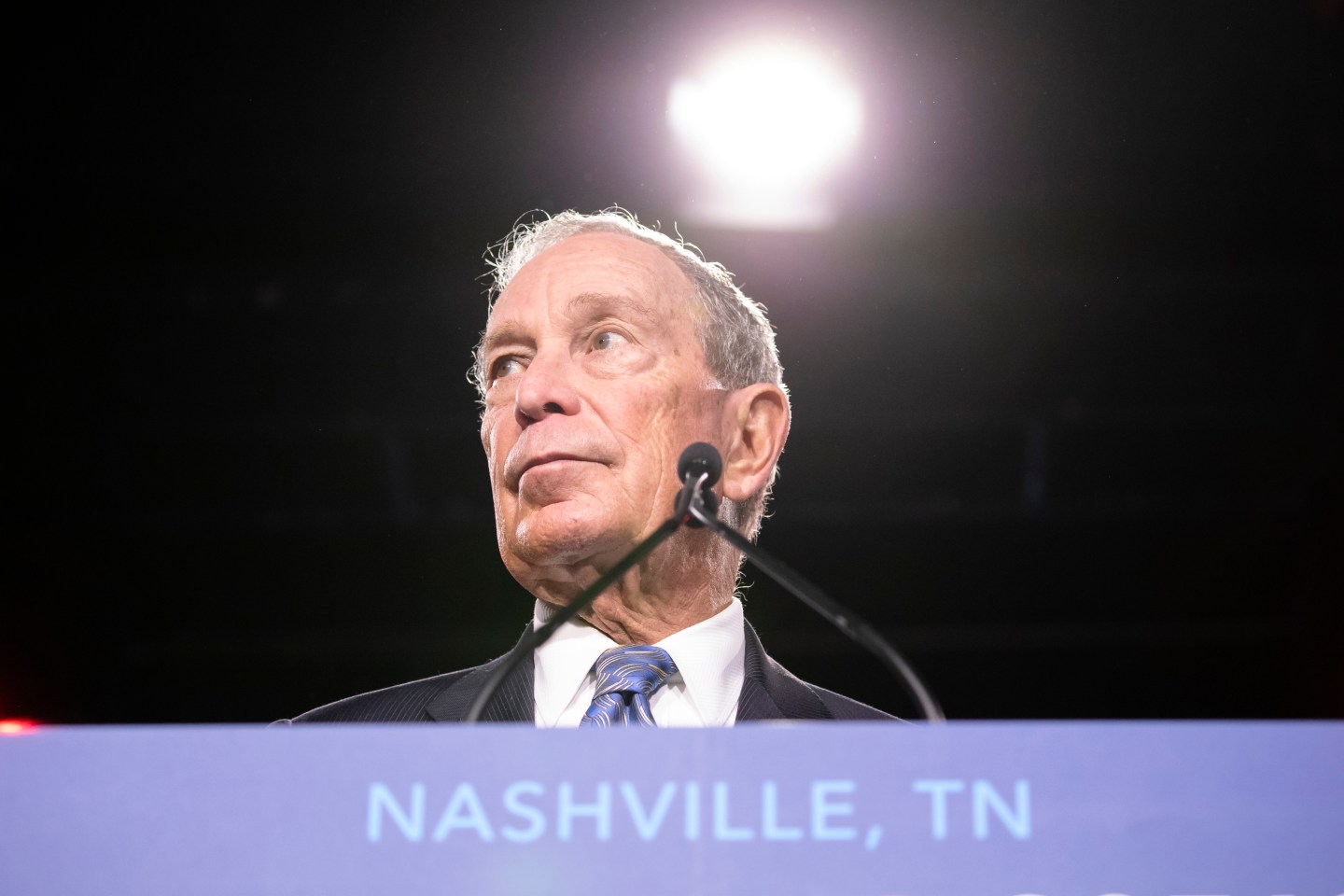 Good morning, Broadsheet readers! Mary Barra’s GM peels out of three more markets, we get a woman’s take on George Washington, and Michael Bloomberg comes under fire. Make the most of your Tuesday.

– Not that bad? Ever since Michael Bloomberg announced his presidential bid, allegations of his mistreatment of women have trickled out. That stream turned into a tidal wave in recent days, as the billionaire appeared to rise in polls and as his campaign continues to torch money in its pursuit of voters. (He qualified for Wednesday’s debate this morning.)

Last week, GQ asked the question, “Why Is Bloomberg’s Long History of Egregious Sexism Getting a Pass?” citing his boasts of womanizing, his demeaning workplace comments, and his more recent skepticism of #MeToo accusers.

Then on Saturday, the Washington Post put a finer point on the matter, with an exposé based on thousands of pages of court documents from discrimination lawsuits filed against Bloomberg and his eponymous financial information, along with company and interviews with witnesses in some of the cases.

In the highest-profile discrimination case, a former company saleswoman claimed that when Bloomberg learned of her pregnancy, he told her to “kill it.” (That allegation had previously been reported; the Washington Post found another employee who says he witnessed the conversation.) Bloomberg denied that allegation under oath and ultimately reached a confidential settlement with the employee.

Bloomberg’s demeanor toward women is also said to be captured in a booklet of his quotes, which he received as a sort of gag birthday gift in 1990 and which the Washington Post published in full. In one passage, Bloomberg allegedly said his company’s terminals could do everything, include perform oral sex. “I guess that puts a lot of you girls out of business,” he allegedly said.

A spokesperson for the Bloomberg campaign told the Post that Bloomberg “simply did not say the things somebody wrote in this gag gift.” The spokesperson also said Bloomberg “openly admits that his words have not always aligned with his values and the way he has led his life and some of what he has said is disrespectful and wrong.”

Nevertheless, Bloomberg has had to answer to the reports on the campaign trail, as his Democratic opponents have pounced on the claims. “I would not be where I am today without the talented women around me,” he tweeted on Saturday. And he’s now facing pressure—including from Sen. Elizabeth Warren—to release ex-employees from their non-disclosure agreements. He’s so far refused.

It’s not just Bloomberg’s Democratic rivals who’ve feasted on the renewed criticism. Kellyanne Conway, advisor to President Donald Trump, said on Sunday that Bloomberg’s alleged remarks are “far worse” than what Trump said in the Access Hollywood tape. Others argue that because Bloomberg has not been accused of sexual misconduct, he’s not quite in Trump territory.

When evaluating how much progress women have made in seeking elected office in recent years, it’s hard to ignore a moment like this, when, in a cycle that once featured a historically diverse field, we’re engaged in a debate about which legitimate candidate for president has treated women less bad.

- Saving San Francisco. San Francisco Mayor London Breed features in Fortune's new deep dive into the future of the city, which has seen problems like homelessness and inequality soar alongside a skyrocketing economy. "The suffering on our streets, it offends our civic soul," she has said. Dig into Adam Lashinsky's longread on San Francisco here: Fortune

- Hard questions. Ever since her third-place finish in the New Hampshire primary, Minnesota Sen. Amy Klobuchar has been grilled—on her record of prosecuting killings by police when she was a county prosecutor, on her immigration policy, and on her stance toward criminal justice reform. The questions, while harsh, seem to indicate Klobuchar's arrival as a serious contender. Politico

- The incredible, shrinking GM. CEO Mary Barra is pulling GM out of three more markets: Australia, New Zealand, and Thailand. It's part of her plan to downsize the company's global presence in favor of investing in electric vehicles to compete with Tesla. She previously yanked Chevrolet out of Europe in 2015, exited Russia that same year, and sold two brands—Germany's Opel unit and the U.K.'s Vauxhaul—to France’s Peugeot SA in 2017. Fortune

- Decision time. The five women and seven men who make the up the jury in the trial of Harvey Weinstein will begin deliberations in Manhattan today. If they find the disgraced movie mogul guilty of predatory sexual assault, Weinstein will face a sentence of life in prison. The Guardian

- RBG vs. ERA. Last week, Supreme Court Justice Ruth Bader Ginsburg took a bit of air out of the Equal Rights Amendment movement by saying the recently-revived effort to amend the U.S. Constitution should "start over." It's put advocates in the awkward position of rebutting the feminist icon, including Linda Coberly, who heads the ERA Coalition’s legal task force and says it's still worth seeing the current process through. The Atlantic

- Museum mess. Caroline Baumann was forced to resign as director of the Cooper Hewitt, Smithsonian Design Museum earlier this month after an investigation into how she procured her wedding dress and wedding venue. The probe reportedly turned up an appearance of a conflict of interest; six of the museum's 27 board members have resigned over the decision to remove her. New York Times

- Credit card controversy. OneUnited, the U.S.'s largest black-owned bank, was ridiculed last week when it announced its debit card would feature Harriet Tubman's image. Teri Williams, the bank’s president and chief operating officer, defended the move as symbolic. Tubman was against the dehumanizing capitalism that was practiced in America, but “she recognized the value of economic empowerment for security,” Williams argues. New York Times

Kate Middleton opens up about 'mommy guilt' on podcast CNN

A nun's journey in the Amazon New Yorker

"[S]tanding up against injustice was right. Refusing to give in to fear was right. Telling the truth was right. I knew I had to speak up. And I’m so glad I did."

-Susan Fowler, a former Uber engineer, in an essay adapted from her new book, Whistleblower: My Journey to Silicon Valley and Fight for Justice at Uber.