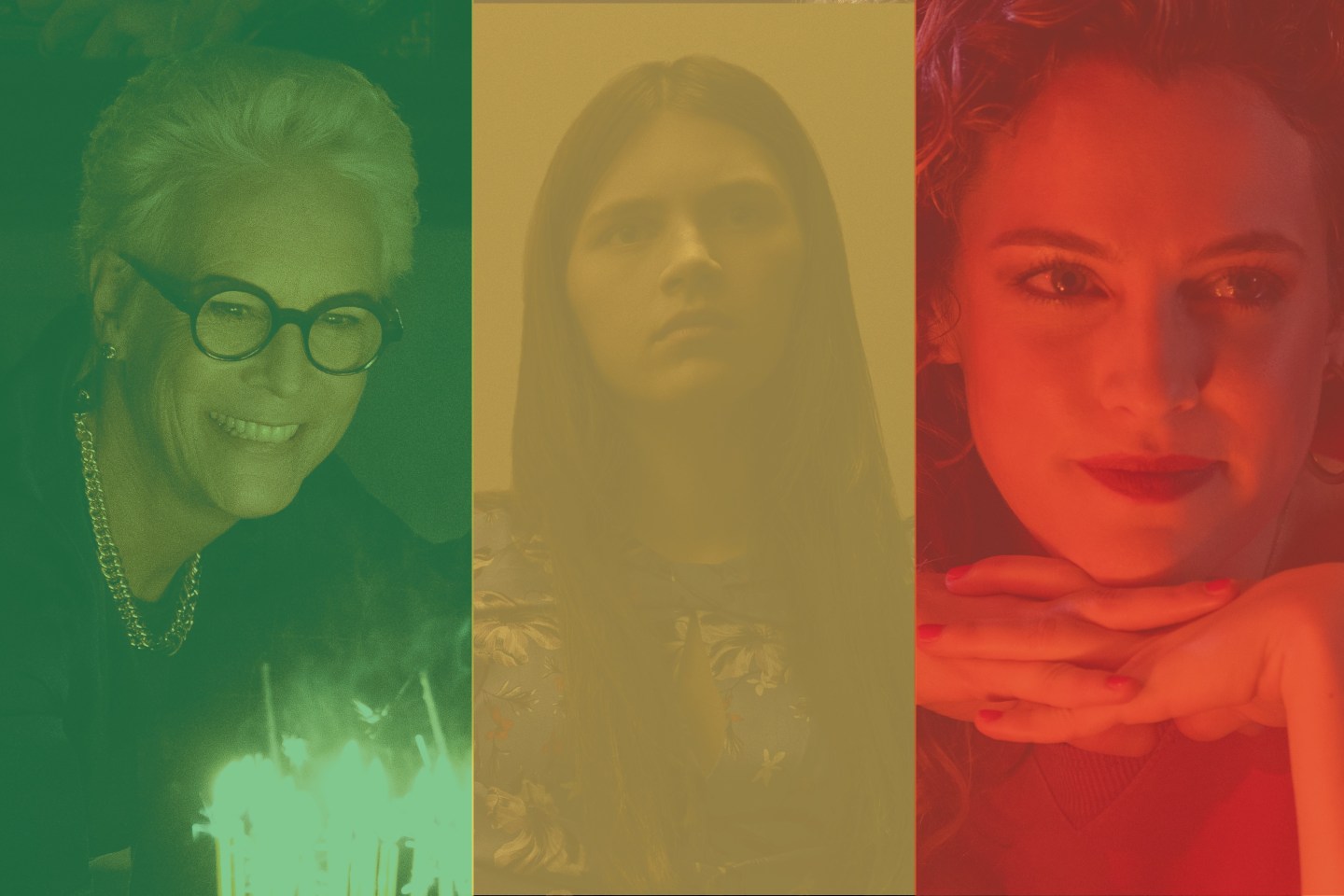 Fortune‘s here to help you navigate the week’s offerings, especially given the Thanksgiving holiday, boiling all the entertainment out there down into three distinct recommendations: should you see it, stream it, or skip it? Find out below.

SEE IT: ‘Knives Out’ (In theaters)

There are few popcorn pleasures more appealing than watching a gleefully game cast of entertainers get up to no good within the hokey, cartoonish confines of a murder mystery.

Knives Out, a modern “whodunit” from Rian Johnson (best known for leaping from ultra-clever sci-fi Looper to Star Wars: The Last Jedi), is certain to be one of the movie theater’s greatest delights this year. It is not high art, nor is it posturing as such. It likely won’t win Oscars, unless they give Oscars for “Best Moustache-Twirling Southern Accent” (to Daniel Craig, as the outrageously hammy private eye, Benoit Blanc) or “Most Genius Line Delivery Involving Baked Goods” (also Craig, comparing the case at hand to a doughnut inside another doughnut).

What Knives Out promises is a grand, old-fashioned time at the movies, and that it delivers in spades. Johnson’s homage to Sleuth and Clue begins, as it must, with a suspicious death: that of bestselling novelist Harlan Thrombey (Christopher Plummer), who leaves behind a vast publishing fortune. Gathering at his magnificently lavish mansion for a will-reading, family members instead find themselves the subject of an inquiry by two detectives (Lakeith Stanfield, unexpectedly playing the straight man for once, and Johnson’s frequent collaborator Noah Segan), as well as the theatrical Blanc. And in the background, Thrombey’s faithful nurse (Ana de Armas, in a star-making performance) may know more than she lets on…

“I read a tweet about a New Yorker article about you,” exclaims Joni (Toni Collette), the novelist’s hippie-dippie daughter. She’s just one ace in the film’s killer hand; watch also for Jamie Lee Curtis, excellent as the sneering Linda, and Don Johnson as her philandering husband, Richard. The first time you watch Knives Out, you’ll delight at the outsized antics of its murderer’s row of actors, from a side-splittingly funny Michael Shannon to a roguish, very-against-type Chris Evans. (Best of all, it must be said, is Craig, whom we should require by law to play a crafty, kooky, thigh-slapping Southern gentleman at least once a year. )

But on the second watch, you’ll be more wowed by the fiendishly clever, tongue-in-cheek acrobatics of Johnson’s script, a full-on love letter to the Agatha Christie mystery that’s dipped in the acid ink of a writer-director who just came barreling out of the blockbuster machine. Unusually plugged into the zeitgeist for a story this otherwise timeless, Knives Out takes vicious stabs at online-troll culture (via Jaeden Martell, as an unbearably evil little kid) and Trumpian government. But it never loses sight of what it is: a colorful, classy Rube Goldberg machine of hidden corridors, secret alliances, and shifty characters. That is to say, it’s one hell of a good time.

The movies of filmmaker M. Night Shyamalan are governed by faith—in the impossible, the divine, the supernatural, the power of storytelling to mediate such states, and most of all in himself to tell those stories. Across films like Signs, The Sixth Sense, and Unbreakable, he challenges everyday, working-class protagonists to believe in the fantastical (be it aliens, ghosts, or the existence of superheroes), and explores how their acceptance of such phenomena changes their outlook, and so their fate.

Shyamalan’s a deeply ambitious filmmaker in this sense, given to labyrinthine plots with wild twist endings, and his vision often escapes his grasp. There’s little defending the self-serious cheesiness of The Happening, where plant life defends itself against humanity’s ravages by releasing a “suicide toxin” into the air. And the less said, the better, about Shyamalan’s godawful The Last Airbender, his attempt at a grand fantasy epic that fell flat due to acting and writing so wooden it constituted a fire hazard.

But in recent years, Shyamalan has worked harder to balance his theistic storytelling within sturdier genre frameworks. Split and Glass, completing the filmmaker’s first-ever trilogy, deconstructed the idea of the supervillain across a pair of movies (following 2000’s Unbreakable, over a decade earlier) that were strongly acted and thoughtfully written enough to just about withstand all the navel-gazing.

It’s important to understand the tao of Shyamalan, his unquenchable thirst for stories far-reaching and conscientious enough to keep him on his toes, before entering into Servant, the mystery box of a TV series he’s executive-producing for Apple TV+. The series was actually created and written in its entirety by Tony Basgallop, known for stately palace-intrigue series Hotel Babylon, but Shyamalan’s stamp of approval is more than just packaging, as he directed the first and penultimate installments.

Servant revolves around an upper-class couple, Dorothy and Sean Turner (Torchwood: Miracle Day‘s Lauren Ambrose and Black Mirror‘s Toby Kebbell), who hire a sitter to look after their newborn son, Jericho. When a seemingly devout, eerily quiet young woman named Leanne (Nell Tiger Free, Game of Thrones) answers their call, she unnerves Sean but becomes something of a fixation for the insecure, traumatized Dorothy.

The show’s central mystery feels perfectly in line with Shyamlan’s unearthly, character-driven ethos. Giving away too much of the story Servant teases out across its first season of 10 half-hour episodes (a second is already ordered) would be to rob audiences of its primary pleasure, which is the simple art of the page-turner reveal.

There is one twist, revealed halfway through the first episode, that’s worth noting. Jericho, the baby, died some time ago, and what the Turners have hired Leanne to look after is actually a doll made in his image, designed to help Dorothy survive the trauma of losing her child. That’s all well and spooky, but there’s another issue: Leanne seems to think the baby’s real, too.

That unsettling revelation sets the tone for what’s to come in Servant, as Leanne’s true intentions toward the Turners are gradually teased out and the atmosphere of dread in the show’s one location—a gloomy Philadelphia household filled with dark shadows—grows increasingly unbearable. What Servant is after, it appears, is a chilly horror story more in the vein of Rosemary’s Baby and The Hand That Rocks the Cradle, though there are significant overtures toward horror films as classic as Dracula and The Silence of the Lambs. That holy quality of Shyamalan’s storytelling, the feeling of forces acting upon his characters from just beyond the frame, is wholly palpable as well. Wherever Servant‘s headed, its first episodes out of the gate constitute some of the most successful, scary genre storytelling on TV in some time.

Chief among the cardinal sins of this straight-to-Netflix thriller (a platform increasingly becoming the new “direct-to-DVD” denotation for turkeys): it’s mind-numbingly dull.

An adaptation of Susanna Jones’s mysterious, existential novel, Earthquake Bird is set in 1989 Tokyo and centers on a love triangle between three individuals adrift in time and place. First, there’s the ultra-symbolically named Lucy Fly (Alicia Vikander), an American expatriate who’s found work as a translator and appears fully assimilated into Japanese culture, though she’s still inclined toward the types of long, empty stares that convey a lingering, soul-deep disquiet.

When Lucy encounters Teiji (Naoki Kobayashi), a local photographer with intense eyes and a coy smile, she’s seduced by his promise to see her more truthfully through his lens, whatever that means. The pair engage in strange, allusive back-and-forths (as well as copious amounts of lovemaking) in his studio apartment behind the noodle restaurant, where the earth’s tremors make the ground shake then, as they fade, become still in a way somehow more beautiful than before. It’s all very abstract and moody in a way that’s intended to evoke the world-bending fiction of Haruki Murakami, albeit without the compelling dream logic of his best scenarios.

Lucy and Teiji’s love affair is complicated by the arrival of Lily (Riley Keough), an American utterly unprepared to exist in this unfamiliar culture. She points out how Japanese people stare at her, taking note of her otherness, and can’t quite seem to figure out whether she’s troubled or flattered by the attention. To Lucy, all of Lily’s excitable, flirtatious energy is more than just distracting; it triggers an internal avalanche, leading the person Lucy left behind to reappear under the skin of the person she has become. Then Lily disappears, and Lucy is brought in for questioning, only for the investigation to further blur the lines between these characters’ jigsaw-puzzle realities.

But this is a missing-person mystery that struggles to earn its entreaties toward psychosexual intrigue, mostly because of writer-director Wash Westmoreland’s curiously slack, inattentive direction. Earthquake Bird should at the very least be an interesting failure, but it often barely feels like a movie at all, Westmoreland’s camera patiently waiting for sparks between his leads that the dreary, overly complicated script never allows them to generate.

What Earthquake Bird gets right is the sense of dislocation that can arise from living as a stranger in a strange land. Japan has long served as this backdrop for cerebral, character-driven mysteries; its sense of zen, somewhere between gentle neon signage and overcrowded subways, has allowed many a foreigner to find themselves, from the two stunted souls of Sofia Coppola’s Lost in Translation to the pulpier protagonist of Ridley Scott’s Black Rain (which gets a neat shout-out here). To Westmoreland’s credit, his depiction of Japan has a real curiosity and passion behind it, and the film’s best sequences set the psychosexual tensions between its three leads against gorgeous, striking backdrops that feel so alive as to augment the ebbs and flows of the characters’ emotions.

But especially as it enters its overly explanatory third act, Earthquake Bird descends in both plausibility and basic narrative cohesion until its plot resembles a controlled flight into terrain. Late-stage revelations involving one key character land so poorly that they call into question the purpose of the film preceding them. What Earthquake Bird is really about, other than its own twisty telling, remains unclear at film’s end, any grand points it might have made squandered by a conclusion that’s neither earned nor particularly satisfying. There’s a much better film hiding somewhere inside what Westmoreland has constructed, but his inability to draw it out makes for one of the most tedious and disappointing watches of the year.