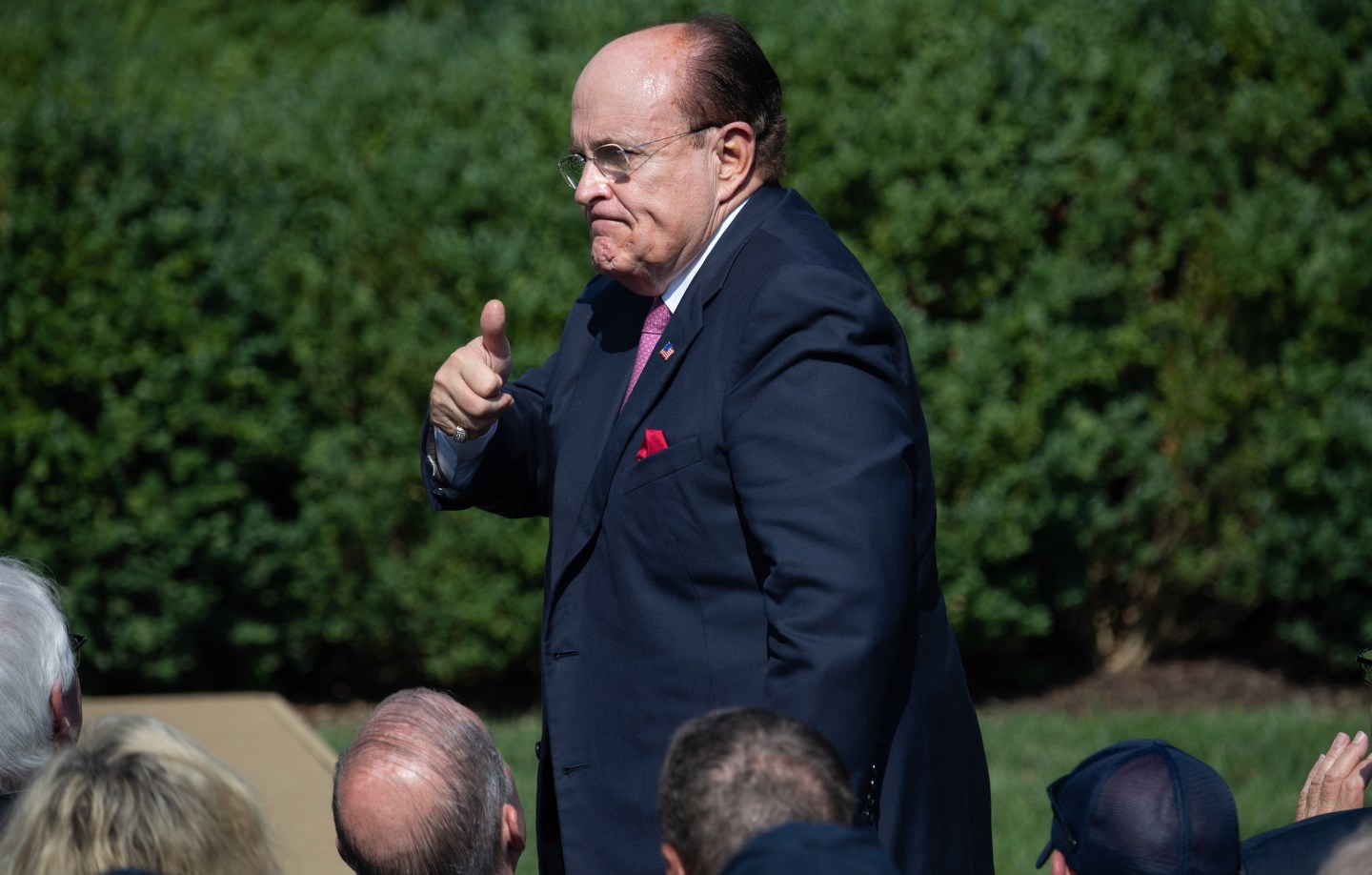 Rudy Giuliani, President Donald Trump’s personal lawyer, is being investigated by federal prosecutors for possible campaign finance violations and a failure to register as a foreign agent as part of an active investigation into his financial dealings, according to three U.S. officials.

The probe of Giuliani, which one official said could also include possible charges on violating laws against bribing foreign officials or conspiracy, presents a serious threat to Trump’s presidency from a man that former national security adviser John Bolton has called a “hand grenade.”

A second official said Giuliani’s activities raise counterintelligence concerns as well, although there probably wouldn’t be a criminal charge related to that. The officials, who asked for anonymity to discuss a sensitive matter, provided the first indication of the potential charges under investigation.

Giuliani is a central figure in the U.S. House impeachment inquiry, which focuses on an effort led by the former New York City mayor to pressure Ukraine’s government to investigate the president’s political rivals. If Giuliani is charged or indicted, he could expose Trump to a new level of legal and political jeopardy, especially if he’s accused of committing a crime on the president’s behalf.

“I would not be surprised if he gets indicted,” said Mimi Rocah, a former federal prosecutor with the U.S. Attorney’s Office for the Southern District of New York. “It’s clear Giuliani is up to his ears in shady stuff and there’s tons of smoke.”

Giuliani’s work in Ukraine for Trump

Witnesses in the impeachment inquiry have described how Trump withheld military aid to Ukraine and a White House meeting for the country’s newly elected president, Volodymyr Zelensky, to force him to investigate a company connected to former Vice President Joe Biden and his son Hunter. Biden is a Democratic frontrunner to challenge Trump in 2020.

Democrats have called Trump activities with Giuliani’s assistance as a potential abuse of presidential power, while some Republicans have argued that Trump’s conduct doesn’t merit his removal from office.

Giuliani is under investigation by the U.S. attorney’s office in Manhattan, which he once led. The office began to scrutinize his activities in Ukraine as prosecutors investigated two of his associates, Lev Parnas and Igor Fruman. The two were subsequently charged in the U.S. with illegally funneling hundreds of thousands of dollars to U.S. officials and a political action committee that backed Trump.

Parnas and Fruman were working for Giuliani on matters related to Trump. It’s not clear, however, whether the investigation of Giuliani is focusing on the work he did for the president.

Giuliani, his lawyers and the White House didn’t respond to requests for comment.

On Friday, the Wall Street Journal reported that federal prosecutors in New York are investigating whether Giuliani would personally profit from a natural gas business and pipeline from Poland to Ukraine that was advanced by Parnas and Fruman. The two pitched the project to Ukraine officials and energy executives and said it had the Trump administration’s support, the newspaper reported.

Giuliani told the Journal he had no knowledge of the energy company, and no personal interest in any business in Ukraine.

Trump has shown no signs he is willing to part ways with Giuliani. Trump told reporters on Oct. 25 Giuliani is a “good man” who is one of the “the greatest crime fighters and corruption fighters.”

But some Trump allies in Congress have sought to put distance between the two men, painting Giuliani as a rogue player not operating under Trump’s orders. That description is at odds with Giuliani’s claim he was acting as the president’s personal defense attorney.

Rep. Mark Meadows, a North Carolina Republican, said that “the Democrats’ motive is to bring Giuliani in front and center and they believe that by impeaching Giuliani they can impeach the president.”

Cutting ties with Giuliani amid the impeachment inquiry would be risky for Trump because of the possibility he could turn against the president.

Giuliani was asked in an interview with the Guardian whether he was concerned Trump might “throw him under a bus.” Giuliani laughed and said: “I’m not, but I do have very, very good insurance, so if he does, all my hospital bills will be paid.”

Giuliani sits in a unique position, serving not only as the president’s lawyer but also an ally who seeks to further Trump’s political objectives.

Senior State Department officials said at a House impeachment hearing on Wednesday that Giuliani was carrying out a shadow campaign in Ukraine earlier this year at Trump’s behest. Giuliani’s work included seeking incriminating information on Biden, and he also pushed for the removal of then-U.S. Ambassador to Ukraine Marie Yovanovitch. Giuliani worked with Parnas and Fruman on the efforts in Ukraine.

“I believe he was looking to dig up political dirt against a potential rival in the next election cycle,” testified George Kent, deputy assistant secretary of State in the European and Eurasian bureau.

William Taylor, the acting U.S. ambassador to Ukraine, described an “irregular policy channel” toward Ukraine led by Giuliani. Taylor described his “astonishment” when he was told in July by a White House budget official that U.S. aid to Ukraine was being withheld under the orders of Trump through the acting White House Chief of Staff Mick Mulvaney.

Giuliani could face charges related to extortion or other crimes stemming from trying to get Ukraine to open an investigation into the Bidens or into whether Ukraine interfered in the 2016 U.S. election, said Kenneth McCallion, a former federal prosecutor.

Such charges could implicate Trump in a criminal activity, McCallion added. Justice Department policy prohibits a president from being criminally charged while in office, although it wouldn’t shield him after he leaves office.

The Journal reported McCallion represents a number of Ukrainians who learned of the pipeline deal involving Parnas and Fruman.

Giuliani: “We are engaged in combat”

Rocah said the actions Trump, Giuliani, and other officials took related to Ukraine may be more complicated, and what appears to be wrongdoing on the surface may be hard to charge as crimes.

Giuliani, after several weeks of backing away from the public spotlight, has become somewhat more active in recent days, with the Guardian interview and a Wall Street Journal op-ed defending Trump’s conduct and blasting the impeachment inquiry.

Giuliani has been making a case against impeachment, and argued the president’s supporters need to mount an aggressive public defense in the media. Giuliani said Friday on an impeachment-focused podcast hosted by former White House senior adviser Steve Bannon that public pressure could convince swing-district Democrats to vote against articles of impeachment.

“We are engaged in combat,” Giuliani said. “Even if they don’t impeach him, they’re hoping that somehow it will take his numbers down and maybe they can beat him.”

—Democratic presidential candidate Tom Steyer isn’t that kind of billionaire
—Bernie Sanders dominates in donations from suburban women
—Trump wants to ban flavored vape products. Why not menthol cigarettes, too?
—The 2020 tax brackets are out. Here’s what you need to know
—More companies are openly supporting abortion rights
Get up to speed on your morning commute with Fortune’s CEO Daily newsletter.