Marie Yovanovitch: Trump Wanted Her Out As Ukraine Ambassador 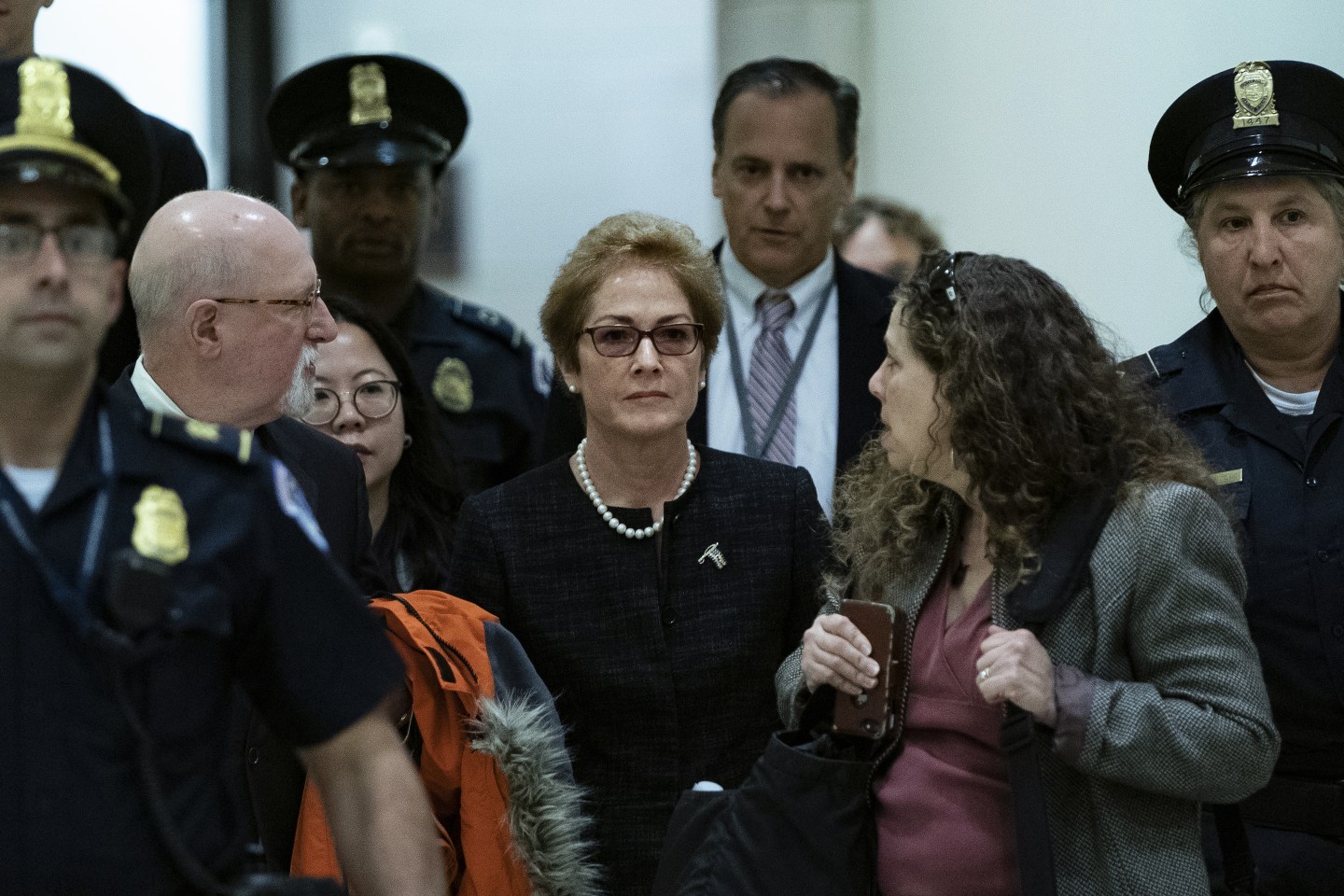 Yovanovitch said in an opening statement obtained by The Associated Press that she was “abruptly” recalled in May and told the president had lost confidence in her. She said she was told by an official there was a “concerted campaign against me” and that Trump had pressured officials to remove her for almost a year.

“Although I understand that I served at the pleasure of the president, I was nevertheless incredulous that the U.S. government chose to remove an ambassador based, as best as I can tell, on unfounded and false claims by people with clearly questionable motives,” Yovanovitch wrote in the statement.

Yovanovitch appeared for a deposition in the Democrats’ presidential impeachment inquiry, accepting lawmakers’ invitation to testify despite Trump’s declaration barring anyone in his administration from cooperating with the probe. The diplomat’s congressional appearance indicates the Trump administration’s no-cooperation strategy isn’t steadfast.

Democrats are investigating Trump’s pleas to Ukrainian officials to launch investigations of political rival Joe Biden and his family and to probe Ukraine’s involvement in the 2016 U.S. presidential election, about which there’s been no evidence.

Yovanovitch was recalled from Kyiv as Rudy Giuliani—who is Trump’s personal attorney and has no official role in the U.S. government—pushed Ukrainian officials to investigate baseless corruption allegations against the Bidens. The career diplomat was removed from her post after insisting that Giuliani’s requests to Ukrainian officials for investigations be relayed through official channels, according to a former diplomat who has spoken with her.

The former diplomat who spoke with Yovanovitch said the ambassador refused to do “all this offline, personal, informal stuff” and made clear the U.S. government had formal ways to request foreign governments’ help with investigations. The former diplomat insisted on anonymity to disclose the private conversation.

The State Department traditionally relies on mutual legal assistance treaties, under which U.S. and foreign officials agree to exchange evidence and information in criminal investigations.

While Yovanovitch said she has met Joe Biden, the former vice president and senator, “several times” over many years, “neither he nor the previous administration ever, directly, or indirectly, raised the issue of either Burisma or Hunter Biden with me.”  Burisma Holdings is the Ukraine gas company on whose board Biden’s son, Hunter, served.

Regarding Giuliani, Yovanovitch said she’s had “minimal contacts with him—a total of three that I recall,” which had nothing to do with “the events at issue.” (On Thursday, two men accused of helping Giuliani seek damaging information on Democrats in Ukraine were arrested on U.S. charges of funneling illegal foreign contributions to American political candidates in 2018.)

“I do not know Mr. Giuliani’s motives for attacking me. But individuals who have been named in the press as contacts of Mr. Giuliani may well have believed that their personal financial ambitions were stymied by our anti-corruption policy in Ukraine,” Yovanovitch said in her prepared remarks.

As for Yovanovitch’s being recalled, she said a State official told her “the department had been under pressure from the president to remove me since the summer of 2018.” She said the official added: “I had done nothing wrong and that this was not like other situations where he had recalled ambassadors for cause.”

Furthermore, Yovanovitch said: “To make matters worse, all of this occurred during an especially challenging time in bilateral relations with a newly elected Ukrainian president. This was precisely the time when continuity in the embassy in Ukraine was most needed.”

“The harm will come when private interests circumvent professional diplomats for their own gain, not the public good,” she said. “The harm will come when bad actors in countries beyond Ukraine see how easy it is to use fiction and innuendo to manipulate our system. In such circumstances, the only interest that will be served are those of our strategic adversaries, like Russia, that spread chaos and attack the institutions and norms that the U.S. helped create and which we have benefited from for the last 75 years.”

Yovanovitch is now a State Department fellow at Georgetown University. Trump said earlier this week that he would block all officials from testifying, saying the probe was unfair and “illegitimate.” It was unclear if Yovanovitch’s appearance signaled a shift in that strategy or if she was breaking with White House orders.

In a July 25 phone call, Trump told Ukrainian President Volodymyr Zelensky that Yovanovitch was “bad news,” according to a transcript of a whistleblower complaint. Neither Giuliani nor Trump has publicly specified their objections to Yovanovitch.

The businessmen arrested Thursday with ties to Giuliani lobbied a U.S. congressman in 2018 for help ousting Yovanovitch, according to an indictment made public following their arrest on campaign finance violations. It alleges the men leveraged a flurry of GOP political donations to force Yovanovitch’s removal, an effort prosecutors say was aided by laundered foreign money.

Yovanovitch was speaking to the House Intelligence, Foreign Affairs, and Oversight and Reform committees behind closed doors. The committees are scheduled to talk to several other U.S. diplomats next week, as well.

Next diplomats to testify in impeachment inquiry

Sondland was originally scheduled for a deposition this past Tuesday but did not show up. Trump tweeted immediately afterward that he couldn’t let Sondland testify because the Democratic-led probe was “compromised.”

The committees subpoenaed Sondland hours later for a deposition next week, and his attorneys said Friday he would testify on Oct. 17, despite the administration’s position.

“Notwithstanding the State Department’s current direction to not testify, Ambassador Sondland will honor the Committees’ subpoena, and he looks forward to testifying on Thursday,” said a statement from attorneys Robert Luskin and Kwame Manley. “Ambassador Sondland has at all times acted with integrity and in the interests of the United States. He has no agenda apart from answering the Committees’ questions fully and truthfully.”

The statement said, however, that Sondland would not be able to produce documents “concerning his official responsibilities,” as they were controlled by the State Department.

Democrats want to ask him about text messages among U.S. diplomats released last week that show him and two others acting as intermediaries as Trump urged Ukraine to investigate Ukraine’s involvement in the 2016 U.S. election and Hunter Biden’s involvement with Burisma gas.

Earlier this week, the White House sent Congress a letter outlining its opposition to the impeachment probe and refusing to cooperate with requests for information, including interviews with administration officials. The House committees have moved to subpoena officials instead.

On Thursday, 10 Democratic senators sent a letter to Secretary of State Mike Pompeo demanding an explanation for Yovanovitch’s removal before the end of her three-year assignment.

“In particular, her early recall raises questions about whether you put the personal interests of the President above the Department’s career personnel or U.S. foreign policy,” they wrote.

Yovanovitch has led U.S. embassies in Kyrgyzstan and Armenia The director of the Georgetown program where Yovanovitch is a State Department fellow, Barbara Bodine, said the former envoy is declining all requests for interviews.

Former colleagues of Yovanovitch said Trump allies’ characterizations of her as politically motivated are off-base.

She is “a top-notch diplomat, careful, meticulous, whip smart,” and unlikely to have badmouthed Trump, either to Ukrainian officials or her colleagues, said John Herbst, a predecessor as ambassador in Ukraine who worked alongside Yovanovitch there in the early 2000s.

Yovanovitch has always known that the role of diplomat “wasn’t about her” but about “serving American national interests and supporting the people around her,” said Nancy McEldowney, a former U.S. ambassador to Bulgaria who now directs a Foreign Service program at Georgetown.

—A running list of questions on the impeachment inquiry, answered
—3 questions for whistleblower advocate Joe Kostyack
—5 lessons history has taught us about impeachment
—For big gig economy companies, California is no longer a Golden State
—How the circumstances around Donald Trump’s impeachment inquiry differ from Bill Clinton’s
—How whistleblowers have taken down titans of American business
Follow Fortune on Flipboard to stay up-to-date on the latest news and analysis.