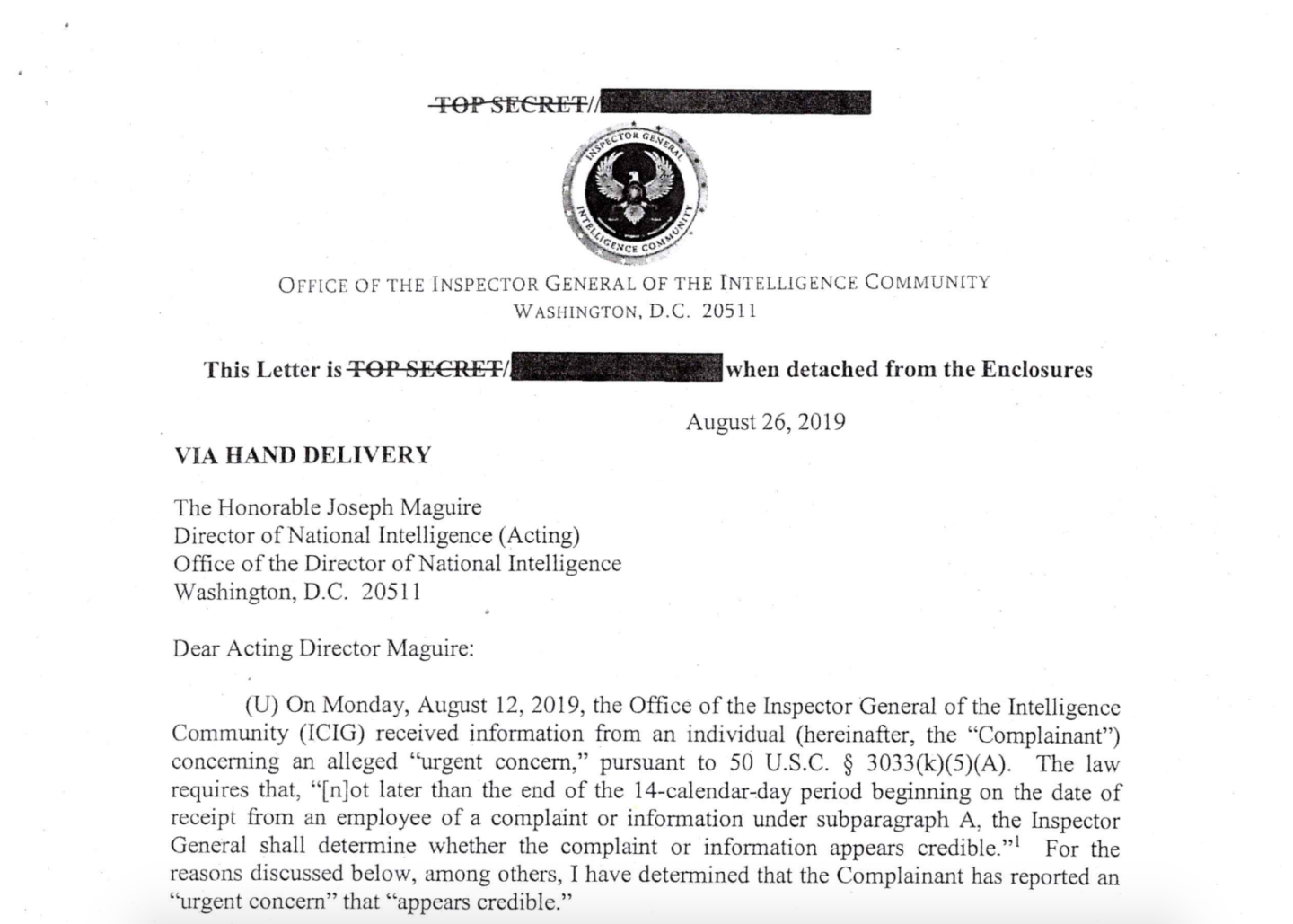 Declassified Whistleblower Complaint
Office of the Director of National Intelligence

A secret whistleblower complaint at the center of an impeachment inquiry alleges that President Donald Trump abused the power of his office to “solicit interference from a foreign country” in next year’s U.S. election. The White House then tried to “lock down” the information to cover it up, the complaint says.

The 9-page document was released Thursday ahead of testimony to House investigators from Joseph Maguire, the acting director of national intelligence.

The whistleblower complaint is at least in part related to the July phone call between Trump and Ukrainian President Volodymyr Zelenskiy in which Trump prodded Zelenskiy to investigate Democratic political rival Joe Biden. The White House released a rough transcript of that call on Wednesday.

“In the days following the phone call, I learned from multiple U.S. officials that senior White House officials had intervened to ‘lock down’ all the records of the phone call, especially the official word-for-word transcript of the call that was produced as is customary by the White House situation room,” the complaint says.

The anonymous whistleblower says that despite his or her not being present for the call, multiple White House officials shared consistent details about it.

The document, with its precise detail and clear narrative, will likely accelerate the impeachment process and put more pressure on Trump to rebut its core contentions and on his fellow Republicans to defend him. The complaint also provides a road map for corroborating witnesses, which will complicate the president’s effort to characterize the findings as those of a lone partisan out to undermine him.

Still, Trump immediately tweeted, “The Democrats are trying to destroy the Republican Party and all that it stands for. Stick together, play their game and fight hard Republicans. Our country is at stake.” The tweet was in all capital letters.

House Democrats who are now mulling Trump’s impeachment are hoping Maguire will explain why he withheld the intelligence community whistleblower’s complaint from Congress for weeks. Maguire will then go behind closed doors to speak to the Senate intelligence panel.

House Speaker Nancy Pelosi on Tuesday endorsed an impeachment investigation in light of the Ukraine revelations.

In a statement Thursday, the White House said “nothing has changed with the release of this complaint, which is nothing more than a collection of third-hand accounts of events and cobbled-together press clippings_all of which shows nothing improper.”

This story is developing…

—What is CrowdStrike? Trump mentioned the company in his Ukraine call
—What the latest polling tells us about public support for impeachment
—These are the key players in the Trump impeachment inquiry
—How impeachment momentum massively shifted among democrats
—The 25 most powerful women in politics