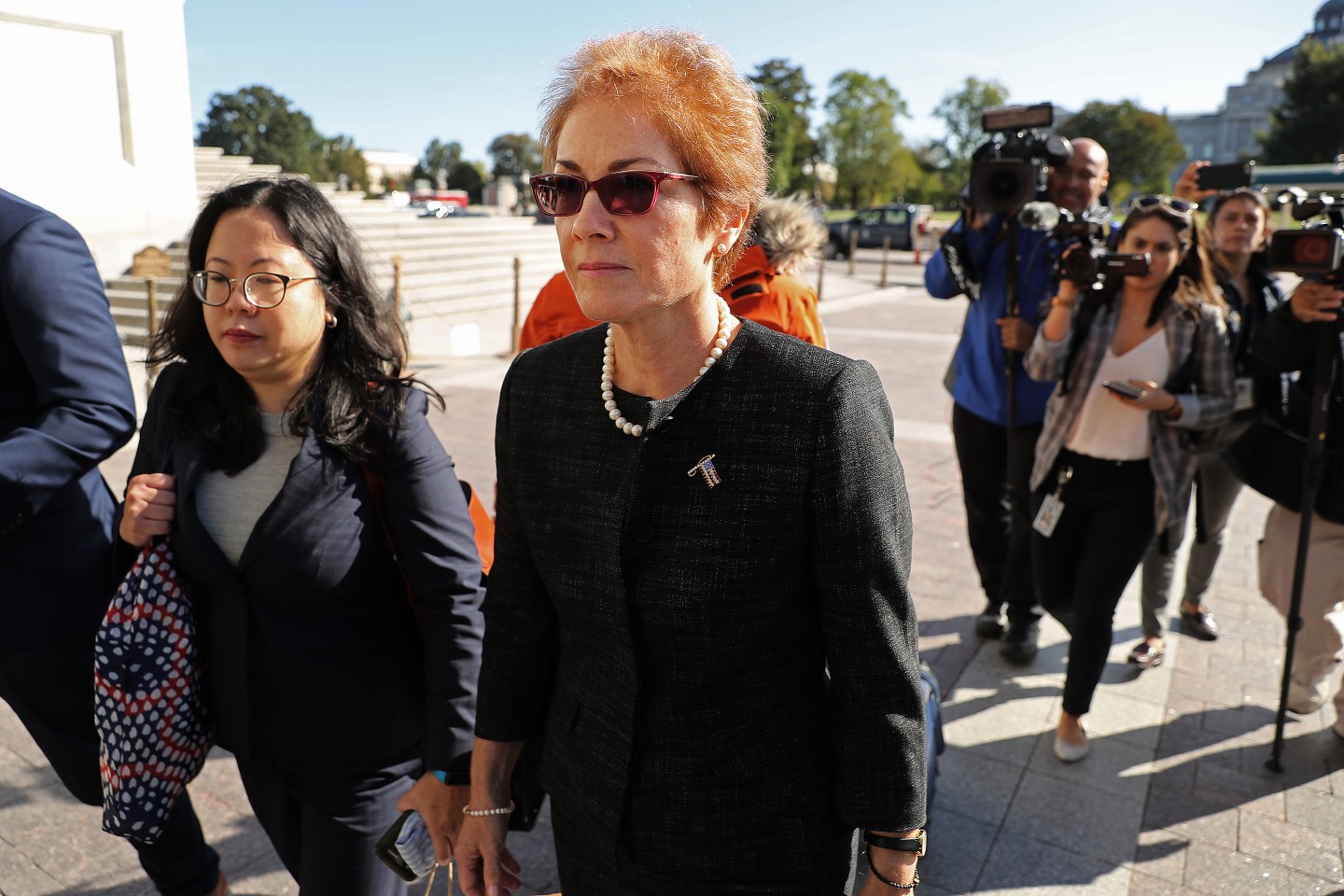 WASHINGTON, DC - OCTOBER 11: Former U.S. Ambassador to Ukraine Marie Yovanovitch (C) is surrounded by lawyers, aides and journalists as she arrives at the U.S. Capitol October 11, 2019 in Washington, DC. Yovanovitch was invited to testify behind closed doors to the House Intelligence, Foreign Affairs and Oversight committees as part of the ongoing impeachment investigation against President Donald Trump. (Photo by Chip Somodevilla/Getty Images)
Chip Somodevilla—Getty Images

Former Ambassador to Ukraine Marie Yovanovitch arrived on Capitol Hill for closed-door testimony to the House Intelligence, Foreign Affairs and Oversight and Reform committees on Friday.

Yovanovitch had been removed early from her ambassadorial posting in May after pushing back against requests from the president’s lawyer, Rudy Giuliani, to dig up dirt on unfounded corruption allegations against the Bidens. However, she remains a State Department employee nearing the end of her 33-year career, and is currently a fellow at Georgetown University.

Three House Committee chairmen wrote in a statement that the State Department, at the direction of the White House, directed her not to testify, but she did so after the House Intelligence Committee subpoenaed her to compel her testimony.

According to copies of her opening statement to lawmakers, she said that she was “incredulous” that she was removed “based, as far as I can tell, on unfounded and false claims by people with clearly questionable motives.”

Lawyers for Ambassador to the European Union Gordon Sondland, whom the State Department blocked just two days before from appearing at the last moment, said he would also testify on October 17 after being subpoenaed by House Democrats.

“Notwithstanding the State Department’s current direction to not testify, Ambassador Sondland will honor the Committees’ subpoena, and he looks forward to testifying on Thursday,” wrote his lawyers, Robert Luskin and Kwame Manley.

Collectively, the appearance and scheduled appearance—both under subpoena—by current government employees was a rebuke to the Trump administration’s stance of completely refusing to comply with the impeachment inquiry and ignoring subpoenas.

Yovanovitch’s statement, at least, had the potential to add momentum to the impeachment inquiry, as she revealed how she had been suddenly told to come back to Washington “on the next plane” in late April after being asked by the State Department to stay until 2020.

The administration had tried to block officials from testifying by publicly releasing scathing letters. In an October 1 letter to House Foreign Affairs Committee Chairman Eliot Engel (D-N.Y.), Secretary of State Mike Pompeo wrote that he would “use all means at my disposal to prevent and expose any attempts to intimidate the dedicated professionals whom I am proud to lead and serve alongside at the Department of State.”

On October 8, House Democrats said that Sondland’s personal attorneys had received a voicemail at 12:30 a.m. from the State Department on the morning of his testimony informing him that the Trump administration was directing him not to appear before the committees.

He did not appear, despite flying to Washington from Brussels for the appearance and lawmakers flying in from different parts of the country during a congressional recess to hear the testimony.

Later that day, a senior administration official told reporters that there would be a “full halt” to the administration complying with subpoenas for the committees, following the release of a White House letter refusing to cooperate with the inquiry.

A White House spokesman and the State Department did not immediately respond to Fortune‘s request for comment on either the appearance or the planned appearance.

However, there remained questions about how much Sondland would reveal to lawmakers and staffers in closed-door testimony. Sondland’s attorneys, notably, said that his documents related to his “official” responsibilities were property of the State Department.

“By federal law and regulation, the State Department has sole authority to produce such documents,” his lawyers wrote.

Those documents would likely be of interest to House investigators, as Sondland was one of three State Department officials on a text message chain provided by former Special Representative to Ukraine Kurt Volker to the House committees showing how the president tried to pressure Ukraine into starting investigations about the Bidens while dangling military aid.

On the chain, Sondland, a major Trump fundraiser said, “The President has been crystal clear no quid pro quo’s of any kind,” after another official, Ukraine Charge d’Affaires Bill Taylor, said it was “crazy” to withhold military assistance for help with a political campaign.

By contrast to Yovanovitch and Sondland, Volker resigned his unpaid position from the State Department on September 27 in advance of testifying before the House committees and releasing the text messages.

However, the appearance and planned appearance revealed that the White House could no longer count on a total stonewall of the proceedings to prevent officials from talking to Congress.

—A running list of questions on the impeachment inquiry, answered
—Trump impeachment inquiry: Who has been subpoenaed—and why
—5 lessons history has taught us about impeachment
—Most Americans favor an impeachment inquiry—but are wary of removing Trump, polls find
—How the circumstances around Donald Trump’s impeachment inquiry differ from Bill Clinton’s
—How whistleblowers have taken down titans of American business
Follow Fortune on Flipboard to stay up-to-date on the latest news and analysis.