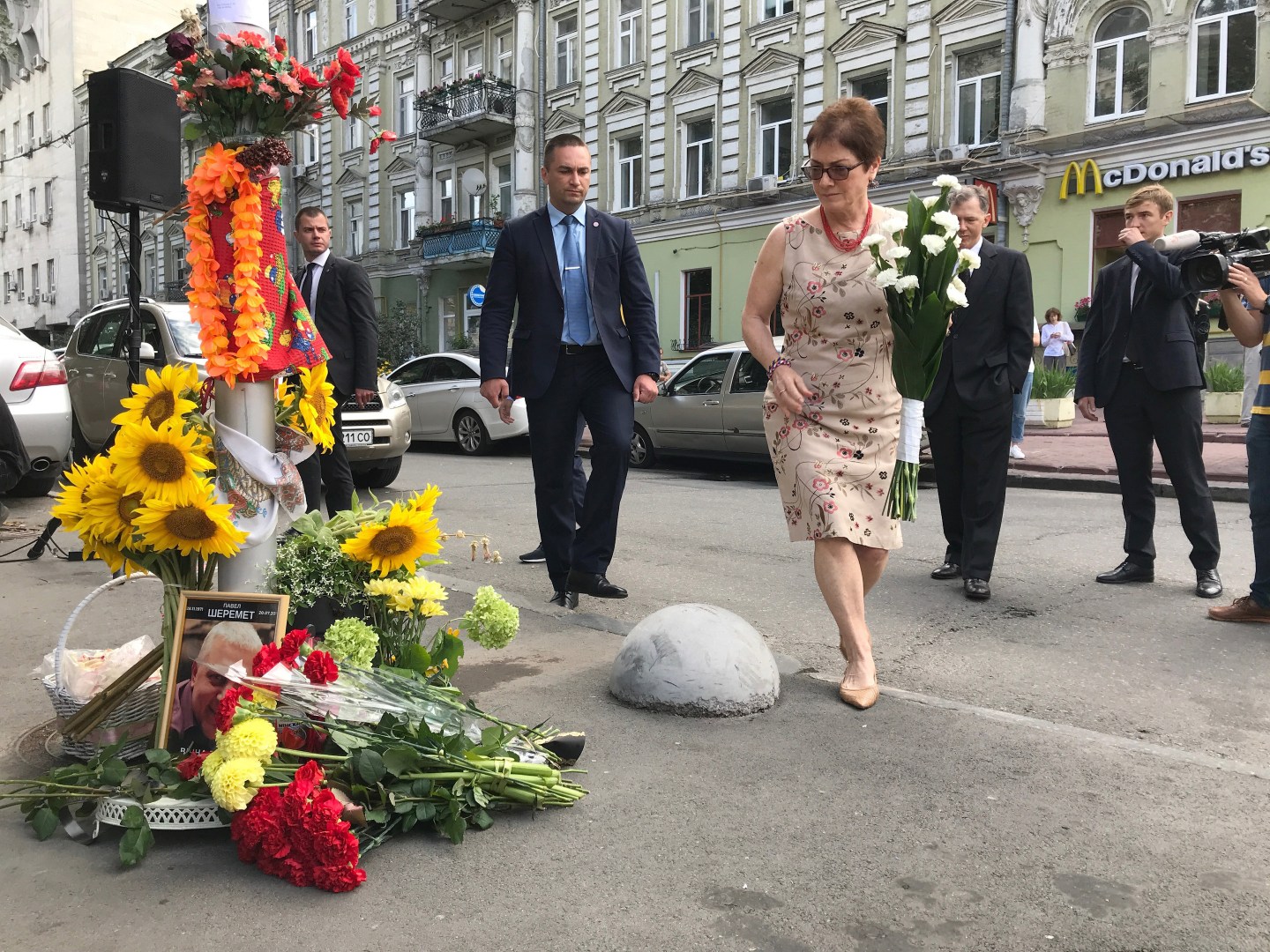 Then U.S. Ambassador to Ukraine Marie Yovanovitch on July 20, 2018, lays flowers in Kyiv where Ukrainian journalist Pavel Sheremet was murdered two years before in a car blast. Yovanovitch is scheduled to testify this week before the House intelligence committee investigating President Donald Trump's ties to Ukraine, as part of its presidential impeachment inquiry.
Siryk Anatolii—Barcroft Media/Getty Images

To President Donald Trump, the diplomat representing the U.S. in Ukraine was “bad news”—a supposedly rogue ambassador with a political bias against him.

But to those who know Marie Yovanovitch—the former envoy to Kyiv who is scheduled to testify before the House this week as Democrats intensify their impeachment inquiry—that characterization could not be more off-base.

Yovanovitch, a State Department employee for 33 years who also led U.S. embassies in Kyrgyzstan and Armenia, is well known in diplomatic circles for her measured demeanor and diligence in representing both Republican and Democratic administrations, former colleagues said.

She is “a top-notch diplomat, careful, meticulous, whip smart,” and unlikely to have badmouthed Trump, either to Ukrainian officials or her colleagues, said John Herbst, a predecessor as ambassador in Ukraine who worked alongside Yovanovitch there in the early 2000s.

That reputation is all but impossible to square with what some view as a smear campaign, capped by the Trump administration’s removal of Yovanovitch from her post in May. The move came as Rudy Giuliani, the president’s lawyer, pushed Ukrainian officials to investigate Trump rival Joe Biden and his son. The former New York mayor labeled Yovanovitch a political hack bent on undermining those efforts, charges that apparently resonated with Trump.

“The former ambassador from the United States, the woman, was bad news,” Trump told Ukraine President Volodymyr Zelenskiy during a July 25 call, according to a partial transcript released by the White House. “She’s going to go through some things.”

To the diplomat’s former colleagues, that makes no sense.

Yovanovitch “is reserved. She is collected. She is not a flamboyant person,” said Nancy McEldowney, a former U.S. ambassador to Bulgaria who said she has known Yovanovitch for about 30 years. Yovanovitch has always known that the role of diplomat “wasn’t about her” but about “serving American national interests and supporting the people around her.”

Giuliani “is impugning every single person who works at that embassy, to say that any of our embassies around the world are partisan and favor one candidate over another. It defies the facts but is also really insulting,” said McEldowney, who now directs a Foreign Service program at Georgetown University.

Currently a State Department fellow at Georgetown’s Institute for the Study of Diplomacy, Yovanovitch did not respond to emails seeking comment. The institute’s director, Barbara Bodine, said the former envoy was declining all requests to speak with reporters.

Yovanovitch, 60, was raised in a household that helped prepare her for a career in international relations.

Born in Canada to immigrant parents—her father from the former Soviet Union and her mother from Germany—she grew up speaking Russian at home. The family moved to Connecticut when she was a young child, and she later became a U.S. citizen.

“Like so many, including those in the Ukrainian-American community, my parents’ lives were changed forever by Communist and Nazi regimes,” Yovanovitch said during a Senate confirmation hearing in 2016, attended by her 88-year-old mother. “They survived poverty, war and displacement, and finally arrived in the United States, with me in tow, in search of freedom, opportunity, dignity, and accountability.”

Yovanovitch attended Princeton University, where she majored in history and Russian studies. She joined the Foreign Service six years later, working as deputy director of the Russian desk before being posted to Canada, Russia, Great Britain, and Somalia.

From 2001 to 2004, she worked as the U.S. deputy chief of mission in Ukraine, as second-in-charge to Herbst, before being named ambassador to Kyrgyzstan, then to Armenia. She returned to Ukraine after President Barack Obama nominated her to be U.S. ambassador in 2016.

She arrived in Kyiv two years after Russia’s forced annexation of Ukraine’s Crimean Peninsula and its continuing military intervention. As an envoy, Yovanovitch sought to reassure Ukrainian officials of U.S. support, while pushing them to root out widespread corruption .

“The old oligarch system is still clinging to life, and corruption is its life support,” she said in a speech in January to new graduates of the Ukrainian Leadership Academy. “Ukraine must continue to pursue economic reforms in line with European standards and fully empower all of its anti-corruption institutions.”

Some Ukrainian officials, including the country’s top prosecutor, bridled against the pressure from the U.S. ambassador.

In March, the prosecutor, Yuriy Lutsenko, claimed that Yovanovitch had given him a list of people he should not prosecute. The State Department dismissed the statement as baseless and Lutsenko later recanted his claim.

But critics, led by Giuliani, accused her of working to undermine Trump’s interests.

“The embassy in Ukraine was a ‘Hillary Clinton for president’ office. And they were looking to dig up dirt on President Trump,” Giuliani said. “There was a lot more collusion with Ukraine than in Russia, where there doesn’t appear to be any. They were trying to bring Trump down.”

Giuliani has not produced evidence to back up that assertion. As part of Senate confirmation hearings to ambassadorial posts, Yovanovitch reported she made several small contributions to Democratic candidates in the early 2000s, but none more recently.

Some former colleagues say she never voiced her U.S. political preferences and would not likely have tolerated such talk from embassy staff.

Yovanovitch, they said, is a notably private person and a stickler for details who often worked long hours. In Armenia, she pushed officials to ensure fair treatment of protesters arrested after contentious 2008 elections. Colleagues chose her for a State Department award given to an ambassador who shows extraordinary commitment to defending human rights.

She returned to Washington in 2012 and 2013, serving as the State Department’s day-to-day contact with U.S. officials in Europe. Lee Feinstein, the U.S. ambassador to Poland at the time, recalled extended conversations with Yovanovitch about how to calibrate negotiations over missile development and a continuing U.S. military presence there.

“She was always the kind of person who was very, very supportive of her ambassadors and looking to help them do their jobs better,” said Feinstein, now dean of the Hamilton Lugar School of Global and International Relations at Indiana University. “Never somebody who was trying to pursue her own agenda.”

—A running list of questions on the impeachment inquiry, answered
—Will the White House impeachment letter to House Democrats backfire?
—5 lessons history has taught us about impeachment
—What is CrowdStrike, the company Trump mentioned during his Ukraine call?
—NaftoGaz: Trump associates mixing politics and profits with Ukraine gas firm
—How whistleblowers have taken down titans of American business
Follow Fortune on Flipboard to stay up-to-date on the latest news and analysis.