Ouster of U.S. Ambassador to Ukraine Seen in New Light With Impeachment Inquiry 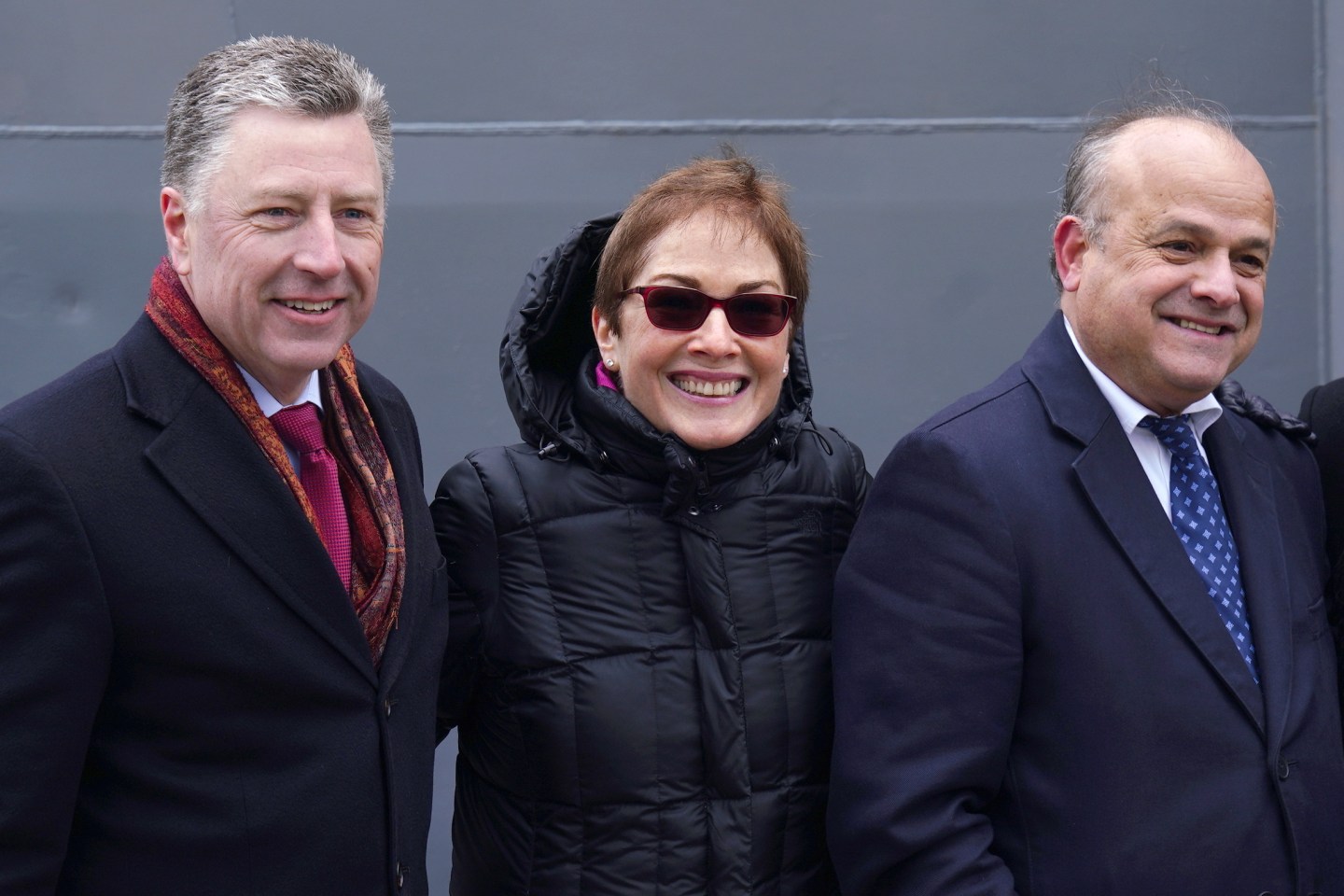 Months before the call that set off an impeachment inquiry, many in the diplomatic community were alarmed by the Trump administration’s abrupt removal of a career diplomat from her post as ambassador to Ukraine.

The ambassador’s ouster, and the campaign against her that preceded it, are now emerging as a key sequence of events behind a whistleblower’s complaint alleging the president pressured a foreign country to investigate his political rival.

In a letter Friday to Secretary of State Mike Pompeo, Sen. Robert Menendez demanded answers about the ouster of Ambassador Marie Yovanovitch.

“Why was the U.S. ambassador to Ukraine recalled in May 2019?” the Democratic senator wrote in a list of questions about what he called the “perversion of U.S. foreign policy” outlined by the whistleblower. “Did you approve that decision?”

Her recall gained little attention at the time, when many in Washington were preoccupied with escalating tensions with Iran. State Department officials said she was merely ending her term a few months ahead of a departure that had been scheduled for July. She kept quiet and moved back to Washington, remaining a diplomat but with a university fellowship and no fixed State Department assignment.

But, in private, many in the diplomatic community in the U.S. and around the world were appalled, believing she had been improperly removed from a sensitive post at a critical moment, as a new president without any previous political experience was taking office in a struggling country in dire need of American economic and military aid in an ongoing fight against Russia-backed separatists.

President Donald Trump said in his July 25 phone call with Ukrainian President Volodymyr Zelensky that Yovanovitch was “bad news” and that she is “going to go through some things,” according to the memo of the call released this week by the White House. But that characterization of her and her performance was contradicted by five current and former officials who spoke to The Associated Press.

The officials described Yovanovitch as a respected and highly skilled diplomat who was carrying out two main missions on behalf of the administration: Pressing the Ukrainian government to address long-standing U.S. concerns about public corruption in the East European nation and building support for Ukraine’s effort to fight the separatists.

In fact, it was only because elements of the Ukrainian government wanted her to ease up on pressing for investigations into corruption—and expected her to do so because they perceived Trump would care less about the issue— that they began a campaign against her, said the current and former officials, who spoke on condition of anonymity to discuss internal matters. That campaign gained steam with the arrival on the scene of Trump’s personal lawyer Rudy Giuliani.

At first, the officials said, Pompeo resisted the demands for her recall and argued she should complete her tour in Kyiv. Pompeo “was opposed to her early removal,” one of the current officials said. However, when it became clear that opposition to her was not receding, Pompeo arranged for “a soft landing” for her in Washington, according to the official.

Yovanovitch, a fluent Russian speaker, had previously served as ambassador to Kyrgyzstan and Armenia and had been deputy chief of mission at the embassy in the Ukraine from 2001 to 2004. The removal of the experienced diplomat, and Trump’s cryptic but apparently threatening comments about her, prompted protests this week from the diplomatic community.

“The threatening tone of this statement is deeply troubling,” the American Academy of Diplomacy said of Trump’s comments. “It suggests actions outside of and contrary to the procedures and standards of a professional service whose officers, like their military counterparts, take an oath to uphold the Constitution. Whatever views the administration has of Ambassador Yovanovitch’s performance, we call on the administration to make clear that retaliation for political reasons will not be tolerated.”

And, the American Foreign Service Association, the union that represents U.S. diplomats, called for all Americans “to honor and respect the non-partisan, non-political work” of the dedicated public servants of the Foreign Service. “We urge that their service, which at times is under the most serious hardship conditions and security risks, not be politicized, and that they not be dragged into partisan political battles.”

Efforts by the AP to reach Yovanovitch were unsuccessful.

The former and current officials said she was likely dismayed by the attention on her, which included a letter from Rep. Pete Sessions, a Texas Republican who lost his bid for reelection in November, to Pompeo seeking her dismissal because he had “notice of concrete evidence” that she had “spoken privately and repeatedly about her disdain for the current Administration.”

A former official said he knew of no such evidence and said it would have been unlikely for the diplomat to disparage any administration. Sessions did not respond to questions about the letter forwarded to him through a spokeswoman.

Sessions was among GOP politicians and a Trump-affiliated political action committee who received campaign donations in 2018 from Soviet-born business partners, Lev Parnas and Igor Fruman. The Texas congressman received $5,400 of the nearly $500,000 given by the men, and met with one of them. They have been working with Giuliani on his investigation of the son of former Vice President Joe Biden, who served on the board of an energy company in Ukraine.

Over the next several months, a series of articles appeared criticizing the ambassador. Donald Trump Jr. referred to her and other ambassadors as “jokers” on Twitter and tweeted a link to one piece critical of her. Lutsenko then gave an interview alleging that Yovanovitch, who had been critical of the prosecutor in the past, had given him a “do not prosecute” list of people who should not be pursued, according to the whistleblower complaint. He publicly retracted that claim on April 17.

But the ambassador would be out of her position by the end of the next month. As the whistleblower noted: “I learned from U.S. officials with direct knowledge of the situation that Ambassador Yovanovitch had been suddenly recalled to Washington by senior State Department officials for ‘consultations’ and would most likely be removed from her position.”

–A running list of questions on the impeachment inquiry, answered
-White House punching back on impeachment with its Mueller strategy
–5 allegations made in the declassified whistleblower complaint
–What is CrowdStrike? Trump mentioned the company in his Ukraine call
-How impeachment momentum massively shifted among democrats
-The 25 most powerful womenÂ in politics
Follow Fortune on Flipboard to stay up-to-date on the latest news and analysis.