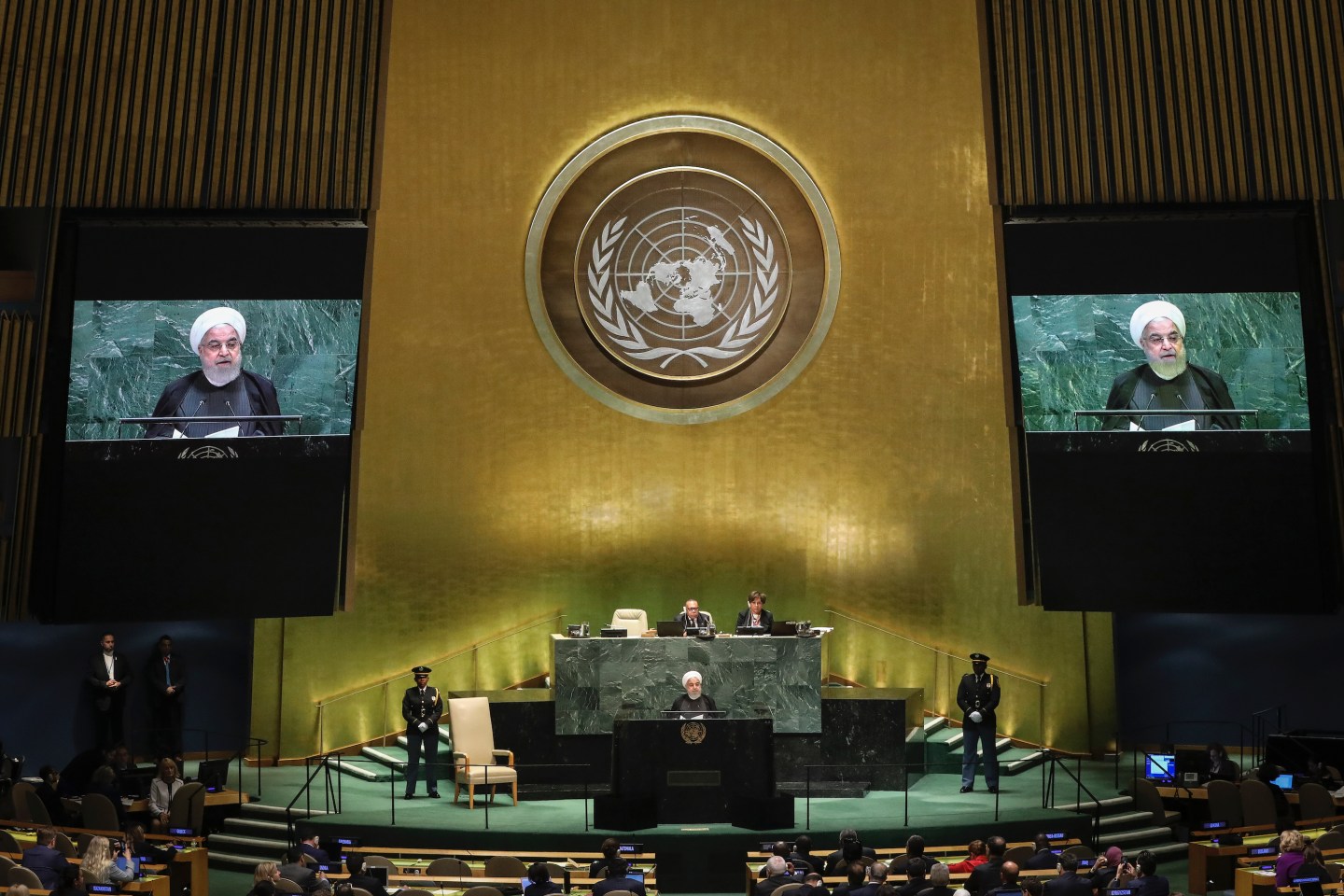 Iran’s president accused the United States of “merciless economic terrorism” on Wednesday, using his U.N. speech to stress that security in the Persian Gulf can be guaranteed only when his nation’s security is as well—and only with the involvement of Iran’s neighbors.

Hassan Rouhani told the U.N. General Assembly gathering that Iran would not negotiate on the issue of its nuclear program as long as sanctions remain in place.

“Our response to any negotiation under sanctions is negative,” he said. He said Iran has “resisted the most merciless economic terrorism” from a nation that is engaging in “international piracy.”

He spoke as his country’s nuclear deal with world powers unravels under pressure from the Trump administration. Iran has turned back to expanding its nuclear enrichment program after President Donald Trump’s decision last year to pull out of the accord and re-impose sanctions on Tehran, targeting its ability to export oil.

Rouhani’s highly anticipated remarks at the U.N. came a day after Trump described Iran as “one of the greatest threats” to the planet.

The escalating crisis has raised concerns that direct conflict, with Iran at the center, could break out in the region a scenario that all concerned parties, including Iran and Saudi Arabia, have stressed they want to avoid.

The United States has sent military reinforcements and beefed up its security presence in the Middle East in past months amid the rising tensions with Iran.

Rouhani’s manner during the speech was measured, but the words he delivered were ominous. “Our region is on the edge of collapse, as a single blunder can fuel a big fire,” he said.

The region will become secure when U.S. troops withdraw, he said.

Rouhani spent much time appealing to Iran’s neighbors, saying that their destinies are intertwined and they should consider each other rather than pinning their hopes on the involvement of the United States.

“Security shall not be supplied with American weapons and intervention,” he said. “Security cannot be purchased or supplied by foreign governments.”

Rouhani’s remarks come as the U.S. and its allies accuse Iran of being behind a major drone-and-missile strike on Saudi Arabia’s key oil sites earlier this month. Iran has denied any involvement and says any strikes by the U.S. or Saudi Arabia will lead to “all-out war.”

The Sept. 14 attack followed months of lower-level attacks on oil tankers and the shooting down of a U.S. surveillance drone over the Strait of Hormuz. The U.S. and its regional allies blame those attacks on Iran, which it also denies.

Trump, speaking at the U.N. on Tuesday, left open the possibility of diplomatic engagement with Iran. That was the same day that Rouhani insisted that he’d only consider meeting after sanctions against his country are lifted.

But as he ended his General Assembly speech, Rouhani suggested there was still some room for diplomacy.

“This is the message of the Iranian nation: Let’s invest on hope toward a better future rather than on war and violence,” he said. “Let’s return to justice, to peace, to law, commitment and promise and finally to the negotiating table.”

—The 25 most powerful women in politics
—Sanders vs. Warren: How their wealth tax plans differ
—Oprah has advice for the 2020 presidential candidates
—Higher U.S.-international postal rates loom before Christmas
—Can Andrew Yang win in 2020? Inside his unorthodox campaign
Get up to speed on your morning commute with Fortune’s CEO Daily newsletter.