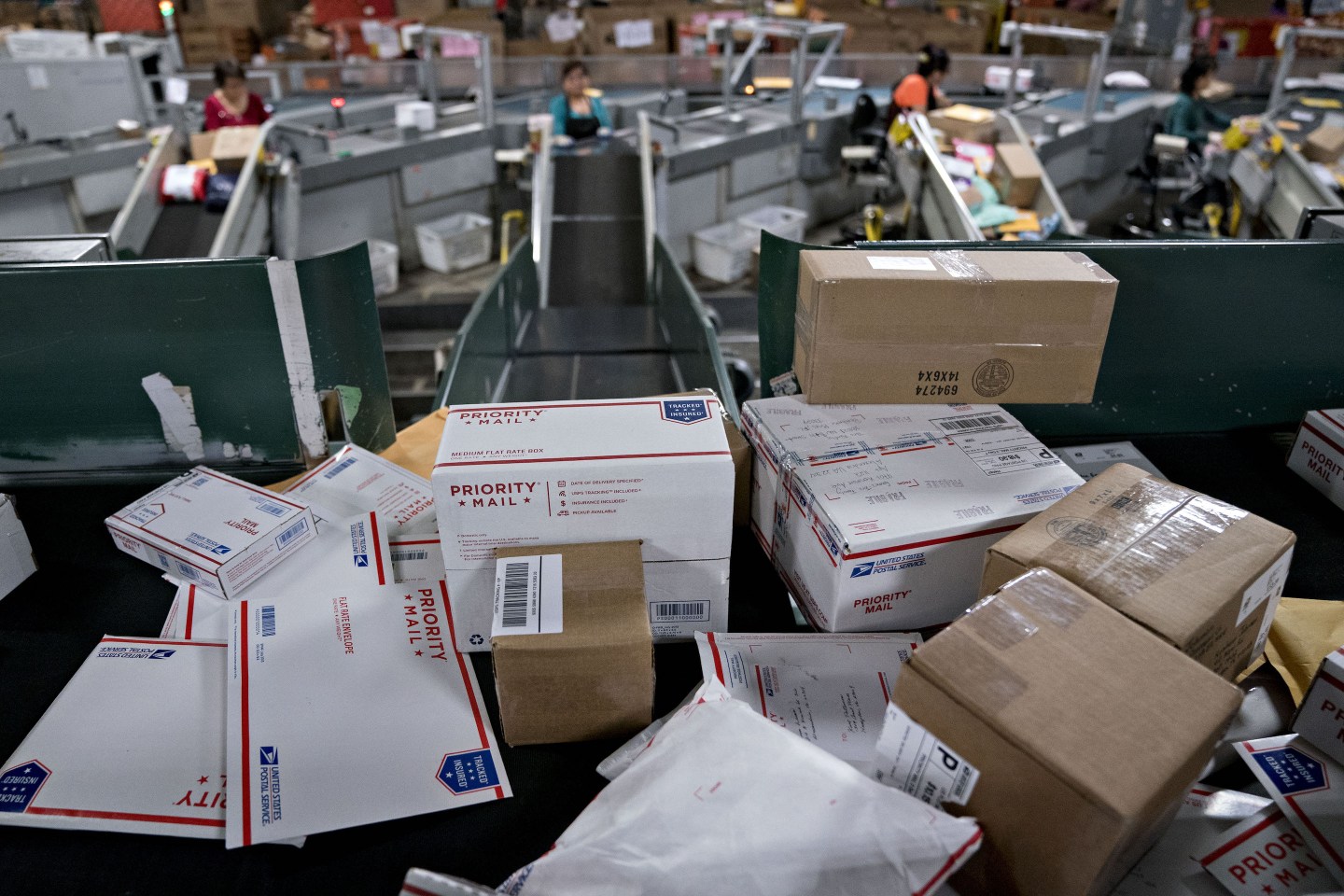 The effects of President Donald Trump’s standoff with China could soon be coming to a post office near you—and higher shipping rates for some types of mail are the likely outcome.

The Trump administration is threatening to pull the United States out of the 145-year-old Universal Postal Union, complaining that some postal carriers like China’s aren’t paying enough to have foreign shipments delivered to U.S. recipients.

A showdown looms at a special UPU congress that is being held Tuesday to Thursday in Geneva.

The complaint centers on the reimbursement the U.S. Postal Service receives for providing final deliveries of bulky letters and small parcels sent from abroad—usually ones not weighing more than 2 kilograms (about 4½ pounds). Such mail can include high-value items like mobile phones, memory sticks or pharmaceuticals.

Some have dubbed the withdrawal prospect “Pexit,” short for “Postal Exit” — a cheeky allusion to Brexit, Britain’s impending departure from the European Union, which likewise carries great uncertainties.

For consumers, the issue has largely been overlooked.

“Whatever happens, prices to ship via the postal network…It’s going to cost more,” said Kate Muth, executive director of the International Mailers Advisory Group, which counts companies like eBay, DHL, Amazon, USPS, or their affiliates as members. “The rates are going to go up.”

Companies might have to decide individually how to manage such increased rates, either by swallowing the costs or passing them on to customers.

One of the few companies to chime in publicly has been eBay, whose grassroots network has warned of possible “service disruptions and dramatically increased costs for shipping through the U.Ss Postal Service” if the United States pulls out.

The administration complains that China and many other countries get to pay lower reimbursements because they’re classified as developing countries, putting U.S. companies at a disadvantage. It wants postal services like USPS to set their own rates—and right away, not months from now.

“Today, manufacturers in countries as small as Cambodia and as large as China pay less to send small parcels from their countries to New York than U.S. manufacturers do to ship packages from Los Angeles to the Big Apple,” Trump trade adviser Peter Navarro wrote in the Financial Times on Sept. 11. He said other countries like Canada, Norway and Brazil are also losing money from the UPU’s “distorted system.”

Navarro said the U.S. opposes one of three options being considered that would maintain limits on the amount that postal systems like the USPS can charge overseas shippers.

The meeting may also be a test for a growing battle of diplomatic clout: China has been ratcheting up its presence in multilateral institutions, while the Trump administration has been largely shunning them.

The U.S. Chamber of Commerce and others have praised the Trump administration, which has led a multi-tiered challenge to China’s rising economic might notably on trade issues, for finally stepping up to try to level an allegedly unfair playing field that has been bemoaned by several U.S. administrations.

In a Sept. 16 letter to Navarro provided to The Associated Press, the chamber’s chief policy officer, Neil Bradley, wrote that the Trump administration’s walkout threat has put the UPU “on the brink of accepting the most meaningful reform to inter-postal compensation arrangements in 50 years.”

He wrote that the UPU reform debate “would never have materialized” without the “courage” of the Trump administration to contemplate withdrawal.

The State Department last year formally indicated that the United States would quit the UPU, an organization it helped create, on Oct. 17 if reforms can’t be agreed. The administration says the United States will start setting its own rates for reimbursement—so-called “self-declared rates”—whether or not it stays in.

It’s unclear what exactly would happen if the U.S. pulls out of the postal group. Some influencing factors include whether non-postal operators can fill the void or how soon bilateral deals between the United States and postal partners could be enacted. One thing many fear from the move: mail backlogs that start piling up.

—The story behind Biden’s son, Ukraine, and Trump’s claims.
—These are the 2020 senate races to watch
—Jeff Bezos details Amazon’s net-zero carbon emissions 2040 goal
—New York’s rape laws are now some of the toughest in the nation.
—Can Andrew Yang win in 2020? Inside his unorthodox campaign
Get up to speed on your morning commute with Fortune’s CEO Daily newsletter.