Giuliani’s Back in the Spotlight: A Look at His Role as Trump’s Personal Attorney 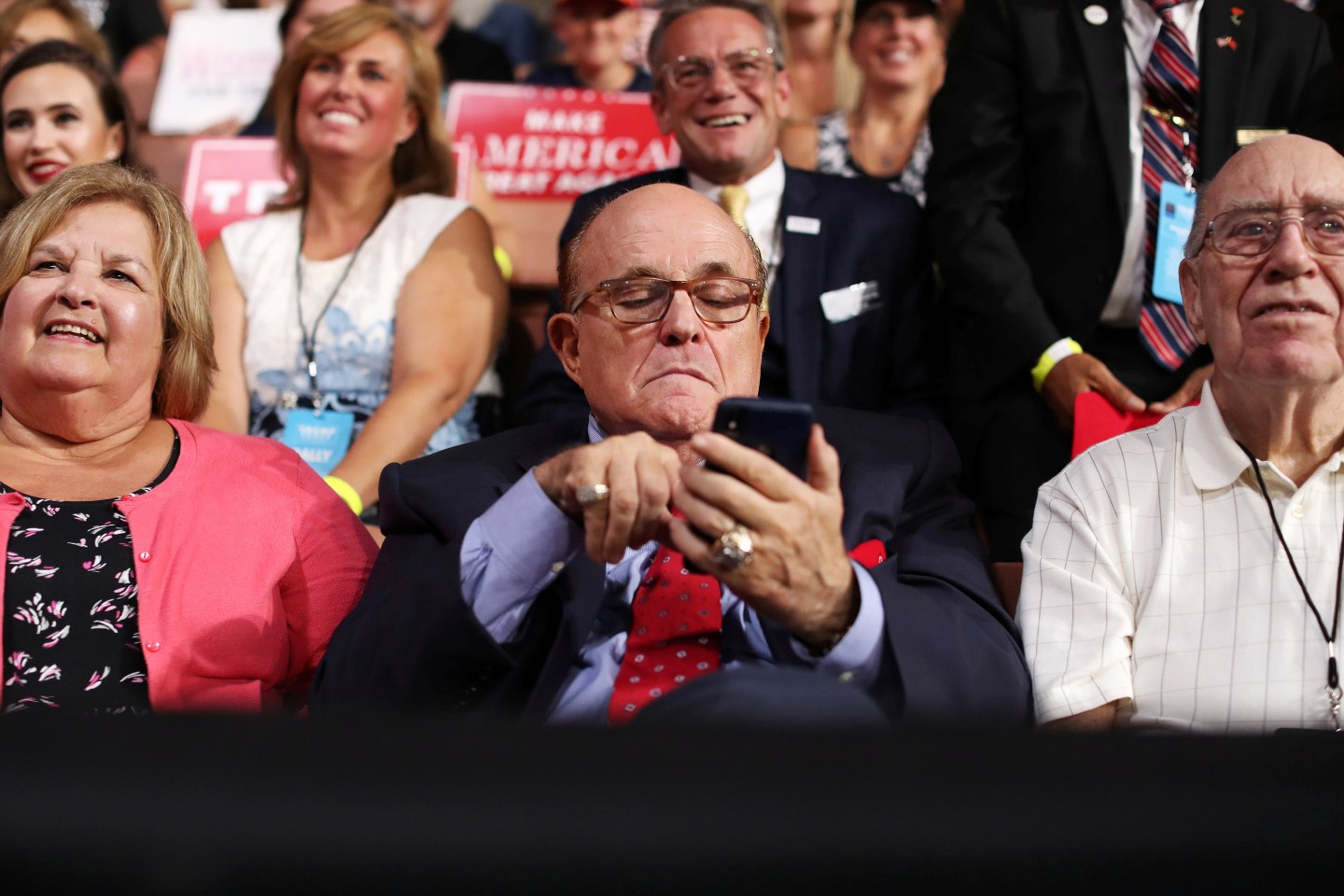 Rudy Giuliani, President Donald Trump’s personal attorney and a central figure in the whistleblower complaint, once again found a spotlight on his work in foreign countries when two of his clients—also figures in the complaint and ensuing impeachment inquiry—were arrested Wednesday night on campaign finance violations.

Giuliani has operated in a gray area, as something between a government envoy and campaign volunteer. As such, he has sidestepped the usual regulations that require disclosing who is paying him and whether they present any conflicts of interest.

Officials are pushing for that disclosure.

“The lines have been blurred intentionally, I think by President Trump,” said Kathleen Clark, a legal ethics professor at the Washington University in St. Louis. “But the key line is between campaign work and government work. Those lines have to be kept clear and Trump has blurred those lines.”

Part of what makes these lines blurry, is that Trump should have a better chance of asserting attorney-client privilege with Giuliani as his personal lawyer. That isn’t always the case with the White House Counsel, who serves in an official capacity advising on legal issues pertaining to not only the president, but that of the president’s administration. President Richard Nixon, for example, couldn’t stop his White House Counsel, John Dean, from testifying in the Watergate case.

Pat Cipollone, who penned the letter telling Congress the White House would not cooperate in Trump’s impeachment inquiry earlier this week, has filled the role of White House Counsel for Trump since 2018. But hiring a personal attorney is not unusual for a sitting U.S. president—Barack Obama, Bill Clinton, and Ronald Reagan all had them.

And Giuliani has endeared himself to Trump. The former New York City mayor was firmly in Trump’s political corner, championing him when key GOP members, including then-House speaker Paul Ryan, wrote off his candidacy. Giuliani’s loyalties got him shortlisted for secretary of state consideration in 2016; even then, some said his paid work for foreign governments may have jeopardized his shot.

Giuliani grew a private security and consulting firm that has worked with governments and private clients internationally. His Ukrainian work goes back to at least 2008 and has tripped a number of inquiries. Congress has issued a subpoena to Giuliani for documents related to the impeachment inquiry. Some of the documents they are asking for would also clarify his relationship to influential players in the Ukraine, who might have paid him for work.

Two of Giuliani’s clients, Lev Fruman and Igor Parnas, who were ensnared by the congressional inquiry, have been arrested for campaign finance violations. These businessmen, who live in Florida, connected the former mayor to Ukrainian officials and also pushed the issue of firing the former ambassador to the Ukraine, according to a July investigation by the Organized Crime and Corruption Reporting Project and Buzzfeed News. They were also hit with a congressional subpoena, which their lawyer responded to negatively.

Fruman and Parnas first drew attention when they made a $325,000 donation to Trump’s super PAC America First Action, Inc., through their company Global Energy Producers. Their donation bought access to a number of meetings with Trump and others, including Giuliani.

The watchdog group Campaign Legal Center filed a complaint with the Federal Elections Commission (FEC) in July 2018 pointing out that the company’s finances didn’t indicate they could make such a large donation and that the company was likely a shell for another undisclosed entity, which violates transparency elements of campaign finance law.

“The public is now learning just how dangerous dark money can be in U.S. elections, including the potential for illegal foreign funds, which DOJ says were used here,” said Trevor Potter, president of CLC, and a former Republican chairman of the FEC. “The fact that these two individuals were working with Giuliani and Ukrainian government officials to alter U.S. policy in that country will obviously be relevant to the impeachment investigation.”

Giuliani is accused of encouraging Ukrainian officials to dig into Hunter Biden’s role in a Ukrainian fuel company for Trump’s political gain, an effort coupled with holding back federal aid to the Ukraine, the issue at the heart of the impeachment inquiry. He has also said that his work has crossed into diplomacy.

“The ambassador to Ukraine was replaced,” Giuliani told the Associated Press. “I did play a role in that.”

Just as his clients’ have raised suspicions and triggered complaints, Giuliani’s work has, too. There aren’t enough facts yet to conclusively say if, or how, he might have violated standards. While the Congressional inquiry might clarify his role, it wouldn’t result in impeachment, since Giuliani is not a public official.

“Has he aided and abetted the president in committing an impeachable offense, in my opinion, yes,” said Margaret Taylor, a fellow in governance at the Brookings Institution and former Democratic chief counsel for the Senate Foreign Relations Committee. “But that, alone, does not constitute a violation of criminal law.”

But what is drawing increasing concern is the lack of transparency into Giuliani’s clients.

In 2018, five Democratic Senators asked the Department of Justice to review whether Giuliani was compliant with the Foreign Agents Registration Act, which “requires persons acting as agents of foreign principals in a political or quasi-political capacity to make periodic public disclosure of their relationship with the foreign principal, as well as activities, receipts and disbursements in support of those activities.” They renewed their request in September, as the impeachment inquiry was ramping up.

“He is acting in diplomacy with support of the state department,” said Brendan Fischer, director of federal reform at Campaign Legal Center, which initially filed the complaint against Fruman and Parnas. He emphasizes that it’s still unclear who Giuliani’s clients are and what they are asking him to do so whether he violated the law remains to be seen. “But despite all this, he is not obligated to disclose sources of income the way a person engaged in high level diplomacy required to do.”