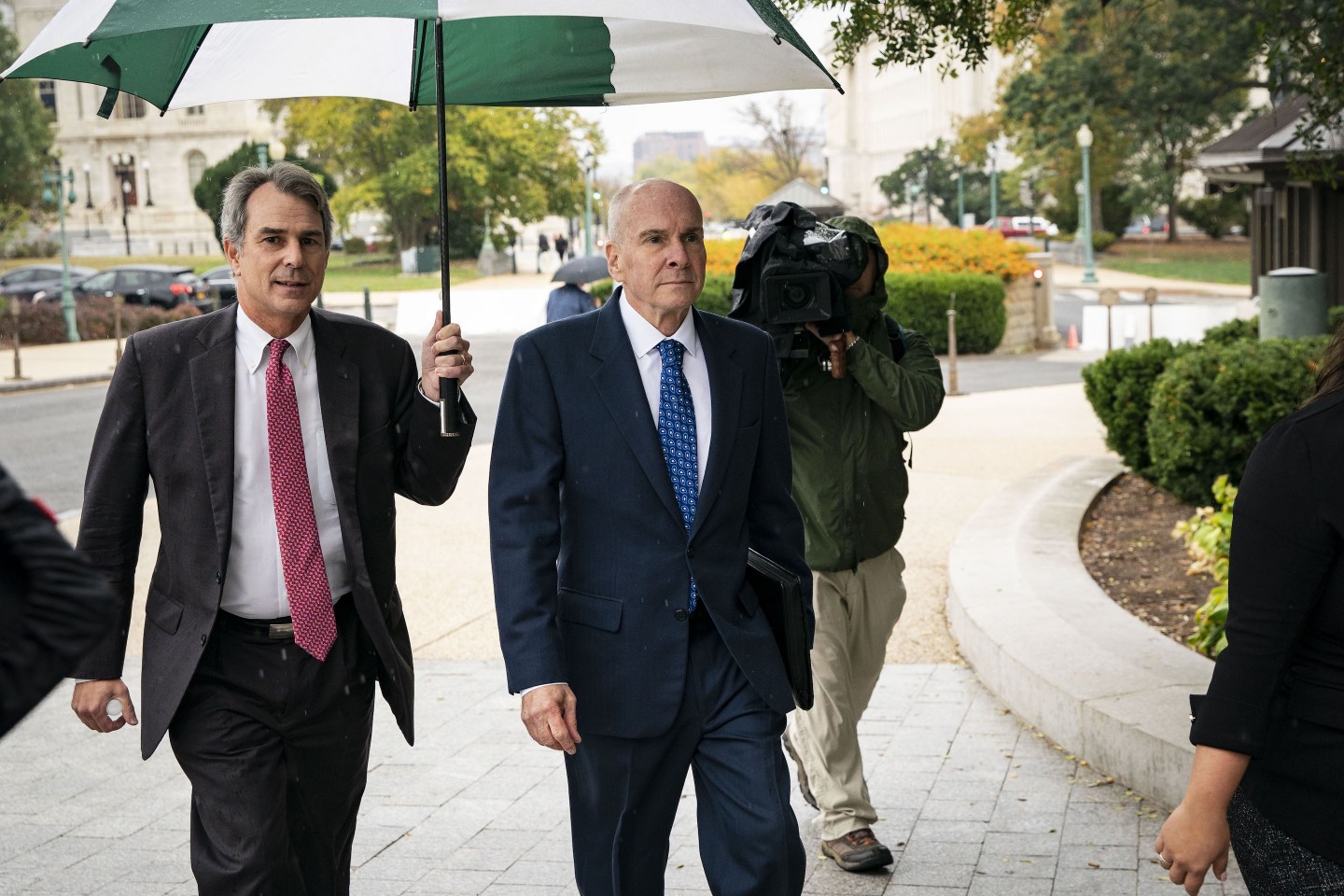 The House impeachment inquiry of President Donald Trump is exposing more details about unease in the State Department and White House about Trump’s actions toward the Ukraine and those of his personal lawyer Rudy Giuliani.

On Wednesday, Michael McKinley, a former aide to Secretary of State Mike Pompeo, told impeachment investigators he was “disturbed” by Trump administration efforts to obtain negative information on political opponents, according to a former colleague. McKinley, a career foreign service officer and Pompeo’s de facto chief of staff, said he resigned last week because he “could no longer look the other way” as colleagues were denied professional support and respect.

McKinley’s concerns included the treatment of the U.S. ambassador to Ukraine, Marie Yovanovitch, and others who worked on the Ukraine portfolio, according to a person familiar with his testimony. A Latin America specialist, McKinley wasn’t directly involved in Ukraine policy, but as a senior adviser to Pompeo was generally aware of the situation, the person said.

The 37-year veteran of the diplomatic corps was known to be unhappy with the state of affairs, although his farewell note to colleagues mentioned nothing about the reason for his departure other than it was a “personal decision.”

Another key figure in the impeachment investigation, former Ukraine special envoy Kurt Volker, returned to Capitol Hill on Wednesday. He and his lawyer were to review the transcript of his Oct. 3 testimony to investigators, according to a person familiar with his appearance who was not authorized to discuss it. Republicans say all the transcripts from the investigation should be released to the public.

Volker provided text messages to lawmakers that revealed an effort at the State Department to push Ukraine’s leader into opening an investigation of the gas company Burisma, connected to Joe Biden’s son, in return for a visit with Trump.

That effort soon escalated into what one diplomat feared was a quid pro quo for U.S. military aid. Trump has denied this, saying assistance to Ukraine was delayed to pressure the country into addressing corruption.

The testimony so far from the witnesses, mainly officials from the State Department and other foreign policy posts, is largely corroborating the account of the government whistleblower whose complaint first sparked the impeachment inquiry, according to lawmakers attending the closed-door interviews. (Read a copy of the whistleblower complaint here.)

Trump’s July 25 phone call in which he pressed Ukraine’s president to investigate the Bidens is at the center of the Democrats’ inquiry. (Read a White House memo about the call here.)

Speaker Nancy Pelosi, despite intensifying calls from Trump and Republicans to hold a formal vote to authorize the House Democrats’ impeachment inquiry, showed no indication she would do so. She said Congress will continue its investigation as part of the Constitution’s system of checks and balances of the executive.

“This is not a game for us. This is deadly serious. We’re on a path that is taking us, a path to the truth,” Pelosi told reporters after a closed-door session with House Democrats.

Democratic leaders had been gauging support for a vote to authorize the impeachment inquiry after Trump and Republicans pushed them for a roll call. Holding a vote would test politically vulnerable Democrats in areas where the Republican president is popular.

Trump calls the impeachment inquiry an “illegitimate process” and wants to block officials from cooperating, although his declarations haven’t had much effect.

The inquiry is moving quickly as a steady stream of officials appears behind closed doors this week, some providing new revelations about the events surrounding the July 25 phone call between Trump and Ukrainian President Volodymyr Zelensky. It is on that call that Trump urged Zelensky to investigate a firm tied to political rival Joe Biden’s family and Ukraine’s own involvement in the 2016 presidential election.

Kent was concerned about the “fake news smear” against Yovanovitch, whom Trump recalled in May, according to emails obtained by The Associated Press.

Kent told the lawmakers that he “found himself outside a parallel process” and had warned others about Giuliani as far back as March. He felt the shadow diplomacy was undermining decades of foreign policy and the rule of law in Ukraine and that was “wrong,” said Rep. Gerry Connolly, (D-Va)..

“They called themselves the three amigos,” Connolly said Kent testified.

Kent also told them that Trump, through the Office of Management and Budget, which Mulvaney previously led, was holding up military aid to Ukraine while pressing Zelensky to investigate a Ukraine gas company linked to Biden’s son, Burisma Holdings.

As White House lawyers try to learn more about the handling of Trump’s July 25 Ukraine call, National Security Council lawyer John Eisenberg is coming under particular scrutiny, said one White House official. He was both the official who ordered that the memorandum of the call be moved to a highly-classified system and the one who involved the Justice Department in a complaint from the CIA general counsel. The latter caught the attention of the president, according to the official.

Another witness, former White House aide Fiona Hill, testified Monday that Bolton asked her to take concerns about Trump’s personal attorney Giuliani’s dealings in the Ukraine to Eisenberg. Bolton, then national security adviser, was so alarmed by Giuliani’s back-channel activities in Ukraine that he described him as a “hand grenade who is going to blow everybody up.”

In 10 hours of testimony, Hill, who was Trump’s top adviser on Russia, recalled to investigators that Bolton had told her he was not part of “whatever drug deal Sondland and Mulvaney are cooking up,” an apparent reference to talks over Ukraine.

Trump’s team won’t comply with the Democratic inquiry. Giuliani and Vice President Mike Pence became the latest officials refusing to cooperate. The Defense Department said in a letter to the panel Tuesday it, too, could not comply with the request for documents. Among the grounds it cited was that the House hadn’t taken a formal vote authorizing the impeachment inquiry.