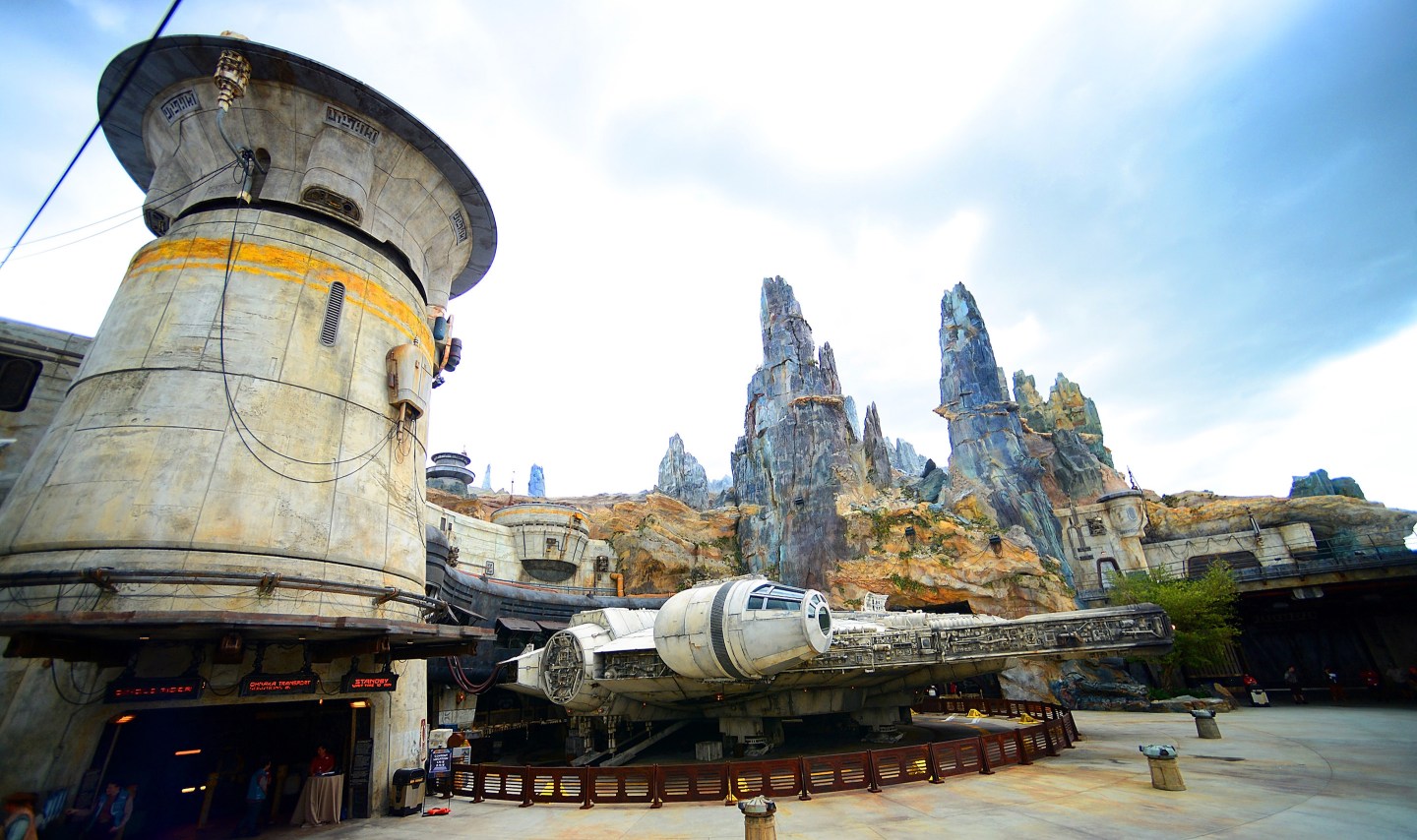 Instead of rides that push the limits of speed, heights, and thrills, the world’s largest theme park operators are hoping a big investment in technology will keep luring guests through their gates.

Immersive experiences, facial recognition, and virtual reality are being leaned on heavily in the near future to grow the multibillion-dollar industry, with operators forced to innovate and reinvent themselves to keep up with the ever-evolving interests of parents, teens, and tykes—and offer more flexible options for those who don’t necessarily want to spend an entire day at a park.

Here’s what the big players in the space have planned or are considering:

It’s all about immersion

Walt Disney might have seen some woes with the launch of Star Wars: Galaxy’s Edge this year. But as the No. 1 theme park operator in 2018 (with $4.5 billion in operational profits, per the International Association of Amusement Parks & Attractions), the Mouse House is emphasizing immersive, personalized adventures both inside and outside its parks.

The Star Wars–themed Galactic Starcruiser hotel, named the Halcyon, will transport guests from Orlando to an immersive two-night hotel experience that feels far, far away.

Much like being on a cruise ship, guests will arrive together and depart together and have the option to have much of their time programmed with a multitude of things to see and do. Disney is working to make guests feel like part of the Star Wars universe from the moment they arrive. Stepping into a simulated space pod (a heavily screened entrance elevator), guests will be whisked away to their Starcruiser.

Upon arrival, activities “onboard” will include lightsaber battles, pilot training, themed dinners, major character interactions, and more. Each guest cabin will feature ever-evolving “views” into space.

Light or Dark side of the Force? That will be up to visitors.

“Be wary of who you make allegiances with,” Ann Morrow Johnson, executive producer and creative director of Walt Disney Imagineering, said at its D23 announcement in August. “The choices you make affect the course of your journey and ultimately determines how your Star Wars story unfolds.”

This will play out during visitors’ stays and even in day-trip excursions to the planet of Batuu, a.k.a. Disney’s Hollywood Studios’ Galaxy’s Edge.

Using technology similar to the Starcruiser’s space pod entrance and rooms, this restaurant will provide panoramic views of the space station along with day and night views of Earth for patrons to feel as though they’re amongst the stars.

Across town, Universal Studios Orlando is hard at work on its third gate, Universal’s Epic Universe—the first brand-new theme park in the area in over 20 years (Disney’s Animal Kingdom launched in 1998).

Expected to open in 2023, this 750-acre development will nearly double Universal’s presence and will also focus on the immersive approach.

At a Bank of America Merrill Lynch conference in September, Tom Williams, chairman and CEO for Universal Parks & Resorts, said the new area will be “the most immersive and innovative theme park we have ever created.”

While Universal itself has been fairly quiet since its initial announcement, a giant park with four distinct lands is evident in its released renderings.

The park will also feature one main entrance area—similar to Universal’s City Walk—showcasing dining, shopping, and a new hotel (the first hotel to be “attached” to a park for Universal Studios). This area will act as a hub that will funnel guests to the four new areas separately.

While a master ticket for the four lands seems inevitable, park experts have proposed Universal will offer a “micro ticket” to each of the separate lands. This could give a customized feel for visitors while also enabling locals more of a chance to spend just a few hours inside the park accompanied by dining or other entertainment. It could allow guests to treat the themed lands similar to dinner and a movie, as opposed to an all-day adventure.

Meanwhile, China’s $3-billion-plus development—Universal Studios Beijing—set to open in 2021, last week announced a slightly controversial development in the works: Universal’s foray into facial-recognition technology. The technology is owned by Chinese online giant Alibaba and will scan guests’ faces to determine if they’ve paid for entry or not. China already has facial-recognition devices in place for its subways and airports.

Though U.S. airports have been using similar technology for a while now to help with security, when Ticketmaster and Live Nation tried to implement something similar for concerts it did not go over well with music fans.

It’s not clear if the technology will come to theme parks stateside just yet. Universal declined to comment about the prospect, stating simply, “We will have more to announce on Universal’s Epic Universe in due time.”

While it seems inevitable Super Nintendo World will anchor Orlando’s Epic Universe, Universal Studios Japan will get the debut first in 2020 (prior to the all-important Summer Olympics) with some elements of gaming relatively new to parks.

“The whole land [will be] interactive. You are going to have a wristband that’s got the big red Mario symbol on it. It’s all magnetic. You slap it at your wrist, and it won’t come off,” Williams elaborated during September’s conference. “You will be able to go up and keep score and play with various games. That also translates to score-keeping capability, if you choose to do so within the rides, and it actually interfaces back with your game console.”

This will allow gamer-minded guests to come back again and again, building on their scores and achievements presumably via their Nintendo Switch or future consoles from Nintendo.

In 2016, Universal Studios Japan and England’s Alton Towers kicked off the virtual reality roller coaster craze to what was expected to be the next hot ticket for theme parks.

Six Flags, Sea World, and dozens of other park operators across the world followed suit in 2017 and 2018 mainly as a low-cost way to reinvent older coasters and make it feel new.

It didn’t take off.

Mandatory VR headsets for these roller coasters often came with a set of issues like much longer wait times paired with an ever-evolving tech market, time consuming sanitation woes, and feelings of repetition for guests.

So, where does this leave the future of VR?

Disney has decided to leave VR right outside the parks in its Downtown Disney and Disney Springs locations.

Partnering with mixed-reality company The Void, guests can don VR headsets and grab blasters to enter the virtual worlds of Wreck-It Ralph, Star Wars, and the just-announced Marvel’s Avengers–themed experiences.

The Void setup allows guests to truly be part of the story by allowing them to walk around and explore different rooms, interact with environments, and take on team challenges. Legoland is taking a stationary version of its Great Lego Race VR coaster to malls for guests to get a taste of what they can experience at their parks.

Both seem to see VR as a way to drum up excitement for their already existing properties and engage their fan bases in new ways.

And while virtual reality might be quickly fading from the theme parks scene, experts expect augmented reality, like what Star Wars: Galaxy’s Edge’s ever-evolving DataPad app has introduced, to soon become a bigger part of the overall experience as an easy, low cost, (and optional) enhancement for parks around the globe.

—1,000 artists boycott Amazon over its ties to ICE
—Apple TV+ hits Friday. Its series largely miss the mark
—Thanos creator Jim Starlin reflects on the MCU and the comic book industry
—Game of Thrones creators’ busy schedule means no “10-year drunken party” with Star Wars
—The most popular famous faces this Halloween are…
Follow Fortune on Flipboard to stay up-to-date on the latest news and analysis.