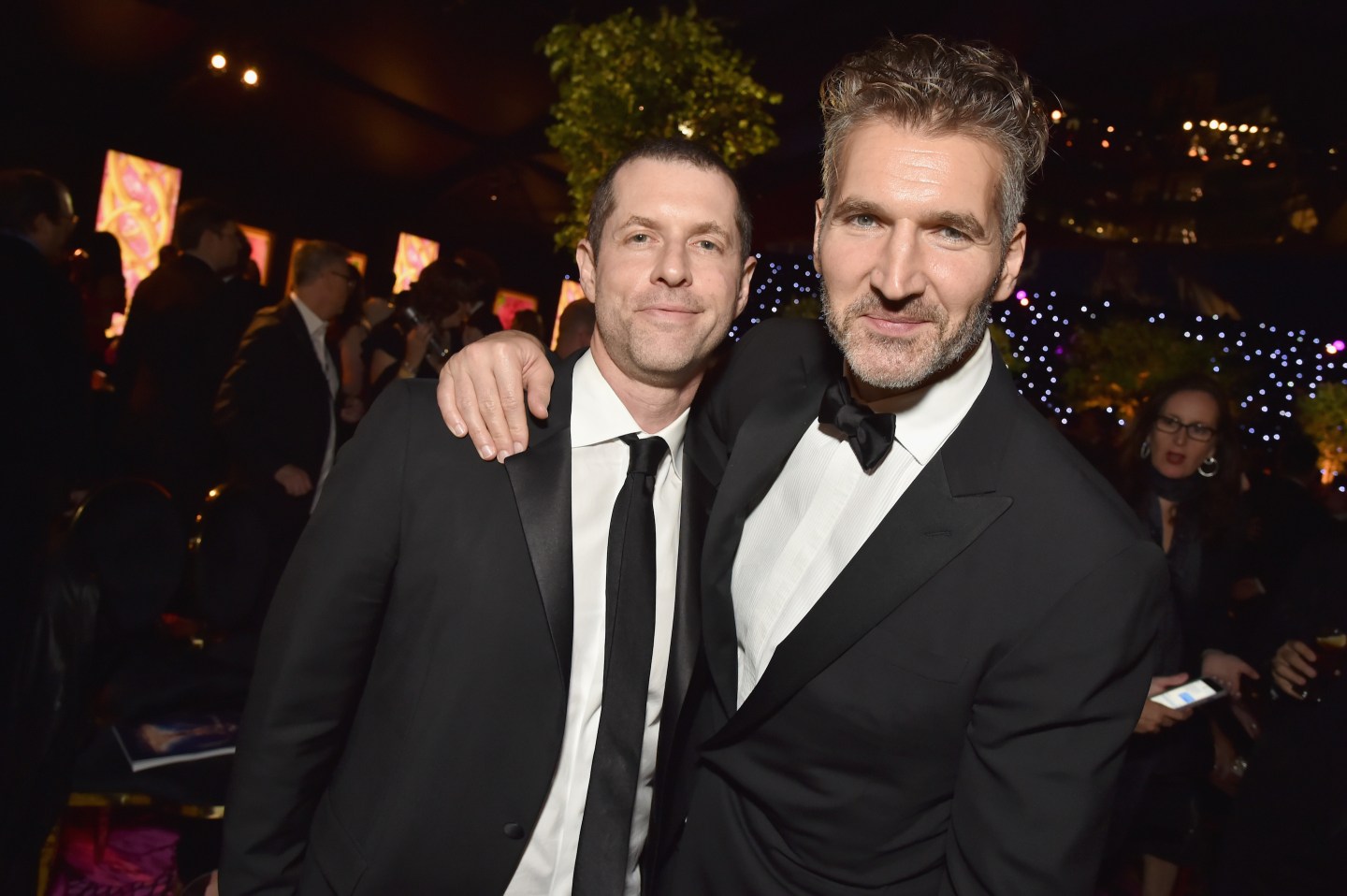 The galaxy far, far away will stay just that for Game of Thrones showrunners David Benioff and D.B. Weiss, who will no longer team with Disney-owned Lucasfilm to launch the next era of Star Wars in 2022.

Deadline broke news late Monday night that Benioff and Weiss had walked away from their lucrative deal with Lucasfilm to stage a new trilogy in the Star Wars sandbox. Their films, announced months ahead of Thrones‘ much-reviled final season, were to continue the Star Wars universe outside of the Skywalker-centric trilogy that will conclude with this year’s J.J. Abrams-directed The Rise of Skywalker.

“We love Star Wars,” the pair said in a statement to Deadline. “When George Lucas built it, he built us too. Getting to talk about Star Wars with him and the current Star Wars team was the thrill of a lifetime, and we will always be indebted to the saga that changed everything.”

Instead, Benioff and Weiss will turn their attentions fully to crafting new TV series for Netflix, with whom the pair have signed a lucrative pact worth more than $200 million (with some placing it as high as $300 million).

When word of that deal got out, many speculated it meant a separation was in store for Lucasfilm and the Game of Thrones showrunners. “There are only so many hours in the day, and we felt we could not do justice to both Star Wars and our Netflix projects,” the pair said in a statement to Deadline. “So we are regretfully stepping away.”

That be as it may, Benioff and Weiss severing ties with Star Wars still couldn’t have come at a more interesting time for those up in arms about the showrunners’ Thrones swan song on HBO.

Over the weekend, during a Saturday panel at the Austin Film Festival, Benioff and Weiss went minorly viral for reflecting on how poorly prepared they felt they were to tackle Game of Thrones, largely seen as having flamed out in its last season, with many on social media voicing anger and disappointment by what they saw as a sloppy and rushed finale to the series.

As quoted in a Twitter thread by in-attendance Thrones fan @ForArya (later backed up with audio from the event), the pair essentially used the panel to walk their audience through more than eight years of dramatic missteps, some exceedingly costly for HBO.

“Everything we could make a mistake in, we did,” one of them said, citing their casting choices, pilot script, and costume ideas as areas in which they stumbled out of the gate. For season one, they turned in 39-minute episodes, forcing HBO to ask them for 100 additional minutes to fulfill their contractual obligations. Such a demand was actually convenient, said the showrunners, since they’d forgotten to write key scenes between several characters who’d previously shared no screen time.

The pair speculated HBO’s decision to greenlight the series in the first place had more to do with foreign pre-sales than it did their preparedness for the job, adding that they lacked all but the most basic of TV qualifications when asked to sit down with A Song of Ice and Fire author George R.R. Martin. “We don’t know why he trusted us with his life’s work,” said Benioff. The pilot, they’ve repeatedly stated across years, was a mess in its initial form, necessitating heavy and expensive reshoots before it could be greenlit by HBO.

“It was like a 10-year drunk party,” Benioff went on to say, with Weiss comparing it to a very expensive film school for the pair. The two admitted they were more-or-less making it up as they went along, adding that they watered down fantasy elements and never sought to boil down all the books’ main ideas into their story, finding such a task too daunting.

The reaction on social media was largely critical, with many users pointing out that their success at HBO constituted a prime example of white men failing up in the entertainment industry in a way women and writers of color have not historically been allowed to.

At the very least, Benioff and Weiss won’t be continuing to work with HBO in the near future. Along with their Netflix deal came news that Confederate, the alt-history drama they’d sold to HBO, was finally dead as a doornail, following months of controversy over why two white showrunners wanted to create a fantasy-drama in which slavery was still legal in the modern-day United States. And the ax has kept swinging over at HBO; Deadline now also reports that a long-in-the-works Game of Thrones prequel pilot, written by Jane Goldman and starring Naomi Watts, will not be going forward.

In announcing the pair’s Star Wars exit in a statement to Deadline two days after the Austin Film Festival panel, Lucasfilm President Kathleen Kennedy didn’t burn any bridges. “David Benioff and Dan Weiss are incredible storytellers,” she said. “We hope to include them in the journey forward when they are able to step away from their busy schedule to focus on Star Wars.”

But all the same, Lucasfilm is said to be exercising extreme caution in crafting the next chapter of Star Wars, and the prospect of working with Benioff and Weiss can’t have grown more tempting after their Game of Thrones finale was roundly rejected by long-time fans of the fantasy-drama.

Though it’s working with Disney+ to premiere a number of series set in the galaxy far, far away (including The Mandalorian, arriving with the Disney-operated streamer on Nov. 12, and an Obi-Wan Kenobi series starring Ewan McGregor), the Star Wars films have always been more sacrosanct to Lucasfilm.

As such, it must have been agonizing for high-level Lucasfilm executives to watch their two “anthology” efforts to expand the series universe—2016’s Rogue One and 2018’s Solo—hit myriad snags throughout production, only to open to mixed reviews. Adding to that sting, Solo was a major box-office disappointment for Lucasfilm; its budget ballooned past $275 million, and the very weak $392 million it went on to collect globally means it’s considered (in Hollywood parlance) a box-office bomb.

The Last Jedi, though heralded by many critics as the best Star Wars film ever, ran afoul of fans (some acting in better faith than others) who detested its progressivism, comedic streak, characterization of an older Luke Skywalker (Mark Hamill), and disinterest in fulfilling long-time fan theories. Though much has been written about the ugly rhetoric driving some more vitriolic reactions to that film, the first Star Wars by contrast was in many senses the biggest populist blockbuster of all time when it was released.

Being on the receiving end of fan hate can’t have been a comfortable position for Lucasfilm; that may have been one reason why The Last Jedi director Johnson’s pre-planned new trilogy of Star Wars films was dated to arrive well after one from Benioff and Weiss, a maneuver that didn’t age particularly well when audiences and Lucasfilm executives both saw what they’d done with Game of Thrones.

Kennedy, who has for decades safe-guarded the Star Wars franchise, has previously shown herself willing to make tough decisions around the series’ future. She fired Chris Lord and Phil Miller off Solo midway through production after their penchant for experimentation led to one too many delays and a tone more outré and comedic than Kennedy had envisioned.

Abrams, who successfully reopened the galaxy far, far away with 2015’s The Force Awakens, will bring the trilogy home in this year’s The Rise of Skywalker, but that title was previously entrusted to Jurassic World helmer Colin Trevorrow. After more than two years attached to the project, he was fired in September of 2017; a statement at the time called Trevorrow “a wonderful collaborator” and alleged that the parting of ways had been mutual. Reporting since has indicated that wasn’t quite the case, and that Trevorrow and Kennedy weren’t seeing eye-to-eye on the project.

All of this is to say that, though Kennedy’s not one to publicly scorn filmmakers, she sees Star Wars as bigger than any one director’s vision and hasn’t been afraid to right the ship when she feels it’s going off-course. Given the disastrous fan backlash against Game of Thrones‘ final season, Benioff and Weiss aren’t publicly regarded as the master storytellers some could have seen them as in their Westerosi heyday. The real story of Benioff and Weiss’ time at Lucasfilm may leak out over months, even years, as did those surrounding production woes on Rogue One, Lord and Miller’s Solo exit, and Trevorrow’s firing off his intended trilogy topper. Or it could simply be a matter of the pair, as the official statements indicate, having already filled up their dance card.

The real story of Benioff and Weiss’ time at Lucasfilm may leak out over months, even years, as did those surrounding production woes on Rogue One, Lord and Miller’s Solo exit, and Trevorrow’s firing off his intended trilogy topper. Or it could simply be a matter of the pair, as the official statements indicate, having already filled up their dance card.

—The most popular famous faces this Halloween are…
—The streaming wars by the numbers
—More episodes of Evil and Prodigal Son are coming—but fall TV is missing breakout hits
—An inside look at the Kurt Cobain business
—Shea Serrano on Movies (and Other Things), and why he isn’t fully sold on showbiz
Follow Fortune on Flipboard to stay up-to-date on the latest news and analysis.