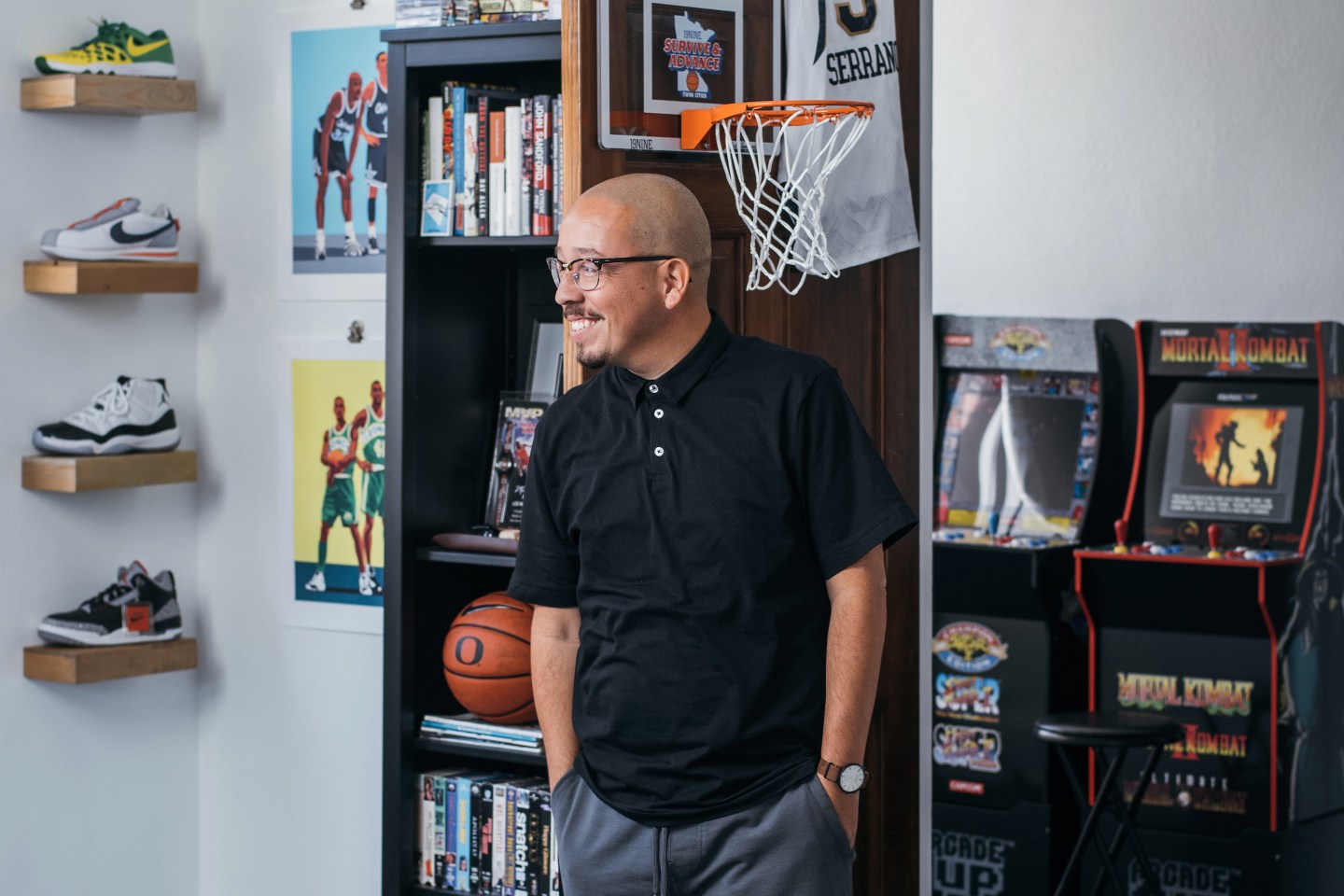 The book, a collection of 30 standalone essays about movies, tackles farfetched hypotheticals with both humor and footnoted rigor, in the same signature fashion found in Serrano’s two previous books about hip-hop and basketball.

In a phone interview with Fortune, Shea Serrano spoke about his influences, his latest book… and other things.

According to Serrano, the goal of Movies is not to be read as film criticism, nor is it to inspire others to watch the movies he references.

“I just want somebody to read it and feel better about things for a little while,” he says.

In Movies, Serrano asks the tough questions, such as “Who’s in the Regina George circle of friends,” and “Which was better: Get Out or The Social Network?” Many of the essays start with ground rules for each argument, but Serrano will often break his own rules, which is either funny or frustrating depending on your dedication to the bit.

Serrano’s popularity now affords him cameos from some of his subjects. In Movies, for example, Serrano’s work is sandwiched between a foreword by John Leguizamo and an afterword by Don Cheadle, who both use their pages to reflect on their relationship to television.

Despite his increased notoriety, Serrano doesn’t consider his closer proximity to his subjects when he writes. “I don’t think about that too much. I try to just assume that nobody’s ever going to read the stuff that I write,” he says, laughing.

But they do read it. Dwayne Johnson (or The Rock) recently tweeted to acknowledge he’d read the chapter focused on inserting The Rock into different movies, and the varying degrees of success it would have. Olivia Wilde posted a picture of Movies on Instagram, after discovering the book has a chapter dedicated to Booksmart, which Wilde directed.

Serrano’s focus and interest can be seen via a recent comment he made about 1955 heist movie Rififi in an interview with Esquire. He called the movie, “not that great,” giving rise to a rare occasion in which Serrano drew criticism from film fans and some professional critics.  Following up in a tweet, Serrano clarified that he is not a film critic, and instead “just a guy who likes rom-coms and the fast and the furious [sic].”

Though Serrano loves to write about television and movies, he’s not as keen to get into show business as one may think.

In 2017, Serrano pitched and sold a script with TV heavyweight Mike Schur based on Serrano’s home life, but it ended up “dead on the vine” and never went into production. Serrano only found out later he’d need to relocate to Los Angeles for five months if one of his scripts went to series. “I was like, fuck no, I’m not gonna go out there. I have a family. I’m not gonna leave my family for this long.”

As Serrano explains, the TV and movie industry is filled with people who are willing to face constant rejection in order to get their projects made, a passion that Serrano himself does not feel.

“That’s how I feel about working at The Ringer,” he says of his staff job. “If I had tried to get a job with The Ringer and they were like ‘Nah, we’re not gonna hire you,’ I would’ve just kept trying. Some stuff you care about and you want to figure it out.”

Serrano’s notoriety as a writer might be second to the grassroots audience he’s built and mobilized. Just as Lady Gaga has her Little Monsters and Beyoncé has the Beyhive, Serrano has the FOH Army. (Standing for Fuck Outta Here.)

“I 100% believe that if you write a book, a large part of the responsibility of getting people to read it falls on your shoulders,” Serrano explains. With nonfiction specifically, Serrano notes, there is a difficulty for authors who don’t have the name recognition of Chuck Klosterman (one of his first writing influences) or Malcolm Gladwell.

Serrano can recall the exact moment he decided to lean on his following instead of traditional media. His first book, Bun B’s Rap Coloring and Activity Book, released in 2013, was made in collaboration with Texas hip-hop legend Bun B. It received heavy press coverage, including promotion in Bun B’s television appearances. The book sold 900 copies in its first week, which Serrano describes as “not a great number, but not terrible.”

When his second book, The Rap Year Book, became available for preorder on Amazon in 2015, Serrano was preparing to drive from Houston to Corpus Christi. The preorder page had little information beyond the title of the book, Serrano recalls. He shared a link to the page with his approximate 30,000 to 40,000 followers, and drove for a couple of hours. When Serrano checked the Amazon page in Corpus Christi, it was a number one bestseller on Amazon.

“But I tweeted a thing. We drove down there, I checked it. And it was clear that people had bought it right then, a couple people sent me the screenshot. And I was like, ‘Oh shit, like they’re responding directly to the thing, the call to action.’”

At that moment, he decided “to handle this the way that the Houston rappers who I’ve been covering for years had been handling their careers for two decades.” Serrano says, referencing how these rappers, unable to get notice from New York or Los Angeles, would sell their music to people directly, slinging CDs and cassettes from the trunks of their cars.

But Serrano doesn’t just tap his audience to drive book sales. He often uses his audience to top off GoFundMes or raise money for charity or school supplies (Serrano was a teacher prior to his full-time writing career). In one outstanding campaign, he raised $90,000 for Hurricane Harvey relief efforts.

“Why would you not ask them to help out when you can?” Serrano says. After all, more often than not, Serrano is not promoting a new book, but he still has his audience. “I’m just supposed to sit there like a jackass and do nothing? Let’s do some cool shit. And we’ll all feel a little bit better about ourselves.”

When asked what movie he thinks about the most in his everyday life, Serrano brings up Blood In, Blood Out, a 1993 crime drama he describes as a Chicano gangster movie. This will not come as a surprise to Serrano’s fans, who recognize Serrano’s longtime Twitter profile picture as Miklo. Movies is also dedicated to the same half-white half-Mexican character.

Serrano identifies a specific line from Blood In, Blood Out that he repeats often. A prison gang leader tells Miklo, “You speak Spanish, guero. So do parrots.”

“The point of the line,” Serrano says,  “is just because you purport to be a thing doesn’t mean you’re the thing.”

—How your favorite TV shows make it from screen to stage on live tours
—Disney+ reveals its slate of feel-good unscripted fare
—Streaming wars will cost Netflix another $2 billion
—Spotify saved the music industry. Now what?
—Robert Eggers talks The Lighthouse, The Northman, and… Mary Poppins?
Follow Fortune on Flipboard to stay up-to-date on the latest news and analysis.