The Most Popular Famous Faces This Halloween Are… 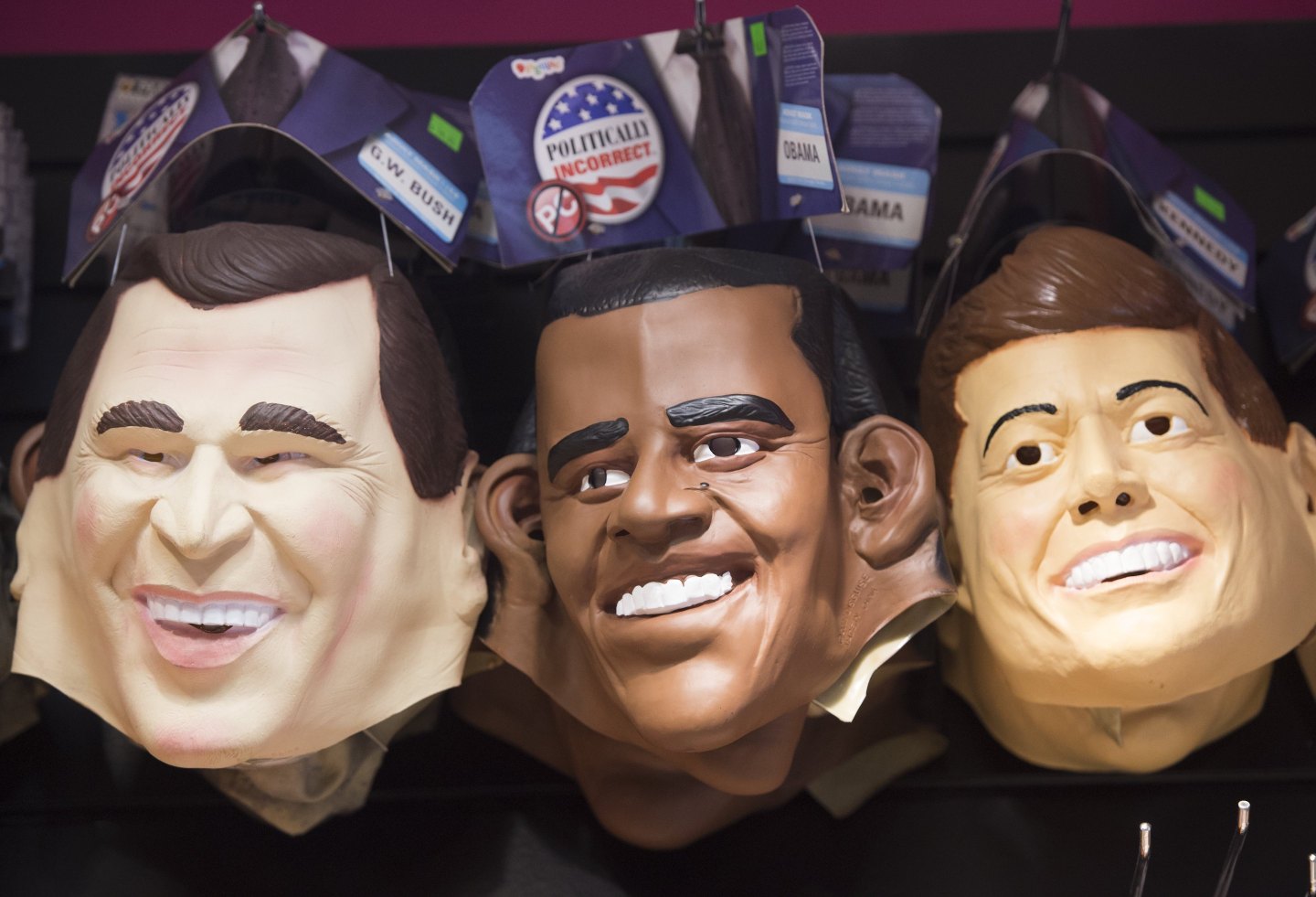 John F. Kennedy’s face is the top sold mask by Halloween Express for the second year in a row.

Though there’s no exact reason for the 35th U.S. president’s popularity, Brad Butler, chief operating officer of Halloween Express’s ecommerce operation, chalks it up to “politics [being] hot on everybody’s minds these days.”

After all, next on the list this year for Halloween Express’s most popular masks are “Giant Trump Mask” and one of Hillary Clinton. Then comes the classic Richard Nixon mask, followed by ones of Russian President Vladimir Putin and a vampire version of Barack Obama (called “Barakula”).

But that isn’t stopping the masses from turning to other famous faces for their Halloween costume inspiration.

“We’ve had requests for the ‘Felicity Huffman College Admissions Scandal Sexy Costume,’” Butler wrote to Fortune over email, “a costume we don’t carry.”

Masks make for easy, if not lazy, Halloween costumes. Certain famous faces seem particularly suited to mask form. The Nixon mask is almost a parody of a parody of itself at this point, worn by characters portraying bank robbers in multiple movies, from Point Break to Sugar & Spice.

And let’s not ignore the array of Donald Trump masks currently on the market, where they’re also proving to be popular overseas.  The U.S. president’s the current most popular mask at the U.K.-based shop Mask-arade. Queen’s Freddie Mercury comes next. It’s been “hugely popular since [Bohemian Rhapsody] came out,” says Ray Duffy, Mask-arade’s commercial director and one of the business’s founders in 2008.

In addition to selling realistic, 2-D masks of about 500 different celebrities, Mask-arade lets people buy customized masks of their own or friends’ faces. But famous faces are hugely popular. Beneath masks of world leaders like Queen Elizabeth, Putin, Kim Jong Un, Emmanuel Macron, and Boris Johnson (in descending order of popularity this year), Mask-arade’s top sellers include celebrity types like former Spice Girls Emma Bunton and Victoria Beckham (Baby and Posh, respectively), Daniel Craig, Ed Sheeran, and Justin Bieber. All make the company’s top 100 best sellers as of this writing, with Sheeran at 72 and Bieber at 98, both well below the Spice Girls.

Even celebrities want to dress up as celebrities. Gerri Halliwell, aka Ginger Spice, requested a Marilyn Monroe mask from Mask-arade about six years ago, Duffy says. Actor Helena Bonham Carter once commissioned a Mask-arade mask of Tim Burton, her husband at the time.

Like the Spice Girls, other famous faces stand the test of time in Mask-arade’s shop. Psy, the South Korean musician behind the wildly popular 2012 single/YouTube sensation “Gangnam Style,” remains a “really, really popular character that we get,” says Duffy. So does George Michael, Mask-arade’s 81st most sold mask so far this year. Operating a British shop, Duffy notes that Mr. Bean—the bumbling man-child portrayed by actor Rowan Atkinson—is “constantly in our top ten.”

Why do some celebrity faces endure as popular masks while others fade away?

“If I knew the answer to that, I’d be a millionaire,” says Duffy. “I guess some of them capture the Zeitgeist. They’re just part of our awareness.” Like Psy—Duffy calls him a “character, a caricature almost…it’s things like that that allow somebody to have great longevity.”

“It truly is about mostly fashion, trends, and popular culture,” says Butler about one celebrity face’s popularity over another. “We just try to produce what people want to buy and predict it in advance.”

Predicting it in advance can be the hard part. Mask (and other costume) retailers generally attend trade shows to meet with distributors and manufacturers, where they try to figure out the hot costumes for the upcoming Halloween season. The first tradeshow Butler will attend for Halloween 2020 will take place in November 2019. “How do you know what’s going to be a popular in a year or 10 months from now?” he asks. “A lot of it is guessing.”

Butler remembers during the 2010 Grammy Awards when Lady Gaga received five awards, including Song of the Year for “Poker Face.”

“Lady Gaga wasn’t a thing in November or January, when the manufacturers were looking at costumes,” he says. Her newfound popularity took the industry by surprise. A number of manufacturers, most of which are based in China and other Asian countries, ended up getting Lady Gaga licensing deals late. The costumes had to get flown into the U.S., when they usually arrive here via shipping containers.

Lucky for retailers like Butler, the movie industry plays a big role in which costumes will be most popular, and its schedule tends to be “known more than a year in advance,” he says. “But who knows? Something weird could happen in politics or entertainment between now and next October, and we’ll be scrambling to figure out how to make a costume for that.”

How does a celebrity likeness become a Halloween mask? Manufacturers can approach celebrities or their representatives to strike a licensing deal, or vice versa. Mask-arade, for instance, works with Bravado, which in 2019 acquired Epic Rights, which works on deals for artists ranging from Def Leppard and KISS to Madonna and Britney Spears. Mask-arade has purchased “a lot” of licenses over the years, says Duffy, essentially to hedge their bets on what could get popular.

Actors and singers can earn royalties from their likenesses appearing on these masks, usually through contracts with their agents. Most are hands off in the process, but some take more interest. “Mr. Bean, for instance—he will actually sign off and approve whether something gets made or not,” Duffy says, presumably talking about Atkinson. Meanwhile, other celebrities will say no to Mask-arade selling their faces, but Duffy wouldn’t say who they are.

For politicians, however, it’s a different game. According to this Slate article written about the “scariest” political Halloween costumes during the first time Hillary Clinton ran for president, it’s our First Amendment right to “speak out about—and mock—our leaders.” It’s highly unlikely that Trump is earning royalties from the plethora of masks this Halloween.

Ultimately, Butler describes a distinction between when people dress up like a “celebrity” versus wear a mask of one. “With Lady Gaga, for example, we didn’t have a mask for her. We had an outfit—a costume. In celebrity cases, it isn’t really about masks,” he says. “Masks tend to be more for mocking or just instant shock effect.”

—The streaming wars by the numbers
—More episodes of Evil and Prodigal Son are coming—but fall TV is missing breakout hits
—An inside look at the Kurt Cobain business
—Shea Serrano on Movies (and Other Things), and why he isn’t fully sold on showbiz
—How your favorite TV shows make it from screen to stage on live tours
Follow Fortune on Flipboard to stay up-to-date on the latest news and analysis.