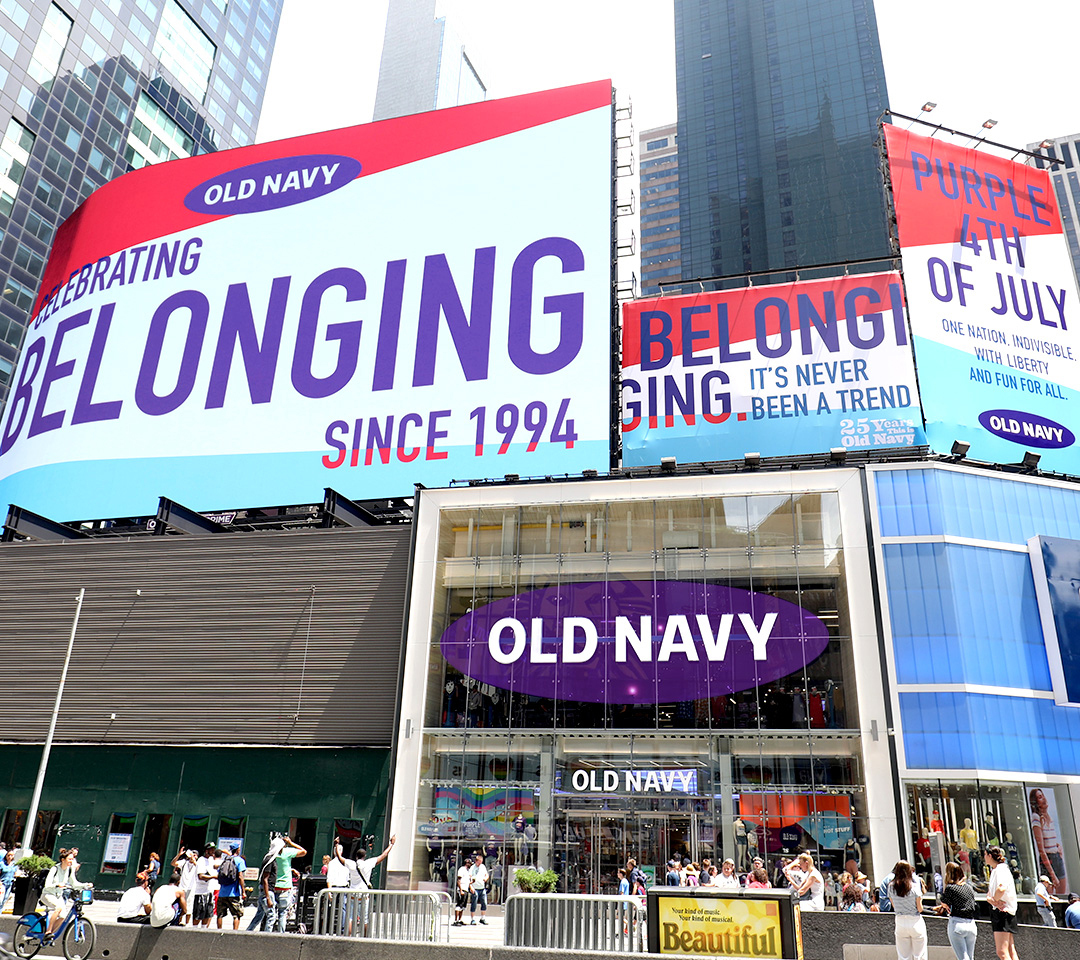 Although the color isn’t associated with American patriotism, the fashion retailer, starting today, is leaning into the hue for the Fourth of July as a sign of unity—a blend of Old Glory’s red, white, and blue.

The company has created a digital Purple 4th pop-up shop “with all the purple items Americans need to celebrate belonging,” according to the company. (Purple flag t-shirts are already almost sold out—only 1,994 were made, in honor of Old Navy’s 1994 founding by Gap Inc.) To further celebrate, its navy logo on social media, and on its Times Square store, is now purple.

Although not specified by the company’s campaign, its Purple 4th message of unity and inclusion comes at a particularly divisive political time in the U.S.

“Businesses have an opportunity, and a responsibility, to be a force for good,” an Old Navy spokesperson said. “Our decision to celebrate Old Navy’s 25th birthday with purple is illustrative of what can happen when the flag’s emblematic colors of red, white, and blue come together. It’s not about taking sides, it’s about leaning across the aisle—finding a place of understanding and respect that exists in the middle.”

Open to All a focus

Additionally, Old Navy is donating $25,000 to Open to All, of which it’s a founding member, along with parent company Gap Inc., and its Banana Republic. Started in 2018, the anti-discrimination group of businesses, as well as nonprofits, labor, community, and religious entities, furthers the understanding that companies and services “maintain a welcoming and safe environment for all people—including employees, visitors, customers, vendors, and clients.” To this end, Open to All members have signed a pledge.

Open to All started in the wake of the Masterpiece Cakeshop v. Colorado Civil Rights Commission. In that case, the U.S. Supreme Court, on the basis of freedom of religion, ruled a Colorado baker was within his constitutional rights for refusing to make a cake for a gay couple. This occurred before same-sex marriage was recognized in the state.

“We know that regardless of laws, the experiences of people of color, people of minority faiths, people with disabilities, immigrants, speakers of languages other than English, the LGBT community, and others don’t always reflect those values,” according to Calla Rongerude, campaign manager at Open to All. “The Open to All pledge is less about following a law—in the case of women, LGBT people, and immigrants, there is no federal law ensuring fair treatment in places of public accommodation—and more about creating a culture of inclusion and fairness.”

Although businesses in the U.S. aren’t legally allowed to discriminate against shoppers, there have been incidents of alleged racial profiling and LGBT discrimination over the past few years, including at Old Navy stores.

In 2018, Old Navy fired three employees at a West Des Moines, Iowa store, after a video went viral on the internet in which workers were shown accusing a customer of stealing a jacket. Just last week, the company apologized to a Canadian customer who asked to see proof of purchase for the shirt she was wearing, which still had tags on it.

In April, Grammy-nominated singer-songwriter SZA took Sephora to task on social media after a sales associate called security about her. She tweeted, “Lmao Sandy Sephora location 614 Calabasas called security to make sure I wasn’t stealing . We had a long talk. U have a blessed day Sandy.” On June 5, Sephora closed all of its U.S. stores for one hour for a diversity workshop.

Customers shopping with their values

The data represents the shift from “customer-as-buyer,” said Jill Standish, senior managing director and head of retail at Accenture.

“We are moving from a retail industry whereby the consumer is hyper-focused on convenience to one that may be hyper-focused on social issues such as [diversity and inclusion] and climate change. We also are living in a time where tech and social media is ubiquitous and issues spread like wildfire/go viral within hours and can create a movement,” Standish said.

Internet-savvy millennial and Gen Z consumers recognize the connection between social issues and shopping, Standish said. “They are most certainly shopping with their values, which is a trend we expect to get stronger,” she explains. “U.S. companies that stand for something bigger than what they sell, tune into customers’ beliefs, and take decisive action on social issues, are more likely to recast their customer relationships and connect with consumers on a deeper level.”

—GameStop wants to be the ‘local church’ of gaming