Why Pride Month Is More Important Than Ever: RaceAhead 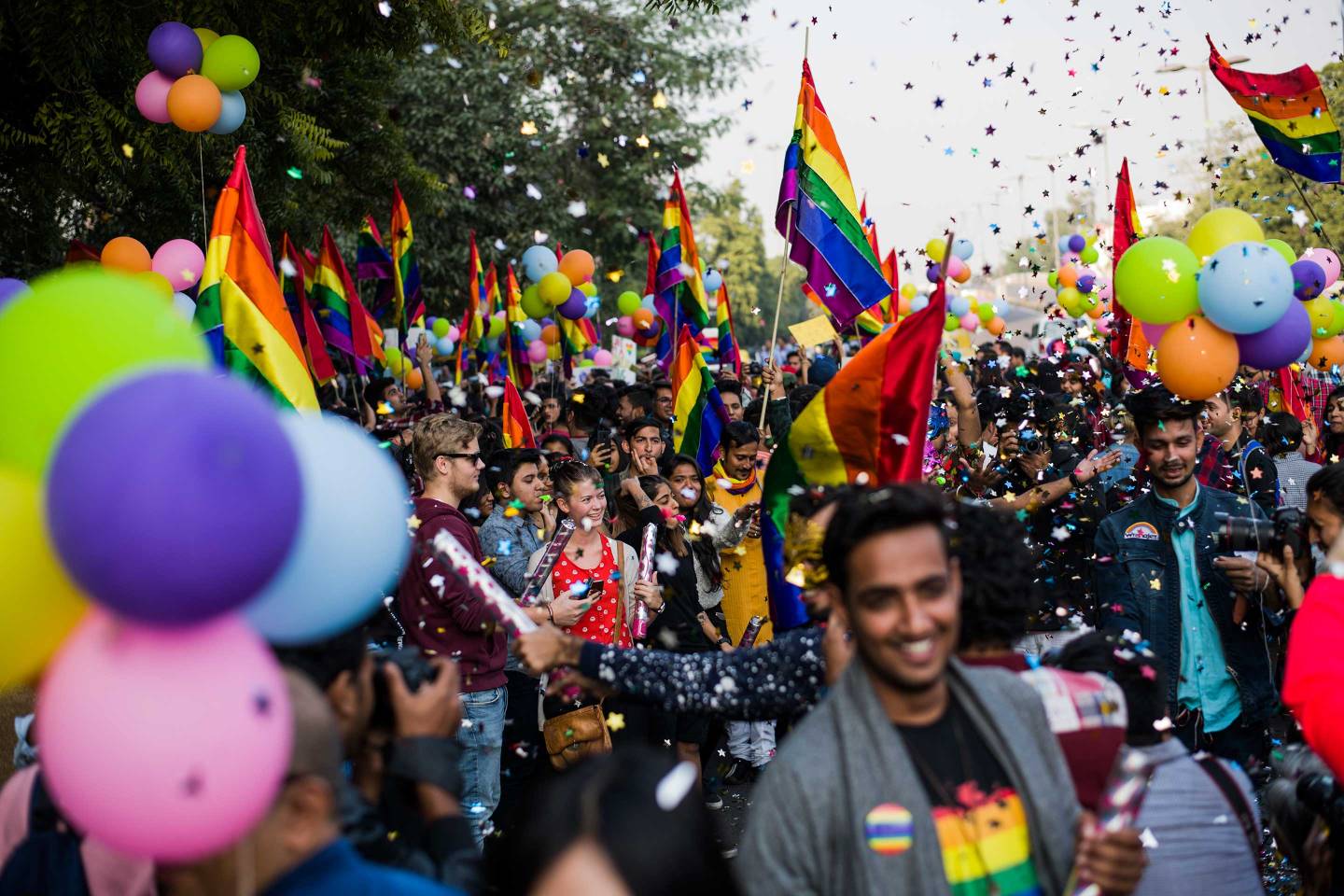 Pride Month has begun, and with it, a series of events, testimonies, and think pieces designed to remind us that while there has been so much progress, the struggle for LGBTQ equality is far from over.

We are welcoming a series of long-overdue firsts in 2019 – the first openly gay album in India, first same-sex marriage law in Asia, the first openly gay state governor in the U.S., moments of courage and hope that serve as optimistic beachheads in a world that continues to devalue the dignity and safety of others. The headwinds have been profound lately, for transgender people in the U.S. military, for LGBTQ students, for same-sex couples who want to buy a wedding cake in some states. One haunting statistic: The rate of violence against transgender women, particularly those of color, continues to rise unabated.

Corporate America has stepped into the conversation in a big way.

Last month, the U.S. House of Representatives passed the Equality Act, legislation designed to protect LGBTQ people from discrimination in employment, education, housing, public accommodations, and other areas, like in retail settings and jury service. The bill passed 236-173.

While it faces an uphill battle in the Senate, it fills in important gaps from previous civil rights legislation. For one thing, it would protect the fifty percent of LGBTQ people who live in the 30 U.S. states that still allow for widespread discrimination based on sexual or gender identities. An earlier version was proposed in 2015, and again in 2017.

According to the Human Rights Campaign (HRC), more than 200 major brands and businesses, with a combined 10.4 million employees and $4.5 trillion in revenue, publicly advocated for the legislation in part by joining the HRC’s Business Coalition for the Equality Act. Click through and see a strong showing from Fortune 500 companies.

By comparison, the only four companies publicly supporting the 2015 version of the legislation were Apple, The Dow Chemical Co. and Levi Strauss & Co.

The corporate shoulder to the wheel is welcome. Obviously, it sends a message. (As does smart LGBTQ-inclusive marketing and advertising.)

But, I believe, one of the unexpected gifts of this kind of advocacy is that it helps people more quickly find the heart of inclusion work: seeing and sharing the fear of others.

When someone casually kneels down to set a rainbow flag alight in front of a gay bar (see below) it’s an annoying act of minor vandalism for some. For others, it’s a death threat. For some, debates about same-sex marriage is a bunch of political noise and a distraction from more important issues. For others, it’s the right to care for dying spouses, be acknowledged as parents, access essential benefits, and be accepted in the world unconditionally.

Understanding this distinction is the crux of the work.

When an individual decides to be an ally, whether they realize it or not, they’re making a choice to be alarmed by and share the weight of the specific fear felt by people unlike themselves. From there, they can act from a place of understanding and support. When a corporation takes a position as an ally, they make it safe for employees, customers, investors, partners, and others who might otherwise be on the sidelines to make the same choice. Yes, it’s good for business. But it’s also just…good.

The bill is far from becoming a law, and there is a legitimate debate to be had about the language it uses, particularly around unintended consequences for faith-based conscientious objectors of all kinds. Professor Douglas Laycock, a law professor at the University of Virginia and a longtime supporter of a federal gay-rights non-discrimination law, has an informative take here.

So, happy Pride Month everyone. If the past is any indication, the debate about the Equality Act will get contentious, and everyone will need to get their empathy on if we’re to settle on a solution that will protect the rights of all involved.

Now, being willing to share the fear of others won’t magically solve the many leadership speed bumps we face on a daily basis—the injustice-collecting manager, the credit-stealing team lead, the perpetually silent diversity hire—will all live to vex you another day. But I’d argue it’s a good start.

Airbnb host: Which monkey is going to stay on the couch? It sounds like the kind of dispute that happens all the time on the home-sharing platform: A disagreement about the number of guests and the status of a pet. Crate? No crate? But when five, young professional black men showed up at what they believed to be a private booking on New York’s Upper East Side, things got ugly quickly. The men began recording and captured the agitated host on video asking “Which monkey is gonna stay on the couch?” It was one of two videos that went viral over the weekend. Airbnb says it has removed the host and helped the men find a new place to stay. “I felt very dehumanized,” said Kenneth Simpson, a 28-year-old health IT professional.
Washington Post

Sephora set to close U.S. stores nationwide for diversity training Although the company says the training had been in the works for months, and a broader campaign called “We Belong to Something Beautiful” had been in development for the better part of a year, an incident involving the R&B singer SZA seems to have prompted immediate action. The singer alleges she was racially profiled at a California store and identified an employee by name on Twitter for calling security to make sure she wasn’t stealing. “We take complaints like this very seriously, profiling on the basis of race is not tolerated at Sephora,” said a spokesperson. All U.S. stores, distribution centers, and corporate offices will be closed for the training on Wednesday. Side(eye) note: Rihanna sent SZA a Fenty makeup gift certificate after the incident.
Reuters

The queen of Creole cooking, NoLa’s darling, has died Leah Chase was the undisputed matriarch of New Orlean’s cuisine, with a career which spanned from the Jim Crow era to the first black U.S. president and beyond. She was 96. Her platform was the kitchen at Dooky Chase’s Restaurant on Orleans Avenue, where she worked most of her life, except for the two years it took to rebuild the restaurant after Hurricane Katrina’s floodwaters destroyed it. She fed civil rights leaders and musicians who were unwelcome in other venues, she fed presidents and world leaders. She was a James Beard Lifetime Achievement Award winner and the inspiration behind Princess Tiana in the Disney animated feature, “The Princess and the Frog.” Every obituary you read—and do read as many as you have time for—will make you both hungry and proud.
NOLA.com

Arsonist burns rainbow flags outside of New York’s only black-owned gay bar The owner of the Alibi Lounge, New York City’s only black-owned gay bar says surveillance footage shows that it was deliberately set. “No one was hurt but emotionally you really start to wonder,” owner Alexi Minko told ABC 7. “Is there a message that somebody’s trying to send to us?” It is not the first rainbow flag to be burned in the days before Pride Month this year; and the incident evoked painful images of the 1973 Upstairs Lounge fire in which an arsonist set fire to the entrance of a gay bar in New Orleans, which turned into a blaze that killed 32 people. Police are considering the recent incident to be a hate crime.
LGBTQ Nation

June 2019 marks the 50th anniversary of the Stonewall Riots It’s an auspicious element of the 2019 Pride Month event. In this in-depth Q&A,  Newsweek asked Michael Bronski, Professor of the Practice in Activism and Media Studies of Women, Gender and Sexuality at Harvard University to explain how the LGBTQ civil rights movement started and why Stonewall matters. The first movements in the 1950s that provided emotional, social and legal support for gay men and lesbians, but by June 1969, things became more militant. It was “a more militant era—in which gay people demanded respect and equality, rather than asking for it, or trying to educate the heterosexual population,” says Bronski. “The movement did not call for 'equality' per se, but rather argued for wide-scale social change that would eliminate many of the factors that caused inequality, such as heterosexism, misogyny, racism, and poverty.”
Newsweek

The “Central Park Five” case changed the law in the U.S. When They See Us, the new Netflix docuseries from Ava DuVernay, explores the racist underpinnings of the criminal justice system that cost five boys their childhood. But because the case became so famous – framed globally as the story of a young white woman jogger attacked by five “wilding” teenaged black and brown boys – it fueled a dangerous shift in juvenile justice. “Ultimately, the hysteria surrounding the Central Park Jogger case gave rise to new language about black-youth crime, and to new laws that caused more children to stand trial as adults than at any other time in American history,” says Elizabeth Hinton. Because of the intimate portrayals, it gets us “closer to understanding why juvenile and adult prison populations exploded through the 1990s, and how the United States became home to the largest incarceration system in the world.”
The Atlantic

What happened to the black and brown students in NYC’s elite public high schools? New York City’s specialized schools have seen a drop in the population of African American and Hispanic students—exacerbating a racial gap that has long existed in these elite public schools. At Stuyvesant High School, for instance, black and Hispanic enrollment was 14 percent in 1976. It dropped to 4 percent by 2017. And while these students represent 70 percent of the entire city’s school system, as The New York Times points out, they “make up just 10 percent of the enrollment in the specialized schools.” A shift in the city’s population has partly changed school demographics—the majority of those enrolled now consist of Asian and Asian American students. But the schools have rigorous entry exams which have spurred the proliferation of costly test prep centers (leaving those unable to pay at a disadvantage). In other cases, black and Hispanic students aren’t counseled that these schools exist, losing out on what former minority students have described “as oases for smart children from troubled neighborhoods.”
New York Times

"An inclusive and respectful culture transcends quiet tolerance. It must be the intentional and unequivocal standard wherever you operate. It must be led by example, with unwavering conviction—from the C-suite to the shop floor—that it is simply the right thing to do, for business and for society. And it must extend beyond the company walls to the communities we call home, leading through advocacy, through partnerships... and at times, leading alone."