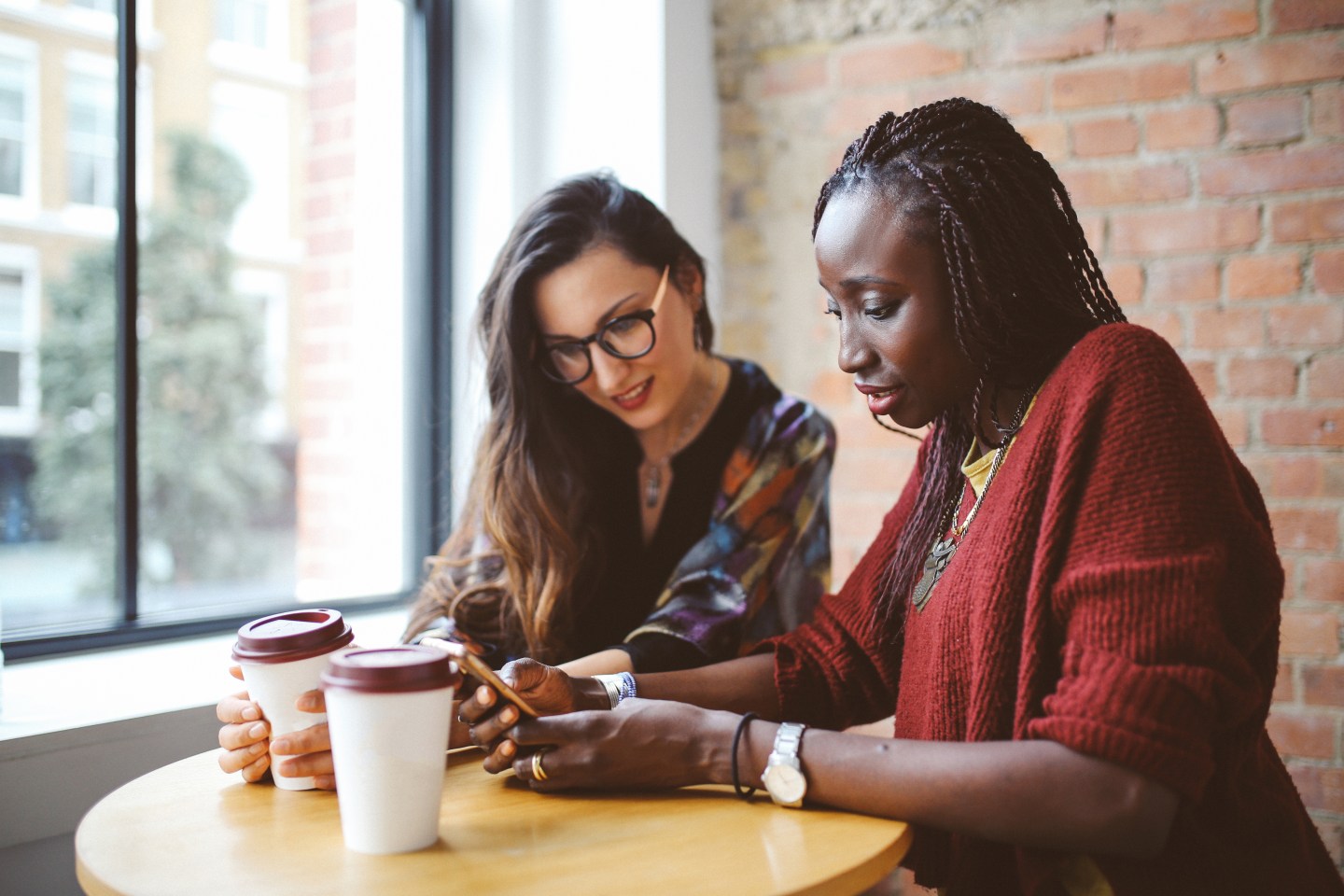 Portrait of a two young women of different ethnicities, working together in a cafe, looking at the laptop.
lechatnoir—Getty Images

Dough is a new, venture-backed, online e-commerce site and subscription service that can help anyone quickly find and buy a wide variety of consumer goods – in every category from health and beauty, to fashion and accessories and beyond, all from women-owned businesses. It launched today.

Dough also has everything you need for a compelling start-up tale: Two dedicated women entrepreneurs on a mission to harness the collective power of shoppers to give women-led brands the revenue they need to grow. “If every woman in the U.S. spent just $20 at a woman-owned business, it would drive more than $2 billion toward female-led companies each month,” says co-founder Anna Palmer.

See? Inspiring. But here’s the twist that got my attention.

Palmer and co-founder Vanessa Bruce, who are both white, have built their company to be inclusive from the start.

What they’ve done is impressive. Currently, 67% of the companies featured in the member starter kit – an assortment of products that are sent to new subscribers in a curated box – are created by women of color, and nearly half of the companies on the entire platform have racially diverse founding teams. They plan on increasing that number going forward.

Diversity starts at Dough HQ: Of the six-woman on the Dough start-up team, three are white and three are women of color. (And, they’re hiring.)

All of this is core to their mission, they say. “We believe in equity for all, and that includes a strong commitment to diversity, especially given the even smaller percentage of venture funding that has historically gone to women of color,” says Palmer.

The idea began to take shape last summer when the two friends were noodling on next steps for them and the world.

Palmer is a partner at X Factor Ventures in Boston, an early stage fund that invests in women and mixed gender-led teams. But she was also an operator herself. She co-founded Fashion Project, a double bottom line, venture-backed shopping site with an equally interesting model: Anyone from average consumers to celebrities could donate designer clothes and allocate the proceeds from sales to charity. And anyone from average consumers and celebrities did – the site grew to 60 employees, including Bruce, and processed more than 350,000 sales before it was acquired by Union & Fifth in 2016. (It closed in 2018.)

“As Vanessa and I were meeting for coffee after coffee, we talked about the frustration around the [gender] funding gap, and how difficult the process is to figure out how many women were behind the brands we loved,” says Palmer. But the two figured, if they could build a platform to match savvy consumers with vetted, women-owned companies, it might eliminate the need for early stage funding altogether.

“What women tend to hear [from investors] is ‘come back when you have traction,’” says Palmer. “But they need the money to, say, pay for Facebook ads to get the traction they’re looking for.”

It’s a trap for all women founders, but particularly for entrepreneurs of color who are less likely to have access to even the most basic “friends and family” financing.

“For us, from day one, we wanted to push ourselves,” says Bruce, who has a background in design. She began last summer by reaching out to Hack Diversity, a Boston-based firm that recruits black and Latinx computer science and engineering students and places them in tech companies across the city. From there, she was coached on hiring and was connected to advocates and organizations across the country. (She also became a mentor.)

The two delved deeply into race- and ethnicity-specific pay gap issues, and connected with creative communities of color on Instagram, looking to better understand the contours of the marketplace they were trying to create.

All of this work is reflected on the site, in the profiles of company founders which are presented without hierarchy, and with well-known brands, like Kara Goldin’s Hint Water, seamlessly presented with with lesser-known but equally interesting ones, like handbag and accessories company Dagne Dover, led by Melissa Shin Mash, Deepa Gandhi, and Jessy Dover.

Members can search by product category or by familiar hashtags that lead them to communities they care about: #ArabGirlMagic, #AsianGirlMagic, #BlackGirlMagic, Body Positive, #IAmAble, #IndigenousGoddess, #LatinaPower, LGBTQIA+, etc.

But Dough’s personal contribution to the hashtag game is #walletpower, the growing dollar figure that symbolizes the economic might transferred to the entrepreneurs on the site via sales. “We believe you can close the funding gap from the bottom up, as opposed to waiting for it to trickle down,” says Palmer.

The company makes money on membership fees, currently, a limited number set at $89, and not from the entrepreneurs. “We felt really strongly that if we wanted to direct money back to women-owned businesses that we shouldn’t be in the middle of that transaction,” says Palmer. And as things progress, they plan to add women-owned services companies into the mix.

They concede they could have launched Dough six months earlier by using their own networks. “But it wouldn’t have represented all different types of women,” says Palmer. The choice was between scaling fast and scaling correctly, so it was an easy call. “This can’t be a check the box thing, it has to be core to who you are.”

I wish them luck. There are many reasons why businesses fail to rise; it’s just so encouraging to think that for the women of Dough, a lack of diversity won’t be one of them.

Pantene’s latest “face” is trans rights campaigner Paris LeesDay 2 of the Fortune Most Powerful Women International Summit in London brought some breaking news. It came from Paris Lees, a British trans rights campaigner and writer, who announced on stage that she’s the new face of P&G’s Pantene hair care. Hair was important to her as she transitioned. “It’s not the only thing, but it’s such a powerful expression of femininity,” said Lees. She was also the first openly trans woman to be featured in British Vogue. At the conference she addressed the flip side of “tokenism.” “If you can use the thing that makes you different to benefit in some way, take it—take that opportunity and redress the balance a little bit.”Fortune

Every woman's success should be an inspiration to another. We're strongest when we cheer each other on.Serena Williams