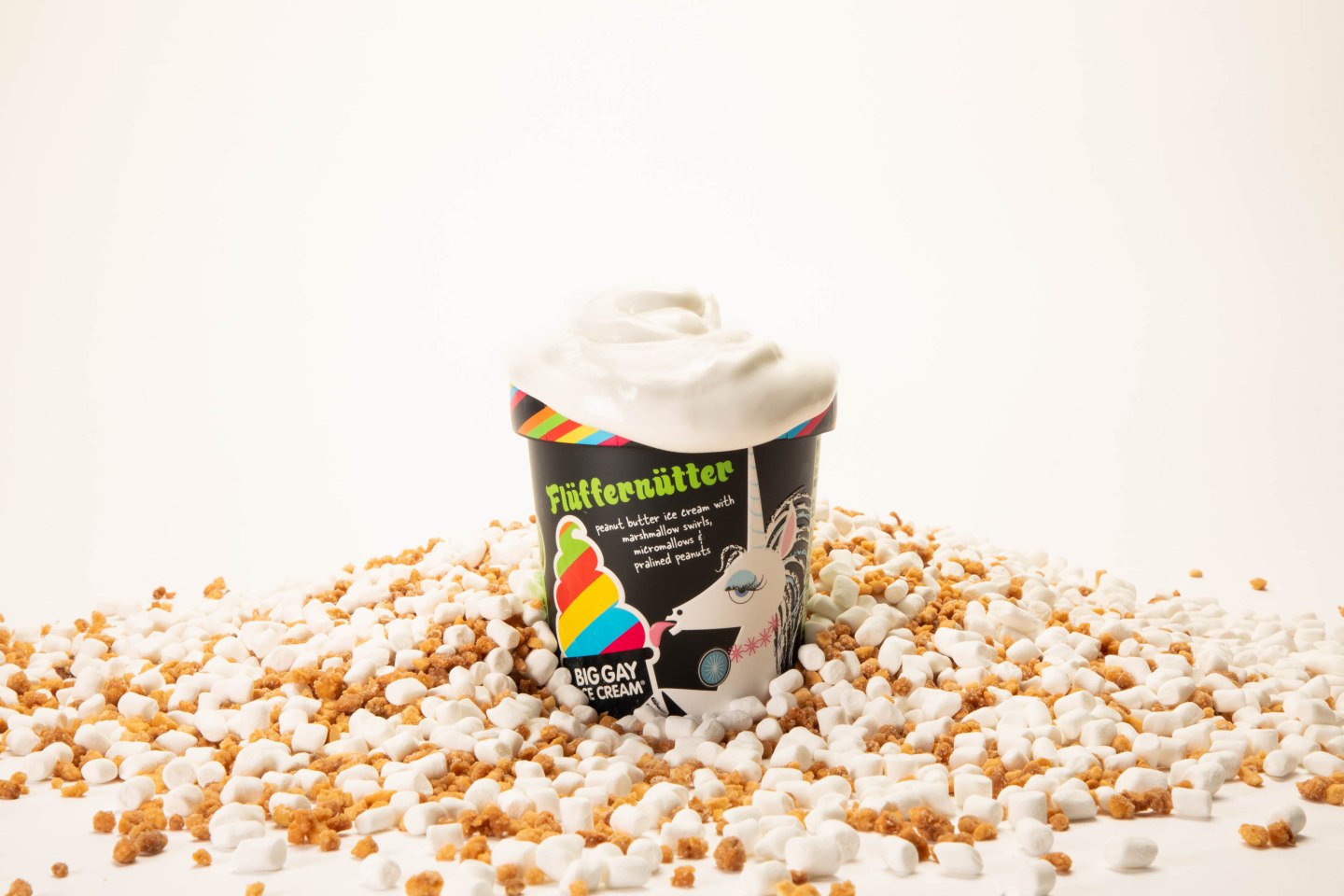 Out of the worst recession the country has seen since the Great Depression, and in the span of a decade, Big Gay Ice Cream has grown from happy-go-lucky and social media wunderkind ice cream truck to Ben & Jerry’s competitor status, now with a full retail line in stores on both coasts.

One of Big Gay Ice Cream’s founders, Doug Quint, spoke with Fortune this month about how the business has grown this brand, starting out as a food truck with locations discoverable via social media to one of the nation’s leading LGBTQ brands. Below is our conversation.

Fortune: It’s your 10th birthday! Congratulations! What inspired you to launch the Big Gay Ice Cream truck when you did?—in the midst of the Great Recession, no less? How much did social media help contribute to the brand’s viral following and success?

Quint: The timing of Big Gay Ice Cream’s birthday and our initial success is a chain of flukes. I decided that once I passed the comprehensive exams for my doctoral degree, I’d take the summer off from studying and performing (I am a classically trained bassoonist) and find a “weird summer job.” The chance to have an ice cream truck at my disposal without any significant expense came along, and I took it. On our end, the recession had nothing to do with it—though it was probably linked to our initial success. We were a $3 treat during a time when people were looking for cheap and quality fun.

In terms of social media, we wouldn’t have our name without Facebook (FB), and we wouldn’t have built our army of supporters without social media. In winter 2009, once we decided that the ice cream truck was really going to happen, I created a Facebook group to document the project. We had no name for the truck yet. I figured that eventually something would come to us, so, as a placeholder, I named the group “Big Gay Ice Cream Truck.” We had no intention of this becoming the name of our business, but people started joining the group. After a few weeks of watching strangers getting interested in whatever the “Big Gay Ice Cream Truck” was, we decided to stop trying to conceive a brand name and go with the one we accidentally created. Oops!

Over the past 10 years, your business has grown from a single food truck, to brick-and-mortar locations, to a national operation. What do you believe is your total addressable market? Where do you want to take this brand ultimately?

What do I believe is our total addressable market? Is it silly to say “everyone”? We’ve never tried to compartmentalize our potential buyers. Gay? Sure. Old? Okay. Straight? Of course. Whatever? Sounds good. As for where we want to take it ultimately, that makes it sound like we have one end goal to achieve, when in fact we have a dozen goals. Increased audience, brick-and-mortar shops in more towns, continued growth of our pints in terms of both market availability and product line. There’s no one place that we hope to wind up, unless you mean in everyone’s freezer.

How are the supermarket pints doing here and out of state? It would seem difficult to match the soft-serve experience in-store with pints at the local CVS.

The pints are doing well—really well. We keep appearing in new places, and watching that play out on social media is great. You got us from a convenience store in a Seattle suburb? Far out!

But you can’t equate getting a soft-serve cone at one of our shops with buying a pint at a drugstore. They’re not the same experience, and one isn’t better than the other. What is important, though, is that both are a Big Gay Ice Cream experience. For the pints in particular, what we have tried to do is re-create the feeling of ice cream hitting your mouth for the first time, having it send the same endorphins and trigger the same sense memory of the fun a kid has when eating ice cream.

In terms of the success of the pints, when we launched our pint line most of the original flavors were reimagined versions of flavor profiles we used at our shops. The cone American Globs, for instance, made the jump to a pint American Globs. We added three new pints this year, and all of them—Banan-o-Graham, Spicy Choco-Lit, and Fluffernutter—are original pint-only creations that we dreamed up. No soft-serve versions. It was a real thrill to develop flavors that were bypassing a shop phase—we love them and are extremely proud of ourselves for developing them. For example, Fluffernutter went from a sandwich we loved as kids and turned into a pint. A much different creative process.

How many customers in a given location does it take to sustain a store? How many people in the Midwest, for example, would buy from a place that sells products called “Salty Pimp”? (As good as that vanilla ice cream cone with salty dark chocolate and swirls of dulce de leche is.) Have you ever run into that kind of branding or identity barrier? Would you ever adjust your brand, dare we say campiness, for a given market or demographic?

I try not to spend too much time worried about the sales projections and growth charts. For me, it takes away from the magic. Since day one our focus has been on creating the best ice cream in the world. We knew if we got that right, the rest would fall into place. Even back in the truck days, we’d watch people walk by and see them read our sign, in some cases, out loud. We’d watch them say “Big Gay Ice Cream?” and sometimes they’d chuckle and walk off but most of the time they were intrigued and would join the line. It’s funny how things work out, because now that is also happening in the ice cream section in stores on both coasts. Our hope is that people see our offbeat branding and give us a try. One spoonful is all it will take to earn a fan for life.

Speaking of branding, Pride—specifically the month of June, which is now celebrated by many as “Pride Month”—has become a brand of its own. And it’s noticeable how many corporate brands have adopted (or even appropriated) Pride for their own marketing ends. Retailers like J.Crew and Listerine are incorporating rainbow colors and words like “love” and “pride,” but nowhere do they mention anything about the LGBTQ community or use terms such as “gay” or “lesbian” or “trans,” etc. How do you feel about other brands that traditionally weren’t synonymous with this community lean into Pride? Is it a sign of progress or just the cogs of capitalism?

We don’t make a point of defining what our “gay” is, or telling people what we want them to think about us. Are we going to tell a major clothing conglomerate that their pride-time apparel is “too gay” or “not gay enough”? Not our style; let the buyers decide. There are plenty of places in the world where wearing a shirt that simply says “pride” will get you more than a sneer. Anyhow, this is a good time for me to say, “I’m just an ice cream man, neither judge nor philosopher.”

Where do you hope or expect to see Big Gay Ice Cream another 10 years from now?

Big Gay Ice Cream has just turned 10. We never thought it would turn ONE. If you asked me then where I thought we’d be now, I would have just laughed at the idea of the business making it to a decade, and look at it—we’ve gone from one truck at a corner in New York City to multiple shop locations and a wide array of pints available on both coasts of the country. We’re an internationally known brand! What will Big Gay Ice Cream be when it turns 20? I don’t even want to imagine. I just want to see us thrive, and I want to continue this crazy rocket ride into the unknown.

—Seattle restaurants are getting smaller, and maybe better, in real estate crunch

—Here’s how to get a degree in gelato