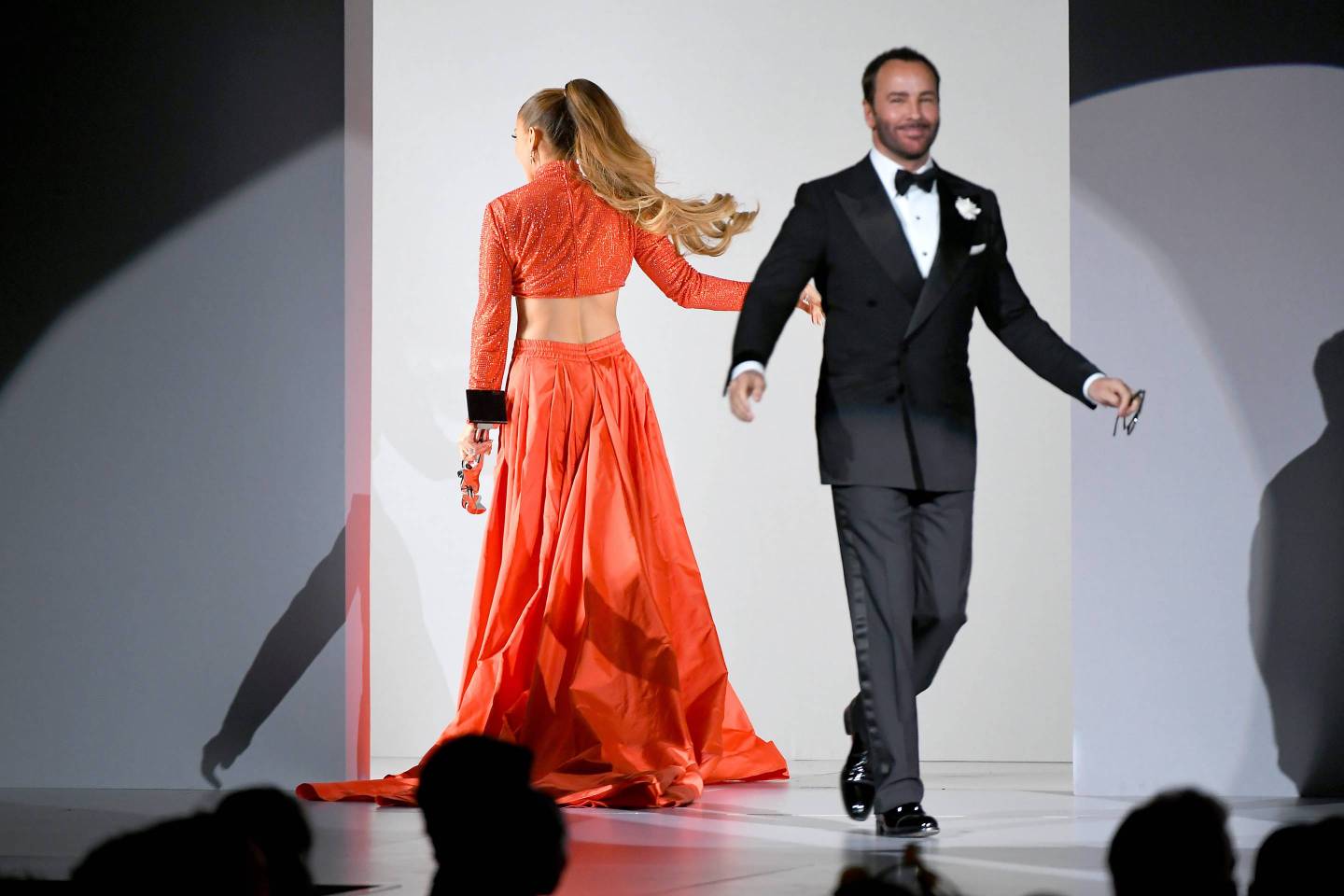 Couturiers and their celebrity muses gathered Monday night at the Brooklyn Museum for the annual Council of Fashion Designers of America awards, the industry’s version of the Oscars, where honorees included actress Jennifer Lopez, designer Bob Mackie, and Barbie.

Lada Gaga’s designer Brandon Maxwell claimed the CFDA Award for Womenswear Designer of the Year. The singer has been Maxwell’s muse for a long time. Recently, he designed her four-dress wardrobe for the Metropolitan Museum of Art gala. In 2010 he created her raw meat dress, well before launching his first line in 2015 and a year later being named the CFDA’s top Emerging Womenswear Designer. More recent clients include Michelle Obama and Meghan Markle.

I had the best time at the Met Gala! Thank you @voguemagazine! 💕 pic.twitter.com/8GEOYRlPIT

Surprised by his win, Maxwell, 34, said he regretted taking “full advantage of the free bar,” before giving an emotional speech about the often unglamorous but always passionate life of a designer.

“I worked for 10 years as a stylist before I started this company and I know that you’re kind people, that you work hard, and we get scrubbed up tonight and put on a suit, but 364 days a year we are trying to pay the light bills and make it happen,” he said.

As a designer who features women of all races and body types in his fashions, and regularly discusses inclusivity as a judge on Bravo’s Project Runway, Maxwell’s win also represents the fashion industry’s admitted need for adaptation. Outgoing CFDA chairperson, designer Diane von Furstenberg, who passed the torch to Tom Ford Monday, said during the ceremony the CFDA was “aware” of its need to be more inclusive when it comes to sizing and casting—which the council earlier this year discussed at greater length in a report outlining its weaknesses.

(This slow evolution of body acceptance is long overdue by high fashion houses and elsewhere in the industry, including at big-box retailers. The so-called “plus-size” market is a $100 billion market in the U.S. and has largely been driven by e-tailers and social media campaigns.)

Ford, a luxury designer of his eponymous brand and former creative director at Gucci and Saint Laurent, hailed Lopez as a pioneer in body positivity, when awarding her the CFDA Fashion Icon award. Escorted by fiancé and retired MLB player Alex Rodriguez, she wore a coral Ralph Lauren skirt and turtleneck embellished with more than 43,000 crystals.

“I started making records in the ’90s, in the era of the waif and the supermodel. But once I was introduced to those people, like in this room, my life changed,” Lopez said in her speech. “Sitting in the design rooms of Oscar de la Renta, Versace, Dolce and Gabbana, Gucci and so many of you guys here tonight, people who designed and allowed me to get into their designs with curves like me…To say I was like a kid in a candy store is an understatement.”

Ralph Lauren's custom look for Jennifer Lopez at the 2019 #CFDAAwards.

Her cropped jersey top is hand-embellished with 43,200 crystals, and her pleated silk skirt is engineered with concealed pockets and a drawcord waistband.#RLRedCarpet @JLo @CFDA pic.twitter.com/U9HZecIF3j

In a somewhat strange move, Mattel’s Barbie doll—which was updated in 2016 to include more skin tones and body types, was also given the CFDA’s Board of Directors’ Tribute Award for its contribution to fashion. (Granted, this diversity wasn’t reflected in the doll’s celebratory Instagram post, which showed Barbie in a custom-designed Diane von Furstenberg gown.)

On my way to the #CFDAAwards! Honored to accept my @CFDA Board of Directors’ Tribute wearing a custom look by @DVF! Not only is @therealdvf the Chairwoman of the @CFDA–her final year–but she is a longtime friend and collaborator! Follow along in Stories for more updates from tonight! 💖 #barbie #barbiestyle

In spite of praise for inclusion, the CFDA Awards was still lacking when it came to the diversity of its winners. The Root notes that no black women received nominations, and nominated designers of color went home empty handed.

Before presenting the Menswear Designer of the Year award to Rick Owens, Patriot Show host Hasan Minhaj touched on fashion’s continued difficulty with inclusion and cultural appropriation, stating, “The entire industry, whose successes [have been linked] to bias, is becoming more inclusive and is pushing boundaries—even if it sometimes puts white dudes in turbans. I’m looking at you, Gucci.”

This was in reference to Gucci’s major misstep in May sending Caucasian models down the catwalk in $750 turbans. Although the fashion house apologized for selling a sweater emulating blackface in February, it has yet to comment on the appropriation of Sikh culture.

Dear @gucci, the Sikh Turban is not a hot new accessory for white models but an article of faith for practising Sikhs. Your models have used Turbans as ‘hats’ whereas practising Sikhs tie them neatly fold-by-fold. Using fake Sikhs/Turbans is worse than selling fake Gucci products pic.twitter.com/sOaKgNmgwR

Other wins included: Emily Adams Bode for Bode as Best Emerging Designer; Bob Mackie’s Lifetime Achievement Award; Eileen Fisher for the Positive Change award; contributing Vogue editor and writer Lynn Yaeger for the Media Award; Sarah Burton, creative director at Alexander McQueen for the Valentino Garavani and Giancarlo Giammetti International Award; Carine Roitfeld for the Founder’s Award; and Mary Kate and Ashley Olsen for The Row won the award for the Accessories Designer of the Year for the third time. The twins have also won Womenswear Designers of the Year twice.

While aspects of the CFDA Awards seemed familiar, there are changes afoot. As Ford starts his reign as CFDA chairman, we’ll see how forward motion is reflected in the council’s upcoming Fall Fashion Week.

Here are other looks from the night:

Thank you for having me @VeraWang and dressing me in one of my favorite looks. #cfda pic.twitter.com/dALy1HX2Ad

She showed up to the Funeral to COLLECT THE CHECK! @ashleygraham shut this carpet down in Siriano at the @CFDA awards pic.twitter.com/zztpTwGPWN

—These are the best and worst airlines, according to J.D. Power