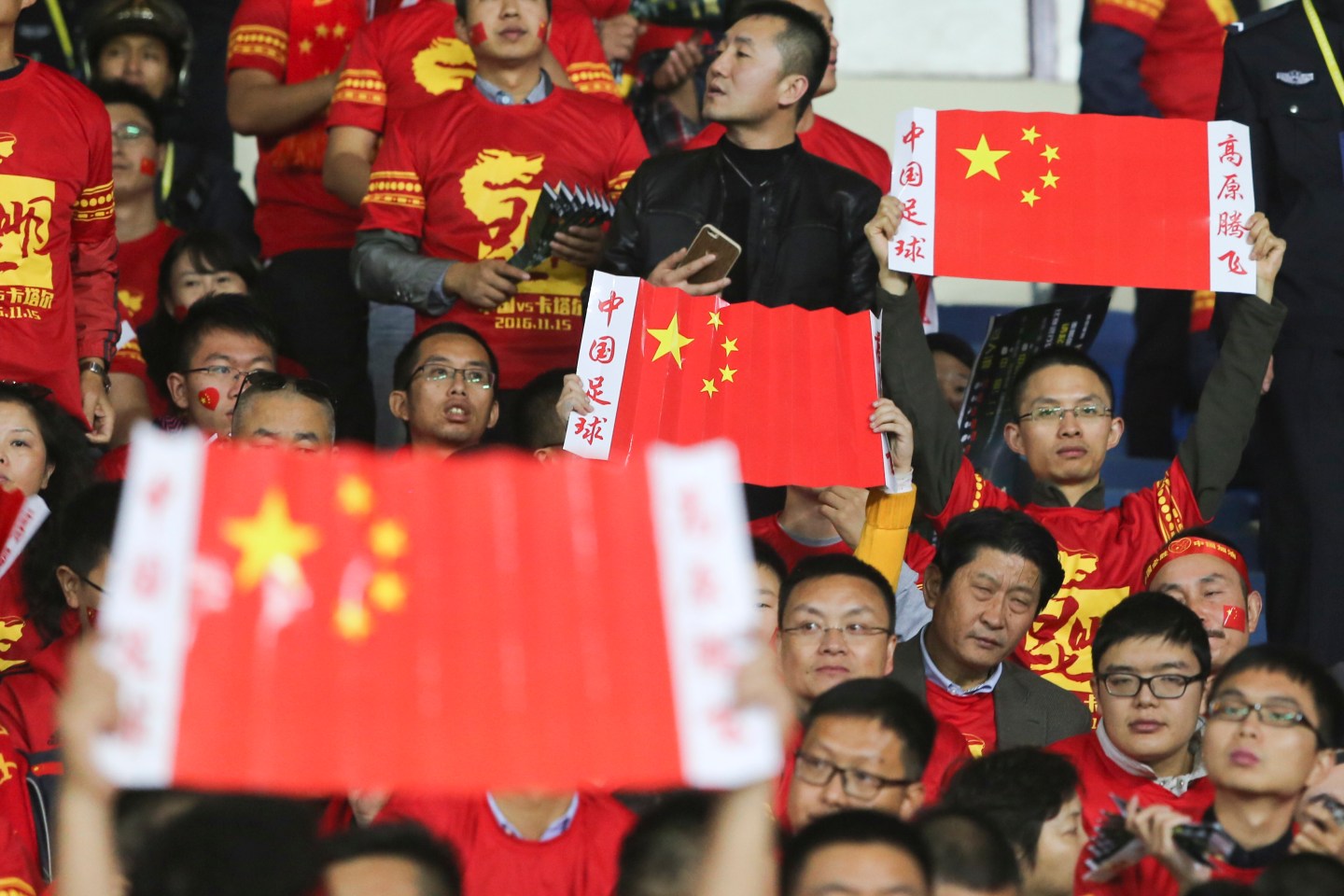 Fans hold Chinese national flags before the 2018 FIFA World Cup Qualifier match between China and Qatar at Tuodong Stadium on Nov. 15, 2016 in Kunming, China.
Photograph by VCG via Getty Images

China has a big appetite for all things soccer. It even wants to become a “soccer superpower” by 2050.

The country is still nowhere near the top of FIFA’s global rankings, but that hasn’t stopped Chinese investors from going on a major shopping spree for anything soccer-related in the past few years. Their latest target? Broadcasting rights of the world’s richest league, reportedly.

Citing anonymous sources, Bloomberg reports that the English Premier League (EPL) has inked a three-year broadcasting deal worth over $650 million with Chinese digital broadcaster PPTV, beginning from the 2019/2020 season. PPTV is part of the Suning group, the same Chinese retail conglomerate that had acquired a majority stake in the Italian soccer club Inter Milan earlier this year.

The deal — likely to be the EPL’s most expensive overseas broadcasting agreement ever, according to Bloomberg — marks a major leap by Chinese companies in acquiring overseas sports broadcasting rights. The EPL’s current TV deal in China cost just one-twelfth of what PPTV is now paying, says Bloomberg. (The Hong Kong division of another Chinese online video service provider, LeEco, sealed the most recent EPL broadcasting contract covering the semi-autonomous territory by paying an already-staggering price of $400 million back in 2015, according to The Hollywood Reporter.)

Even before this jaw-dropping deal, Chinese investors had already shown considerable interest in more than the rights to air English soccer matches in the country.

In the summer of 2016 alone, two English soccer teams — Aston Villa and the West Bromwich Albion — were bought outright by relatively obscure Chinese companies. A third, the erstwhile powerhouse Liverpool FC, had been at the center of a bidding war between different Chinese investors for a minority stake — as Reuters reported in August — even as its U.S. owners had suggested that the club was not for sale. Other clubs like the Wolverhampton Wanderers and Manchester City had also received some form of Chinese funding.

Chinese money doesn’t just have its eyes on the English league, as the Inter Milan acquisition had shown. AC Milan, the other major Milan-based soccer club, was reportedly bought from former Italian premier Silvio Berlusconi’s company — albeit with problematic bank papers. And according to Reuters, Dalian Wanda, the firm better known for its involvement in Hollywood, now holds a 20% stakes in the Spanish club Ateletico Madrid, and has become a major sponsor of FIFA, the governing body of world soccer.

However, even as China’s footprint in world soccer deepens, the money-first, investors-first approach to soccer in the world’s second-largest economy has reportedly left some fans of the “beautiful game” feeling disgruntled.