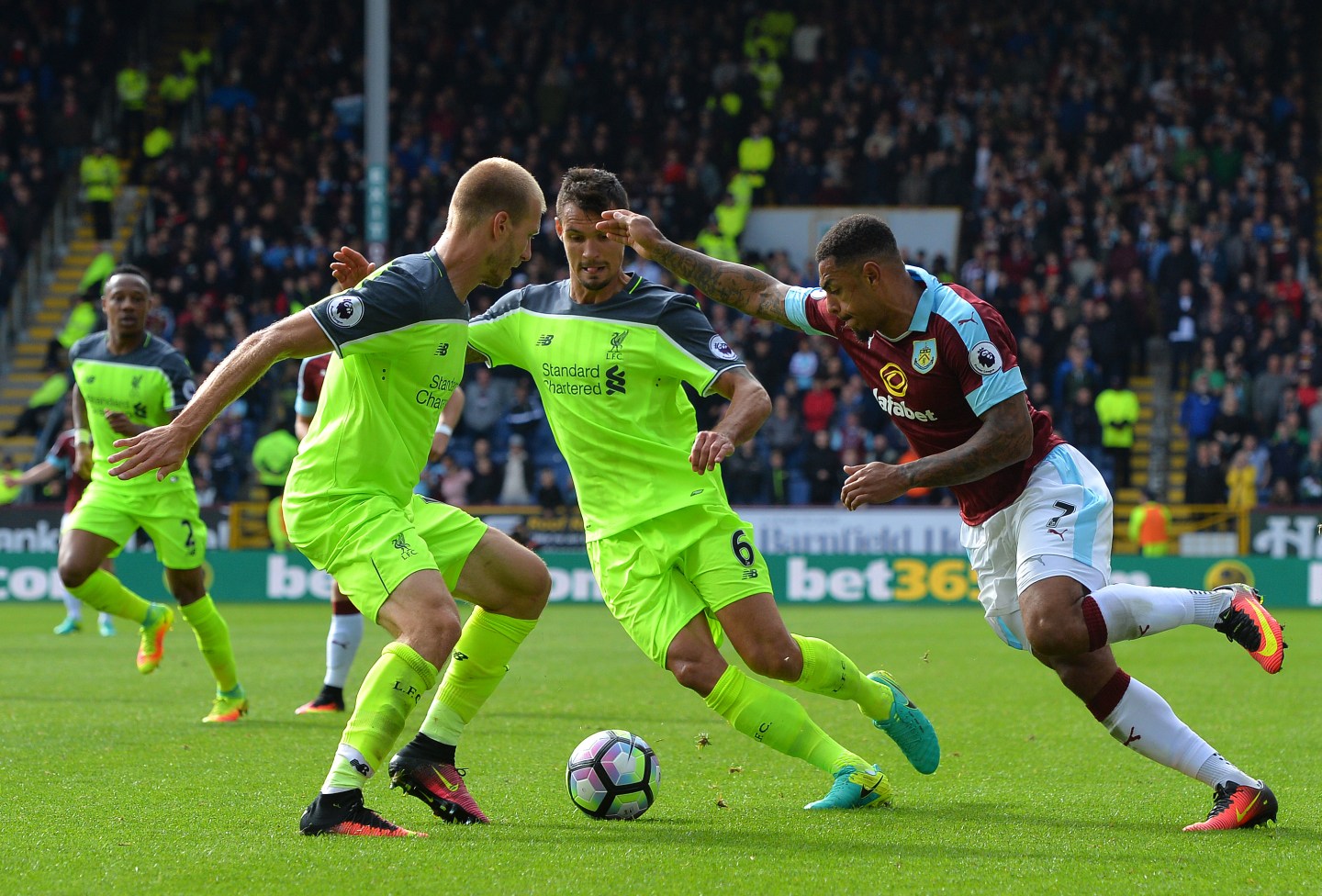 Andre Gray of Burnley takes on Dejan Lovren and Ragnar Klavan of Liverpool during the Premier League match between Burnley FC and Liverpool FC at Turf Moor on August 20, 2016 in Burnley, England.
Photograph by Mark Runnacles — Getty Images

A consortium led by state-owned financial conglomerate Everbright is not the only Chinese group to have looked at investing in English soccer giant Liverpool, with the club attracting interest from Fosun, property-to-film group Dalian Wanda and others, a person familiar with the matter said.

Though none have put together a formal bid, according to the person, interest expressed over recent months in one of England’s most storied clubs reflects a significant step-up in China’s drive to become a soccer powerhouse.

A senior Liverpool source on Sunday denied the club’s American owners were planning to sell, but indicated they could be open to offers for a minority stake.

Since the start of last year, Chinese buyers have spent some $4 billion on soccer assets large and small, from Italy’s Inter Milan to French second-tier side Auxerre. The soccer land grab has accelerated this year with around $3 billion worth of deals announced since December, when a state-backed group spent $400 million for a minority stake in the firm that owns Manchester City.

In recent months, though, small, lesser known Chinese buyers have dominated, as in the case of AC Milan, sold by former prime minister Silvio Berlusconi’s Fininvest to a group of virtually unknown Chinese investors.

Liverpool’s list of admirers suggests large, high-profile Chinese groups could still be in the wings with the potential for deals to dramatically alter the dynamics of European football. Already, teams in China are offering some of the highest salaries in the game.

“Many Chinese are interested,” said the person, who declined to be named as the discussions are not public. “No-one has bid, (but) letters of interest? There are many.”

He added Liverpool’s Boston-based owners, Fenway Sports Group, want a valuation of 780 million pounds ($1.02 billion) and had been looking for a while to sell a minority stake.

Liverpool declined to comment. The club reaffirmed over the weekend that it is not for sale.

As well as Manchester City and Wolverhampton Wanderers, Chinese investors already have stakes — or have announced deals in — English clubs Aston Villa and West Bromwich Albion. Sources say Hull City, recently promoted to the English Premier League (EPL), and others are also in talks with Chinese investors, lured by a lucrative TV rights deal.

Chinese firms like Fosun and Wanda have led the charge, but others have followed. Retail giant Suning Commerce Group Co Ltd bought Inter Milan in June and aims to create a global sports empire.

Liverpool, one of England’s most successful clubs, is among the most valuable in the EPL in commercial terms. It generated almost 300 million pounds ($390 million) of revenue in the year to end-May, 2015, most of that from broadcasting rights. However, it hasn’t won the English league since 1990.

“There are a large number of brokers seeking to find available clubs for prospective buyers, and we are contacted almost daily by intermediaries looking to find a deal for Chinese investors,” said Liz Ellen, London-based partner and head of sports practice at law firm Mishcon de Reya.

“The reality is that most clubs are for sale if anyone wants to meet the asking price.”

China’s drive comes with the public backing of President Xi Jinping, who portrays himself as an avid fan and says he wants China to one day host — and win — the football World Cup. China currently ranks 78th in the world, below Uzbekistan and Benin.

While many clubs and fans are keen to bring in Chinese investors for an injection of cash, question marks remain over the sustainability of the investment boom. The fast growth of the market also means there are still some rough edges.

A person at the EPL, who asked not to be named, said there wasn’t a particular concern about Chinese investment, but any investor taking a 30 percent stake would trigger rules to check on the sustainability of the investment.

Both the EPL and the Football Association declined to comment.

The Everbright consortium also includes PCP Capital Partners, run by financier Amanda Staveley, a British businesswoman who was involved in the high-profile takeover of Manchester City by Arab billionaire Sheikh Mansour in 2008. In the same year, she was also involved in the negotiations when Dubai International Capital sought, unsuccessfully, to buy a stake in Liverpool.

Ellen at Mishcon de Reya said there was unlikely to be much resistance by governing bodies to new Chinese owners given that foreign investment was already the norm.

“Previously, (the league) was dominated by the Americans, but we will now see Far Eastern owners take the lead,” she said.