In China’s Quest to Conquer World Soccer, Fans Are Feeling Left Behind 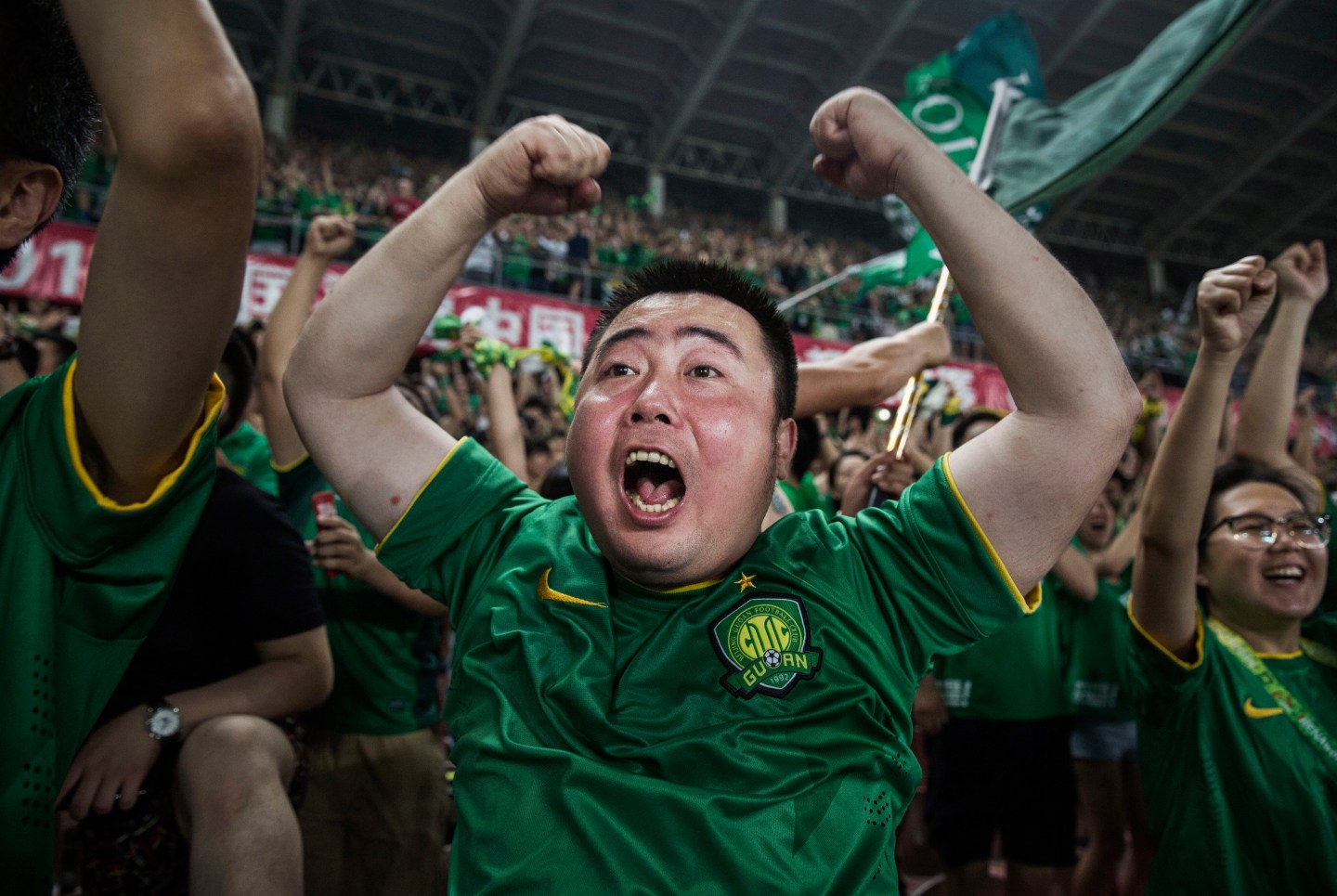 CHINA OUT BEIJING, CHINA - JUNE 28: Ultra supporters and fans of the Beijing Guoan FC celebrate together after a goal against Chongcing Lifan FC during their Chinese Super League match on June 28, 2015 in Beijing, China. There are growing legions of ardent supporters and fans of China's football clubs. The government is also trying to foster a football culture in the country by mandating football programs in 20,000 Chinese schools in a recent plan devised by President Xi Jinping to make China a football power.. (Photo by Kevin Frayer/Getty Images)
Kevin Frayer/ Getty Images

Big money signings and investments in storied European clubs, and the backing of a president who is an avid soccer fan: things should be looking up for millions of Chinese supporting the “beautiful game.”

Not so, say some long-time football enthusiasts like Bian Minming, who fear the game is being taken away from them.

Chinese soccer’s new-found cash also means a deluge of heavy-handed corporate sponsorships, and Bian and others say that hampers Beijing’s aim of nurturing a grassroots base for the sport and homegrown talent.

All footballing nations have struggled to balance the interests of commercial sponsors with those of hardcore fans, but in China, encouraged by President Xi Jinping to become a soccer superpower, investors hold all the cards.

All 16 clubs in China’s top league have been forced to incorporate the names of new owners or sponsors in their team names — constant changes that irritate fans. Others clubs been forced to move home, sometimes more than once.

“The football association needs to learn,” said Bian, who protested moves to rebrand Shanghai Shenhua, the club he follows. “The league shouldn’t allow clubs to keep changing names, because only then will they be able to attract more fans.”

The Chinese football association did not respond to a request for comment.

China is currently hosting some of Europe’s biggest clubs, who flock to China to tap a millions-strong pool of fans and some deep-pocketed investors.

Manchester United had been due to take on Manchester City, now part-Chinese owned, in a pre-season match later on Monday at Beijing’s Bird’s Nest Stadium — their first derby outside England — though the game has been canceled due to weather concerns and the state of the pitch.

The build-up to that match, in the middle of a busy Chinese league season, had overshadowed even last week’s clash between Shanghai Shenhua and city rivals Shanghai SIPG.

Buying foreign talent may increase interest — China spent more in the winter transfer window than the entire English Premier League — but as with the Gulf States, sports industry veterans warn it will do little to boost the homegrown talent that China needs if it is to achieve Xi’s ambition of one day winning the World Cup.

China currently ranks 81st in the world, behind St Kitts and Nevis, whose population of 55,000 would fit into Shanghai SIPG’s stadium.

“China’s top-down approach to everything does not fit football at all,” said Cameron Wilson, who runs Wild East Football, a news website devoted to Chinese soccer.

“You need a solid and long-standing football culture to generate a supply of people who have grown up watching, playing and most importantly, loving football.”

Last year, China drew up a far-reaching reform plan aimed at reinvigorating the domestic game, which it said was “lagging in all respects.”

High on its agenda was creating “hundred-year clubs” rooted in local communities and nurturing a genuine grass-roots sporting culture. To achieve this, it said it would curtail the power of rich investors to relocate or rebrand teams on a whim.

But for now, money speaks loudest.

Even as it called for a bottom-up sporting culture, China also demanded the establishment of “competitive brands” and set a target of swelling the sports industry to 3 trillion yuan ($450 billion) — six times the estimated value of the existing global sports market — by 2020.

Of course, without sponsorship, China’s clubs would have no chance of importing international stars such as former Arsenal and Roma striker Gervinho or Senegal’s Demba Ba. Such banner signings have fueled lucrative TV deals — but not yet homegrown success.

“There are differences in culture, in the national personality and tradition,” said Waley Ho, founder of Reds in Shanghai, a Manchester United supporters group. “It will still need time.”

Fans say the removal of sponsors’ names from club crests would go a long way.

Shanghai SIPG, formed in 2005 and explicitly modeled on Manchester United — founded in 1878 — has already undergone two relocations and two name changes. It is now named after the Shanghai International Port Group, a state backer with the resources to pay a Chinese record of more than 50 million euros ($55.15 million) to sign Brazilian international Hulk from Zenit St Petersburg.

Bian and other Shanghai Shenhua fans protested in 2014 after their new owners, the Greenland Group, announced plans to change the club’s name and put the group’s logo on the club crest. The club did not respond to requests for comment.

Despite a compromise, which saw the club rebranded as Shanghai Greenland Shenhua, fans speaking after last Sunday’s derby against Shanghai SIPG said they still hope the owners’ name can be removed — even if they can see an upside.

“Without them, we wouldn’t have Demba Ba,” shrugged Bian.