Trump Visits Baton Rouge, Despite Governor’s Request Not To 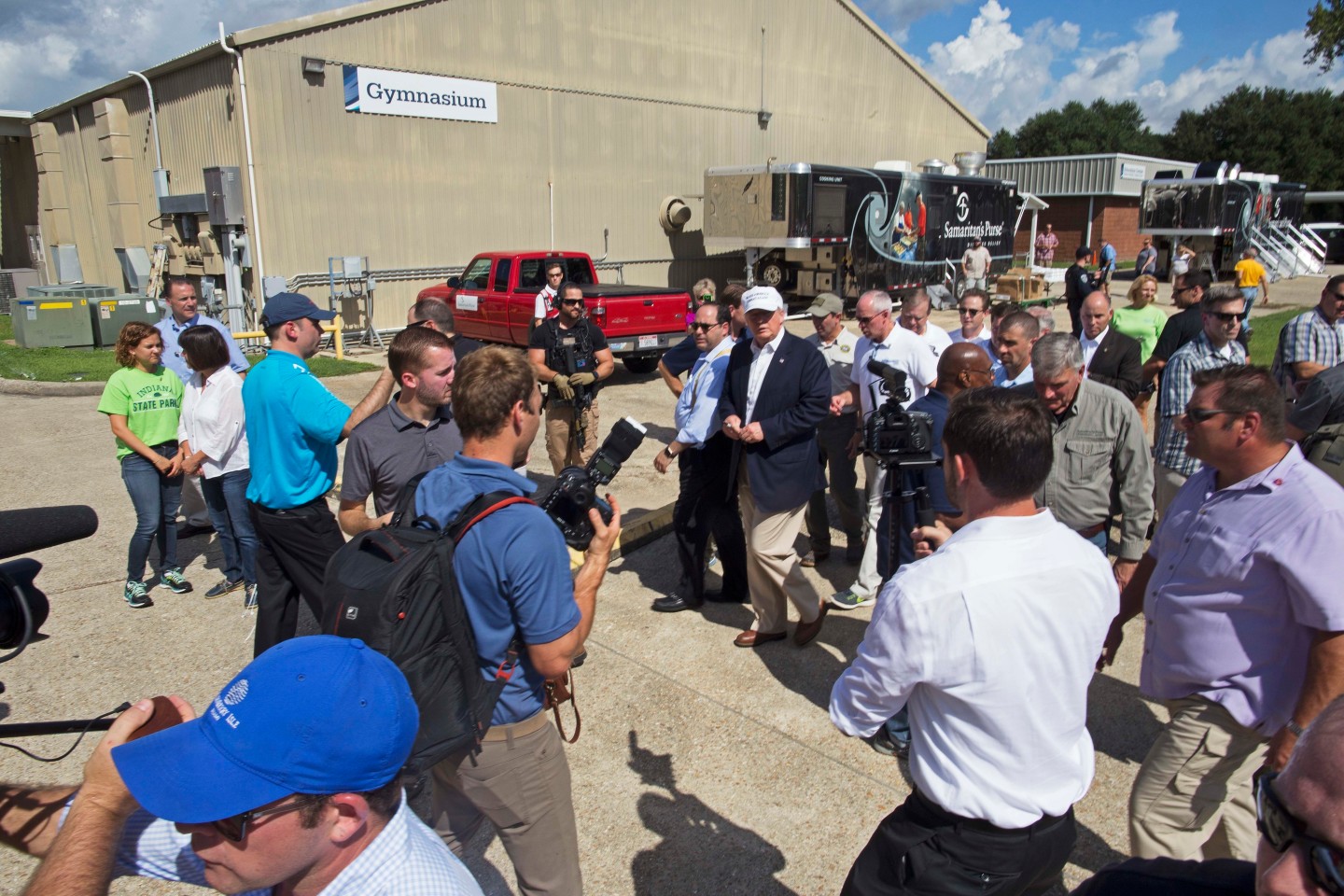 Republican presidential candidate Donald Trump tours the grounds of the Greenwell Springs Baptist Church in Greenwell Springs, La., Friday, Aug. 19, 2016, where they are distributing food and supplies to victims of the flood. (AP Photo/Max Becherer)
Photography by Max Becherer AP

Trump’s motorcade drove past piles of possessions and building materials that had been ripped out of flooded homes en route to Greenwell Springs Baptist Church in a flood-ravaged portion of East Baton Rouge Parish.

Louisiana Governor John Bel Edwards’ office had said Trump had not called to discuss plans for his visit, but said the New York businessman was welcome to volunteer or make a sizable donation toward helping victims.

“We welcome him to (Louisiana), but not for a photo op,” the governor’s office said in a statement. “Instead we hope he’ll consider volunteering or making a sizable donation to the LA Flood Relief Fund to help the victims of this storm.”

2 Dead and More Than 1,000 Rescued as ‘Unprecedented’ Floods Hit Louisiana

Yet Kellie Michelli, who lost her home in the flood and was also at the church to pick up food with her family, beamed as she showed off an autograph on a Trump hat from an earlier rally in Baton Rouge.

“He took time out of his busy schedule to come here,” Michelli said. “I don’t care if he gives a nickel, he showed he cared by coming here.”

Some 40,000 homes were damaged and at least 13 people died in Louisiana after a deluge of more than 2-1/2 feet in what has been described as the worst U.S. storm since Superstorm Sandy in 2012.

Trump’s vice presidential running mate, Indiana Governor Mike Pence, joined him in Baton Rouge, the capital city of a state that is typically a Republican stronghold in presidential elections.

Trump’s campaign team was changed again on Friday when Paul Manafort resigned as chairman days after the candidate effectively demoted him in a leadership shake-up.

Hillary Clinton, Trump’s Democratic rival, said on social media that she had spoken with the governor by phone on Friday, and the flooding was worse than expected.

“My heart breaks for Louisiana, and right now, the relief effort can’t afford any distractions,” she said on Facebook, directing people to support organizations providing assistance.

Some people in Louisiana have urged President Barack Obama to cut short a vacation on Martha’s Vineyard in New England to visit and view the flood devastation. Obama’s vacation is due to end on Sunday.

Edwards said he urged the president to wait a few weeks before visiting as the huge presidential security undertaking involved would interfere with recovery efforts.

“We still have response operations going on,” Fugate told CNN. “To move the president into a disaster area actually takes away some time from the response and the focus on” saving people.

Fugate has said he talked with Obama this week about the response. The president has also declared it a federal disaster, freeing up emergency resources.

In 2005, then-President George W. Bush, a Republican, drew criticism for flying over extensively damaged New Orleans, Louisiana, and then giving a speech in the still-flooded city following Hurricane Katrina.

10 years after Katrina, the New Orleans economy is finally coming back

5 lessons all cities can learn from Hurricane Katrina

Although waters have receded in many deluged parts, some areas around Lafayette, in the southwestern part of the state, are now experiencing major flooding as the water moves, according to the National Weather Service.

Some 86,500 people have already filed for federal aid following the historic levels of rainfall.

Thousands of people must now contend with flood-hit homes and about 4,000 people were in shelters, according to state officials. The Red Cross has said recovery efforts will cost at least $30 million.