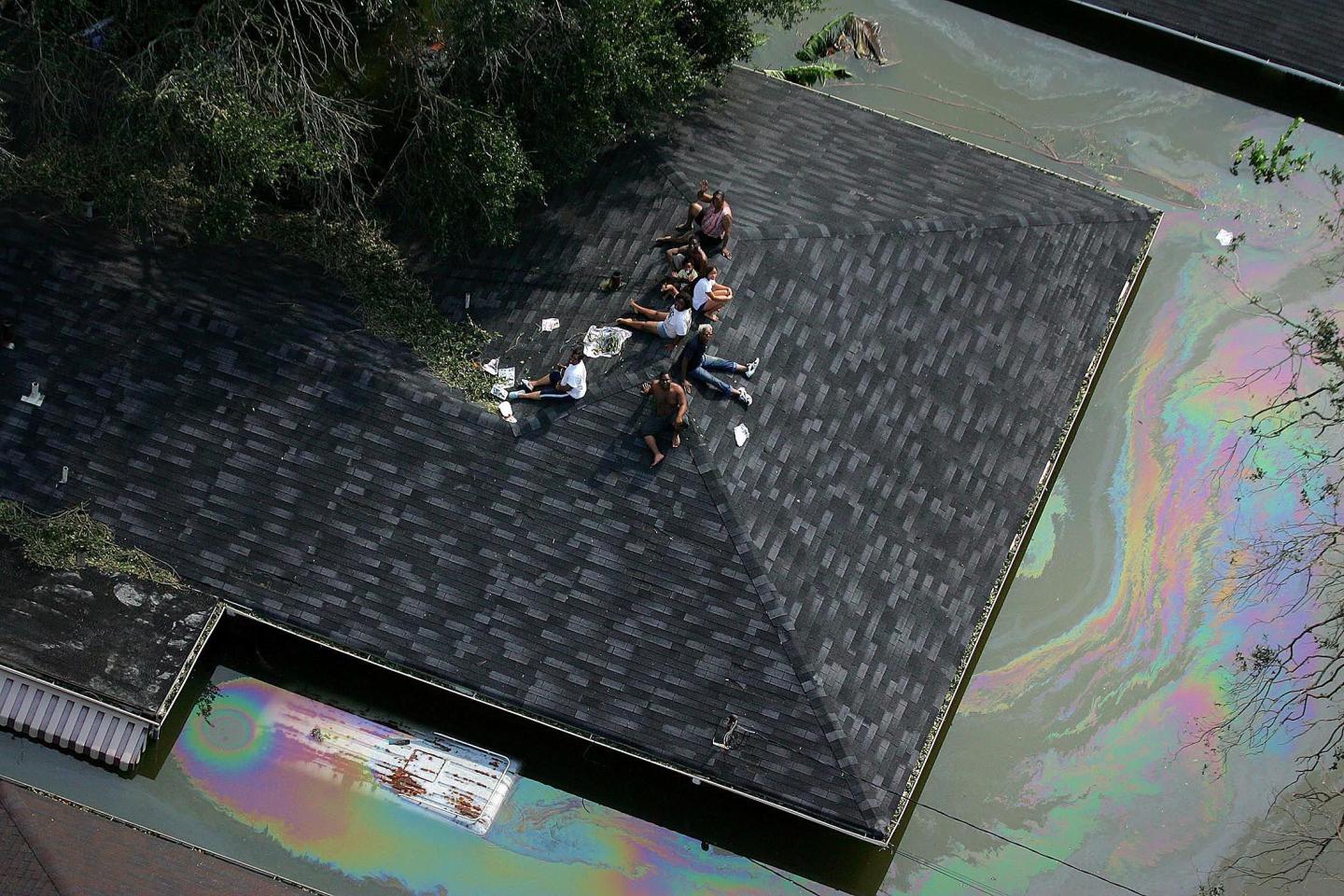 Aerial photograph of the devastation caused by the high winds and heavy flooding in the greater New Orleans area following Hurricane Katrina, August 30, 2005. Floodwaters engulfed much of New Orleans on Tuesday as officials feared a steep death toll and planned to evacuate thousands remaining in shelters after the historic city's defenses were breached by Hurricane Katrina. REUTERS/Vincent Laforet/Pool TBA/PN - RTRLZ95
Photograph by Reuters

A decade has passed since Hurricane Katrina made landfall. For the people who lived it, the horror is surely still fresh, and for those of us who turned on the news from the safety of our homes to see an entire American city submerged, it still seems surreal.

The celebrity class found its way into the headlines. Actor Sean Penn paddled a boat through flooded streets to rescue survivors, and an obscure rapper named Kanye West appeared as a featured speaker on NBC’s “A Concert for Hurricane Relief,” saying, “George Bush doesn’t care about black people.” The rest is history.

The crisis also put a few people into the spotlight for the first time. Some who were already somewhat known became household names, while others became famous and were then forgotten almost as quickly.

Fortune presents a list of five people who became synonymous with the coverage of Hurricane Katrina, and looks at where they are a decade later.

Michael Brown was director of the Federal Emergency Management Agency (FEMA) when Hurricane Katrina struck the Gulf of Mexico. He became a lightning rod for criticism when his boss, former President George W. Bush, said to him, “Brownie, you’re doing a heck of a job.” That phrase immediately and permanently entered the popular lexicon as something one says in the aftermath of catastrophe, perhaps second only to, “Besides that, Mrs. Lincoln, how did you enjoy the play?”

Brown’s qualifications were immediately scrutinized. Prior to his stint at FEMA, he had worked for nine years as commissioner of the International Arabian Horse Association, not exactly the first organization one thinks of when the words “crisis management” come to mind. He also did himself no favors during an interview with CNN’s Paula Zahn, in which he said that the agency had just learned of the thousands of evacuees stranded in the New Orleans’ Morial Convention Center without food, water or electricity, despite the fact that it had been continuously reported on the news for an entire day.

Brown resigned 10 days afterwards and went on to work for such security and disaster recovery companies as Next of Kin Registry, a non-governmental organization for which he was chief executive officer. In 2011, he also wrote a book in which he derided President Bush as “a fratboy” who “didn’t get” the magnitude of the crisis. Today, he is the host of The Michael Brown Show, a talk radio program broadcast daily on Denver, Colorado’s KHOW.

CNN’s Anderson Cooper was a known commodity before Hurricane Katrina, but his breakthrough came during an interview with former Louisiana Senator Mary Landrieu, whose polite blather he interrupted to tell of the horrors unfolding before him. “For the last four days, I’ve been seeing dead bodies in the streets here,” he told her. “Literally there was a body on the streets of this town yesterday being eaten by rats because this woman had been laying in the street for 48 hours.”

The moment brought him national attention, and he ran with it. He became a correspondent for “60 Minutes” in 2007, while still holding down a job at CNN, and in 2012 he came out on the blog “The Daily Dish,” saying, “The fact is, I’m gay, always have been, always will be, and I couldn’t be any more happy, comfortable with myself, and proud.” He remains the host of “Anderson Cooper 360°,” which airs every weeknight on CNN, the station he’s called home for years.

If Hurricane Katrina produced a homegrown celebrity, it would have to be retired Lieutenant General Russel L. Honoré. He coordinated the military relief efforts for the affected areas of the Gulf Coast, but he attained celebrity of a Michael Hung duration for the amusing crabbiness that he deployed on the job. It led The Washington Post to dub him “The Category 5 General.”

Former Mayor Ray Nagin referred to him as a “John Wayne dude… he started cussing and people started moving.” But most memorably, he publicly shamed a group of armed and potentially trigger-happy people, which helped de-escalate a very tense situation. He retired from the military in 2008, and according to his official website, he’s a Senior Scientist with The Gallup Organization and a contributor to CNN.

Ray Nagin was mayor of New Orleans when Hurricane Katrina made landfall. The first time many people heard his name was during its aftermath, when he was interviewed on local radio. “I need reinforcements, I need troops, man, I need 500 buses, man,” he told correspondent Garland Robinette. “Get every doggone Greyhound bus line in the country and get their asses moving to New Orleans.”

Nagin was re-elected in 2006, but any good will that he had gained during the crisis wore off quickly, particularly in 2007, when the city’s crime rate increased and he said that while it was unfortunate, crime “keeps the New Orleans brand out there.” He left office in 2010 with a greatly diminished reputation, and was indicted on 21 corruption charges in 2013, of which he was found guilty of 20. He was sentenced to 10 years in prison in 2014.

Before Brian Williams became a case study in “Oh, the humanity,” he was a newscaster who had just joined NBC Nightly News in December 2004. Less than a year later, greatness called, and he was tasked with covering the aftermath of Hurricane Katrina from the streets of New Orleans. His efforts and those of his team won NBC News a Peabody Award, and he quickly became a welcome, trusted fixture in American homes as host of the NBC Nightly News. In 2014, his contract was renewed for more than $10 million a year, according to The Los Angeles Times.

It all fell apart in February 2015. According to NBC News President Deborah Turness, “Brian misrepresented events which occurred while he was covering the Iraq War in 2003.” That incident cast suspicion on other instances of colorful journalism, including his contention that he had seen a dead body float by his French Quarter hotel room while he covered Hurricane Katrina, despite the fact that the neighborhood had escaped serious flooding due to its relatively high elevation in the city. Other claims that he had made, such as that his hotel had been “overrun” by gangs and that he had contracted dysentery, also began to sound fishy.

He was suspended without pay and replaced in June 2015 by Lester Holt, and was allowed to join MSNBC as a breaking news anchor. “I’m sorry,” he said, addressing the controversy. “I let down my NBC colleagues and our viewers, and I’m determined to earn back their trust.”