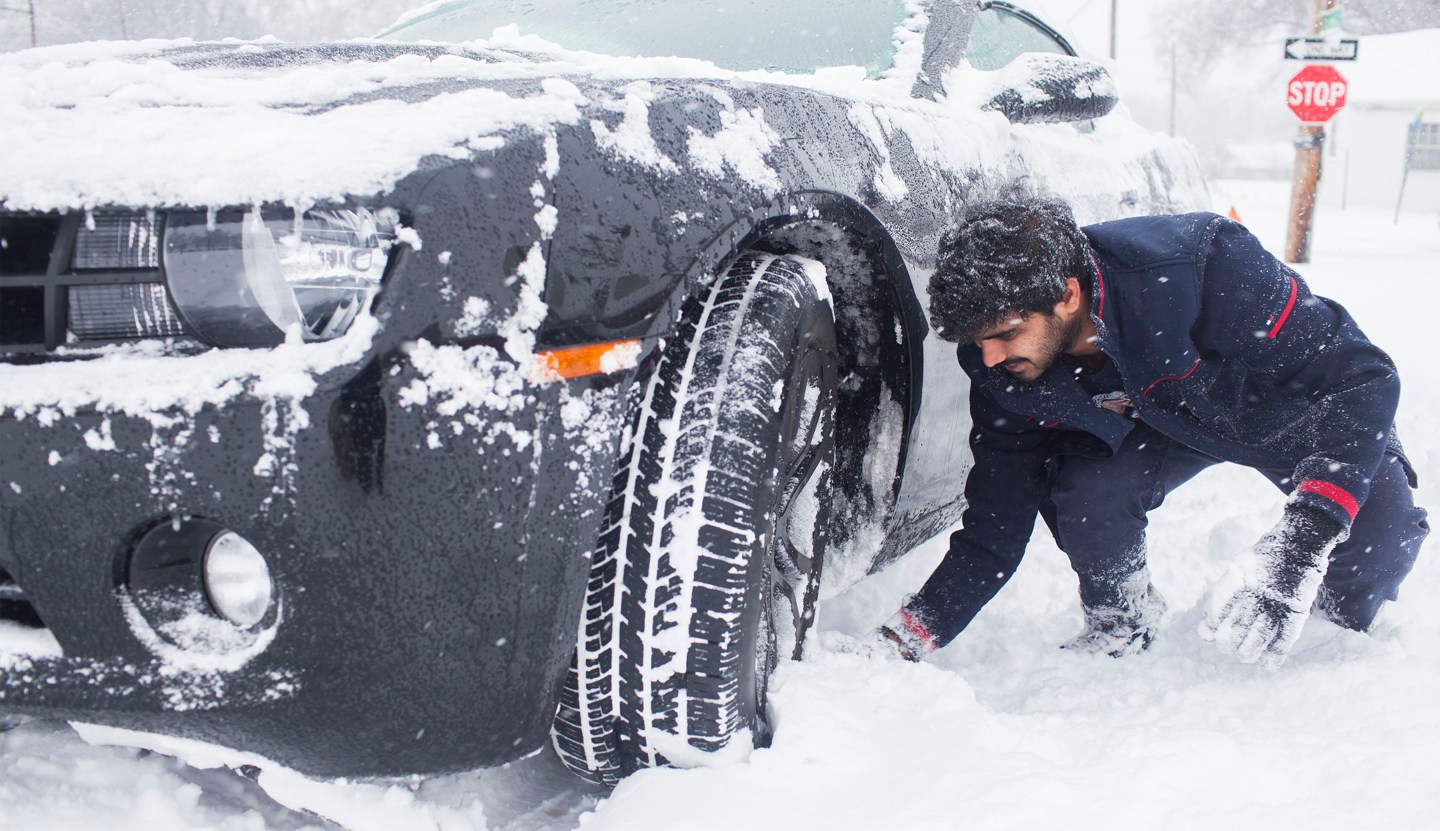 Srikanth Bellamkonda of Andhra Pradesh, India, digs out his car after getting stuck in the snow on Friday, Jan. 22, 2016, in Bowling Green, Ky. A massive blizzard began dumping snow on the southern and eastern United States on Friday, with mass flight cancelations, five states declaring states of emergency and more than two feet (60 centimeters) predicted for Washington alone. Blizzard warnings or watches were in effect along the storm's path, from Arkansas through Tennessee and Kentucky to the mid-Atlantic states and as far north as New York. (Austin Anthony/Daily News via AP) MANDATORY CREDIT
Photograph by Austin Anthony — AP

A monster blizzard that has paralyzed much of the U.S. East Coast intensified on Saturday as it barreled into New York City, forcing the closure of all bridges and tunnels into the largest U.S. city and prompting a travel ban on area highways.

At least 13 people have been killed in weather-related car crashes in Arkansas, North Carolina, Kentucky, Ohio, Tennessee, and Virginia, and a 14th person died of a heart attack while shoveling snow in Maryland.

After dumping nearly two feet of snow on the Washington, D.C., area overnight, the storm unexpectedly gathered strength as it spun northward and headed into the New York metropolitan area, home to about 20 million people.

By Saturday afternoon, forecasters had bumped their snowfall predictions to up to 30 inches in New York and New Jersey, and snowfall was picking up again in the nation’s capital after a midafternoon lull.

The National Weather Service said 20 to 25 inches was most likely in New York, but would not rule out higher accumulations.

As a consequence, New York Gov. Andrew Cuomo declared a state of emergency as 10 other state governors have done. He also announced a ban on all travel on New York City area roads, as well as Long Island, except for emergency vehicles, as of 2:30 p.m. EST. All bridges and tunnels into the city from New Jersey will also close, he said.

Subways running above ground and trains operated by the Long Island Rail Road and Metro-North will halt service at 4 p.m. EST because snow falling at a rate of 3 inches per hour proved too much for plows on roads and railways, Cuomo said.

The impact of the travel ban on the New York’s thriving financial services industry is likely to be minimal over the weekend, and it was too soon to tell how much the heavy snow will affect Wall Street when it is due to reopen on Monday.

On Broadway, however, the impact was immediate. Theaters canceled Saturday matinee and evening performances at the urging of New York City Mayor Bill de Blasio, who warned that the storm may rank among the top five blizzards ever to hit the largest U.S. city.

“We’re loving it. We definitely want to come back,” said Michelle Jones, 46, a mortgage company controller who had tickets to see The Phantom of Opera with her daughter.

“We love the snow because we don’t get this in Atlanta,” she said, about an hour before the Broadway shutdown was announced.

The intensifying storm brought heavy bands of snowfall across Long Island, New York City, and northeast New Jersey that generated 2 to 3 inches of snow an hour, with wind gusts of up to 50 miles per hour, the NWS said.

More than 4,300 U.S. flights were canceled, including virtually all travel into New York City airports, according to the FlightAware.com aviation data and tracking website and transportation officials.

The brunt of the blizzard reached the New York City area after battering Washington, D.C., where snow had piled up outside the White House and across the capital.

Even so, some residents said they just could not resist seeing famous monuments frosted with snow.

“We haven’t made snow angels yet, but we’re looking forward to doing that in front of the White House,” said Robert Bella Hernandez, 38. “We’re just going to walk around, see some snow covered D.C. landmarks. And then when it’s unsafe, maybe go back in for a minute.”

Higher tides than during Sandy

Tides higher than those caused by Superstorm Sandy three years ago pushed water on to roads along the Jersey Shore and Delaware coast and set records in Cape May, N.J., and Lewes, Del., said NWS meteorologist Patrick O’Hara.

Even so, there were only a few evacuations reported along the New Jersey Shore, where thousands of residents had to abandon their homes during the devastating 2012 storm.

Officials in the coastal counties of Ocean and Monmouth issued voluntary evacuation notices for some communities and a mandatory order for some homes in the beach town of Barnegat.

The next high tide, due at about 7 p.m. EST, is expected to be higher than usual because of the full moon, elevating the concern of residents in vulnerable areas.

At least 13 people have been killed in weather-related car crashes in Arkansas, North Carolina, Kentucky, Ohio, Tennessee and Virginia, and a 14th person died of a heart attack while shoveling snow in Maryland.

The Pennsylvania National Guard has been called in to help clear I-76 in the western part of the state and ensure stranded people have food, water, and fuel for their cars. Governor Tom Wolf, who said he would not impose a travel ban unless conditions worsen, said about 500 vehicles remain trapped on a section of the Pennsylvania Turnpike.

By the time the storm is over in Pennsylvania, some southern parts of the state will see 24 to 30 inches. One area near Gettysburg is expected to get 36 inches, officials said.

In Washington, moderate snow was expected to keep falling until late Saturday, with the deepest accumulation of 23 inches recorded in Poolesville, Md., north of the nation’s capital.

The storm developed along the Gulf Coast, dropping snow over Arkansas, Tennessee and Kentucky on Friday. On the coast, warm, moist air from the Atlantic Ocean collided with cold air to form the massive winter system, meteorologists said.

It was forecast to move offshore in southern New England early next week.