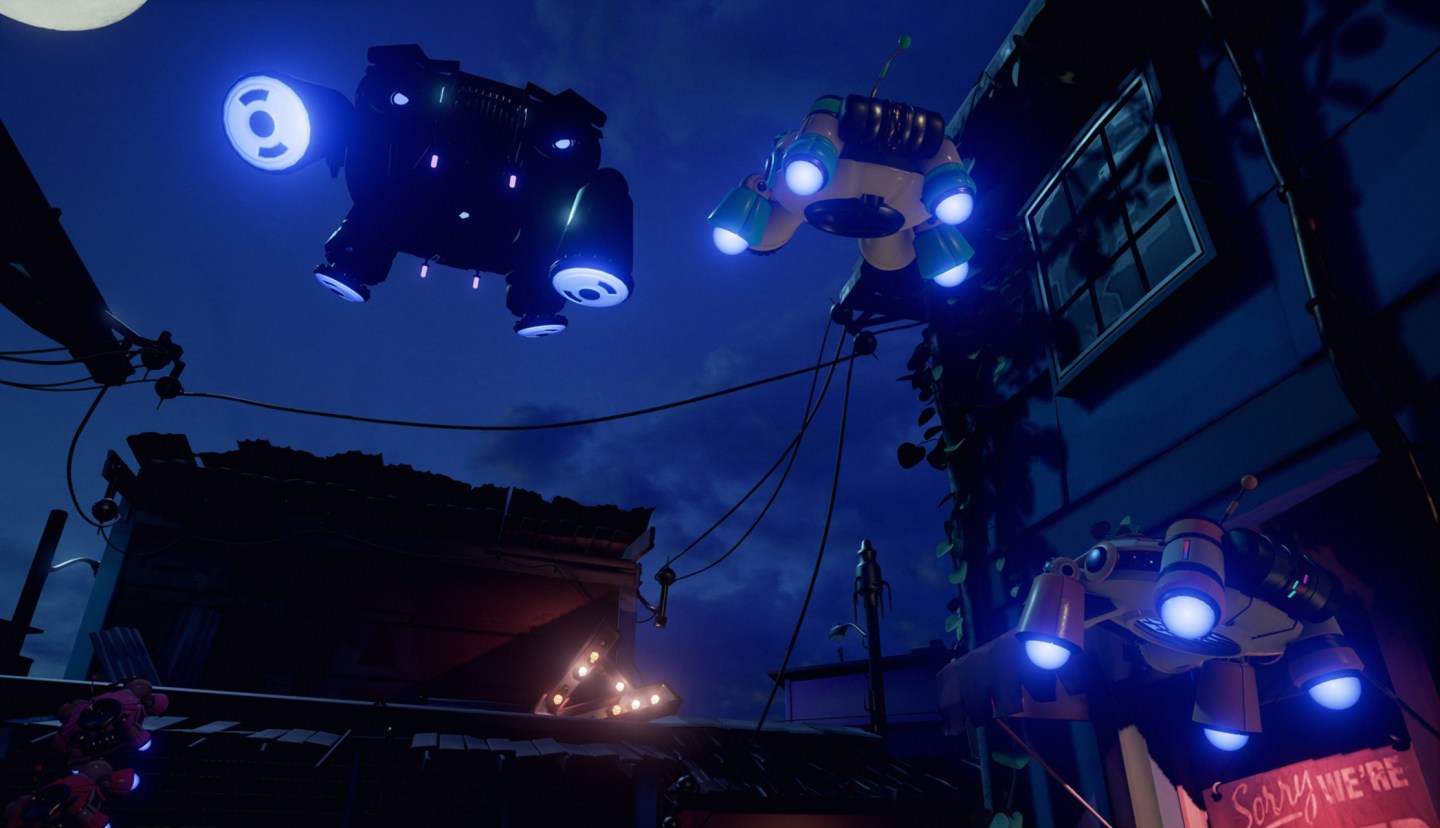 An interactive product demo at NAB will let attendees explore all aspects of an F-14 fighter jet, including viewing detailed 3D models of the jet’s operating and weapons systems, firing its rocket payload, and watching both virtual and live-action versions of the plane’s tactical maneuvering capabilities. The company will also showcase Reco, an interactive story focused on some curious robot aliens that pulls the viewer into their world.

Malte Wagener, head of Deluxe VR, says both of these experiences were produced in less than 10 weeks.

“Reco showcases and highlights the ability to tell a story with only visuals,” Wagener says. “We went back to the era of silent movies, where a story is really told between the actor, the camera, and lighting”

Wagener says the fighter jet demo offers a preview of how training, engineering, education, and learning can work in virtual reality.

“The project speaks to new opportunities for transferring information and knowledge to address one of the key issues in teaching: How do you enable students to interact with the subject matter they’re learning about? How do you interest and excite them?” Wagener says. “VR has transformational potential here.”

Wagener believes NAB 2016 will mark the point where attendees will be seeing more substantial VR experiences and use cases.

“In the past 24 months it has been mostly short demos and visual slices, and now that we are past a first critical mass in regards to developers and content creators, we will see a new level of content quality to follow,” Wagener says.

Deluxe, which provides digital media and entertainment services across film, video, advertising, and online content from capture to consumption, has been following virtual reality over the last few years.

Facebook’s $2 billion acquisition of Oculus VR in 2014 opened the floodgates for investment in the market. Both Oculus Rift and the HTC Vive VR headsets are available to consumers today, as well as Samsung’s Gear VR and Google Cardboard. Sony launches PlayStation VR in October.

“We see both the market for VR, and VR as a technology, as more of a marathon than a sprint, and have approached our strategy with that in mind,” Wagener says. “Ultimately, Deluxe always pushes for better solutions and new thinking, and as a company we have now built the capabilities into a truly dedicated team, while being flexible to also fully utilize the scale that Deluxe as a whole offers.”

Deluxe VR is already working on projects with Kellogg’s (K), General Electric (GE), and Nokia (NOK), as well as others, according to Wagener.

Nokia has entered into a postproduction partnership with Deluxe and Deluxe VR to provide technical consultation, editorial, VFX, color, and stitching services for immersive content created with its Ozo VR camera system.

“We’ve developed a proprietary workflow and a set of tools that enable creators to go through long shoots where they receive the proper support from pre- to postproduction,” Wagener says. “It’s one thing to produce a two-minute piece, but an entirely different proposition to do a 20-minute shoot.”

While the 360-degree video market is in its early stage today, virtual reality video could grow to the $5 billion to $10 billion revenue range by 2020, according to Tim Merel, managing director at Digi-Capital, which advises VR companies.

Wagener believes virtual reality will emerge as its own form of entertainment in the coming years. Fox Labs has already experimented with the technology with The Martian Virtual Reality Experience, which will launch this year across all platforms.

“Once the great storytellers of our time like Spielberg, Abrams, Scorsese, or Scott get to spend some real time with the technology, it will be very interesting to see the different approaches to it,” Wagener says. “And Deluxe is ready to support them.”