Auto sales, and backing down in Hong Kong — 5 things to know today 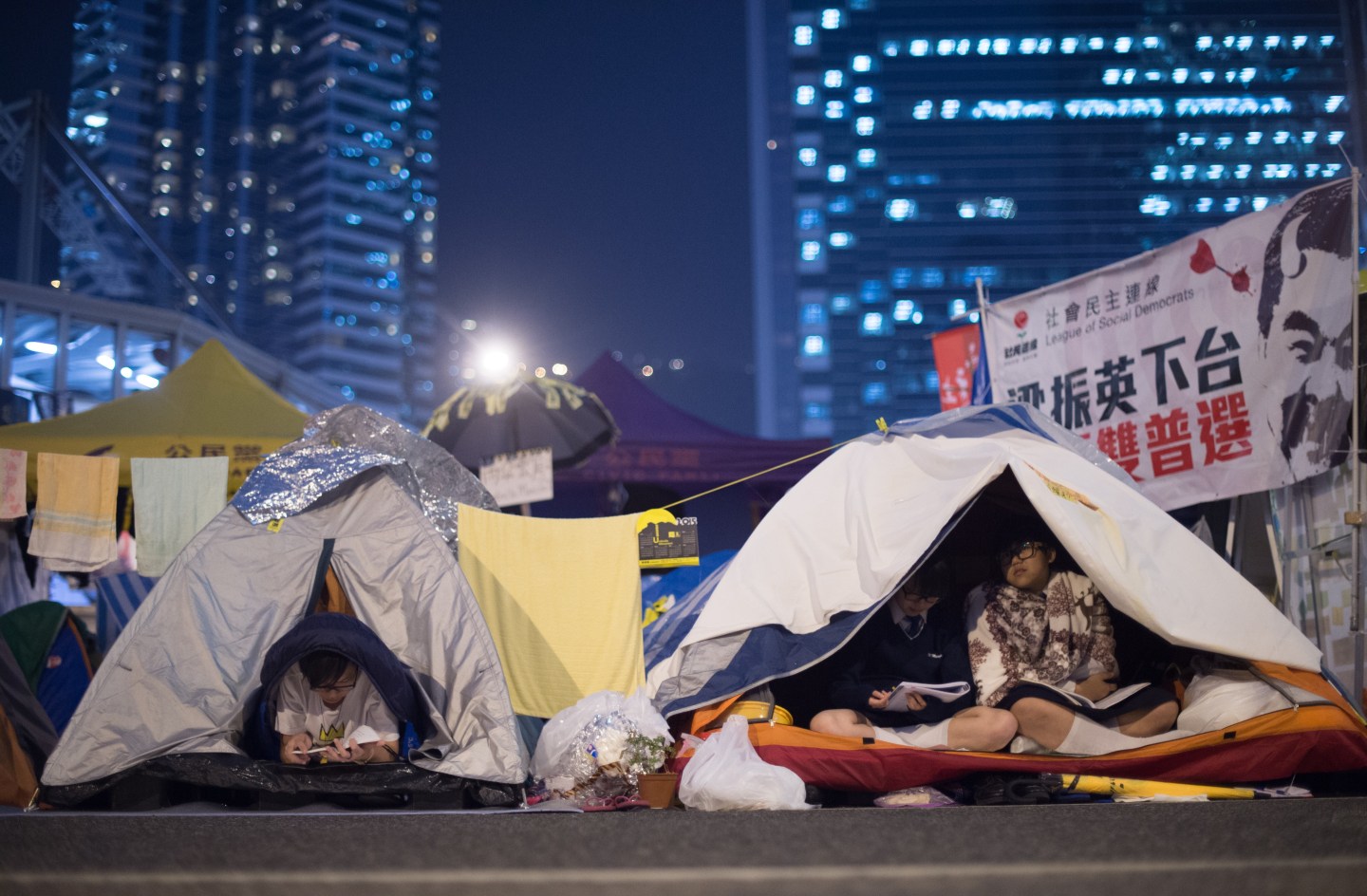 Students read books in their tents at the pro-democracy movement's main protest site in the Admiralty district of Hong Kong on December 2, 2014. The leader of the student pro-democracy group Scholarism, Joshua Wong and two other student demonstrators went on hunger strike on December 1, raising the stakes after one of the worst nights of violence to hit the demonstrations. AFP PHOTO / JOHANNES EISELE (Photo credit should read JOHANNES EISELE/AFP/Getty Images)
Photograph by Johannes Eisele — AFP/Getty Images

Finish all your holiday shopping yet? Don’t feel bad if you haven’t — retail sales data suggest you aren’t the only one holding out for better deals. But while Thanksgiving weekend sales disappointed observers, Cyber Monday’s performance looked a bit better. Meanwhile, protests in Hong Kong could potentially wind down after leaders of the pro-democracy campaign told students it’s time to retreat after thousands clashed with police earlier this week. Auto sales are also in the news today, with major manufacturers — including General Motors (GM) and Ford (F) — set to report their November sales figures. And opening statements are set to begin in a digital music class action case involving Apple (AAPL) that could cost the tech giant around $1 billion if it loses.

1. The end of the Hong Kong protests?

Three co-founders of a pro-democracy campaign in Hong Kong have reportedly told protesting students that it’s time to retreat, expressing concern that the students’ protest camps faced too many dangers of worsening violence. This comes after thousands of protestors clashed with police earlier this week at the demonstration’s main encampment, where police in riot gear fought protestors with the use of batons and pepper spray. The protestors have been calling for free elections in Hong Kong.

Automakers report November sales on Tuesday and are projected to deliver a 1.6% increase from the same period a year ago, according to industry observer Edmunds.com. Sales get a lift from the Black Friday weekend, in part due to efforts by car dealers in recent years to use the holiday as an opportunity to drive traffic to their showrooms. While analysts say Black Friday isn’t as important as the Memorial Day or Labor Day holidays, it is quickly becoming one of the bigger weekends of the year for dealers.

California-based Avanir (AVNR) agreed to be acquired by Japanese drug maker Otsuka Pharmaceutical Co., a deal that has been approved by boards of directors of both companies. Avanir, which develops treatments for central nervous system disorders, has one approved treatment, Nuedexta, and several other treatments in various stages of clinical trials. The company reported $75.4 million in total revenue last year.

Stock markets are recovering Tuesday, Reuters reports, as key emerging market currencies including the Russian double stabilized against the dollar. Oil’s sharp decline has caused some concern in markets that are heavily exposed to the commodity, but Reuters says observers found some solace in commentary from U.S. policymakers and the head of the International Monetary Fund that assert lower fuel costs would boost the world economy.

Online sales for the Monday following the Thanksgiving weekend, now known as “Cyber Monday,” rose 8.1% over last year’s numbers according to preliminary data. That sales growth is crucial for the industry, especially after the National Retail Federation’s announcement that overall retail sales slipped 11% over the four-day holiday weekend. Wal-Mart (WMT) has said that this year’s Cyber Monday was “the biggest online day in its history for orders,” and said it saw more than 1.5 billion page views between Thanksgiving and Cyber Monday.