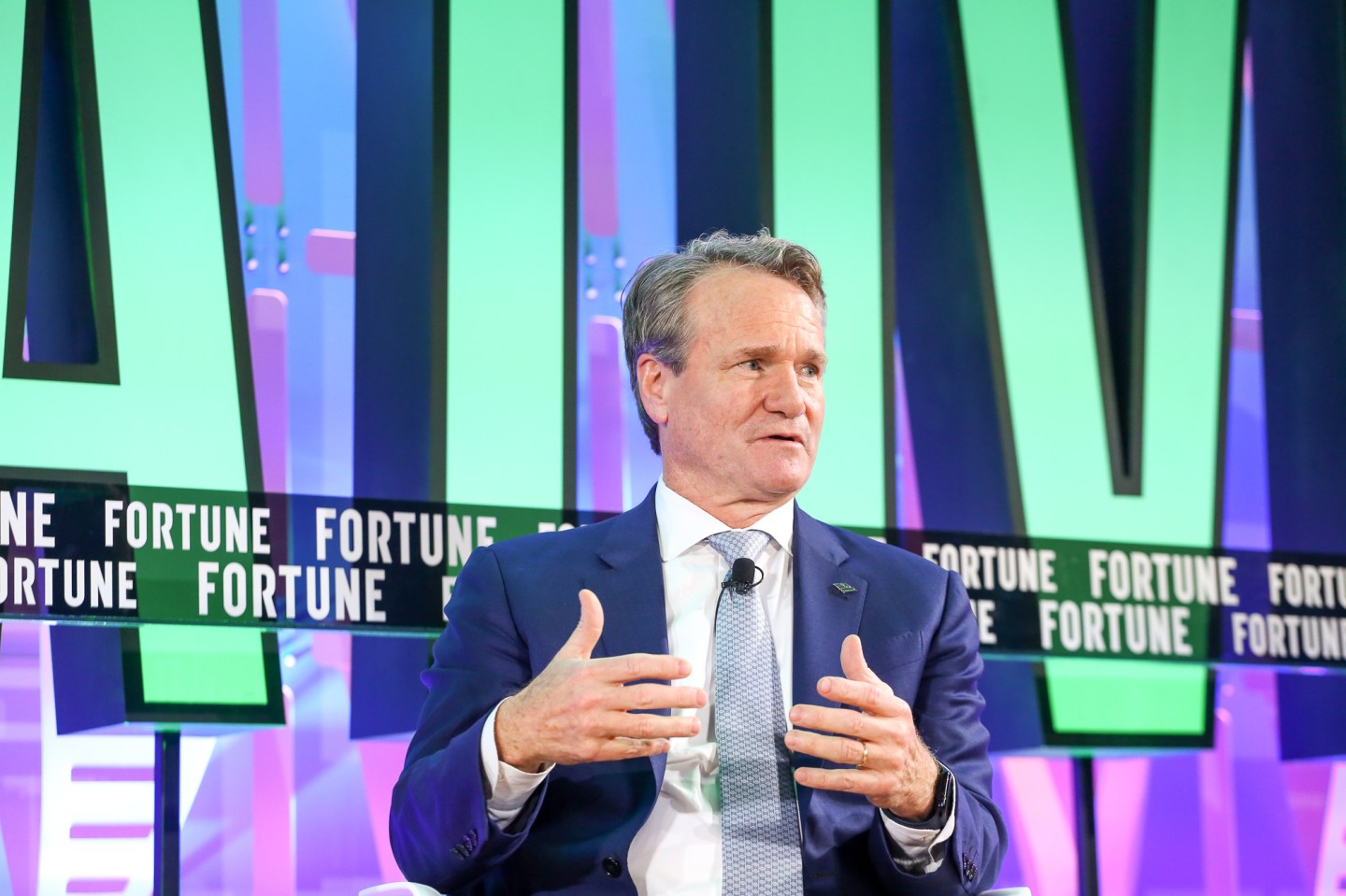 For the fourth time in a row, the Federal Reserve hiked interest rates by another 0.75% on Wednesday in attempt to bring inflation back down to 2% over time. Although some economists have predicted a deep recession will take place, Bank of America CEO Brian Moynihan has a different opinion.

A recession next year “almost has to happen because the rates will slow housing down, cars down,” Moynihan said during Fortune’s annual CEO Initiative event on Wednesday in Palm Beach. “But if you look at the same economists, they predict unemployment not to go much above five [percent],” he said. “So, it’s hard to believe you can have a deep recession as people work,” he added. “That’s the debate.” And Moynihan pointed out that consumers are still spending. “If you look at customer data through Oct. 24, customers have spent 8.5% more than they spent last year for those three weeks,” he said.

In a discussion with Fortune CEO Alan Murray about a more human-centered approach to capitalism that takes into account the needs of all stakeholders, Moynihan, who is also chair of the World Economic Forum’s International Business Council, emphasized Bank of America’s commitment to sustainability. He has been working with World Economic Forum and the Sustainable Markets Initiative to create a standardized set of stakeholder metrics. And Moynihan has been on a mission to persuade companies to adopt them. He believes profit and purpose are not mutually exclusive.

“The world has told us what they want from all of us,” he said. “That’s the [UN] Sustainable Development Goals. Now, 197 countries said this is good development. If we don’t drive good development with capitalism—it won’t happen.” And as a result, whether or not capitalism is the right system gets called into question, Moynihan said. “We’ve got to simplify what it means to be successful,” he said. “You need metrics so society can see we’re making progress.”

“At the end of the day, we’re building record profits and record purpose in our company,” Moynihan said. He continued, “There’s a business attached to this. The brand is the highest it’s ever been.” The company has its highest number of employees and turnover is at its lowest, he said.

Bank of America CFO Alastair Borthwick said on the company’s recent Q3 2022 earnings call that employee headcount for the quarter increased by 3,500, including salespeople, specialists, and technology professionals. “We continue to make steady investments in our people, technology, marketing, and financial centers,” Borthwick said during the call.

Bank of America reported net revenue increased 8% to $24.5 billion for the quarter, beating estimates. Net income decreased to $7.1 billion from $7.7 billion from the same time last year, as profits fell in the wealth management and global banking segments. Investment banking revenue declined 46% in the quarter, but less than the 47% drop analysts were expecting. Borthwick recently told Bloomberg that “at this stage,” the bank isn’t planning to reduce the number of employees in the unit.

Regarding ESG investing and sustainability, there has been some pushback calling it “woke capitalism,” and critics say bank CEOs like Moynihan should just stick to business. “What do you say to those folks?” Murray asked him. “When you run a large financial institution, with a team, and all we do is transmit capitalism, [for someone to ask] ‘Are you a capitalist?’ What else could we be?” Moynihan said. Driving stakeholder capitalism is about aligning “capitalism to what society needs from us,” he said.

Morgan Stanley’s E-Trade released data from its monthly sector rotation study. The top three sectors in September and October were consumer discretionary (nonessential goods and services, like cars and entertainment), utilities, and communication services. The results are based on the trading platform’s customer notional net percentage buy/sell behavior for stocks that comprise the S&P 500 sectors. All three sectors increased between September and October, with utilities increasing from 2.74% to 8.67%, according to the report.

"As Amazon’s value drops below $1 trillion, this chart shows how dramatically the biggest tech heavyweights have fallen," a new Fortune report, delves into how "every one of the old Trillion Dollar Club has dropped by at least half a trillion dollars," Shawn Tully writes.

Jim Benson was named CFO at Dynatrace (NYSE: DT), a software intelligence company, effective Nov. 15. Benson will succeed Kevin Burns, who announced in May his intention to transition out of Dynatrace by the end of the year. Benson brings to the role more than 30 years of experience. He most recently served as EVP and CFO at Akamai Technologies, a global cloud services, and cybersecurity leader. Before joining Akamai, he spent 20 years at Hewlett Packard Company in various senior finance leadership positions.

Andrew Lazarus was named CFO at Validity, a provider of data management and email marketing success solutions. Lazarus will leverage his experience in finance and investor relations to scale the company for its next stage of growth. Previously, he has served as CFO at several companies, including Electric, Pilot Freight Services, and BAE Systems Applied Intelligence.

“Even if, as some prognosticators expect, U.S. inflation crests in the first half of 2023 and the Federal Reserve can slow or even stop the pace of rate increases, the U.S. dollar will still have a monetary tailwind to support it.”