As Amazon’s value drops below $1 trillion, this chart shows how dramatically the biggest tech heavyweights have fallen 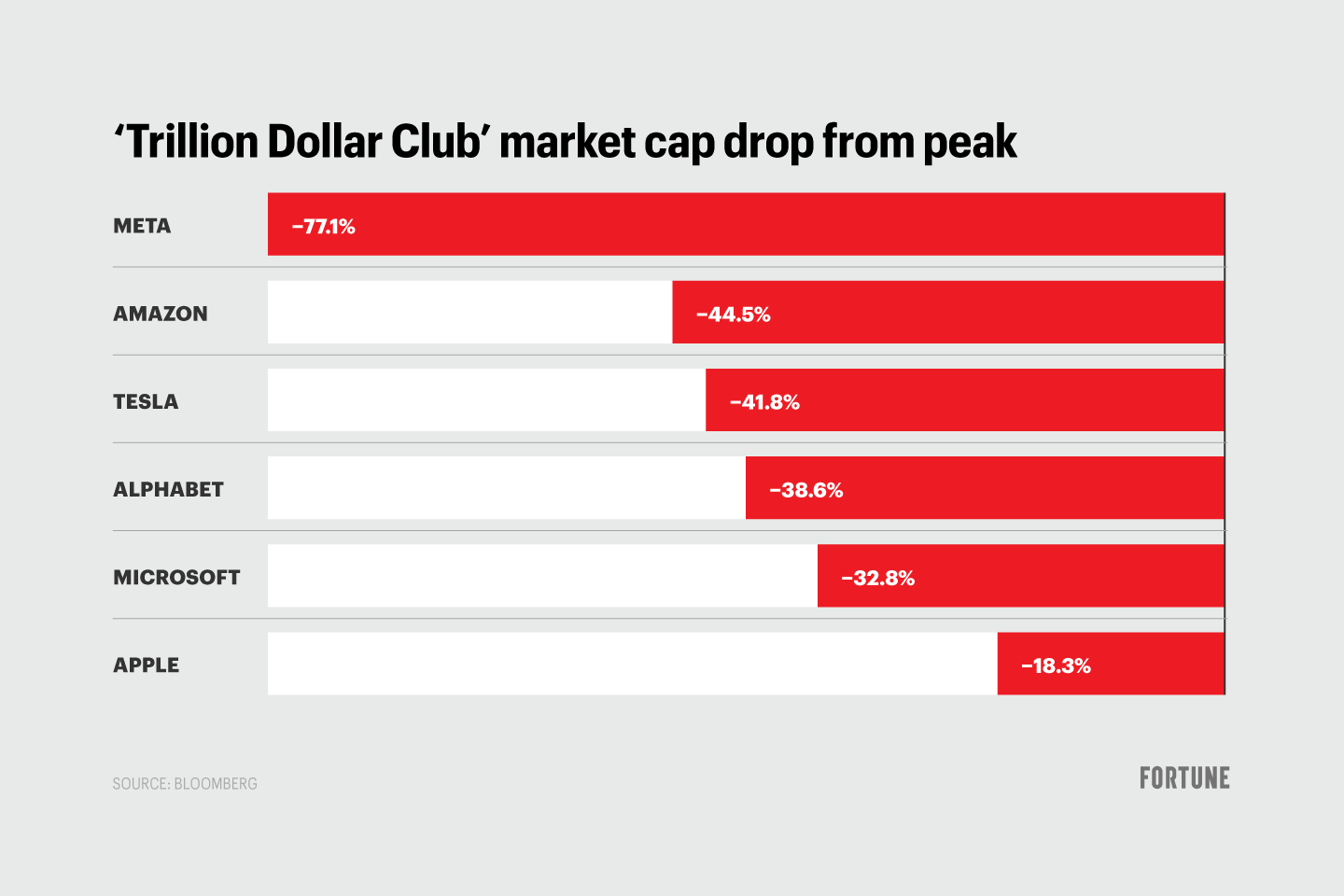 On November 1, Amazon reached a bleak milestone when its value dropped below $1 trillion for the first time since first crossing that landmark in early 2020. The e-commerce giant closed at $96.79, down 5.5% on the day and 20% in the past five sessions, most of the drop coming after a weak Q3 earnings report unveiled on October 27. In that span, Amazon’s market cap shrank by $250 billion or a quarter of a trillion dollars to $987 billion, one of the biggest dollar declines over a weeklong-period in the annals of capital markets.

Amazon is the most recent of the one-time “Trillion Dollar Club” to lose its membership. As recently as February, no fewer than six enterprises––Amazon, Apple, Microsoft, Alphabet (Google), Meta Platforms (Facebook) and Tesla—all sported valuations exceeding twelve figures. Since then, Meta was first to leave the elite assemblage followed by Tesla, so Amazon’s departure halves the roster to Apple, Microsoft and Alphabet. At their respective peaks (all reached last November and December, except for Meta’s summit in August of 2021) the present and former Trillion Dollar crew featured a combined valuation of $11.75 trillion. Last November, those half-dozen high-flyers accounted for staggering 21% of the total value of the Nasdaq 100.

Since hitting their highs, the six have lost a combined $4.35 trillion, or 37% of the almost $12 trillion they commanded at their pinnacles. That’s the equivalent over 14% of the 100’s current market cap of roughly $30.6 trillion. Overall, from their top ticks to today, the trillion contingent has underperformed the Nasdaq 100’s fall of 32% from its November record by 5 points.

Every one of the old Trillion Dollar Club has dropped by at least half a trillion dollars, with Tesla cratering by $517 billion, Apple $547 billion, Alphabet $771 billion, Meta $831 billion, Amazon $837 billion, and Microsoft $846 billion. Famously posting the largest percentage decline was Meta at (-77%), followed by Amazon (-45%), Tesla (-42%), Alphabet (-39%) and Microsoft (-32%). The best performer: Apple at -18%. The iPhone-maker's $2.44 trillion valuation (which briefly touched $3 trillion in January) renders it the sole occupant of the super-exclusive $2 trillion clubhouse it once shared with Microsoft (now $1.7 trillion) and Alphabet ($1.18 trillion).

Despite their big drops, the former and present Trillion Dollar Club-mates are anything but cheap

Overall, what we'll call the big six are still expensive, even after their epic retreat. Think of them as one big company we'll call Triple A-MMT, Inc. All together, Triple A-MMT earned $259 billion over the last four quarters. Hence, the combined PE is a still pricey 29. Of course, some look far more richly priced than others. Despite the big recent revaluation, Amazon trades at 94 times earnings, and Tesla's PE stands at 71. Apple and Microsoft share a 25 multiple, meaning the market's expecting robust earnings growth at those still-lofty valuations on near-all-time-high, maybe unsustainable earnings. Meta's PE is a mere 9, but its profits are falling fast, making it hard to calculate a stable ratio based on where they'll finally settle. The only "member" that's even remotely in value territory: Alphabet at a more or less market multiple of 18.

The hollowing of the old Trillion Dollar Club represents an historic re-rating of tech titans that were already selling at premium valuations before COVID struck, then greatly benefited from the stay-at-home economy that drove their earnings to what now look like slippery mountaintops. The Wall Street analysts and equity strategists mainly told us that their profits would grow from those gigantic, never-before-seen levels to justify their caps of well over $1 trillion for Meta, Tesla and Amazon, to $2 trillion and up for Microsoft and Alphabet, and for Apple, roughly $3 trillion at its apex. But factors such as "real interest rates" and future earnings growth that govern stock prices aren't just returning to normal, they're going from fabulously favorable to highly unfavorable, in a jiffy. Profits that couldn't keep rising from windfall highs are now predictably falling, and crushing market caps in the process. It was just a matter of time before gravity took hold. And shattered the Trillion Dollar Club.