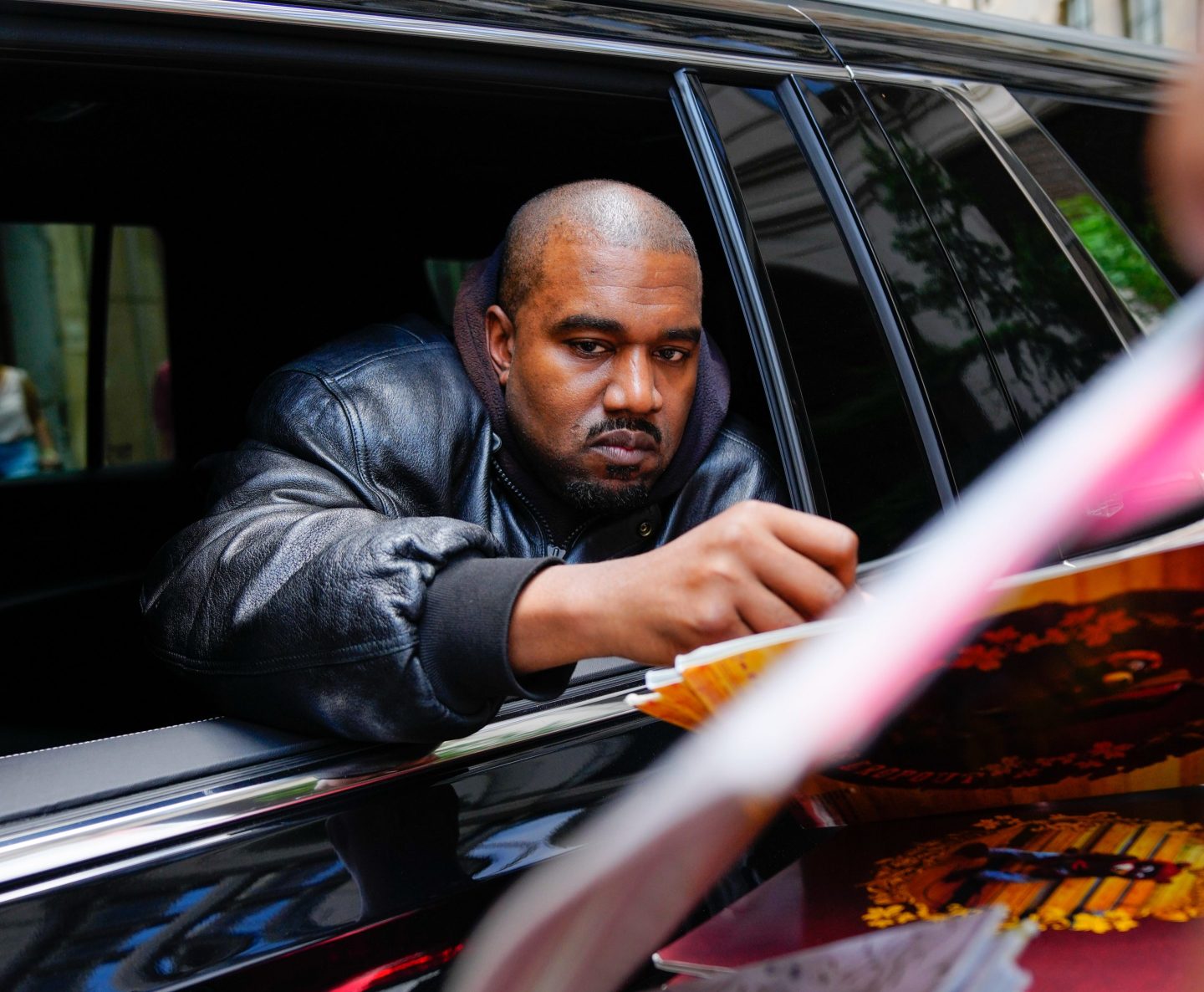 Kanye West usually has a Teflon-like ability to remain unscathed after 18 years of controversies.

In the past, West, who now legally goes by Ye, has made claims that slavery was a choice, invited known homophobe DaBaby and accused abuser Marilyn Manson to perform with him, and defended convicted rapist Bill Cosby.

He has asserted himself in politics by accusing George W. Bush of hating black people, aligned himself with divisive figures like Donald Trump, and run his own presidential campaign founded on antiabortion, capital punishment, and the return of school prayer—to no avail.

But while Ye has always managed to return to the top echelons of the music and fashion industry, his latest controversy may have just burned his empire to the ground.

What began as a controversial Oct. 3 Paris fashion show, where Kanye sent models down the runway wearing White Lives Matter shirts, has ended in almost all his corporate sponsors and partners dropping him following an unhinged, conspiratorial anti-Semitic rant.

Ye told reporters outside his daughter’s basketball game on Oct. 22 that after attacking the Jewish people, “they’ll try to mute you at all costs.”

But when asked what he would say to people who are trying to cancel him, Ye shrugged it off and laughed: “I’m here. What are we talking about? We here. We ain’t going nowhere, baby.”

Over his prolific career spanning 18 years, Ye has been a mainstay of the entertainment industry, but whether he stands to survive his latest self-destructive test remains an open question.

West said in a Tucker Carlson interview on Oct. 6: “The answer to why I wrote ‘White Lives Matter’ on a shirt is because they do.

“I thought the shirt was a funny shirt, I thought the idea of me wearing it was funny,” Kanye told Carlson, and when he asked his father, Ray West, a former Black Panther, if he thought it was funny, he responded “just a Black man stating the obvious.”

But before Ye went on Carlson, he gave a different account of why he put White Lives Matter on the shirts, posting on his Instagram on Oct. 4: “Everyone know that Black Lives Matter was a scam now it’s over you’re welcome.”

The shirts set off an outcry in the fashion world, which an embittered Ye viciously defended on his Instagram. Ye attacked Supreme creative director Tremaine Emory, model Gigi Hadid, and former Vogue editor Gabriella Karefa-Johnson in what he claimed was a “WAR.”

But things took a turn when Sean “Diddy” Combs posted on his Instagram hitting back against the YZY show, saying he “did not rock” with the White Lives Matter movement. “All America has planned for [Black Americans] is poverty, incarceration, and death,” Diddy said in the Instagram video.

Ye then posted a text conversation with Diddy on his Instagram, accusing Diddy of being controlled by Jewish people. “Ima use you as an example to show the Jewish people that told you to call me that no one can threaten or influence me.”

After not having posted for two years, Ye returned to the platform on Oct. 8 tweeting: “I’m a bit sleepy tonight but when I wake up I’m going death con 3 on JEWISH PEOPLE.”

Ye bases his anti-Semitism on the fact that he can’t really be anti-Semitic since “black people are the real Jews.”

Five days after the Tucker Carlson interview, new unaired footage was revealed by Vice on Oct. 11, showing a more incoherent and paranoid Ye.

He claimed black people were the real “12 lost tribes of Judea,” that “fake children” and “professional actors” were being placed in his house to sexualize his kids, and that Margaret Sanger, a “known eugenics,” along with KKK member, founded Planned Parenthood to control the Black population. Carlson edited down the final interview before airing.

Two days later, on Oct. 14, JPMorgan announced it would be ending its association with Ye and his brand Yeezy—although the bank’s decision predated Ye’s anti-Semitic comments.

Ye then appeared on Drink Champs, a hip-hop community podcast hosted by N.O.R.E. and DJ EFN, on Oct. 16 to continue his rant. The interview was taken down a day after it was posted for spreading false information about the death of George Floyd (Ye claims Floyd died of a fentanyl overdose rather than police brutality), but one important line from the interview circulated on social media showing Ye boasting about his untouchable status.

“I can say anti-Semitic things, and Adidas can’t drop me. Now what? Now what?” Ye is seen asking in a short video clip from the interview.

West offered to buy the controversial “free-speech” platform Parler, which is known for housing right-wing extremists and espousing misinformation and conspiracy theories, and Balenciaga began taking Ye’s imagery off of its website—making it the first corporate client to distance itself from Ye since the anti-Semitic comments began.

Ye called it the happiest day of his life, saying it weeded out the people who weren’t truly with him.

Ye’s decision to buy Parler aligned him with America’s conservative right wing. Ye said in a statement with Parler on Oct. 17: “In a world where conservative opinions are considered to be controversial, we have to make sure we have the right to freely express ourselves.”

While many came online to defend Ye, blaming his anti-Semitism on his diagnosed bipolar disease, his opinions nonetheless gave weight to white supremacists and antisemitic extremists in fringe hate groups.

Soon after Ye began his rant, the anti-Semitic hate group Goyim Defense League hung banners above freeways in Los Angeles that read “Kanye is right about the Jews,” while giving Nazi salute signs.

Soon Ye’s corporate clients began dropping one after another.

Balenciaga formally severed ties with Ye on Oct. 22, with parent company Kering telling fashion trade magazine WWD: “Balenciaga has no longer any relationship nor any plans for future projects related to this artist.”

Footlocker and Gap began removing all Yeezy merchandise from their stores, and even collectors of his shoes and clothes began offloading them, deflating the market for secondhand Yeezys by 30%.

But the biggest loss for Ye was Adidas ending its partnership with Yeezy. Adidas was Yeezy’s main source of income, and the loss of his partnership with the German sportswear giant led to the market valuation of Yeezy plummeting and $1.5 billion evaporating from his net worth.

Ye has few places to turn to.

While Ye is free to continue designing new shoes, he may have some trouble making any money from them.

As he looks to partner with other fashion houses and resume collecting royalties, there may not be many clients willing to work with the toxic Ye brand.

This played out in action on Wednesday as Ye showed up unannounced at the Manhattan Beach, Calif., headquarters of shoemaker Skechers and was promptly escorted off the property.

A spokesperson for Skechers told TMZ that the company “is not considering and has no intention of working with West. We condemn his recent divisive remarks and do not tolerate antisemitism or any other form of hate speech.”

Over the last three weeks, Ye has dug himself into a hole, with even the most ardent Kanye fans finding it difficult to defend his words or his new status as an anti-Semitic mouthpiece for America’s growing extremist right wing.

And while Ye has usually managed to survive and thrive in controversy, there’s a big question mark over whether he can do it again from here.