‘I can say anti-Semitic things, and Adidas can’t drop me. Now what?’ As Kanye West taunts Adidas, calls grow for German sportswear giant to cut ties 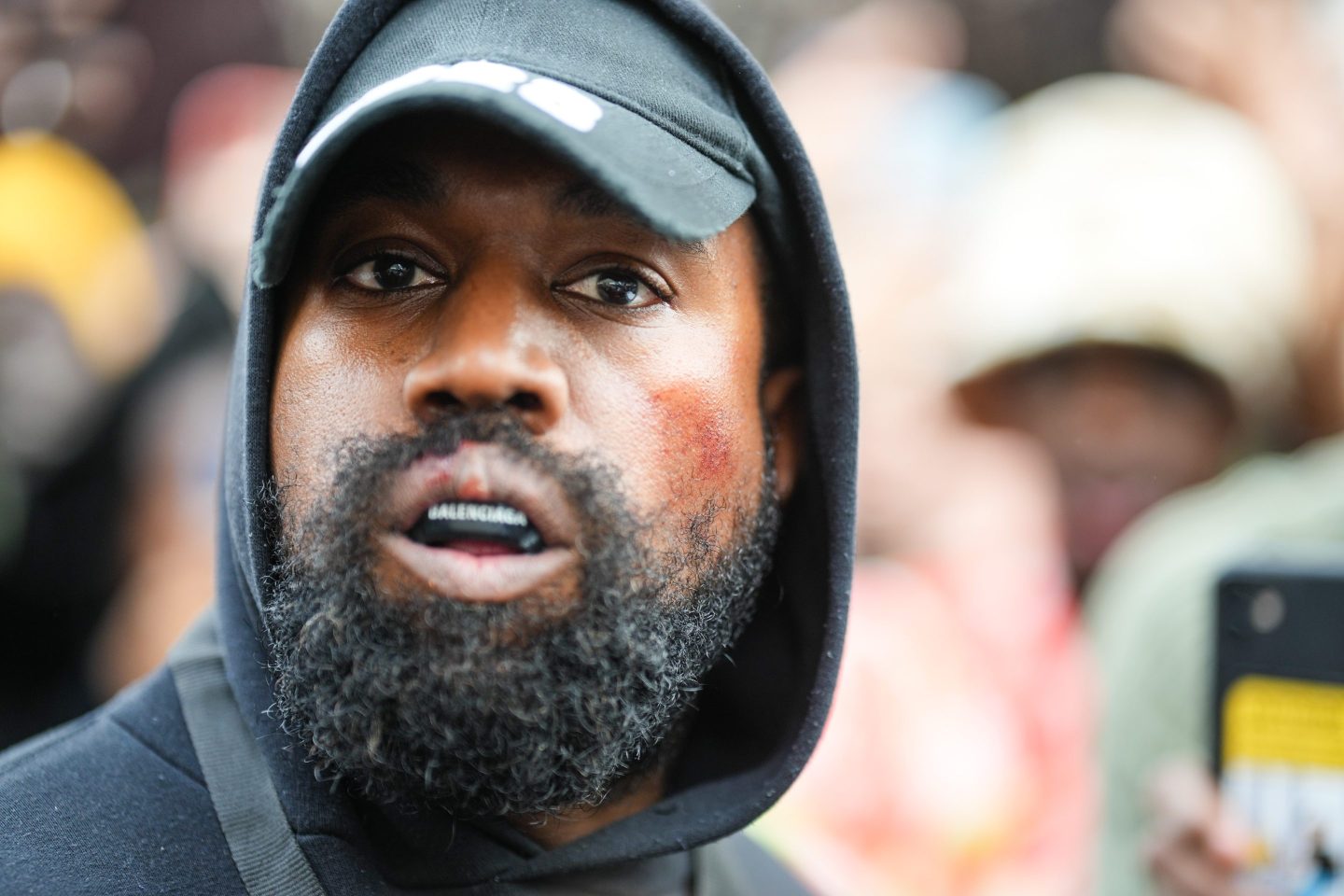 #BoycottAdidas is trending on Twitter after a video emerged of Kanye West saying, “I can say anti-Semitic things, and Adidas can’t drop me. Now what?”
Edward Berthelot—GC Images

But the German sportswear giant may not be able to ignore the controversy for much longer after Kanye West taunted the company by saying he could be as anti-Semitic as he wanted and still have the retailer’s support.

“I can say anti-Semitic things, and Adidas can’t drop me. Now what? Now what?” Kanye is seen asking in a short video clip from the Oct. 16 episode of Drink Champs, a hip-hop community podcast hosted by N.O.R.E. and DJ EFN, which has since been taken down.

The video has incited fresh calls for the German sportswear giant to drop Kanye West, and the hashtag #BoycottAdidas has been trending on Twitter since the clip was posted on Oct. 21.

Kanye West was recently locked out of Instagram and Twitter, after saying he would go “Death Con 3 on JEWISH PEOPLE,” and he has since continued an anti-Semitic attack on the “Jewish media” and “Jewish Zionists,” for allegedly profiting off Black people in the music industry.

Adidas already put its Yeezy deal on review following West’s controversial Oct. 3 YZY show at Paris Fashion Week, where models walked the runway wearing “White Lives Matter” shirts. Adidas said on Oct. 7 that it would review its troubled partnership, noting “we will continue to comanage the current product during this period,” Adidas said in a statement.

But while Adidas mulls whether to drop Kanye West and the highly profitable Yeezy brand from its product offering, the company released the Adidas Yeezy Boost 350 v2 in a brand new color, Salt, on Sunday, which has already been bought and resold 899 times on online reseller marketplace StockX.

The mounting publicity crisis comes at a bad time for Adidas.

In its latest third-quarter earnings report, published last Thursday, Adidas lowered its forecast for this year’s operating margin from 7% to 4% because of an overhang of inventory that will have to be sold at a discount. Adidas warned unsold goods were piling up in warehouses due to deteriorating store traffic trends in Greater China and a slowdown in demand in Western markets since September.

The news sent Adidas shares slumping as much as 9.1%—erasing all the gains made during CEO Kasper Rørsted’s six-year tenure and leaving it with a market value about a sixth of that of U.S. rival Nike. Faced with declining earnings, Adidas might be inclined to keep Kanye West on its payroll, as the Yeezy line accounts for an outsize percentage of Adidas sales.

Although Adidas does not report specific sales numbers from the Yeezy arrangement, which began in 2013 and expires in 2026, Morningstar analyst David Swartz estimates Yeezy sales for Adidas to be around $2 billion annually—potentially making up 10% of Adidas’s total sales.

“Ten years ago, Adidas was struggling in the U.S., the largest sportswear market. Thanks, in part, to Yeezy, its U.S. business has rebounded,” Swartz said. “It has helped bring its North America business back to relevance, and it has made Adidas relevant in the collectors’ market and probably allows it to reach a demo that it has missed.”

Kanye West has remained vague on the future of his partnership with Adidas, telling reporters outside his daughter North West’s basketball game on Oct. 22 that “we’re going through legal right now, so anything can happen.”

Adidas did not respond to Fortune’s request for comment by the time of publication.

The Anti-Defamation League, a Jewish NGO, has started a campaign called #RunAwayFromHate to allow people to contact Adidas directly and demand the company condemn West’s comments.

The ADL wrote in an open letter to Adidas, “In light of Kanye West’s increasingly strident antisemitic remarks over the past few weeks, we were disturbed to learn that Adidas plans to continue to release new products from his Yeezy brand without any seeming acknowledgment of the controversy surrounding his most recent remarks.”

They note that while Adidas has condemned West’s anti-Semitism, hate groups like White Lives Matter and the Goyim Defense League are celebrating and promoting Ye’s comments.

“We urge Adidas to reconsider supporting the Ye product line and to issue a statement making clear that the Adidas company and community has no tolerance whatsoever for antisemitism,” the ADL letter says.

Kanye West also recently made a bid to buy the alt-tech social media platform Parler. “In a world where conservative opinions are considered to be controversial, we have to make sure we have the right to freely express ourselves,” Ye said in a press release on Oct. 17.