China’s tech sector has stumbled under Xi Jinping. Will anything change during his third term? 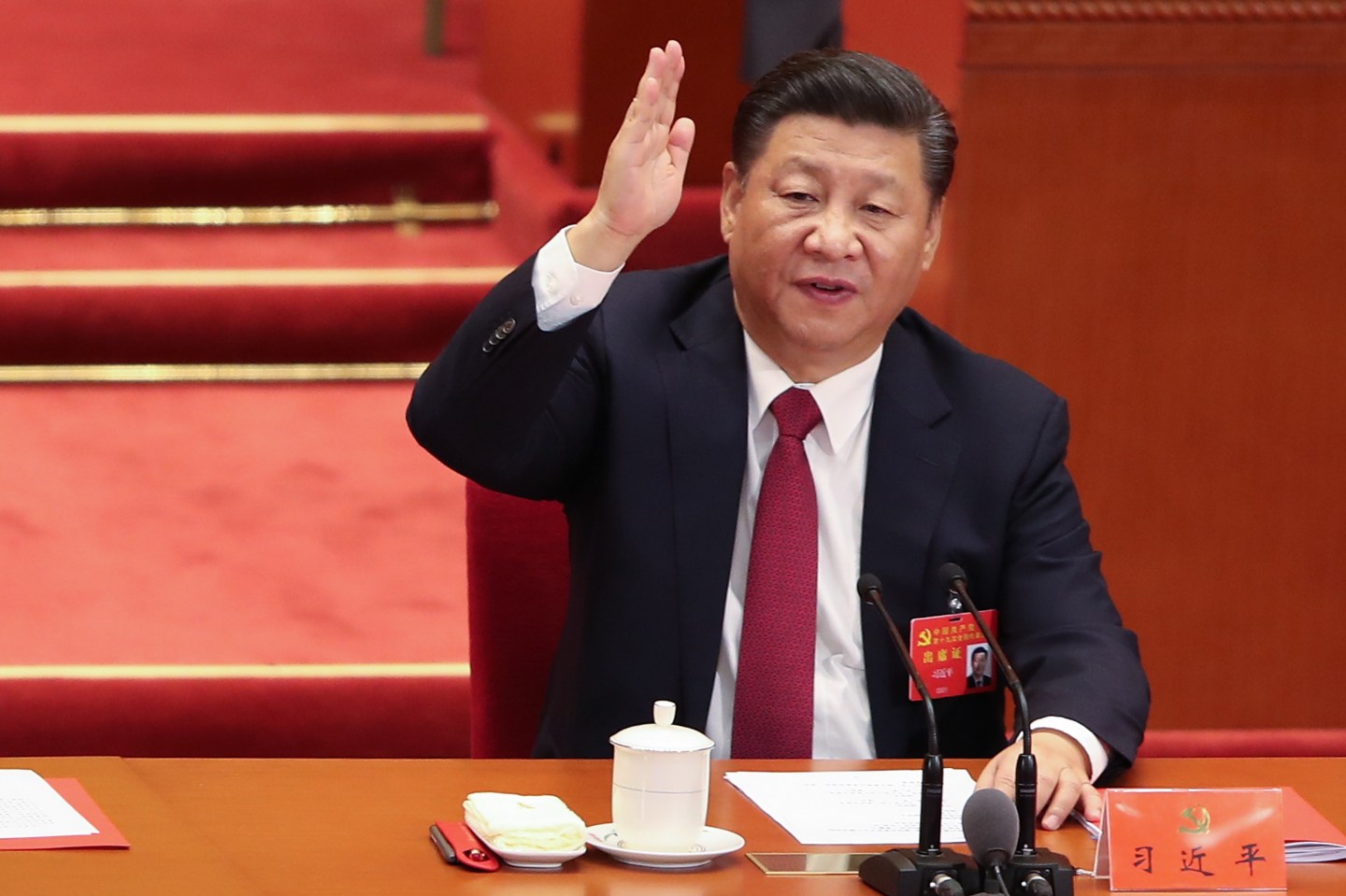 Hong Kong’s Hang Seng Tech Index, home to 30 of China’s largest tech firms, sank 10% Monday on news of Xi locking down another five-year term and squeezing out the latest remnants of dissent in his cabinet. The drop pushed the index to its lowest point since inception in 2020.

The selloff represents a clear—and understandable—signal that investors have little faith in Xi’s strategy for turning China into a self-reliant tech giant, a goal repeatedly outlined in recent years by the autocrat.

Under Xi’s watch, Chinese Communist leadership has devoted billions of dollars to developing advanced technologies, instituted a government crackdown targeting many of the republic’s largest tech firms, and taken a board seat on one of the nation’s highest-profile tech firms. Analysts mostly expect Xi will double down on these policies during his third term, particularly as American policymakers look to undercut China’s tech aspirations through export controls and federal subsidies.

Yet despite the Chinese government’s intervention—or perhaps because of it—the republic’s tech sector isn’t terribly better off than it was before Xi’s ascension.

In some of the most advanced technologies—namely, semiconductor development, cloud computing, and artificial intelligence—China trails behind its cutting-edge Asian neighbors and U.S. rivals. Huge government investments in the chip industry have been particularly disastrous, triggering high-profile investigations and leadership changes.

China’s tech company clampdown appears to have similarly borne minimal fruit. After launching invasive inquiries into its domestic tech leaders and instituting some debilitating regulations over the past two years, Xi’s administration has largely retreated from its aggressive position, with little to show for it.

Meanwhile, Xi’s insistence on a “zero COVID” policy also has ticked off some foreign manufacturers, spawning efforts by Apple, Google, and other firms to move production out of China.

Xi’s tenure has produced some modest victories. China’s electric vehicle and battery industries are humming along at a decent clip. It’s competitive in the quantum computing race, a potential game changer down the line. The republic’s 5G network is nothing to sneeze at.

But on the whole, China’s Western tech competitors can be forgiven for welcoming another five years of Xi leadership. As Charles Mok, a visiting scholar at Stanford University’s Global Digital Policy Incubator, told CNBC earlier this month, China remains “limited politically and ideologically in terms of the strategies” needed to reach its tech goals.

For American policymakers and tech executives, the biggest challenge of the next half-decade likely will entail weakening the Red Dragon without enraging it too much.

The Biden administration has made no secret about its desires to bruise China’s tech sector. In the past six months alone, the U.S. government has dramatically limited China’s access to advanced semiconductors; secured the right to inspect audits of U.S.-listed Chinese companies; and incentivized onshoring of electric vehicle batteries and chips currently manufactured in China. (It remains to be seen how much the federal bureaucracy waters down some of these strategies.)

“From technologies like chips and A.I. to foreign investment, mainly from the West, China is under siege,” Abishur Prakash, a cofounder of the Toronto-based Center for Innovating the Future, told the South China Morning Post. “And this will push Beijing to take aggressive steps in order to continue rising as a global superpower.”

But an emboldened Xi, freed from the political constraints of seeking another term, could finally act through tariffs, foreign pressure campaigns, or—worst-case scenario—military action in Taiwan. Western tech companies should hope Xi duplicates the past decade of domestic misfires, rather than lashing out abroad.

A car crunch in China? Tesla cut the price of its entry-range vehicles in China by up to 9%, stoking fears that the electric-auto maker faces slumping demand in the Asian market. Company officials haven’t commented on the reason for the price drop, but analysts have questioned whether rising competition from Chinese electric vehicle rivals and the slowing global economy will weigh on Tesla sales. Shares of Tesla fell 1% in trading Monday.

Quite a debt load. Twitter’s annual debt payments could balloon from about $50 million to $1 billion if Elon Musk’s leveraged buyout of the social media company goes through, the Wall Street Journal reported Monday. The huge debt liabilities could require deep cuts or unexpectedly large revenue gains at Twitter, which has struggled to turn a profit in recent years. Musk is expected to saddle Twitter with about $13 billion in debt as part of the deal, which must close by Friday to avoid the resumption of acrimonious litigation between the two sides.

Still on the slide. China’s chip imports fell 12% year over year in September, a decline exacerbated by slowing demand for electronics and rising tensions over semiconductors with the U.S., Reuters reported Monday. The reduction in chip imports mirrors similar trends seen throughout the first eight months of the year, when imports fell about 13% year over year. Chinese companies hoarded chips in 2021 amid a global chip shortage and fears about geopolitical strife that could impact the industry.

Rein it in, Mark. A longtime institutional investor in Meta called Monday for the Facebook and Instagram parent to pare back its metaverse spending, Bloomberg reported. Brad Gerstner, CEO of investment firm Altimeter Capital Management, said Meta executives should reduce payroll by 20% and cut its metaverse-related expenses roughly in half, to no more than $5 billion per year. Meta CEO Mark Zuckerberg has placed a multibillion-dollar bet on pioneering new augmented and virtual reality technologies, though some investors worry that the move won’t pay off. Altimeter owns 0.11% of all outstanding Meta shares.

Making their way to West Lafayette. Purdue University has become the place to be lately for tech executives and politicians boiling about the shortage of chipmakers in America. As the Washington Post reported Sunday, high-profile figures in the tech world are regularly visiting the Indiana institution, trying to figure out how to scale its nation-leading semiconductor training program. While federal officials are devoting billions of dollars to onshoring chip production, the U.S. lacks a large semiconductor workforce and hasn’t heeded calls to reduce barriers to immigration for high-skilled foreigners.

By some estimates, the United States needs at least 50,000 new semiconductor engineers over the next five years to staff all of the new factories and research labs that companies have said they plan to build with subsidies from the Chips and Science Act, a number far exceeding current graduation rates nationwide, according to Purdue.

Additionally, legions of engineers in other specialties will be needed to deliver on other White House priorities, including the retooling of auto manufacturing for electric vehicles and the production of technology aimed at reducing U.S. dependence on fossil fuels.

The share of adults getting their news on TikTok has tripled in 2 years as other major social media platforms see declines, by Alena Botros

These two companies you’ve never heard of are worth billions—by turning internet creators into millionaires, by Alexandra Sternlicht

‘The million-dollar question’: CFTC chair on regulating crypto alongside the SEC, by Leo Schwartz

The 11 most promising health tech startups, according to Silicon Valley VCs, by Lucy Brewster

Is Google sending Republican fundraising emails to your spam folder? The RNC thinks so, by Jill Colvin, Michael Liedtke, and the Associated Press

Twitter tries to treat staff to national emotional wellness month as reports swirl that 75% will get sacked by Elon Musk, by Kurt Wagner, Edward Ludlow, Maxwell Adler, and Bloomberg

Should’ve listened to his gut. Turns out that Tim Cook’s instincts were right on the infamous U2 debacle. In his new memoir, Irish rocker Bono says the Apple CEO initially wasn’t a fan of the band’s pitch to plant its new album in every iTunes library, according to an excerpt published Saturday by the Guardian. Bono wrote that Cook disagreed with giving away art for free, arguing that Apple wanted to better compensate musicians in an era of rampant piracy. Cook and his team ultimately went along with the plan, which drew widespread condemnation as a corporate ploy gone awry. To his credit, Bono wrote, Cook took the heat: “If you need any more clues as to why Steve Jobs picked Tim Cook to take on the leadership of Apple, this is one. Probably instinctively conservative, he was ready to try something different to solve a problem. When it went wrong, he was ready to take responsibility.”