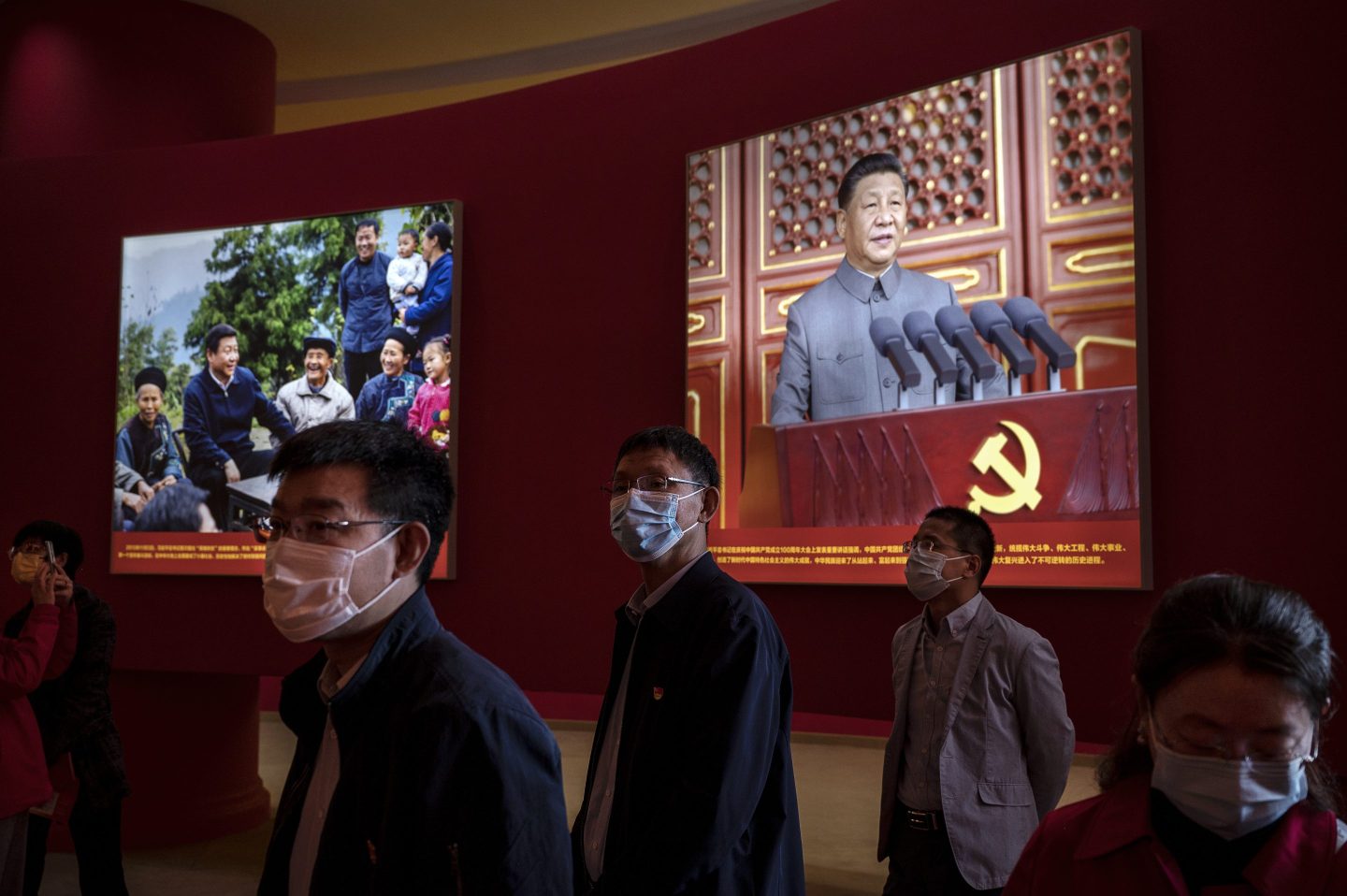 Delegates from the Communist Party of China convene on Sunday to choose its next leader—almost guaranteed to be current President and General Secretary Xi Jinping.
Kevin Frayer—Getty Images

On Sunday, a collection of 2,300 delegates from the Communist Party of China will convene for a weeklong conference to choose China’s next leader. The victor is almost certain to be current President and General Secretary Xi Jinping, who would be the first to serve more than two terms as the Party’s leader since Mao Zedong.

But any celebration of Xi’s third term will be dulled by the reality that exists outside the Great Hall of the People in Tiananmen Square: a flagging economy beset by multiple crises, “including the fallout of its zero-COVID strategy, a faltering property sector, and financial stresses boiling over,” says Eswar Prasad, a senior professor of trade policy at Cornell University.

In the near future, China’s economy is slowing under the weight of Beijing’s strict COVID-zero policy that seeks to eradicate every case of the coronavirus. Routine lockdowns disrupt factory operations and suppress consumer spending. The Caixin/Markit composite purchasing managers index, which measures business sentiment across both manufacturing and services, fell to 48.5 in September from 50.3 a month earlier. (A number below 50 marks a contraction in activity.)

Economists now think that China’s 2022 target of 5.5% GDP growth is impossible so long as COVID-zero remains in place. Investment banks like Morgan Stanley optimistically predict that COVID-zero will end by spring next year. The International Monetary Fund, however, believes a policy shift won’t come until the second half of 2023.

But ending the COVID-zero policy would only be a first step in resolving China’s numerous economic challenges.

The country’s property crisis is “even worse than COVID,” says Alfred Wu, a Chinese politics professor at the National University of Singapore. With COVID, “people stay at home, maybe they have no income, but they still have hope,” he says, whereas property is a “life or death” issue for many families in China.

The collapse of China’s real estate market, initially triggered by a government drive to reduce property developers’ debt, presents a “particular risk” for China’s government, Prasad says. About a third of China’s GDP and 40% of its household wealth are tied up in real estate.

Chinese home prices have declined for 12 months straight, with values down 2.1% in September year on year. Developers reported an 87% decline in half-year profits compared with 2021. Chinese property companies are abandoning housing projects as the money runs out, leading to widespread protests from disgruntled homeowners, who have refused to pay mortgages on never-to-be-completed homes.

The crisis continues to fester. On Thursday, one developer, Cifi Holdings, confirmed that it failed to make a payment on offshore bonds, driving down Chinese property stocks. “Investors’ confidence in China property has totally collapsed,” Raymond Cheng, a property analyst at brokerage CGS-CIMB Securities, told the South China Morning Post.

Chinese officials are scrambling to prop up property values, slashing lending rates, and even buying homes directly from developers. But 85% of Chinese consumers think house prices will continue to fall in the fourth quarter, according to a survey from the People’s Bank of China, the country’s central bank. That would be bad news for local Chinese governments, who rely on land sales for much of their budget. “Some local governments will go bankrupt,” Wu predicts.

In his first and second terms, Xi set bold targets for Chinese research and development to wean the country off foreign-sourced products and corner the market in new technologies. The investment has notched some wins: China now exceeds the U.S. in both quality and quantity of academic research, and Chinese companies provide much of the world’s solar panels.

But the country can’t shake its reliance on advanced technology from increasingly unfriendly governments like the U.S. and Europe. Washington in particular is taking a hard line on technology transfer, with U.S. National Security Adviser Jake Sullivan saying in July that the Biden administration would try to maintain “as large of a lead as possible” against rival countries like China. Last week, the Biden administration blocked the export of advanced chips and chipmaking equipment to China. These controls, the broadest passed in years, threaten to kneecap the country’s chip sector.

Chinese firms are wondering how they can secure the advanced parts they need to keep functioning. On Thursday, the China Semiconductor Industry Association pleaded with U.S. officials to repeal the export controls “for the sake of millions of jobs.”

But perhaps the biggest looming threat to China’s economy is demographics. Even the country’s own demographers now expect the population to start shrinking before 2025, years ahead of earlier predictions.

Last year, Beijing loosened its family-planning rules to allow families to have up to three children. But younger Chinese are increasingly choosing not to have kids at all, citing high childcare costs and exhaustion with the intensity of modern life. Uncertainty around COVID is also prompting families to delay having children: New births hit record lows in 2021.

China’s working-age population is expected to shrink from 986.5 million today to 767 million in 2050, according to the United Nations. A smaller supply of labor will put upward pressure on wages, constraining China’s manufacturing cost advantage. An aging population will strain public coffers, owing to increased health care and eldercare spending.

Officials throughout China have proposed numerous incentives to encourage families to have more children, including tax breaks, childcare subsidies, and even cash handouts. But they may not work.

“Almost no policies have affected the total number of children that people will choose to have,” Stuart Gietel-Basten, professor of demographics at Khalifa University, previously told Fortune.

The economic headwinds facing Xi are evident in China’s trajectory to becoming the world’s No. 1 economy. When Xi started his second term five years ago, some economists predicted that China would become the world’s largest economy as early as 2030. Five years later, economists wonder whether the world’s second largest economy, weighed down by COVID, falling home prices, and demographics, can ever overtake the U.S.