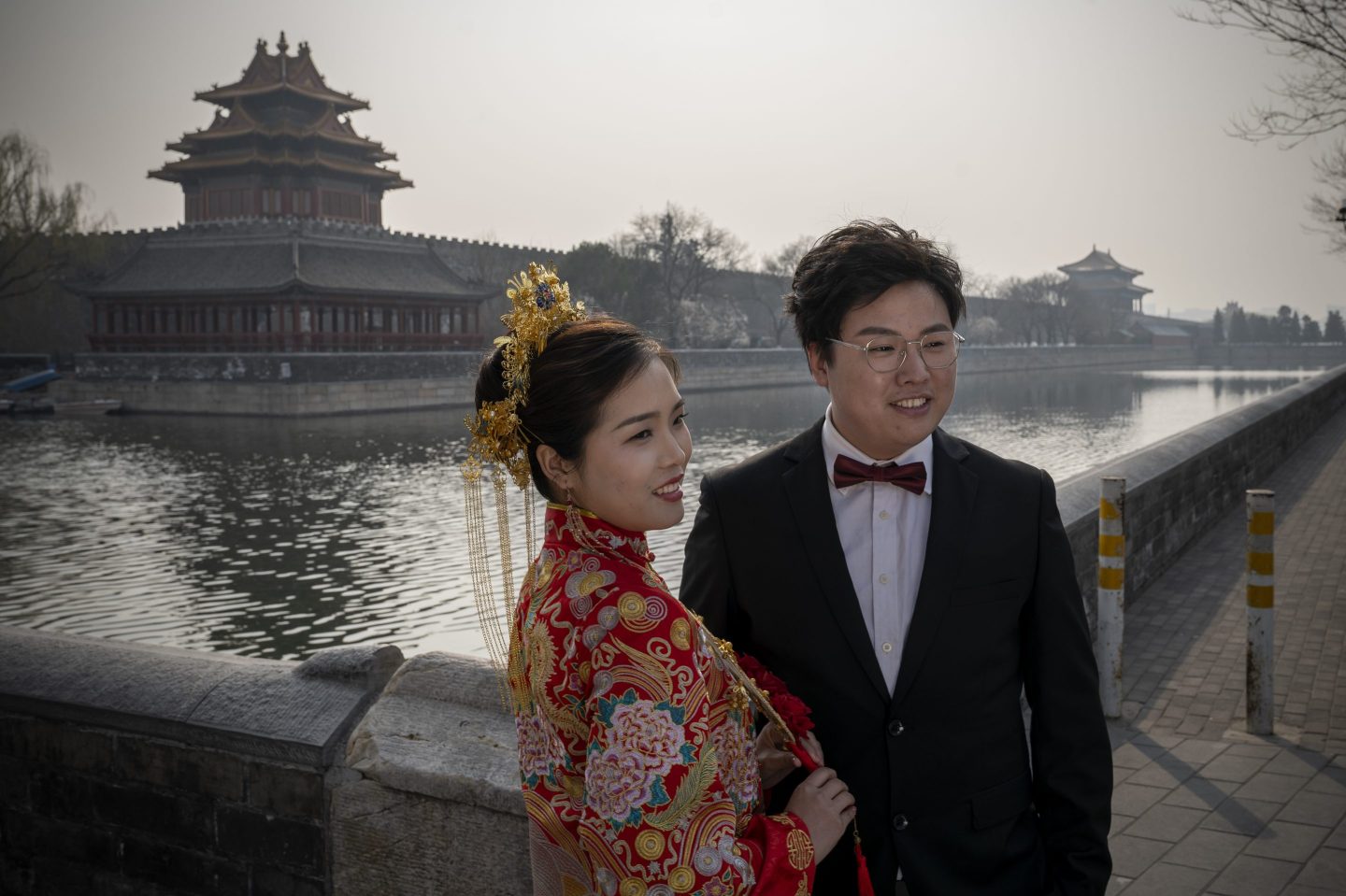 A bride dressed in a traditional Chinese wedding dress and a groom pose for pictures March 23, 2022, in Beijing.
Andrea Verdelli—Getty Images

In Beijing’s Chaoyang district, 32-year-old ‘Peter’ Liu has created his vision of what an ideal millennial life in modern China should look like. He shares his 680-square-foot apartment with his girlfriend, who goes by Cecilia, and their energetic, bread-colored French bulldog named Sweet Potato. According to Liu, he earns “pretty decent” money selling insurance. With their dual income, they earn enough for their day-to-day life, a monthly stipend for his parents who live in northern China, vacations, and trips to their favorite luxury shop, Louis Vuitton.

“We feel it’s not necessary to have kids, so I guess we’re not traditional in that sense. Every time my parents call, we end up arguing. They keep asking when we’re going to give them grandchildren. But Cecilia and I are having a good life now without kids,” Liu told Fortune.

Yet Liu’s lifestyle is becoming commonplace in a country that has traditionally emphasized filial piety—respecting one’s elders like parents and grandparents—with bearing children as one important aspect. But now, Liu and his partner are only one of at least half a million ‘DINK’—double income, no kids—couples in China. The country’s official censuses from 1980 to 2010 show that ‘DINK’ households have grown decade after decade.

As China became richer and more urbanized in the last 40 years, young Chinese began following in the footsteps of their peers in developed countries: having fewer kids and marrying later—if at all. The result? A quickly dwindling Chinese population that has Beijing worried China’s population could shrink and grow old at one of the most critical moments of President Xi Jinping’s nine-year rule.

The generation of Liu’s parents largely had lifestyles that were opposite to their children’s. Liu’s parents both grew up with many siblings and food was often scarce. This generation was defined by their ability to “eat bitter”—a commonly-used Chinese term that refers to enduring hardship.

China’s 400 million millennials—a group larger than the U.S.’s total population—are defined as ‘super consumers’ who wield major spending power. Like many of his peers, Liu is an only child. “We spend what we like, eat what we like, and live how we like,” he says.

In 1979, the Chinese authorities implemented its one-child policy to counter a population boom. China underwent a breakneck pace of development in the next four decades that resulted in a middle-class boom: growing from 3.1% of the population in 2000 to 50.8% in 2018.

But the government’s policies were perhaps too effective. “The one-child policy irreversibly altered the Chinese concept of fertility,” Yi Fuxian, a scientist of obstetrics and gynecology and author of Big Country with an Empty Nest that he wrote for Project Syndicate in July.

Since 1980, Chinese birth rates have consistently declined. The country’s total fertility rate—the number of children born to women during their child-bearing years—plunged from 5.81 in 1970 to 1.18 by 2010 and a record low of 1.16 last year, among the lowest in the world, worrying Beijing about a looming demographic crisis.

Chinese millennials—those born between 1981 and 1996—often grew up as only children accustomed to norms of individualism and consumerism, Jean Wei-Jun Yeung, provost-chair professor of sociology and director of the Center for Family and Population Research at the National University of Singapore (NUS), told Fortune. This generation became more likely to seek personal fulfilment, rather than pursuing happiness from having a child, she says.

Beijing is encouraging citizens to have more kids. It has called on its 96 million Communist Party members to “shoulder the responsibility” of helping China’s population growth, and should have “[no] excuse… to not marry or have children,” a state-run publication wrote last year.

Liu, however, disagrees. “Is it really young people’s national duty, though? I’m proud of how far China has come, but I wouldn’t sacrifice my personal comfort and happiness to have kids. And many of my peers think the same way.”

At the same time, China’s economic rise has also meant skyrocketing costs for homes, education, and childcare, making social mobility and the ability to provide a good education for children more difficult. The cost of raising a child in China reached $309,000 in 2020, compared to $233,000 in the U.S., according to local media reports. China’s hyper-competitive schools and workplaces have given rise to movements like ‘lying flat’ and ‘involution,’ which symbolize young people’s growing rejection of its cutthroat systems. Some young Chinese are rejecting marriage altogether—vowing to stay single—pushing China’s new marriages to a record low of 7.6 million last year and contributing to low birth rates.

“After years… of financial pressures and socially competitive pressures to get ahead, some [in] this generation have had enough,” Zak Dychtwald, author of Young China: How the Restless Generation Will Change Their Country and the World, told Fortune. A decade ago, deciding against having kids in exchange for a better lifestyle was a fringe perspective, he says. But now, Dychtwald says that this “all-consuming centrality of having a child to complete a family [is] slackening their hold” on China’s young people.

Beijing is now hoping to avert a ticking demographic time bomb that could threaten its economic growth and political stability during a critical time for China’s future. The government is trying to act. In 2016, it reversed the one-child policy. In 2018, a professor at a leading Chinese university proposed taxing ‘DINK’ families, which triggered a wave of online criticism. Last year, Beijing introduced a three-child policy and began discouraging abortions. Local governments meanwhile, are offering cash subsidies for couples that have several kids, in addition to perks like discounts on in-vitro fertilization and preferential housing policies.

On Xiaohongshu, a Chinese internet platform that’s a cross between Pinterest and Instagram, users discussed the recent government policies, with one individual calling the measures “useless. The reality is very cruel; I dare not give birth. Couples [with children] can’t compete for jobs with those that don’t have children. Employers prefer those who don’t have kids. You lose money, time, and competitiveness, with children.”

The measures haven’t helped. This year, China’s new births are set to fall to a record low of less than 10 million.

This year, China’s population has already begun its decline—10 years ahead of schedule—according to the United Nations’ 2022 World Population Prospects. By 2050, China’s working-age population will drop to 767 million from nearly 987 million today, according to the U.N. The World Economic Forum wrote in July: This “sets the scene for much lower economic growth, unless productivity advances rapidly. Despite forecasts that this will be the ‘Chinese century,’ China’s population projections suggest influence might move elsewhere.”

Beijing’s policies have had “little effect” in encouraging young people to have kids, partly because the social norms entrenched after 40 years of the one-child policy, Yeung argues. More recent challenges, like China’s strict ‘zero-COVID’ policy that has resulted in harsh lockdowns, coupled with China’s economic downturn and looming property crisis, are all adding to people’s uncertainty about the future, Yeung says.

And the current government measures won’t be enough to reverse China’s demographic tide, Terence Wai Luen Ho, author of Refreshing the Singapore System: Recalibrating Socio-economic Policy for the 21st Century and a public policy associate professor at the NUS, told Fortune. Such financial incentives are inadequate, he says, because Beijing must first rectify the deeper social issues plaguing China, like its lack of work-life balance, and high costs of living, particularly for childcare and education.

For Liu and many other young Chinese like him, rearing children is “more like a luxury than a necessity,” Dychtwald says. Liu agrees, admitting that Sweet Potato, his dog, is as close as he wants to having a kid.