Starlink’s satellite internet business is booming. Why doesn’t the FCC want in? 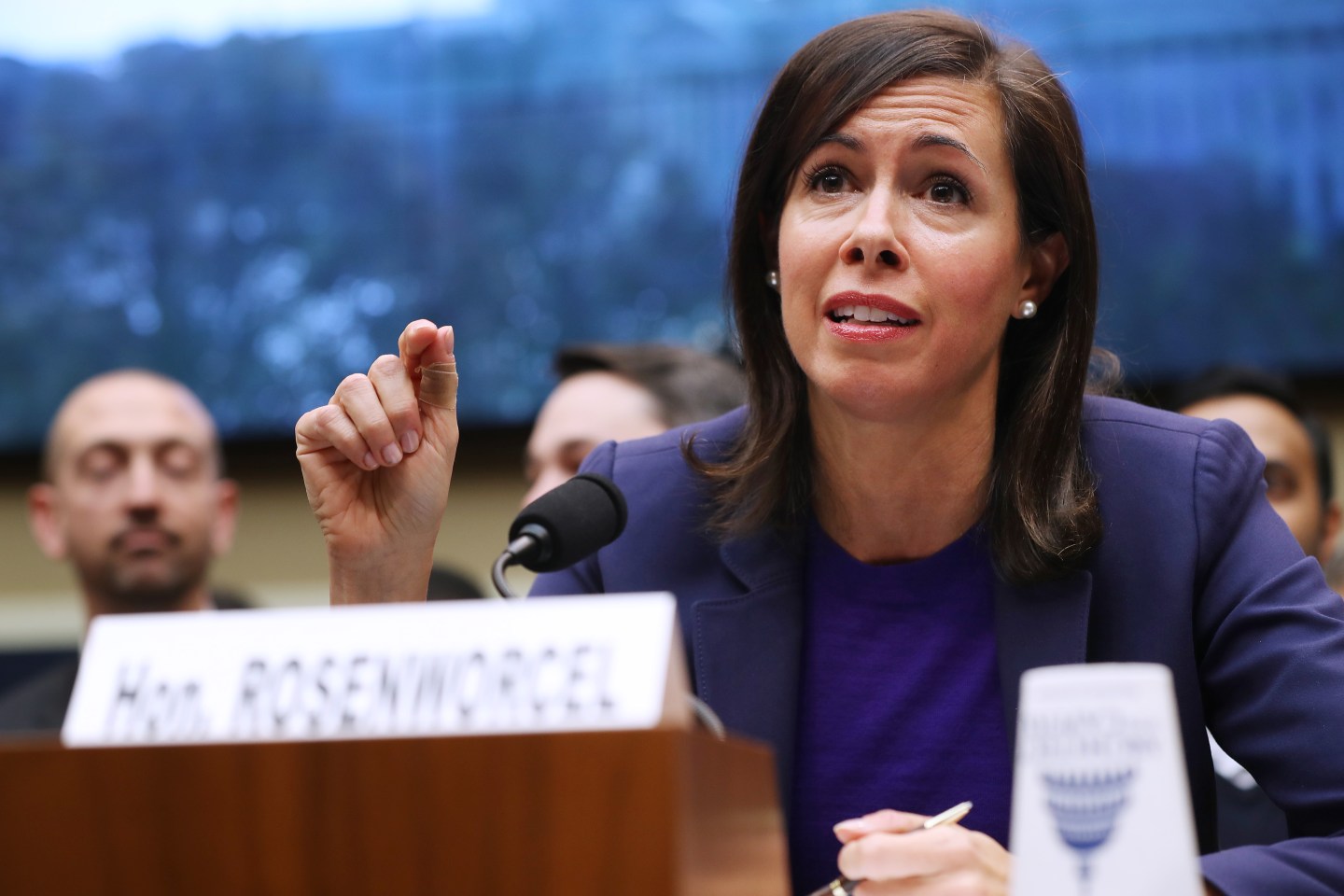 Besieged Ukrainians heralded the service as a vital lifeline in the war-torn nation this spring. Hawaiian Airlines signed on in April to carry Starlink on its transpacific flights. The U.S. Air Force awarded a $1.9 million contract last week to the SpaceX division to provide internet to support military units in Europe and Africa.

The latest affirmation came Tuesday, when Royal Caribbean announced plans to outfit its fleet of 64 cruise ships with Starlink service after receiving “tremendous positive feedback” from guests and crew members after a test run.

Despite the backing of these disparate groups, Starlink still hasn’t won over one deep-pocketed customer: the Federal Communications Commission.

As reported earlier this month, the FCC yanked $886 million in subsidies previously awarded to Starlink to provide high-speed internet to parts of the U.S. with limited or no broadband access. The move delivered a blow to SpaceX’s bottom line and its ability to add capacity across the country.

Starlink parent SpaceX reported in May that the service had about 400,000 subscribers across the world. SpaceX, which also produces and manufactures aerospace technology, has raised $2 billion in private funding this year to push its valuation over $125 billion.

The dichotomy between the FCC’s decision and the burgeoning commercial market for the service raises a natural question: If Starlink is good enough for the war-ravaged Ukrainian people, the U.S. Air Force, and two major travel companies, what’s the FCC’s beef?

In announcing her decision, FCC Chair Jessica Rosenworcel suggested SpaceX made promises about its technology and internet speeds that it couldn’t keep, creating a level of risk that the U.S. government couldn’t accept. An FCC document explaining the decision also noted that data from internet performance metric outfit Ookla showed Starlink speeds “have been declining from the last quarter of 2021 to the second quarter of 2022.”

“Starlink’s technology has real promise,” Rosenworcel said. “But the question before us was whether to publicly subsidize its still developing technology for consumer broadband—which requires that users purchase a $600 dish—with nearly $900 million in universal service funds until 2032.”

But one of the FCC’s four commissioners, Republican Brendan Carr, isn’t convinced by the rationale given by Rosenworcel, an appointee of President Joe Biden. In his own statement released last week, Carr noted that the Ookla performance data shows Starlink speeds “have increased significantly year over year” since the FCC issued its $866 million award in late 2020.

“Particularly given the speeds Starlink is already offering and the pace with which it is continuing to launch satellites, the FCC’s decision offers no reasoned basis for determining that Starlink was incapable of meeting its regulatory obligations,” Carr wrote. “In fact, Starlink is already exceeding those benchmark speeds in other countries where their services are online.”

While Starlink median download speeds in the U.S. have bounced around in recent months, they still clocked in at 90.55 megabits per second in the first quarter of 2022, up 38% year over year. The median speed is more than four times better than satellite internet providers Viasat and HughesNet, and well above the federal minimum broadband speed of 25 mbps (Rosenworcel proposed last month raising the minimum to 100 mbps).

For more context, consider that Starlink’s median U.S. speed topped the performance of all internet providers combined in Australia, Germany, Italy, Mexico, Poland, and the U.K., among others.

Starlink’s median upload speeds also have declined over the past year, falling 33% to 9.33 mbps. However, they’re still significantly better than other satellite internet providers and above the federal broadband minimum of 3 mbps (again, Rosenworcel wants to bump the minimum to 20 mbps). Ookla officials also said they suspect the decline amounts to a “negligible” change for many Starlink users.

SpaceX certainly has some issues to sort out with inconsistent performance. As PCMag noted in a mid-July report, some customers are reporting woefully poor download speeds, prompting concerns that there aren’t enough Starlink satellites in operation.

Yet SpaceX’s record of improvement and commitment to growth—it aims to multiply its current satellite count by more than 10—makes it a worthy candidate for federal investment. So far, Rosenworcel and the FCC haven’t made a strong public case for grounding Starlink.

In full retreat. Snap executives notified employees Tuesday that it plans to cut its workforce by 20% and slash spending on several departments, a reflection of slowing ad revenue growth at the Snapchat parent, Bloomberg reported. In a memo to staff, CEO Evan Spiegel said layoffs were needed after current-quarter revenue growth of 8% fell short of internal projections. Snap also announced Tuesday that two of its top ad executives were leaving the company to join Netflix. Snap shares rose 9% in midday trading Wednesday, though they’re still down 77% year to date.

Opening the books. E-commerce giants Alibaba and JD.com will be subject to the first round of U.S.-led audits of Chinese companies now authorized under a long-negotiated agreement between the two nations, Reuters reported Wednesday. The Public Company Accounting Oversight Board, an American agency responsible for conducting the inquiries, has notified both companies that their financials will be inspected by U.S. regulators in Hong Kong. American and Chinese government officials ended a decade-long standoff last week over access to financial records of Chinese companies listed on U.S. stock exchanges.

Powering down. HP shares slid 7% in midday trading Wednesday after the company trimmed its full-year outlook and saw fiscal third-quarter revenues fall, the Wall Street Journal reported. The PC company joined a chorus of electronics outfits forecasting a slowdown in sales following a pandemic-driven boom over the past two years. HP officials said third-quarter revenue slipped 4% owing to a pullback in consumer spending, while company executives pegged their estimated annual earnings by share at $4.02 to $4.12, down about a quarter-dollar from prior forecasts.

A flailing unicorn. Buy-now-pay-later company Klarna saw its losses triple in the first half of 2022 when compared to the prior year, the latest sign of trouble in the budding industry, CNBC reported. Klarna’s first-half losses totaled about $580 million as the Swedish outfit rapidly expanded in the U.S., the U.K., and several other countries. Klarna laid off about 10% of the company’s workforce in the spring and watched its valuation fall by 85% after its latest investment round.

Overeducated and underemployed. The Chinese government’s crackdown on tech companies caused some collateral damage to the Asian nation’s youngest adults. Bloomberg reported Tuesday that some of China’s new graduates this year will struggle to find jobs in the once-booming tech sector, exacerbating the republic’s youth unemployment woes. Chinese tech companies laid off an estimated 35,000 workers in the second quarter of this year, adding to the glut of aspiring employees in the field following President Xi Jinping’s efforts to curb the power of fast-growing tech firms. While regulators have eased their aggression in recent months, a slowdown in China’s economy has stunted hiring.

Rocked by a series of punishing regulations that froze deal-making and wiped out the once-swaggering industry’s growth, sector leaders from Alibaba Group Holding Ltd. to Tencent Holdings Ltd. and Xiaomi Corp. this year began firing people by the thousands.

Those cutbacks foreshadow a more fundamental shift in the giant industry’s traditional role as the largest and most sought-after employer, with potentially grave consequences. A record of almost 11 million new graduates are expected to flood the labor market this year. With the tech sector no longer offering them as lucrative and exciting a career path as it once did, many will join the jobless ranks in an economy where one in five people between the ages of 16 and 24 are already out of work.

The return-to-office battle will resume after Labor Day. Here’s how employers can bring back workers for good, by Paige McGlauflin

Google worker who opposed contract with Israel quits, claiming retaliation and a climate of silencing pro-Palestinian workers, by Alena Botros

A million-dollar mess-up. Fortune definitely favored this Australian woman, at least for a little bit. A Melbourne resident seeking a $100 refund from Crypto.com’s Australian arm mistakenly received a $10.5 million transfer from the cryptocurrency exchange last year, an error that the outfit didn’t catch for seven months. Now, Crypto.com officials say Thevamanogari Manivel has spent or transferred most of the money, including $1.35 million splurged on a four-bedroom home, and she’s been unresponsive to their inquiries. Australian court officials have issued a judgment in Crypto.com’s favor, which could help the company recoup the assets. The flub purportedly stemmed from a Crypto.com employee entering Manivel’s account number, rather than the refund amount, in a payment field.