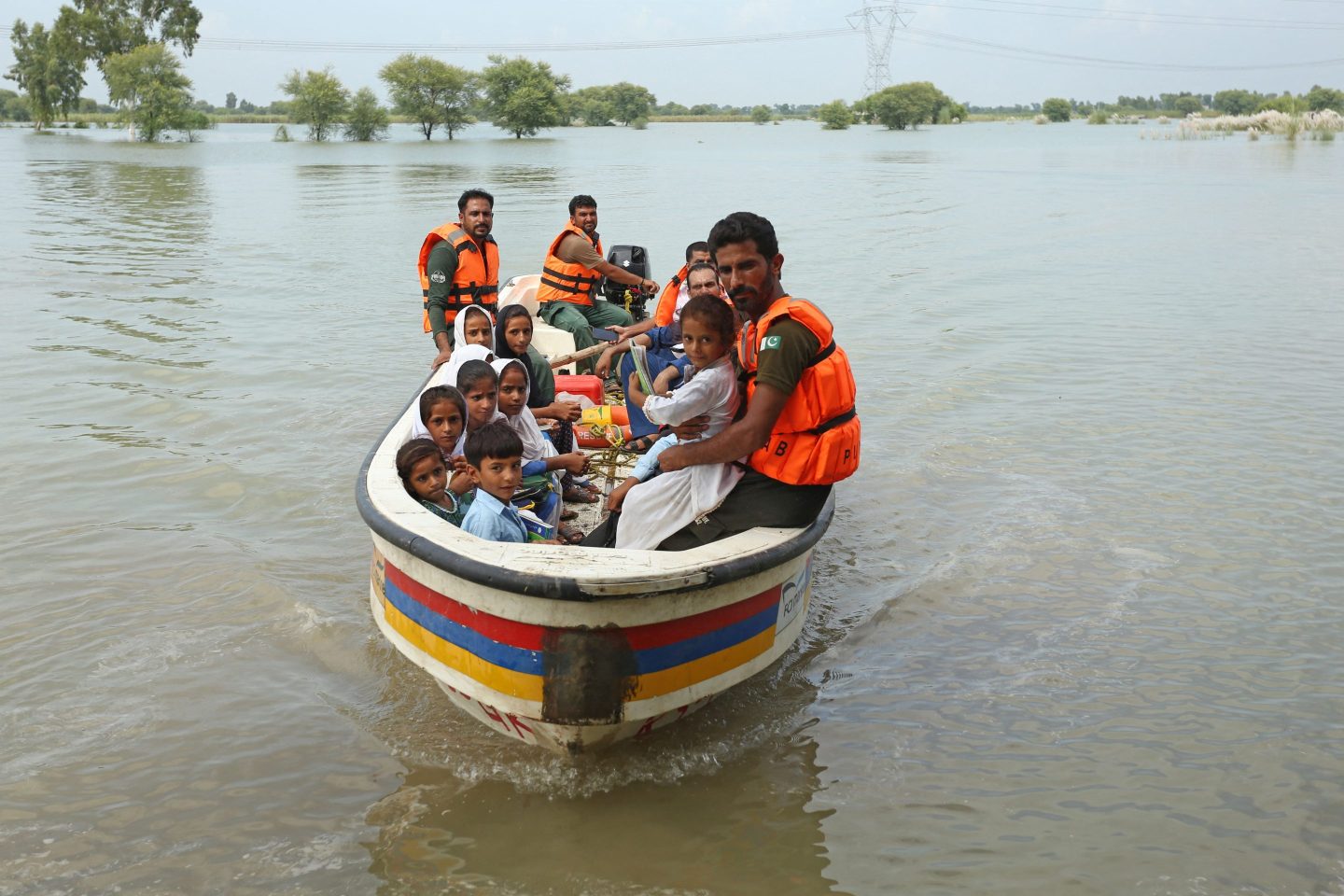 Torrential rainfall is the most obvious perpetrator of the devastating floods sweeping across Pakistan. Starting in April, scorching heat waves extended and intensified the South Asian country’s monsoon season, dumping close to 300% the average seasonal rainfall on the country since June, causing major rivers to break their banks. Officials say the floods have submerged a third of the country, killing over 1,100 people and displacing hundreds of thousands more.

But, high up in the mountains above Pakistan, the prolonged heat also accelerated a devastating flood catalyst that Pakistan is uniquely susceptible to: the rapid melting of giant glaciers.

“We have the largest number of glaciers outside the polar region, and this affects us,” Climate Minister Sherry Rehman told the Associated Press. “Instead of keeping their majesty and preserving them for posterity and nature, we are seeing them melt.”

Nestled beneath the foothills of the Himalayas, north Pakistan is home to 7,532 glaciers that, on average, have melted 10 times as fast in the past decade as they have over the past two centuries. As those glaciers thaw and recede, the meltwater forms lakes, dammed only by rocky debris deposited by the same retreating ice wall. If the dams break, water cascades down the mountain in a raging torrent, demolishing anything in its way.

Of the more than 3,000 glacial lakes glistening high over Pakistan, the United Nations Development Program considers 33 of them “prone” to outburst flooding. As of July, Pakistan had already suffered 16 glacial lake outbursts this year, compared with the normal five or six annually.

Recognizing the danger, Pakistan and the UNDP raised over $43.5 million (paid by the UN-led Green Climate Fund) in 2017 to fund the extension of its Glacial Lake Outburst Flood risk reduction program (GLOF-II) in the country.

GLOF-II, which expands Pakistan’s four-year GLOF pilot project from two districts to 10, is a multipronged initiative that focuses mostly on developing early warning systems by installing cameras to gauge lake volume, improving communication between government agencies and local leaders, and training at-risk communities how to react in case of a flood.

The GLOF-II project delivered a critical success as recently as May, when a glacial lake burst in northern Hunza district, unleashing a flood that demolished a major bridge and destroyed two hydropower projects in a village four kilometers away. According to The Third Pole, the raging water took roughly 15 minutes to reach the town, but authorities (operating without automated systems) had warned villagers a burst was due a day in advance. No one died in the flood.

Yet the onslaught of torrential rain and glacial melts Pakistan has suffered this year showcase the limitations of a project like GLOF-II. According to NGO Germanwatch, Pakistan is the eighth most exposed country to climate change and needs to invest tens of billions more in rebuilding and improving infrastructure to withstand the destructive cycle of extreme heat and extreme floods. Government leaders are calling on wealthy Western polluters to help foot the bill.

“It is highly unfair that a country which contributes less than 1% in global emissions is at the receiving end of the climate catastrophe,” Pakistan Senator Mustafa Nawaz Khokhar said.

Developed economies fell short of their 2009 pledge to finance $100 billion of climate adaptation spending in developing economies per year by 2020. If governments don’t step up, private industry might be forced to pay instead.

On Sunday the Washington Post published a deep dive into the case of a Peruvian farmer suing German energy giant RWE for contributing to global warming that has increased the risk of glacial lake outburst floods in his hometown, Huaraz. The case has stretched on for seven years, but this week German court officials flew to Peru to collect evidence on the ground.

The Post notes that court officials traveling to a foreign country to gather evidence is a “global first for any climate case.” With Pakistan now desperate for ways to rebuild, it might not be the last.

File under “technology will save us.” The market for fan-cooled clothing has quadrupled over the past five years to $120 million in annual sales (a tiny fraction of the overall apparel industry) as retailers push new ways for consumers to cope with rising heat. Japan is leading the trend. The Japanese government recommends fan-assisted clothing, which provides a cooling effect by increasing airflow over the body and accelerating sweat evaporation, as a safety precaution for outdoor workers laboring in extreme heat. For consumers, and workers, a more sensible solution would be to simply stay in the shade. Bloomberg

In 2019, the U.K. government set a target of building 300,000 new homes per year in England (not the rest of the U.K.) by the mid-2020s, to tackle the country’s housing crisis. But a new study published in Ecological Economics warns meeting that target would use up the entirety of the U.K.’s carbon budget—the volume of greenhouse gas the country can emit across all industries as per its Paris Agreement commitments. “England can’t go on building new houses forever, and needs to start thinking about better and more systematic solutions,” the authors write. Guardian

The California Air Resources Board, the Golden State’s air quality regulator, voted to phase out the sale of new gasoline powered cars by 2035, providing a major impetus for automakers to accelerate the rollout of electric vehicles. California is the largest auto market in the U.S., and 13 other states are expected to emulate its new auto regulation. California joins the EU and China in mandating a phaseout of internal combustion engines by the middle of the next decade. NPR

Texas comptroller Glenn Hegar is implementing a 2021 law that requires state pension and school funds to divest from financial groups that the local government says are guilty of “boycot[ting] energy companies.” The state has drawn up a blacklist of asset managers, including BlackRock, Credit Suisse, and UBS, accusing the managers of investing in funds that Texas considers “hostile to fossil fuels.” But the funds are hitting back, claiming Hegar’s list is politicizing ESG. Financial Times

Extreme heat in the U.S., Europe, and China is slamming economies around the world—and making inflation worse by Colin Lodewick

Inside the chaos at Canoo, the zero-revenue, cash-burning EV company that just inked a major deal with Walmart by Jessica Mathews

Last week, I found myself in conversation again with someone who believed they shouldn’t have children because it would be cruel to bring life into a world confronting climate change. They’re not alone. A study on climate anxiety published in The Lancet last December found that 39% of 16- to 25-year-olds (in a sample of 10,000 taken across 10 countries) were “hesitant” to have children because of climate change concerns. But I can’t agree with the thought process. The future is unknown and perilous, but all things considered, humans have never had it better than we do now. We have the resources, tech, and capital to avert complete climate catastrophe. Meanwhile, the only surefire route to extinction is to stop reproducing.