Pakistan flood death toll passes 1,000: ‘Many districts are beginning to look like they’re part of the ocean’ 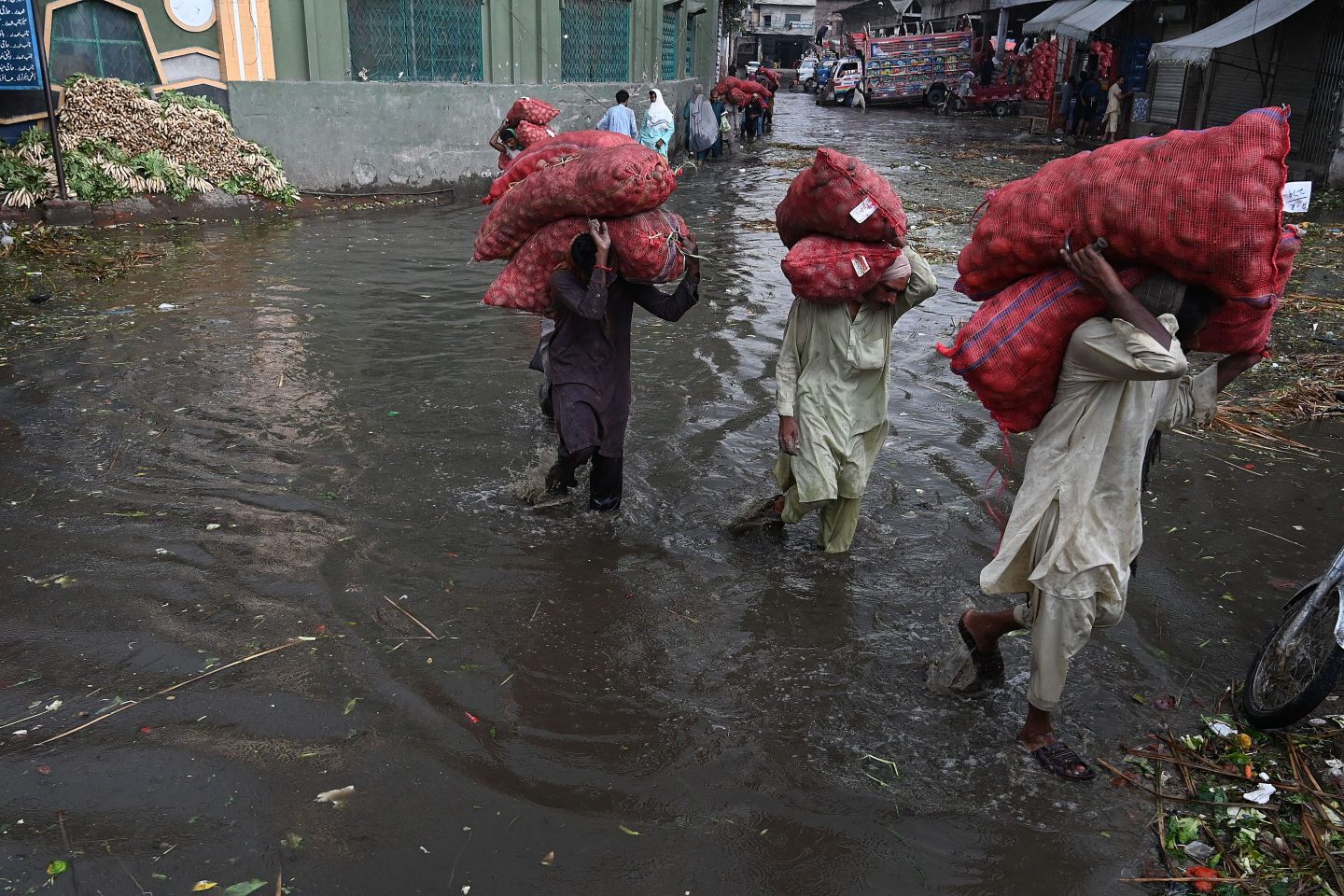 Labourers carry sacks of potato as they wade amid a flooded market in Lahore on August 29, 2022.
Arif Ali—AFP/Getty Images

Flooding in Pakistan from the highest rainfall in more than three decades has killed at least 1,000 people since June and caused more than $10 billion worth of damage.

The extreme weather event, which follows some of the highest recorded temperatures across South Asia, is a “climate catastrophe,” Sherry Rehman, Pakistan’s federal Minister for Climate Change, said in a news interview posted on her Twitter feed.

“Many districts are beginning to look like they’re part of the ocean,” Rehman told German broadcaster DW News. “Our helicopter sorties are not finding dry land to drop rations.” With more than 30 million people affected across Pakistan—the world’s fifth-most populous nation—the navy has been deployed for the first time, she added.

Finance Minister Miftah Ismail said there was no immediate assessment of how badly the various sectors of the economy had been affected and the damage may exceed his $10 billion figure, local newspaper The News International reported.

“I have no money but hopefully some way out will be found,” Ismail told reporters Monday. “Pakistan is drowning. There has been so much damage everywhere.”

Pakistan will allow duty-free imports of vegetables to curb a price hike in the domestic market because of the floods and consider opening a temporary land route with India for the purpose, according to the minister.

Pakistan has permitted trade temporarily with its neighbor in the past.

The natural disaster comes as the government is faced with one of Asia’s fastest inflation rates and is attempting to end a dollar shortage. The International Monetary Fund meets later on Monday and is expected to resume a $6 billion loan program.

It’s also given former premier Imran Khan more political space as he pressures Prime Minister Shehbaz Sharif’s government to dissolve parliament and hold fresh elections. On Monday evening, he’s hosting a telethon to raise funds for flood victims from his support base in the country and among the Pakistani diaspora.

Khan’s political party, Pakistan Tehreek-e-Insaaf, has approached a court for permission to telecast the telethon live, according to local media reports. Khan has held such events in the past, flanked by celebrities working the phones.

The former cricket star reminded his followers that his fight against the government will not stop. Sharif’s administration has been looking at ways to ban Khan’s party.

“Let me make it clear that our real freedom movement will continue along with our flood relief work,” he said in a tweet.

Khan has drawn massive crowds to his rallies since he was ousted in a no-confidence vote in April. His campaign has been paying off lately, with his party winning key by-elections.

Sharif’s administration has sought help from international donors to deal with the intense climate event, which echoes warnings issued by scientists in the 2021 report from the Intergovernmental Panel on Climate Change.

“We have got to stop using the word unprecedented because every time a new precedent is being formed in South Asia,” said Anjal Prakash, research director at the Indian School of Business in India’s Hyderabad and one of the lead authors of the IPCC report. “The impact of warming on Himalayan glaciers, which are retreating very fast, is much faster than we earlier thought.”

Prakash said the high temperatures across the subcontinent that warmed the oceans, are “very very sharply interlinked” to the glacial melt in the Indus river systems in the Himalayas, which have caused the flooding across Pakistan. The losses will force Pakistan to divert more economic resources into rebuilding ahead of global climate talks in Egypt this year.

Rainfall in Pakistan this monsoon season has exceeded levels recorded during the devastating flash floods in 2010, which prompted $4.5 billion in support from the IMF, the United Nations, World Bank and Asian Development Bank, according to a report by Karachi-based JS Global Capital Ltd. That natural disaster prompted Pakistan to introduce a 15% surcharge on all income to fund additional costs for relief, restoration and prospective subsidies for the affected industries.

The swirling flood waters have damaged or submerged millions of acres of farmland, including part of the prized cotton crop, in a country where the agricultural sector accounts for about a quarter of the economy. The provinces of Sindh and Balochistan have been the worst hit so far.

The country’s central bank said last week that heavy rains could severely impact agricultural output. The regulator already expects economic growth to fall from 6% last year to 3% to 4% in the year starting in July.

—With assistance from Kamran Haider.