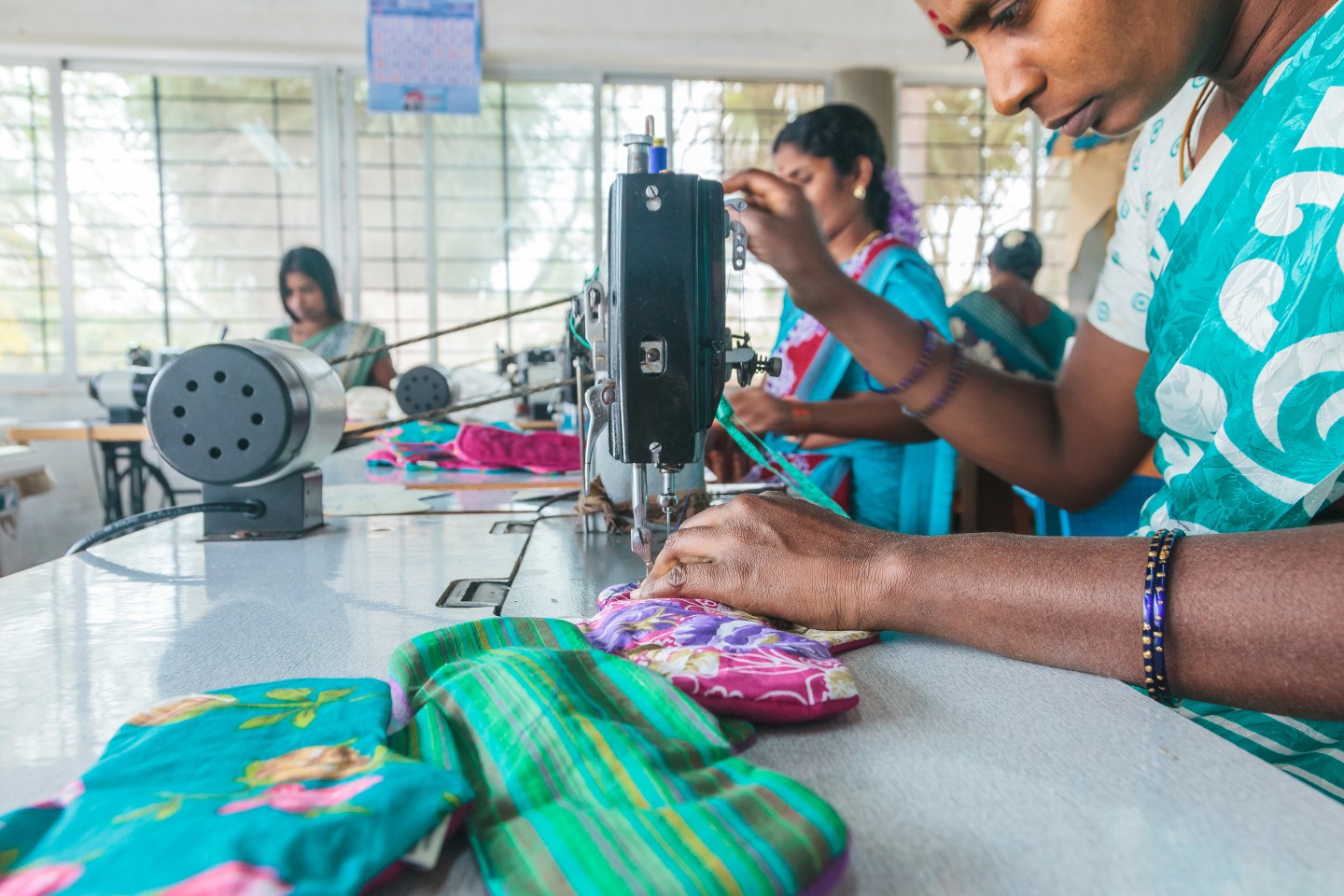 The appetite for a “cleaner” period is growing slowly but steadily across India. With a population of about 400 million menstruating women, India represents a large market for disposable sanitary pads.

The use of pads is a public health win in a nation where women have historically used cloth scraps, mud, and even cow dung to absorb menstrual blood. However, sanitary pads present an environmental waste problem that has prompted a growing movement in favor of alternative products such as reusable menstrual cups. Pads take about 500 to 800 years to decompose fully in landfills, and an estimated 12.3 billion are thrown out each year in India.

Pandemic-induced lockdowns prompted a wave of interest in alternative menstrual hygiene products as women had trouble accessing sanitary products in the world’s second most populous nation.

“Five years ago, when we first started doing menstrual health education workshops for teenage girls across India, reusable pads were an unfamiliar concept. Not so today,” says Anju Bist, who has been called India’s “Pad-Woman” and is cofounder and managing director of Saukhyam Pads, the world’s first reusable menstrual pads made of banana fibers sourced from agro-waste. The company has sold more than 500,000 pads to date in India and other markets, eliminating an estimated 43,750 tons of nonbiodegradable menstrual waste.

The 2018 blockbuster Hindi-language film Padman was a turning point in destigmatizing menstrual health in India. In 2020, Prime Minister Narendra Modi acknowledged the importance of access to sanitary pads in his Independence Day speech, advancing the cause. In a country that boasts a fifth of the world’s youth demographic, social media and WhatsApp support groups have also played an important role in driving this awareness.

“These online spaces offer girls and women access to information and support that their mothers or doctors may not provide, bridging the gap in a society that still thinks inserting tampons or menstrual cups affects virginity,” says Arundati Muralidharan, founder of Menstrual Health Alliance India, who noted that sales of menstrual cups are rising. They are more readily available than ever in Indian urban centers and priced competitively at about $4.

Still, the movement has a ways to go: A recent survey by the Indian government found that about 64% of women in the nation have used pads, and only 0.3% have tried environmentally friendly products such as cups. Reusable products represent only a 1% to 2% share of the overall menstrual hygiene market, and the top pad makers in the country, including Johnson & Johnson and Procter & Gamble, have yet to introduce reusable menstrual hygiene products.

A ways to go

There are significant cultural and commercial obstacles in the way. For centuries, the topic of menstruation in Indian society has been shrouded in shame and taboo, making it difficult for women to access information about good menstrual hygiene. Disposable pads have also been hailed as a sanitary alternative to more traditional methods.

“The last decade has seen a concerted push towards menstrual hygiene education by nongovernmental organizations and government agencies, in the process making the disposable sanitary pad the gold standard for menstrual hygiene in India and other low- and middle-income countries,” Muralidharan says.

“The mainstream message is dominated by a singular narrative that celebrates the convenience and affordability of disposable sanitary napkins without factoring in the potential individual health risks and collective environmental impact,” Walkling says. “There needs to be a holistic narrative that truly educates women about the advantages and disadvantages of all menstrual hygiene products in the marketplace so they can feel emboldened to make an informed choice that’s right for them.”

Ironically, Indian women had a fairly sustainable approach to menstrual hygiene before the introduction of disposable products from abroad. They have used cloth for centuries, and many continue to do so. Bist says that cloth pads hearken back to India’s deep-rooted tradition of reducing waste and reusing materials wherever possible.

Still, disposable pads offer convenience and benefits that may make them difficult to eliminate.

Sahil Dharia, founder and CEO of Soothe Healthcare, whose flagship feminine hygiene brand, Paree, is the latest homegrown entrant in India’s booming personal hygiene segment, says that the potential environmental impact from incorrect waste disposal and plastic microparticles is “an issue,” but that it should be considered alongside the overall economic and societal “net benefit” generated from the adoption of sanitary napkins in India.

“Currently 23% of girls in India drop out of school at menarche, and almost 75,000 women in India die of cervical cancer every year. The more glaring concern for me is the mortality, disease burden, lost productivity—all of which the use of sanitary napkins mitigates,” Dharia says.

Recognizing shifting consumer sentiment, Paree launched a menstrual cup in June to cater to, as Dharia puts it, the “woke urban Indian woman.” As part of its corporate responsibility efforts, its parent company also voluntarily recycles 9% more plastic than it uses in its manufacturing, which Dharia says exceeds the amount required by Indian law.

“As a responsible company, we believe now is the time to invest in new products and packaging materials that are better for our environment,” he notes.

Until the pendulum swings clearly in favor of environmentally friendly period care products, menstrual waste will continue to be an issue in India. Besides an overwhelming civic push to install purpose-built sanitary pad incinerators, there is little governmental or private will to come up with sustainable menstrual waste management solutions.

For reusable or compostable sanitary pads to become more mainstream, companies in that space could benefit from certification and defined manufacturing standards, something Muralidharan is advocating for along with cloth-pad manufacturers and promoters. She notes that some mainstream brands have tried to market themselves as eco-friendly when they are not, and that establishing standards for what makes a product sustainable could help consumers tell the difference.

Companies also need to manufacture at scale to bring down the cost of products, something Bist is optimistic will happen.

“We are embarking now on a bold new mission of setting up production centers across the country over the next few years,” Bist said. “This will not only provide employment to thousands of women but also help make reusables much more mainstream.”