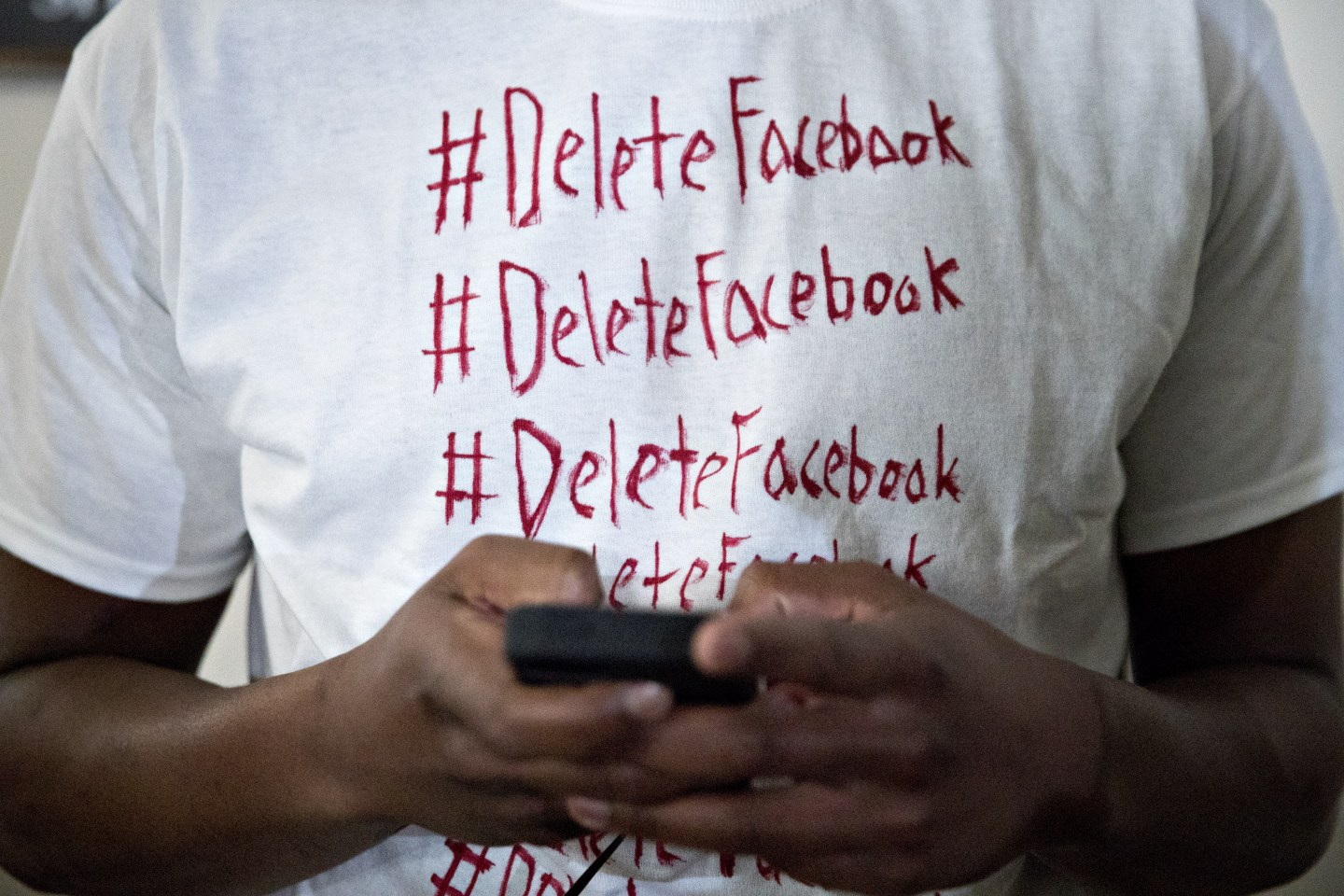 At a moment when Meta is clinging to every last user of its ubiquitous apps, the last thing Mark Zuckerberg and company want to see is #deletefacebook trending.

Yet that’s what happened Tuesday following the publication of a viral story by Vice, which detailed the strange case of a Nebraska teen, her mother, an apparently aborted fetus, and the social media giant. And while the ultimate impact of the hashtag on Meta’s bottom line likely will be minimal at most, it’s worth examining what this latest privacy-related episode does—and doesn’t—say about the under-siege tech titan in a post–Roe v. Wade world.

For background: The Vice article tells of a police investigation into a 17-year-old girl and her 41-year-old mother in rural Nebraska. Acting on some kind of tip—the provenance is unclear—detectives started poking around in April on claims that the teen gave birth to a stillborn child, buried the child’s body, and told unnamed individuals that they needed to dig up the body and burn it.

During interviews with police, the teen and her mother corroborated the essential details of the tip—though they claimed that the child’s death resulted from a miscarriage. In a detail crucial to the story, the teen scrolled through her Facebook Messenger account and showed it to the police in response to a question about when the purported miscarriage occurred.

Following the interviews, investigators sought and obtained search warrants for Facebook Messenger data from accounts belonging to the teen and her mother. Within the documents provided by Meta, detectives found messages in which the teen and her mother discussed terminating the pregnancy by using oral abortifacients.

Police used these messages, in large part, as the basis for a subsequent search warrant seeking records and messages that might show purchases of miscarriage-inducing medications. By that time, medical officials had determined the teen’s pregnancy was 23 weeks along—past Nebraska’s 20-week limit for legal abortions. (Notably, the case was investigated before the U.S. Supreme Court’s ruling that overturned Roe v. Wade.)

Prosecutors ultimately charged the mother with five crimes, including one felony related to performing an abortion. The teen is being tried as an adult on three charges related to hiding the child’s body and making false statements.

So, with all that in mind, what does this case tell us about Meta?

First and foremost: The company is in a difficult bind when it comes to abortion and the police.

The #deletefacebook hashtag pinged around the internet because pro–abortion-rights advocates argued the episode shows Meta will be complicit in the unwarranted prosecutions of women exercising what should be a constitutional right.

Yet in this case, it’s hard to see where Meta went wrong. Investigators served Meta with a legally obtained warrant—one that never mentioned an investigation into possible abortion-related charges, as Meta officials have noted—and complied as expected. The warrant was not a baseless fishing expedition, but rather rooted in investigators’ knowledge of the suspects’ use of Facebook’s messaging tool. Meta’s lawyers could, in theory, challenge such warrants in court, but any such grounds for an appeal likely would be thin at best.

A second lesson: End-to-end encryption as a default on Facebook and Instagram can’t come soon enough for Meta.

The proliferation of end-to-end encryption, which makes messages viewable only to sender and recipient, could dramatically reduce Meta’s responsibility when it comes to cases akin to the Nebraska investigation. Apple, Signal, and Meta-owned WhatsApp already employ end-to-end encryption with relatively little fuss from the public and global policymakers. Meta offers end-to-end messaging encryption on Facebook and Instagram as an option, but it’s not a default feature.

As former Meta security official David Thiel convincingly wrote in Wired late last year, expansive end-to-end encryption on Facebook and Instagram raises numerous safety concerns, given that these platforms offer far more than stand-alone messaging services. Still, Meta officials have said they plan to make end-to-end encryption the default on both platforms sometime in 2023—and if they can get it right, that should quell abortion-related #deletefacebook campaigns. Law enforcement could still get a warrant to search a suspect’s phone, but end-to-end encryption would effectively eliminate Meta’s involvement in any of the proceedings.

A final takeaway: Meta continues to get caught flat-footed on this issue.

While Meta has been the victim of inaccurate news coverage and social media posts on this case—the teen is not being prosecuted on abortion-related charges, as some headlines suggest—its handling of this topic has left much to be desired. Since the Supreme Court’s ruling, the company has been conspicuously quiet on how it will process abortion-related warrants and law enforcement requests. Its seven-sentence statement issued Tuesday following publication of the Vice article followed in the same vein, offering no acknowledgment of the larger privacy-related questions at hand.

Meta finds itself in a lose-lose situation at the moment. The coming months, however, offer an opportunity for the company to stem some of the public anger—and perhaps reduce the number of deleted Facebook accounts in the process.

Break in case of emergency. Tesla CEO Elon Musk recently sold $6.9 billion worth of shares in the electric-auto maker, a purportedly preemptive move made to protect the company’s stock price amid his legal battle over buying Twitter, Bloomberg reported Tuesday. In a tweet, Musk said he shed the shares “to avoid an emergency sale of Tesla stock” in the event that he’s forced to acquire Twitter and some equity partners renege on their investment in the purchase. Musk is trying to back out of a deal to buy Twitter for $44 billion, arguing that the social media company inflated its value by understating the prevalence of spam bot accounts on the platform.

Selling out to Saudi Arabia. A federal jury convicted a former Twitter employee Tuesday on charges related to spying on the company’s users in exchange for lucrative payments from the Saudi Arabian government, the New York Times reported. Ahmad Abouammo, who managed media partnerships for Twitter in the Middle East and North Africa, was found guilty on six counts and acquitted on five counts in the case. Prosecutors alleged Abouammo received hundreds of thousands of dollars and an expensive watch after providing Twitter data on political dissidents to Saudi officials.

Green with anger. Alphabet’s Google on Tuesday escalated its feud with Apple over the iPhone maker’s text messaging service, calling the rival company’s practices “outdated” and “broken.” Google unveiled a website dedicated to bashing Apple’s rejection of the standard messaging technology Rich Communication Services, as well as its refusal to incorporate several iMessage features in text exchanges with Android phones. Texts sent from Android devices to iPhones show up in green bubbles, rather than the blue bubbles depicting conversations between iPhone users, a quirk that has come to represent larger tensions between the two companies over messaging compatibility.

Focus on the big picture. The yearlong negotiations over $52 billion in semiconductor subsidies took on greater urgency when automotive companies and electronics manufacturers couldn’t scrape together enough chips to meet demand for their products. But now, with the ink drying on the so-called CHIPS-Plus bill, the need is suddenly looking less severe. As Fortune’s Nicholas Gordon reported Wednesday, the long-awaited signing of federal support for semiconductor manufacturers arrived this week at an inopportune time for backers of the bill. Top chipmakers Micron, Nvidia, and Intel, among others, reported dreary forecasts for chip demand in the second half of 2022. While there might be a short-term dip in chip needs, the legislation is designed to boost domestic chip manufacturing for decades to come, helping reduce America’s reliance on foreign fabricators.

For much of the COVID pandemic, semiconductors—tiny chips that power not just computers and smartphones, but cars, home appliances, and countless other electronic devices—were in short supply, as stuck-at-home consumers bought more devices to get them through lockdown. The shortage paralyzed manufacturing, but also led to record profits for chipmaking companies.

But now chip CEOs are worried that an oversupply of chips will drag down sales and profits for the rest of 2022 and into 2023. Consumers, returning to normal life in this stage of the pandemic and worried about inflation, are buying fewer consumer electronic devices, lowering demand for the semiconductors that power them.

Meta’s Susan Li will join a growing group of Fortune 500 CFOs under 40, by Sheryl Estrada

Coinbase’s near-term outlook is ‘still grim,’ JPMorgan says, while BofA is more positive about firm’s ability to face crypto winter, by Will Canny and CoinDesk

VC funding is drying up. Here’s a four-time founder’s guide to surviving a market downturn, by Peter Pezaris

A new breed of EV. If you look at the Smart car and say, “Nah, too big and bulky for me,” the Nimbus One might put you on cloud nine. As Fortune editor and Data Sheet overseer Alexei Oreskovic reported Tuesday, a new prototype from mobility startup Nimbus brings together the best features of an automobile, motorcycle, and golf cart into one strange vehicle. The Nimbus One is a fully enclosed, three-wheel, two-seat, battery-powered capsule capable of hitting 50 miles per hour and running for 93 miles. Two of the most far-out features: It tilts as you turn, just like a motorcycle, and can display preprogrammed messages on the front and rear exterior. Nimbus hopes to start selling its first rides in September 2023, with a target price of under $10,000.