Gamers are turning off their PlayStation and Xbox consoles. Why Wall Street isn’t too worried yet 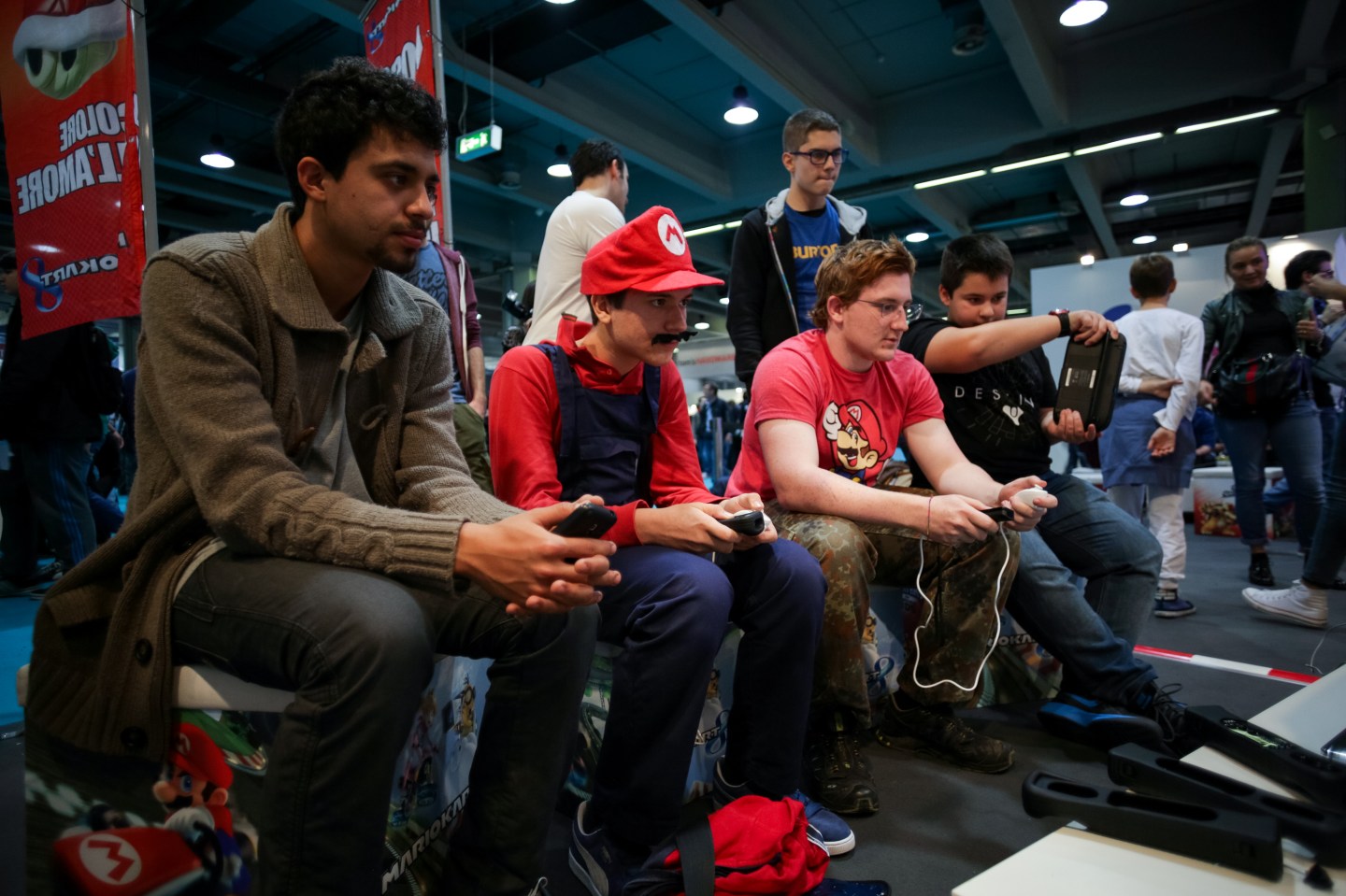 Microsoft’s move in January to spend a stupendous $68.7 billion on Activision Blizzard was supposed to signal a golden era dawning for the video game sector.

In the months since, though, the industry’s halo has lost a bit of luster.

Microsoft and Sony released earnings last week that suggest there’s undeniable softness in the sector—at least in the short term—after a pandemic-driven boom over the prior two years. The results mirror recent reports finding a slowdown in video game spending and engagement in the first half of 2022, potentially putting the industry on track for a rare year of contraction.

The recent semi-swoon has Wall Street ever-so-slightly on edge about the industry’s immediate prospects—even if it remains bullish on the long-term outlook.

The results were even more grim Friday evening for PlayStation parent Sony, with the Japanese giant reporting a 12% year-over-year quarterly drop in game and network service revenue and a 31% fall in the unit’s operating income. Sony CFO Hiroki Totoki said that players spent 15% less time on PlayStation products in the quarter compared to the previous year—“a much lower engagement level than we anticipated in our previous forecast.”

Sony shares fell as much as 7% on the Tokyo exchange Monday, though they rebounded to close at a mere 3% dip.

Several other video game companies are scheduled to report earnings over the next 10 days, including Activision Blizzard (Monday after the bell), Electronic Arts (Tuesday), Nintendo (Wednesday), and Take-Two Interactive (Aug. 8).

Video game executives are hopeful the second-quarter stupor stems from an unfortunate confluence of transitory events, including: a post-pandemic return to outside-the-home activities; a dearth of highly-anticipated title releases over the past few months; a pullback in consumer spending due to high inflation rates; and supply chain snags stunting console manufacturing.

Industry analysts, however, expect the doldrums will extend a bit longer.

Ampere Analysis forecasters predicted in early July that global gaming revenue will slip by 1% this year, proving that “the idea that the games market is ‘recession proof’ is a fallacy.”

Mat Piscatella, a video games industry analyst at market research firm NPD, forecasts that U.S. video game spending will fall 9% this year after rising 40% between 2019 and 2021.

“There are many known unknowns when trying to predict what’s next, and a list of unknown unknowns that may be more extensive,” Piscatella wrote. “In the short-term, this means likely declines, uncertainty, and turbulence. While in the long-term, the growth prospects of the video game space remain as strong as they’ve ever been.”

The consolidation of industry heavy-hitters should hasten the shift toward cloud-based gaming and Netflix-like subscription services, a potential boon for companies like Microsoft and Sony. And while mobile gaming continues to gobble up market share, there’s plenty of revenue to go around. PwC forecasts that global console game revenue will rise 20% between 2022 and 2026, eventually hitting $42.2 billion, as younger generations keep gravitating toward the space.

“For the mid-to-long-term growth and trends, for now, we don’t have any serious concerns,” Totoki said.

So while players might be pressing pause for now, it’s certainly nothing close to game over for the industry.

Big Tech scores a win. A major antitrust bill opposed by Amazon, Alphabet, and other dominant tech companies won’t get a vote in the Senate this week, putting its long-term prospects in doubt, Axios reported. U.S. Sen. Amy Klobuchar, a Minnesota Democrat and the leading sponsor of the American Innovation and Choice Online Act, said Saturday that her bill is on the backburner in Congress amid legislative wrangling over a last-minute spending and tax deal reached last week. The world’s largest tech firms lobbied against the legislation, which would bar companies from favoring their own products on digital platforms they operate, among other provisions.

Welcoming an audit? Chinese tech conglomerate Alibaba said Monday that it will “strive to maintain its listing status” on the New York Stock Exchange after U.S. regulators took an early step toward possibly delisting the firm, Barron’s reported. The comment follows Alibaba’s addition Friday to the Securities and Exchange Commission’s list of companies at risk of delisting due to concerns about its adherence to auditing requirements. Alibaba’s stock price tumbled 11% on Friday and slid another 1% in mid-day trading Monday.

Break out the suggestion box. Alphabet CEO Sundar Pichai told Google employees last week that the company has “real concerns that our productivity as a whole is not where it needs to be” relative to its workforce size, CNBC reported Sunday. The comments came as Alphabet launched an efficiency endeavor called Simplicity Sprint, which involves crowdsourcing ideas for bringing better products to market at a faster rate. Pichai announced in mid-July that Google will slow its pace of hiring and investments through 2023, citing global economic uncertainty.

Back with a SPAC. Tech storage and infrastructure firm W3BCLOUD announced Monday that it plans to go public through a blank-check deal that will value the company at $1.25 billion, Reuters reported. W3BCLOUD, which offers its products and services to companies building the foundation of so-called Web3 technology, is a joint venture of chipmaker AMD and blockchain developer ConsenSys. The special purchase acquisition company agreement follows a broad pullback in black-check deals over the past several months, as investors gravitate toward more-established, profitable firms.

Worst is yet to come? The major stock indices might be approaching their respective bottoms, but the venture capital pain is likely just beginning. The Financial Times reported that some VC firms believe the industry remains stuck in a state of semi-denial, failing to fully grasp the imminent onslaught. While several firms have slashed valuations and seen stock prices tank, particularly in the fintech and blockchain sectors, a prolonged economic downturn could lead to serious problems at companies that benefited from a huge influx of venture capital in 2021.

Venture capital’s deferred date with reality, when it comes, will be a watershed moment for the start-up world. Investors of all stripes have crashed the clubby world of VC in recent years in pursuit of companies promising higher growth rates than those available on the public stock market.

Much of that investment poured in last year, as the valuations of private start-ups were hitting a peak. Hedge funds, private equity firms, sovereign wealth funds, corporate VCs and mutual funds between them supplied two-thirds of all the money that went into venture investing globally last year, according to data provider PitchBook.

If those bets sour, it could lead to a retreat by many of the newcomers drawn to venture investing. And that, in turn, could deliver a shock to a tech start-up world that has grown used to ever-increasing amounts of capital.

The Ethereum ‘merge’ is coming: What competitors Solana, Avalanche, and Tezos think of the upgrade, by Taylor Locke

The Welshman who accidentally threw out 8,000 Bitcoin in 2013 is mounting an $11 million campaign to get it back, by Chris Morris

Google’s AI chatbot—sentient and similar to ‘a kid that happened to know physics’—is also racist and biased, fired engineer contends, by Erin Prater

We can have effective crypto regulation without stifling innovation. Here’s how, by Matt Van Buskirk

Gone in a flash. The company tied to the world’s fastest man has skedaddled out of town. TechCrunch reported Sunday that Bolt Mobility, the micromobility startup co-founded by Jamaican sprinter and Olympic gold medalist Usain Bolt, has abandoned operations in at least five U.S. cities and gone off-the-grid. Public officials in several cities said Bolt left behind hundreds of e-bikes and other equipment after a short-lived venture into their neighborhoods, with little more than a cursory heads-up about its retreat. TechCrunch also couldn’t track down anyone from the company, which was said to have raised more than $40 million in funding. Bolt’s social media presence also has gone dark since mid-June, suggesting the once-promising startup has run its last race.